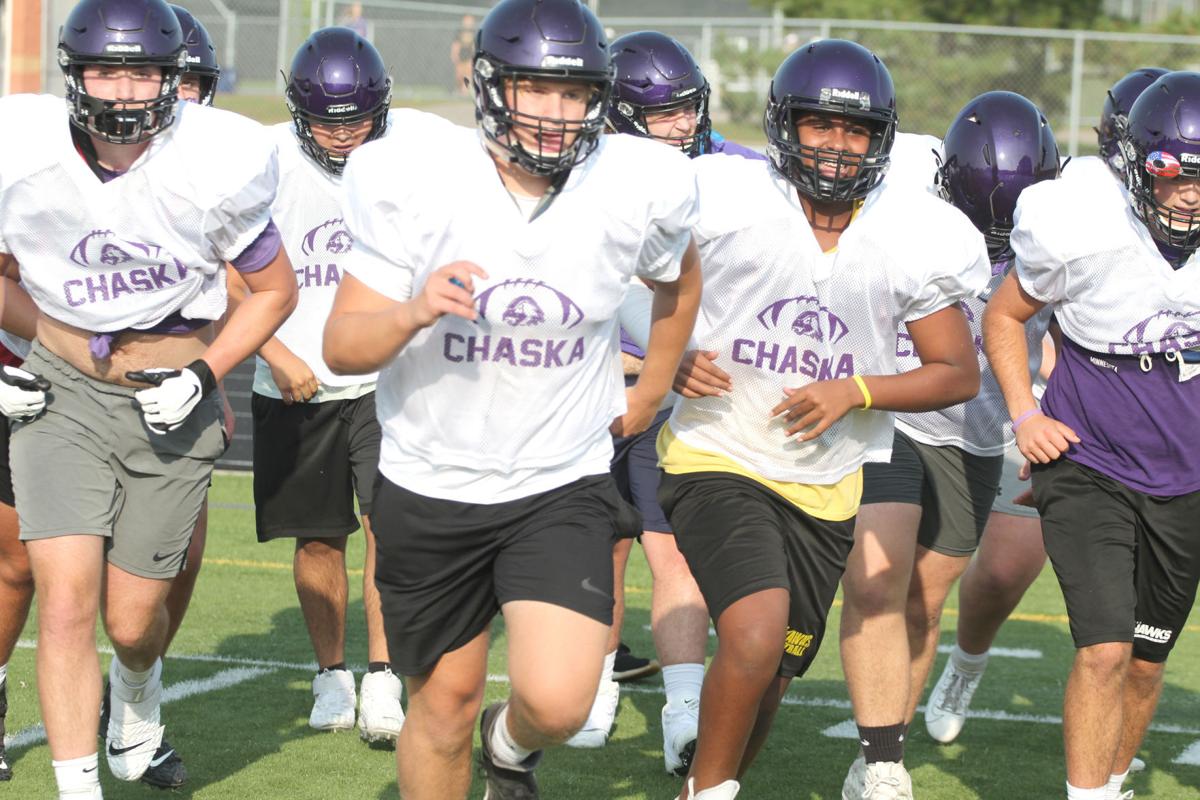 Chaska linemen head off the field for a water break midway through a training session Sept. 22 just hours after the Minnesota State High School League announced football and volleyball will return to action beginning Sept. 28. 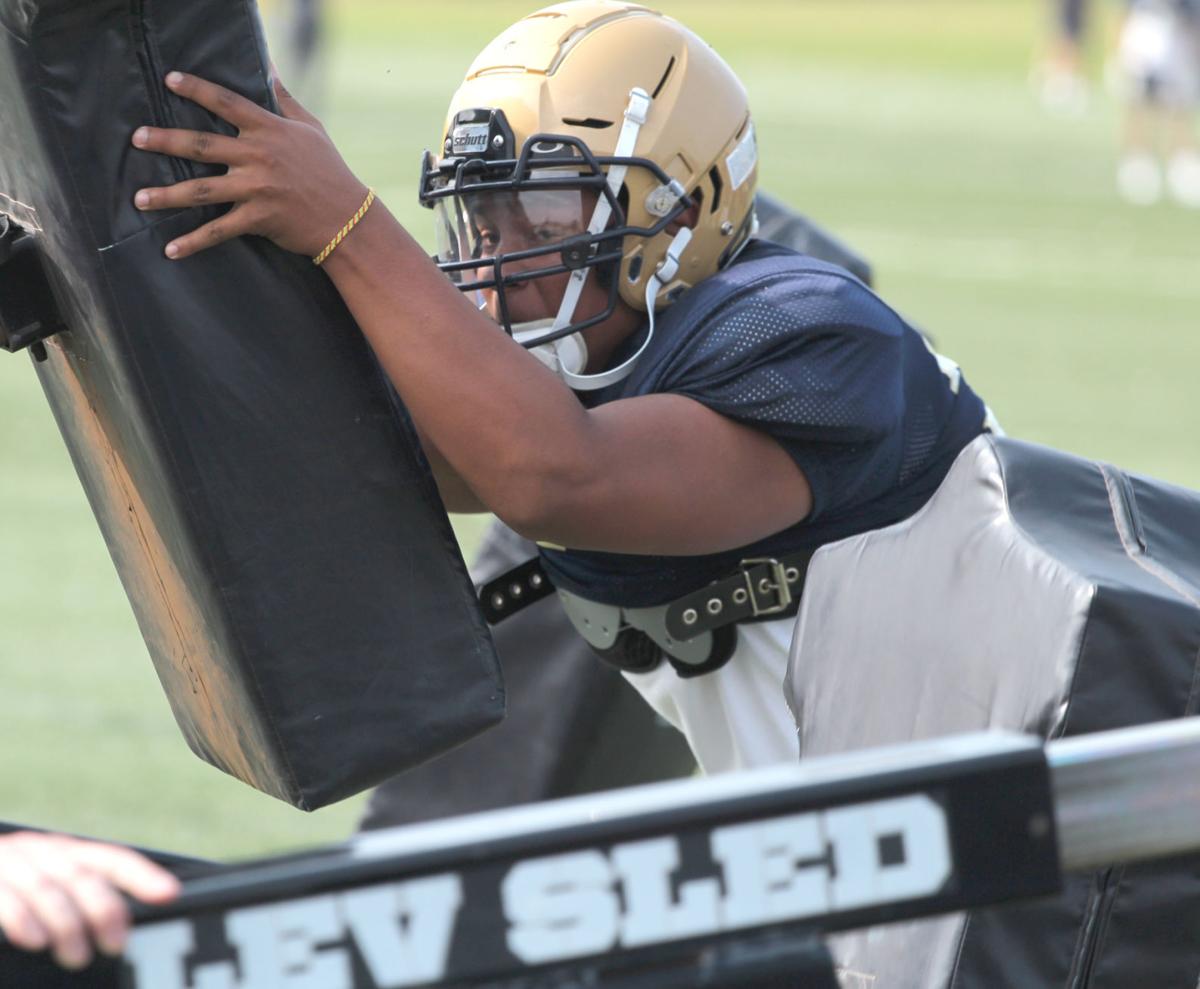 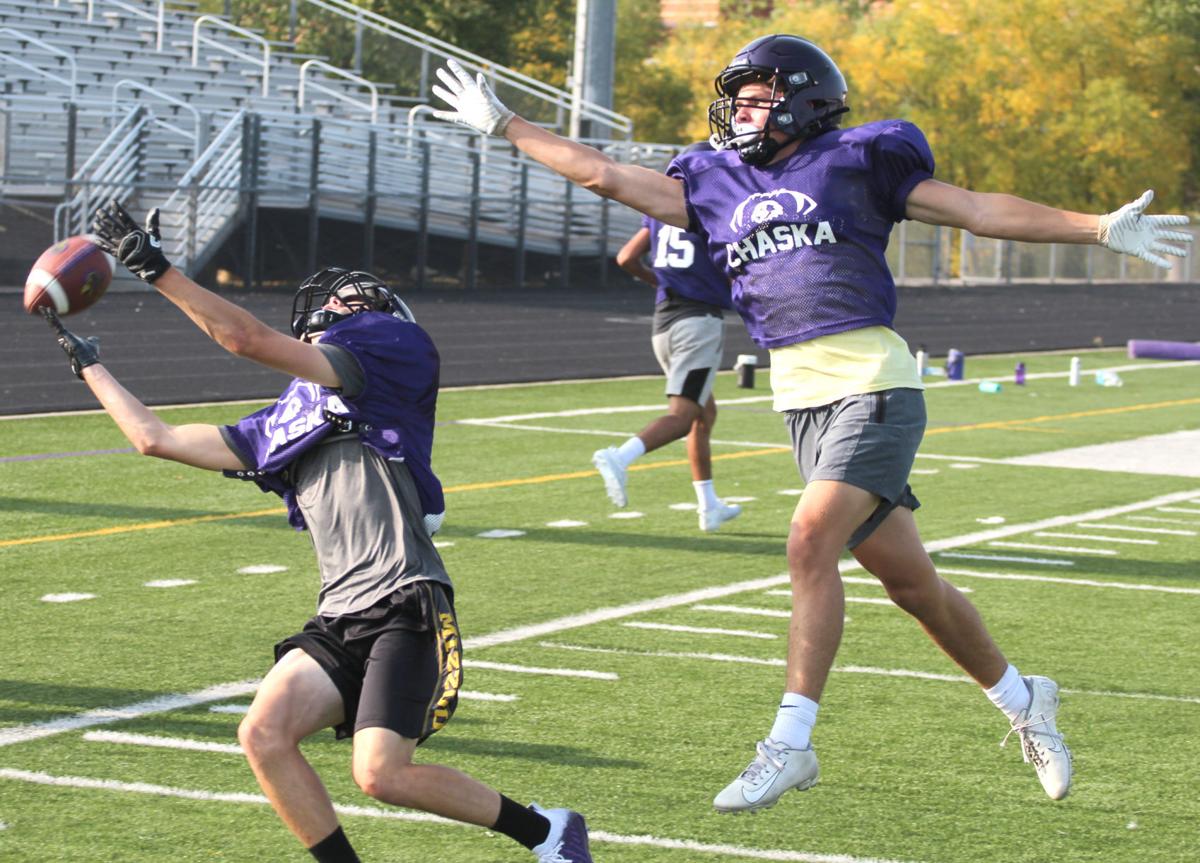 Chaska players work on a catch-and-cover drill on Sept. 21 during a training session at Chaska High School Stadium. 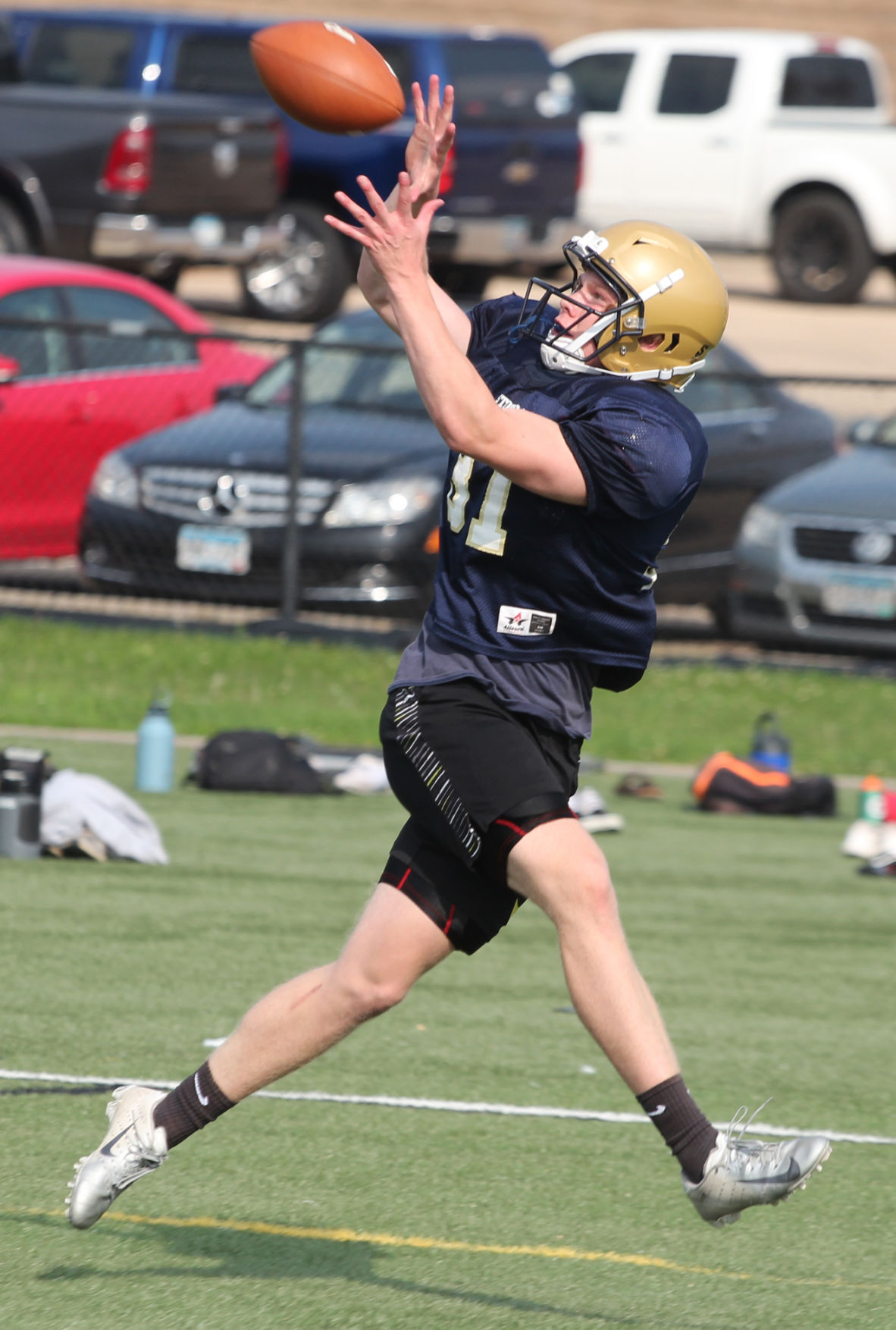 Charlie Coenen hauls in a catch in the end zone during a training session Sept. 22 on the upper turf at Chanhassen High School. Coenen, a junior, is a standout receiver for the Storm. 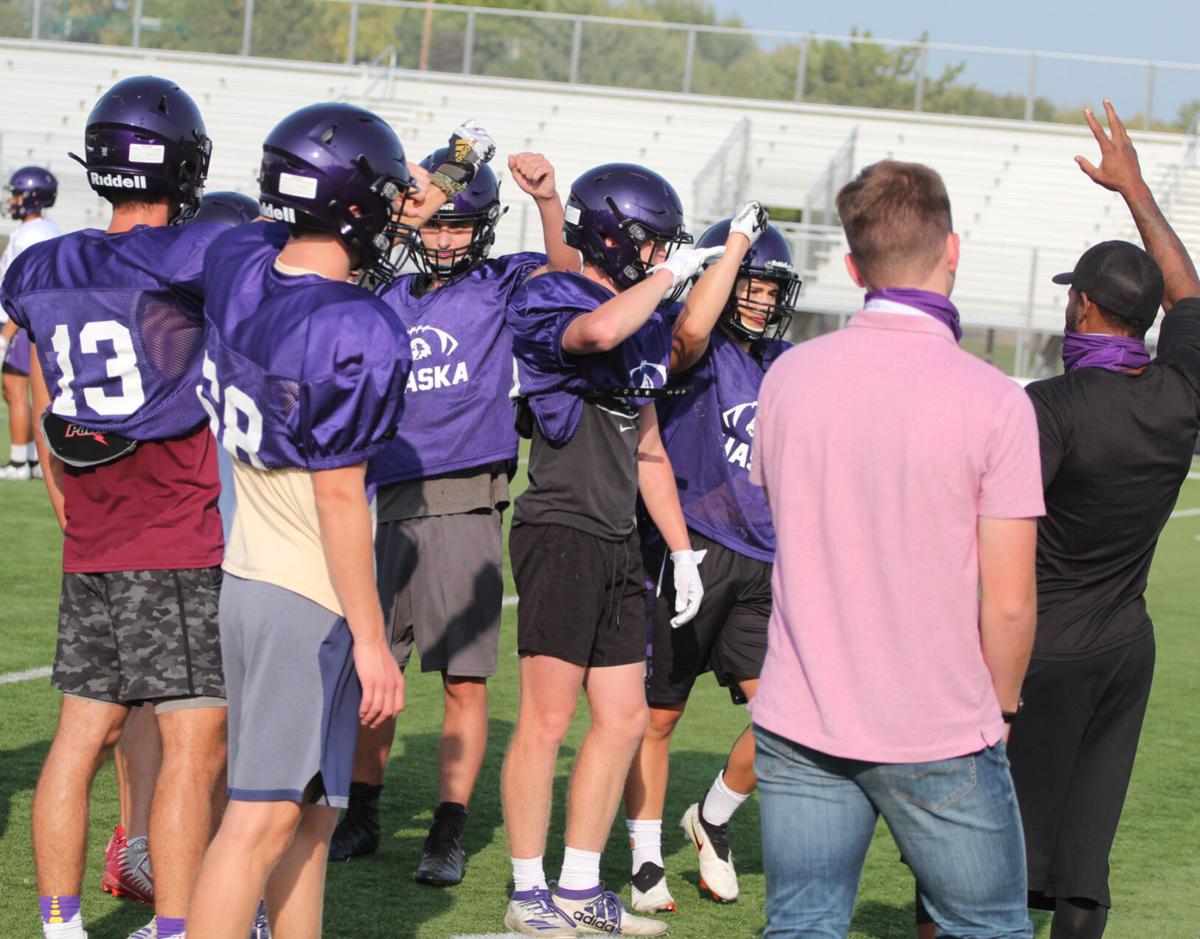 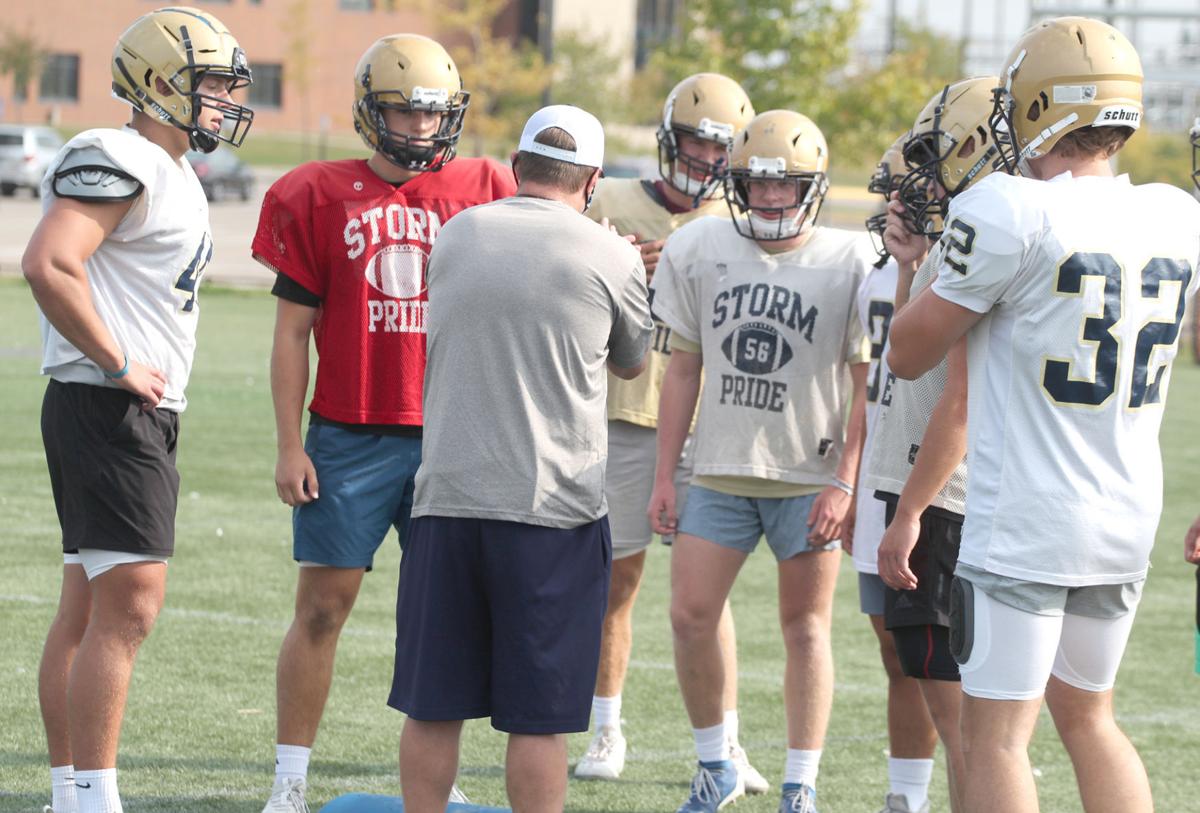 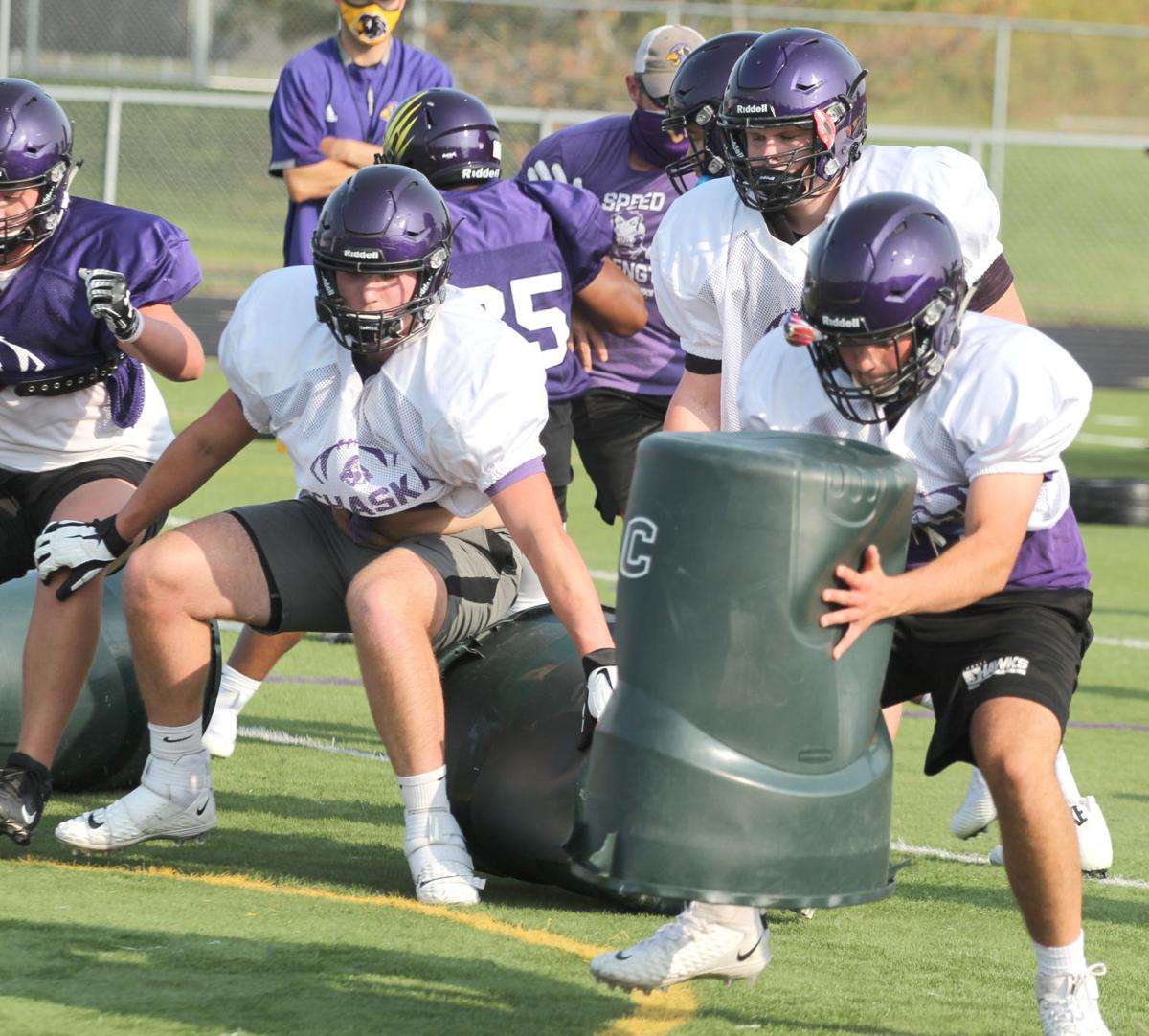 Chaska linemen work on blocking schemes during a practice session on Sept. 21. The first official practice is Monday, Sept. 28. 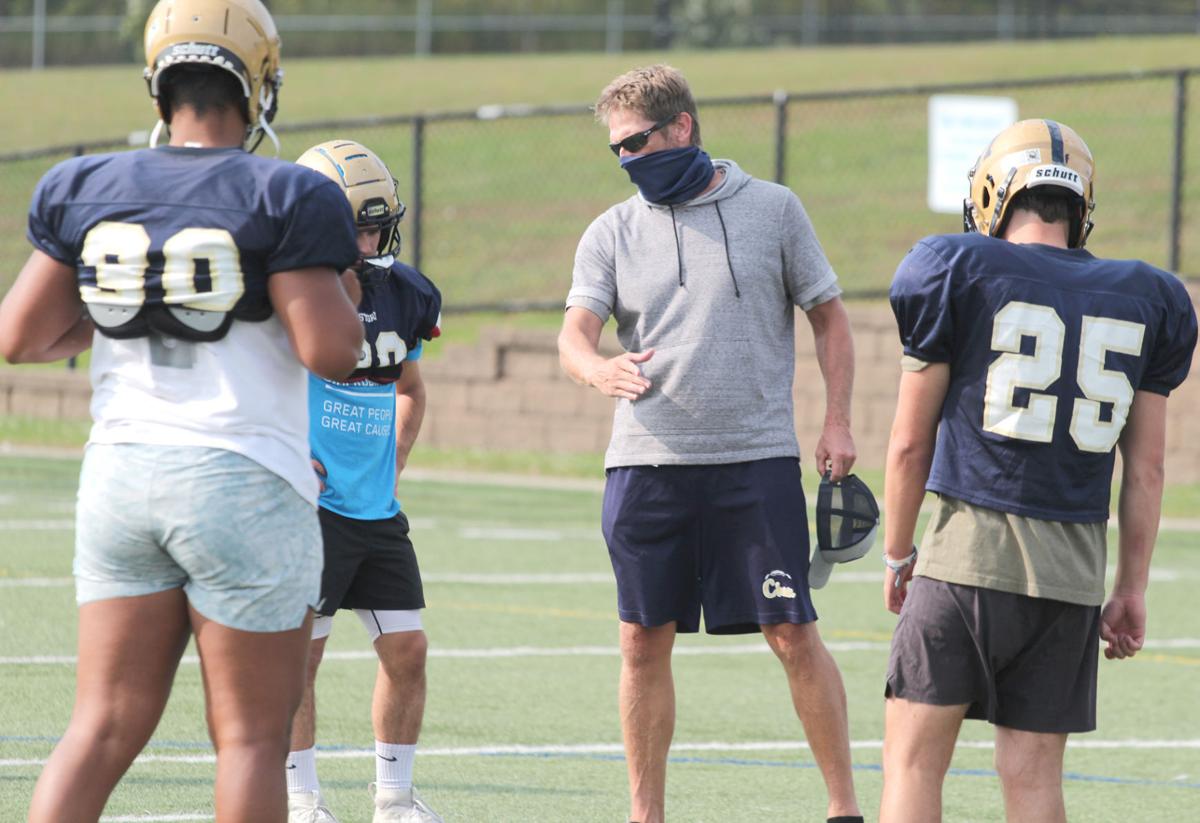 Who's ready for some football? Chanhassen's first 2020 game is Oct. 9, a home game versus Bloomington Jefferson.

Chaska linemen head off the field for a water break midway through a training session Sept. 22 just hours after the Minnesota State High School League announced football and volleyball will return to action beginning Sept. 28.

Chaska players work on a catch-and-cover drill on Sept. 21 during a training session at Chaska High School Stadium.

Charlie Coenen hauls in a catch in the end zone during a training session Sept. 22 on the upper turf at Chanhassen High School. Coenen, a junior, is a standout receiver for the Storm.

Chaska linemen work on blocking schemes during a practice session on Sept. 21. The first official practice is Monday, Sept. 28.

Who's ready for some football? Chanhassen's first 2020 game is Oct. 9, a home game versus Bloomington Jefferson.

Word spread like a wildfire Sept. 15 among high school football and volleyball circles around the state of Minnesota. Could those sports be returned to the traditional fall season?

Excitement grew. A petition with 25,000 signatures gained momentum. There was hope.

On Sept. 21, by a 15-3 vote for football, and a 14-4 vote for volleyball, Minnesota joined 30 other states in allowing football games this fall during the COVID-19 pandemic.

"The Minnesota State High School League continues to work to provide educational opportunities for our student athletes in the safest manner possible for all involved, said Board of Directors President Blaine Novak of New York Mills. "Coming into the meeting, we knew that every decision we make affects every other decision for the rest of the calendar year. Today’s decision, based on what we currently know and with the unknowns of what spring will bring, is based on the belief that playing now provides us the best opportunity to play a football and volleyball season."

Six days after board of directors from the Minnesota State High School League met for four hours discussing topics such as fall sports, they reconvened for another three-plus hours on Monday.

They heard from Dr. Bill Roberts, chair of the MSHSL Sports Medicine Advisory Committee. While he said the recommendation from the original Aug. 4 decision remained, more data had been collected, and team sports and physical activity experiences continues to evolve.

Some board members pointed out the success of the MSHSL's other four fall sports thus far.

"There is a tipping point for safe activity; determining which side of that continuum football and volleyball will fall without data will be difficult," Roberts said in a pre-meeting statement. "The challenge is to find an acceptable risk strategy somewhere between complete self-isolation and an unsafe health environment for players and staff."

Powerful statements from member schools, 76 percent for volleyball and 80 percent for football, signaling they wanted those sports in the fall, resonated with board members, who ultimately voted to move them back to the fall, beginning Sept. 28.

"The decisions by our Board of Directors both provide opportunities for many student athletes and also require everyone’s responsible actions in keeping students and communities safe," League Executive Director Erich Martens said. "It will be critical that our schools do their very best to enact protocols that maximize the safety of our students, coaches and officials.

"The amount of information that is considered, as well as the amount of discussion that takes place, is indicative of the challenges that each decision provides. We know that our activities support the mental health and physical well-being of our students and we hope that the initiation of these fall interscholastic seasons will provide outstanding and safe opportunities for our students," he added.

PEP IN THEIR STEP

The sounds of football returned a bit louder on the afternoon of Sept. 21. Pads crunching. Whistles blowing. The cheer among players when someone hauled in a great catch, or broke up a play.

While still considered one of 12 training sessions previously allowed for all Minnesota high school football and volleyball programs, both Chanhassen and Chaska were treating it like an extra week of preparation for Oct. 9-10.

"It's definitely nice. For me, I was always thinking, hoping in the back of my head that this would happen," Chanhassen senior Kenyatta Brannon said. "There were other states like Michigan that reversed the decision, allowed football. It gave me hope."

"I can speak for the whole team. We're excited. We're all really happy to have the opportunity to play. Just to have this time together, we understand how special that is, and what we have to do to keep playing. We're ready to attack the day and keep moving forward," Chaska senior Nic Snuggerud said.

Brannon said it was a win-win scenario for football programs. If the decision was to play in the spring it would have given athletes six more months to prepare themselves for action.

Though he's glad to be playing this fall, giving college coaches some more film before they make their decision on who to offer. Thus far, Brannon has drawn interest locally from Winona State, Southwest Minnesota State, University of Mary, University of St. Thomas as well as Air Force and Army West Point.

"Everyone is more excited that's for sure. These practices this week, they'd almost feel pointless if we were going to stop for another six months, but now that we have games ahead in a couple of weeks, there's definitely a sense of purpose. You can see it in everyone's faces," Brannon said.

"Some of us guys have been getting together this summer, we have our 7-on-7 passing league, so I feel like we're all comfortable in our offense and defense. We're running around making plays now. Less thinking, more doing now. It's nice to have this extra week to prepare guys for those first games. Even guys who played last year, there's always ways to improve and these practices are great for that," said Snuggerud, who visited North Dakota State and South Dakota State universities last February.

For Snuggerud and the Hawks, a big ol' giant target will be on their backs this season after Chaska won the Class 5A State Championship in 2019.

"We're going to be the team everyone wants to beat. A lot of teams will be circling us on their schedule. We don't really look at the schedule, our mentality each week is the same. Play as hard as we can, improve every week, and work toward achieving our goals," Snuggerud said.

At Monday’s meeting, the Board of Directors also discussed the League’s activities calendar for the remainder of the 2020-2021 school year, including information from League staff on postseason options for the fall season.

Approving the complete calendar for the remainder of the school year will be an Action Item at the Board of Directors’ next regularly scheduled meeting on Oct. 1.

It is thought that with the move of football and volleyball back to the fall, traditional spring sports will start on or close to time and not extend farther than mid-June.

Format: Team only, no individual play. Championship and consolation brackets. Two matches per week. Seeded will be based on geography (North and South sub-section likely to be used in Section 2AA)

Spectators: up to 250 people. Section to determine if tickets will be sold.

Location: A multi-site section meet held over two days with diving being held at a separate time and at a mutually agreed upon location determined by section management and region.

Format: Timed finals format with a maximum of four teams at any one site. Teams allowed a maximum of four entries per event. This also applies to diving. Maximum number of swimmers per team would be 22 bringing the total of swim competitors to 88. Three coaches allowed. No student managers.

Spectators: None if held at a pool inside of a school building.

Location: Multiple sites as determined by each section

Format: A multi-site or multi-session section meet held over two days if necessary. A maximum of four teams on course at one time. Section Management and regions to determine how to group teams for competition. Teams consist of six runners with the top five scoring. This allows for not more than 24 runners on start line at any time. Girls and boys races may run on the same day and same course, but not be on the course at the same time.

Spectators: Up to 250 spectators on site. Each participant is suggested to have two people viewing the race. Only athletes are allowed in the camp sites, and spectators must stay away from the start line and finish chutes.

Format: First week: Round of 16/8 for Class A, Round of 8 for Class AA. Second week: starting on Oct. 19 should be used for semifinals and finals.

Spectators: Up to 250 people. Section will determine if there is an attendance cost.