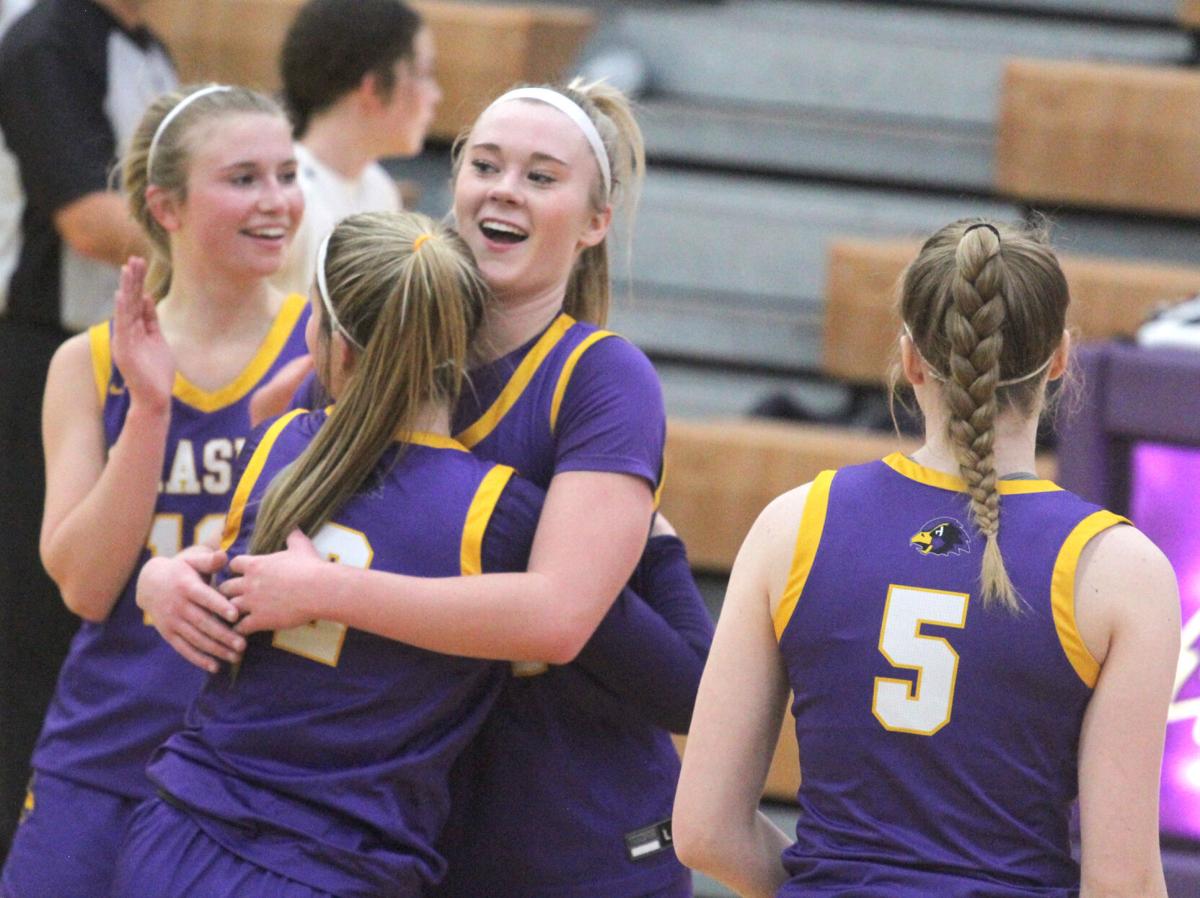 Teammates including Kennedy Sanders and Lucy Dardis celebrate a milestone 3-point bucket for Chaska senior Mallory Heyer, career-point No. 2,000, in a home win on Jan. 13. 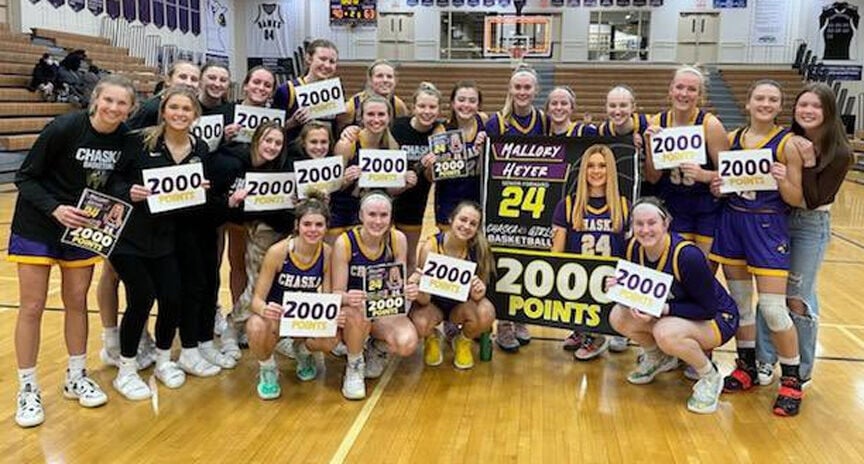 Mallory Heyer became the second Chaska girls basketball player to reach 2,000 points for a career in a Jan. 13 win. 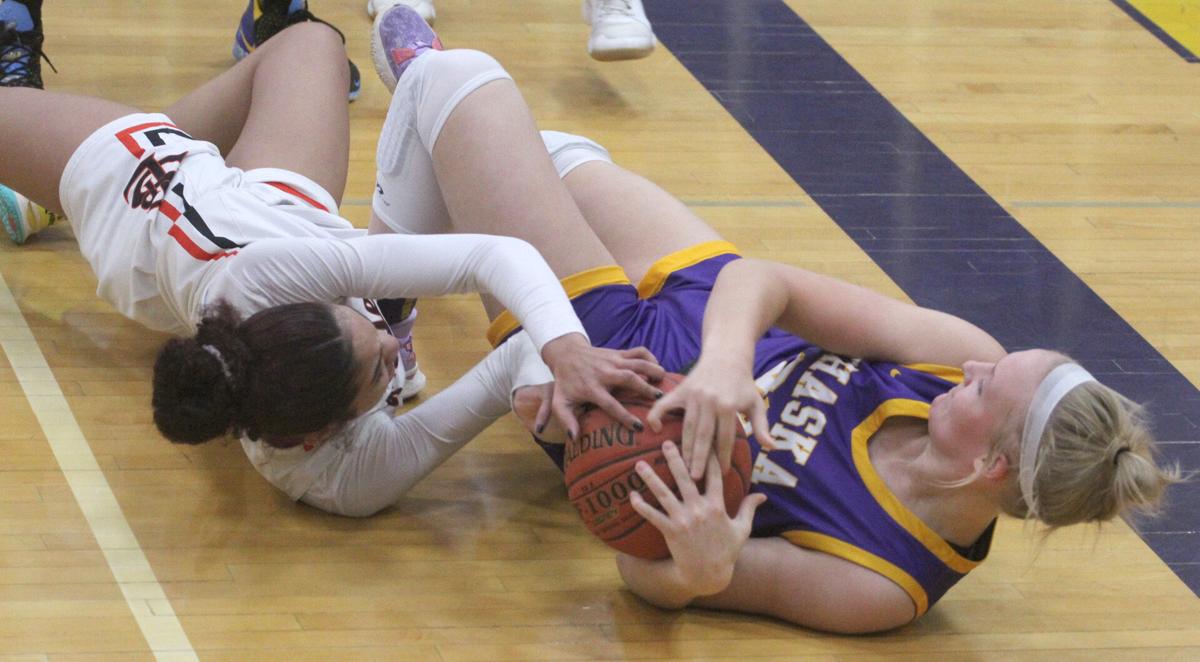 Chaska's Kendall Karrmann creates a jump ball with a dual possession on a loose ball in the Hawks' win over St. Louis Park. 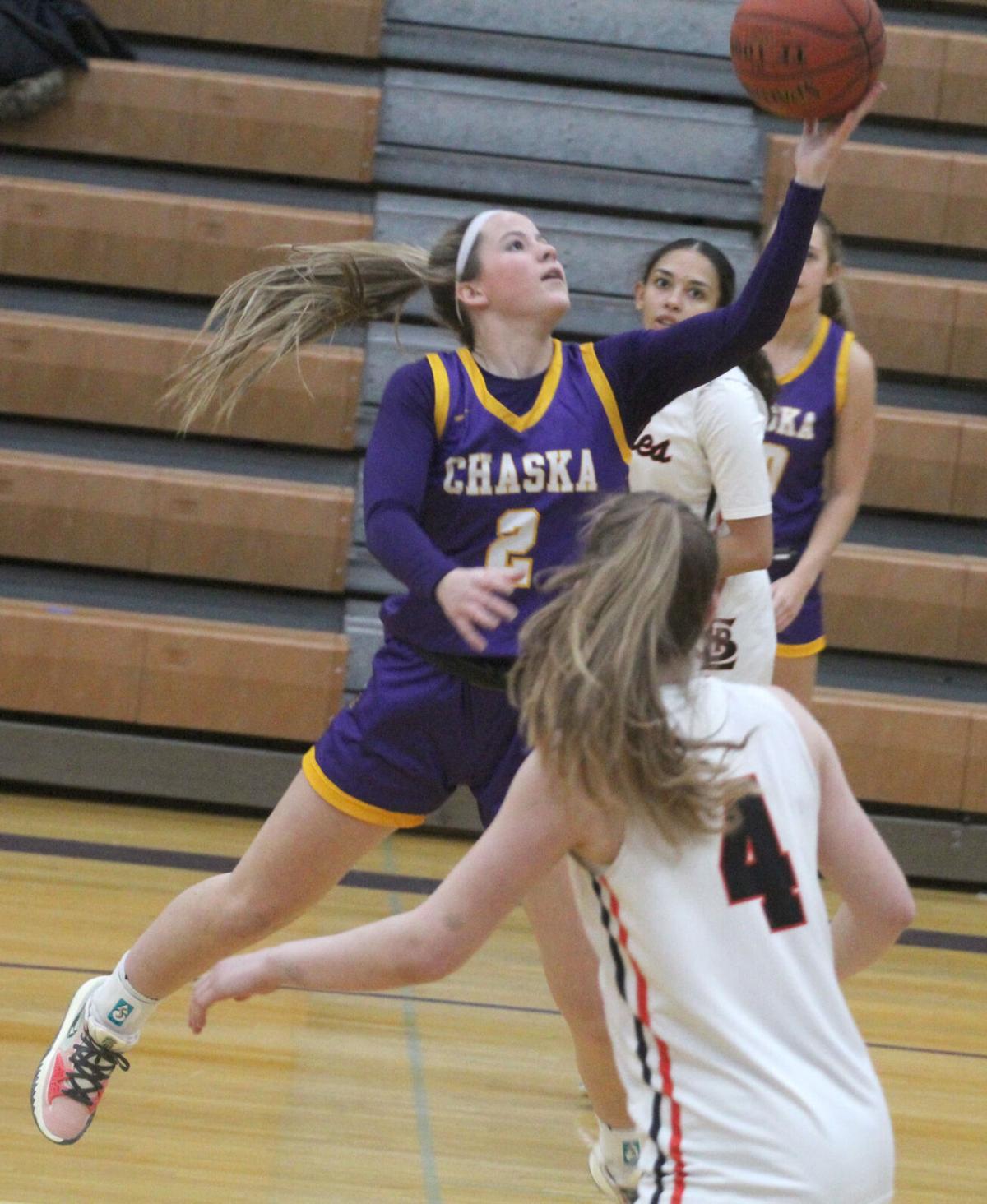 Chaska's Kennedy Sanders with a drive and score to the hoop in a Metro West Conference win over St. Louis Park. 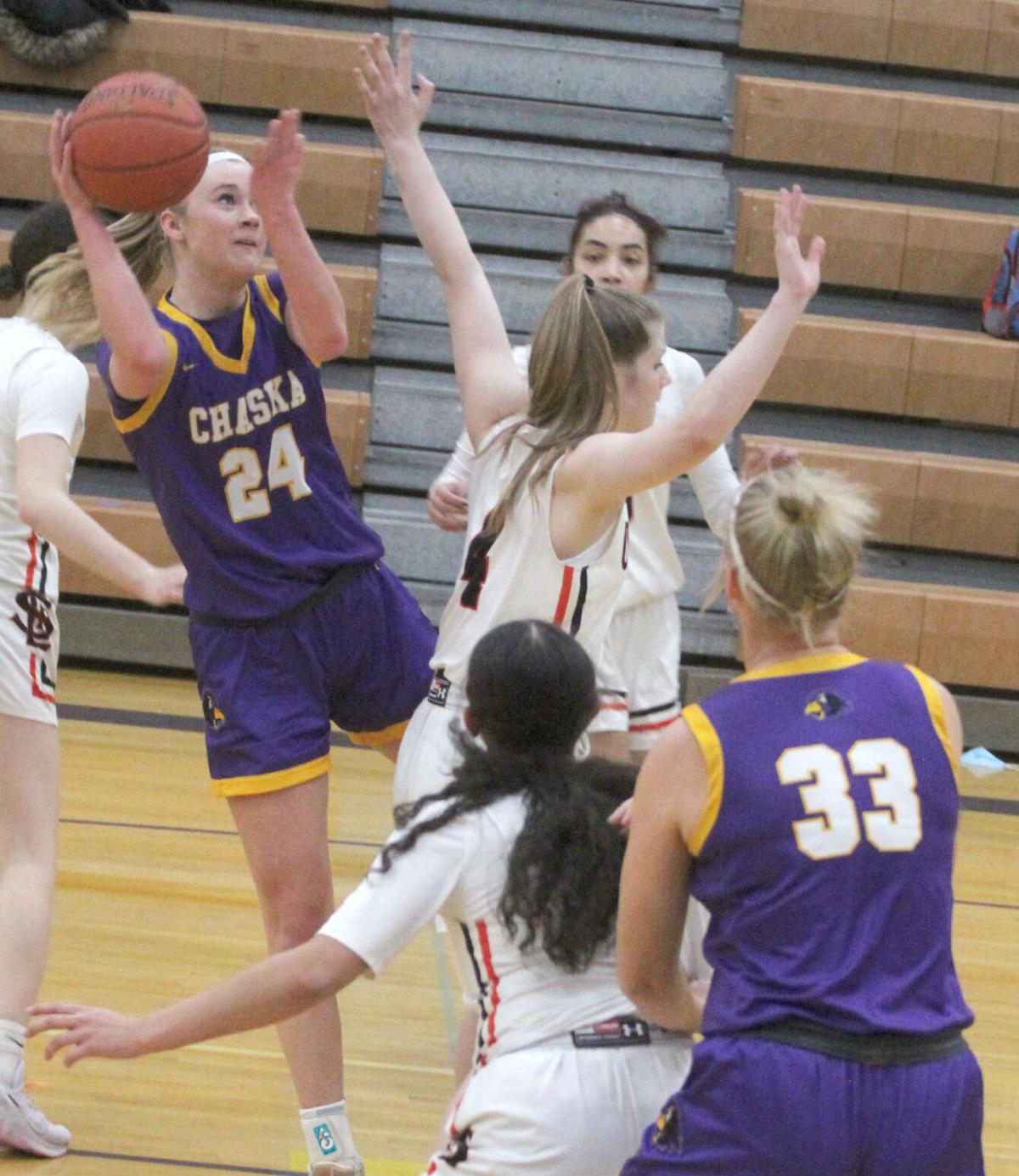 St. Louis Park had no answer for Chaska's Mallory Heyer, who poured in 30 of the Hawks' 90 points.

Teammates including Kennedy Sanders and Lucy Dardis celebrate a milestone 3-point bucket for Chaska senior Mallory Heyer, career-point No. 2,000, in a home win on Jan. 13.

Mallory Heyer became the second Chaska girls basketball player to reach 2,000 points for a career in a Jan. 13 win.

Chaska's Kendall Karrmann creates a jump ball with a dual possession on a loose ball in the Hawks' win over St. Louis Park.

Chaska's Kennedy Sanders with a drive and score to the hoop in a Metro West Conference win over St. Louis Park.

St. Louis Park had no answer for Chaska's Mallory Heyer, who poured in 30 of the Hawks' 90 points.

Mallory Heyer was 19 points short of a milestone, a number she was aware of, but didn't know exactly into Chaska's Jan. 13 meeting with St. Louis Park.

Teammate Kennedy Sanders may have let her know, or Heyer was just feeling it. Either way, the Hawks senior stepped back beyond the arc in transition, sinking a 3-pointer to reach 2,000 career points in the final minute of the first half.

Heyer netted a game-high 30 points as Chaska put on an offensive clinic in a 90-63 win over the Orioles.

Heyer dominated in the paint, as did Chaska as a team. Lily Niebuhr scored a career-high 11 points, while Sanders drove to the hoop often, finishing with 23 points. Seniors Kendall Karrmann and Zoe Cutler each had six points as well.

A St. Louis Park squad got a career-high 30 points from Selam Maher with Shantell Harden tallying 20.

Up next for the Hawks with Saturday's contest with Roseville Area postponed into February, is a road game at Bloomington Kennedy on Tuesday, Jan. 18.

Despite the best effort from Bloomington Kennedy's Dalton Smazal, Chanhassen, behind 8-of-8 free-throw shooting late, held on for a 60-59 win on Jan. 13.

Smazal hit a pair of 3-pointers as the Eagles nearly erased a 12-point deficit in the second half.

The Storm had eight players with five or more points.

No other scoring was available.

The return of Katelyn Roberts and Elisabeth Gerebi sparked Chaska/Chanhassen to a 6-2 win over Metro West Conference opponent New Prague on Jan. 13 at Chaska Community Center.

Roberts scored a natural hat trick in the first period, adding an assist on Baillie Whalen's first goal of the season.

Elizabeth Splett also netted her first varsity goal with an assist for the Storm Hawks on the power play. Alyson McPartland also had a player-advantage goal in the third period.

Rockford had four players near or around 20 points, scoring 41 and 51 points in the two halves, in a 92-77 win over Southwest Christian on Jan. 13.

Derek Pepin was the Rockets' top scorer with 22 points.

Brayden Zimmerman and Nick Burke netted 19 and 18 points for the Stars with Sam Arnold sinking four 3-pointers in a 12-point effort.

Southwest Christian (6-5) is off until Friday, Jan. 21 in a home contest with Mound-Westonka.

Maddie Kaiser notched her second hat trick in three games, extending her six-game scoring streak, in a 4-2 win over Gentry Academy on Jan. 13 in Vadnais Heights.

Tied at two, Kaiser, now with 21 goals on the season, broke the tie with a power-play goal from Shae Messner at the 5:41 mark. Messner also had an unassisted goal in the second period.

Sedona Blair turned away 30-of-32 shots in the winning effort in net for the fifth-ranked Fire.

Andrew Erhart netted a hat trick with an assist, while Caleb Bendell added a goal and two assists in Southwest Christian/Richfield's 7-2 win over host Mound-Westonka on Jan. 13.

Caleb Swanson, Erhart and Brody Hardacre each scored in a three-goal first period for the Stars.

A once four-goal lead shrunk to two, Cody Thomas' first varsity goal with under six minutes to play led to the Wright County Conference victory.

Russell Gillette scored a pair of low-scoring decisions for Chaska/Chanhassen in a triangular at defending Section 6AAA champion Waconia on Jan. 13.

Gillette scored a 4-3 victory over Steven Cruze of Willmar in the first match before finishing the night with a 4-2 win over the Wildcats' Levi Mueller.

Gillette leads the Storm Hawks with 21 match wins in 30 appearances.

Parker Levar added a 75-second pin for Chaska/Chanhassen in a 63-9 loss to Willmar in the triangular's second round. Ben Pierce had a hard-fought 3-0 defeat at 113 pounds.

Against Waconia, Michael Gillette scored a fall at 4:35 of the third period at 132 pounds, while heavyweight Prentiss Derrick posted a pin at 1:47 of his match in the Storm Hawks' 61-15 loss.

* The Storm improved to 4-2 in the Metro West Conference with a 15-point win over the Eagles. No other game information and scoring was available. Chanhassen is at one-win New Prague on Jan. 18.

* A two-point lead at halftime, Holy Family Catholic was outscored 32-22 in the second half by host Mound-Westonka in the Wright County Conference opener on Jan. 13. Boden Kapke was 9-of-19 from the field with eight free throws in scoring a game-high 29 points with 23 rebounds.

* Trailing 2-1 after the first intermission, the Skippers scored four times in the second period, twice from Teddy Manlove, in a 6-3 win in Lake Conference play. Hagen Burrows also had two goals with Nick Baer finishing with a tally and assist. Minnetonka had a 43-17 shot advantage.

* Among the Minnetonka winners were seniors Ryan Diede in the 200 individual medley, Henry Rosenhagen in the 100 butterfly, Ryan McGuirk in the 100 freestyle, Luke Edwards in the 100 backstroke, and Carson Witte in the 100 breaststroke. Trey Mahoney won the diving competition by less than a point with a total of 212.60.