Shane Wein, left, Chaska High School Class of 2020, fires on the clay target at a recent league competition at Watertown Gun Club. To his right is Derek Jutting, who was among those that introduced him to the team. 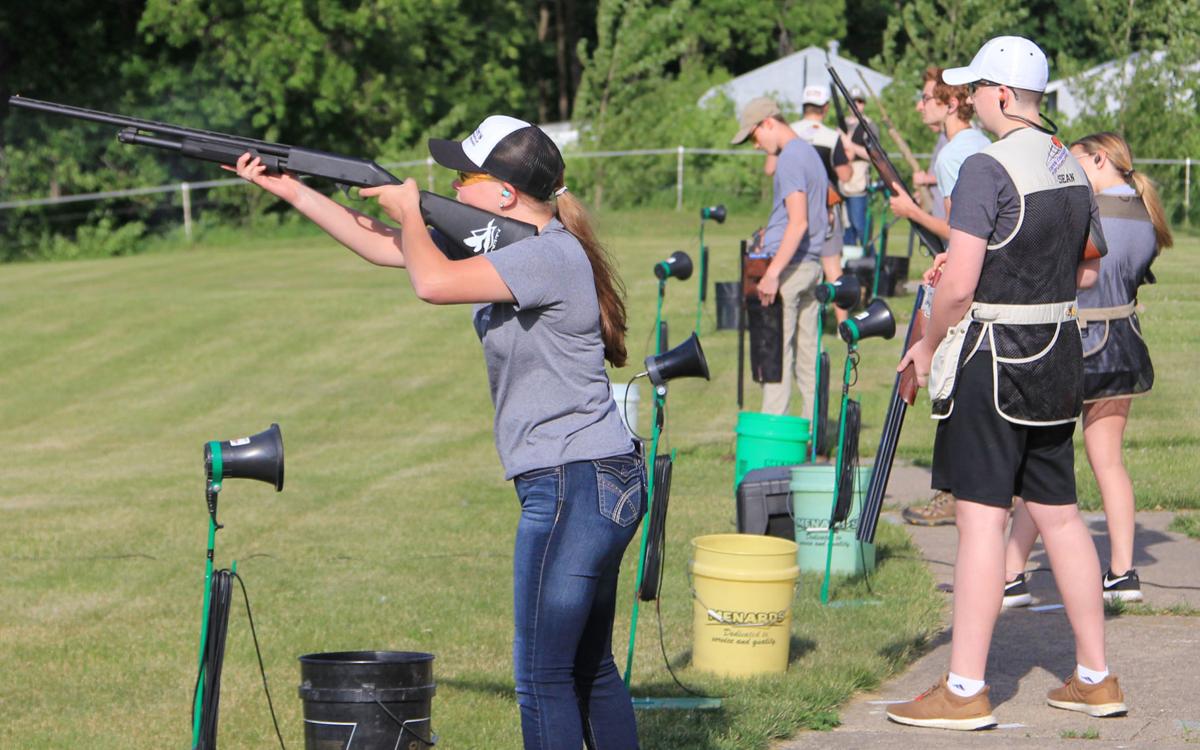 Riley Worm, a senior-to-be at Chaska High School, tracks the clay target in a recent shoot at Watertown Gun Club. 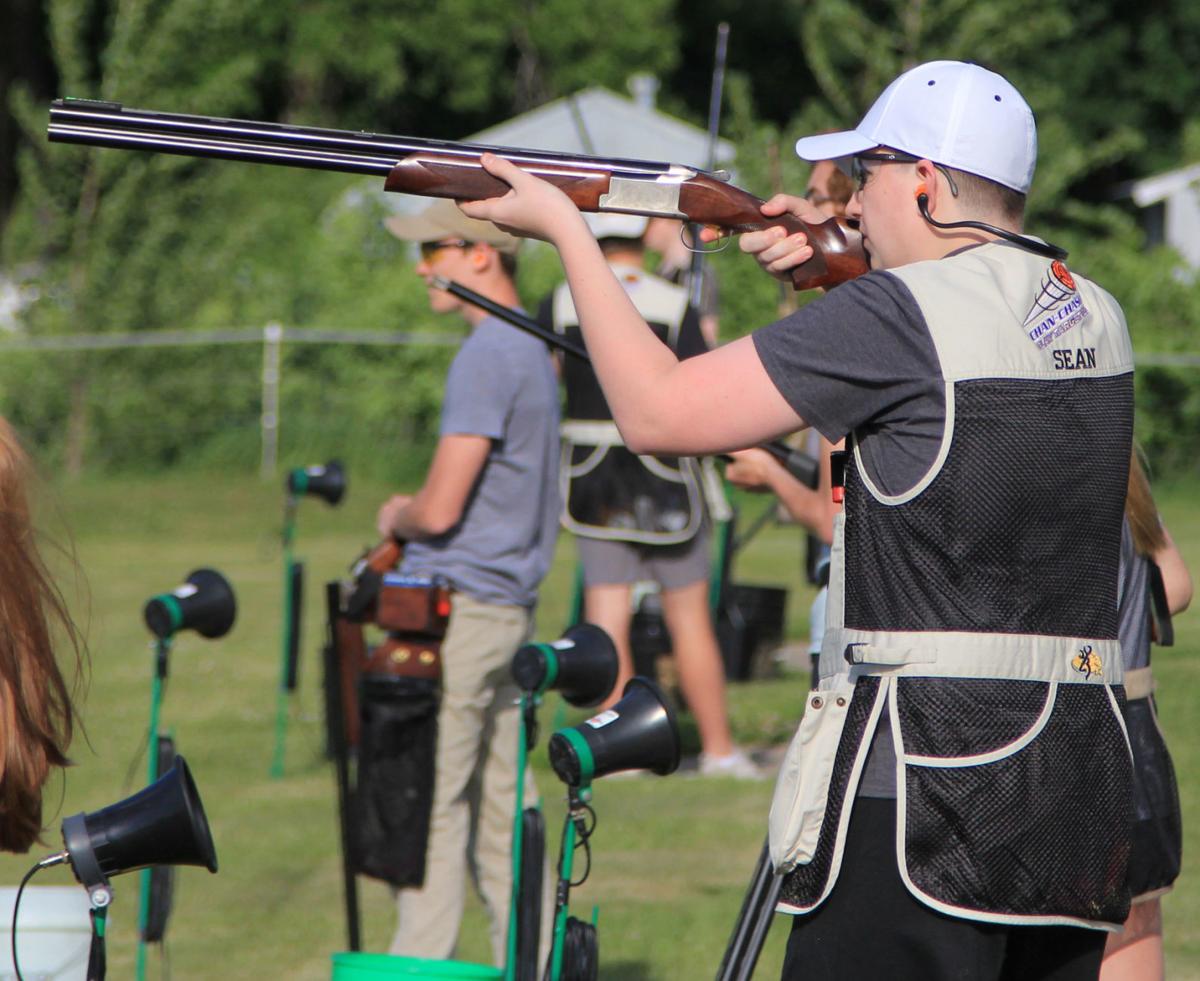 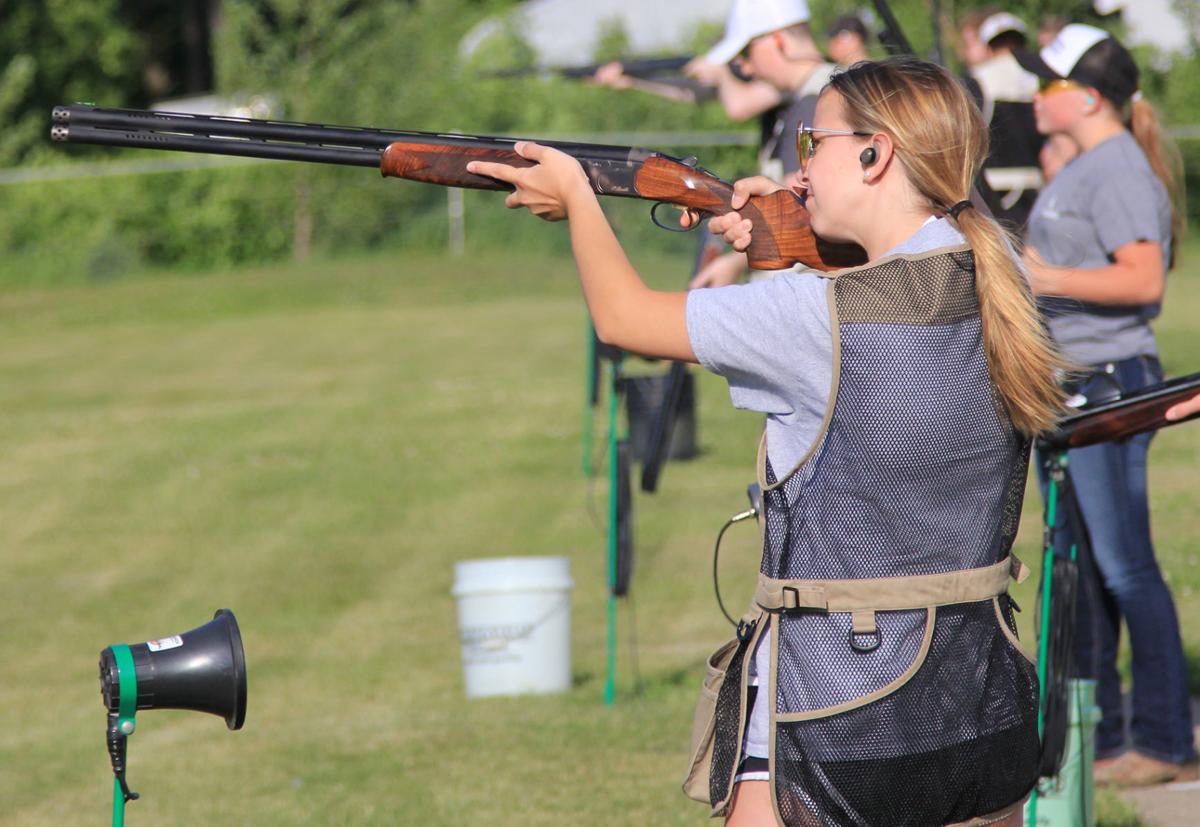 Kakki Sampson, a senior-to-be at Chanhassen High School, tracks the clay target in a recent shoot at Watertown Gun Club. 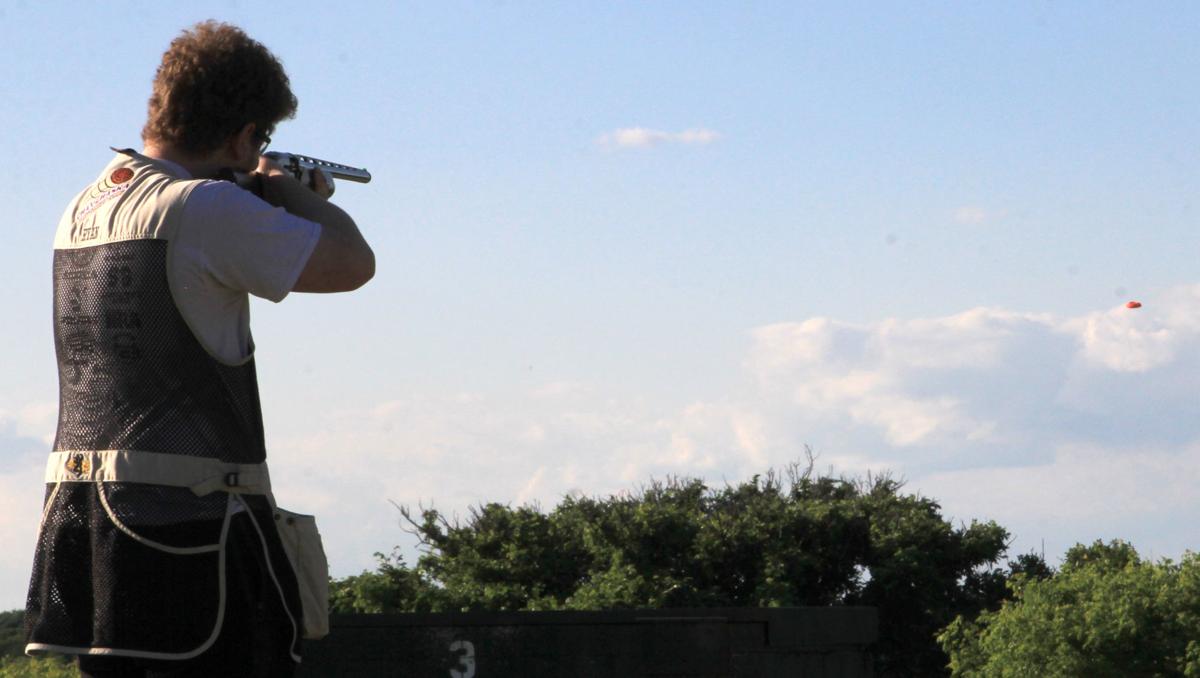 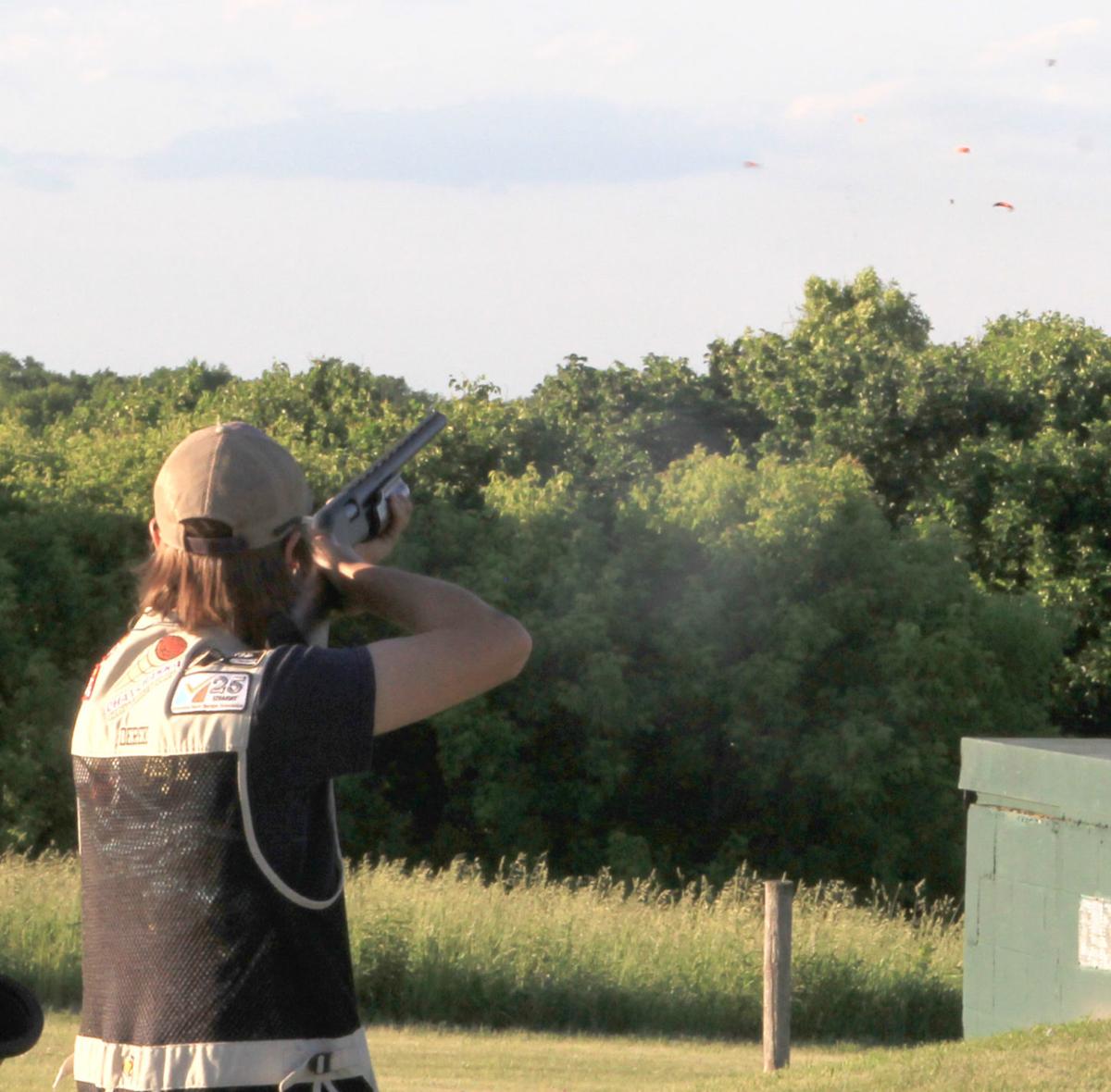 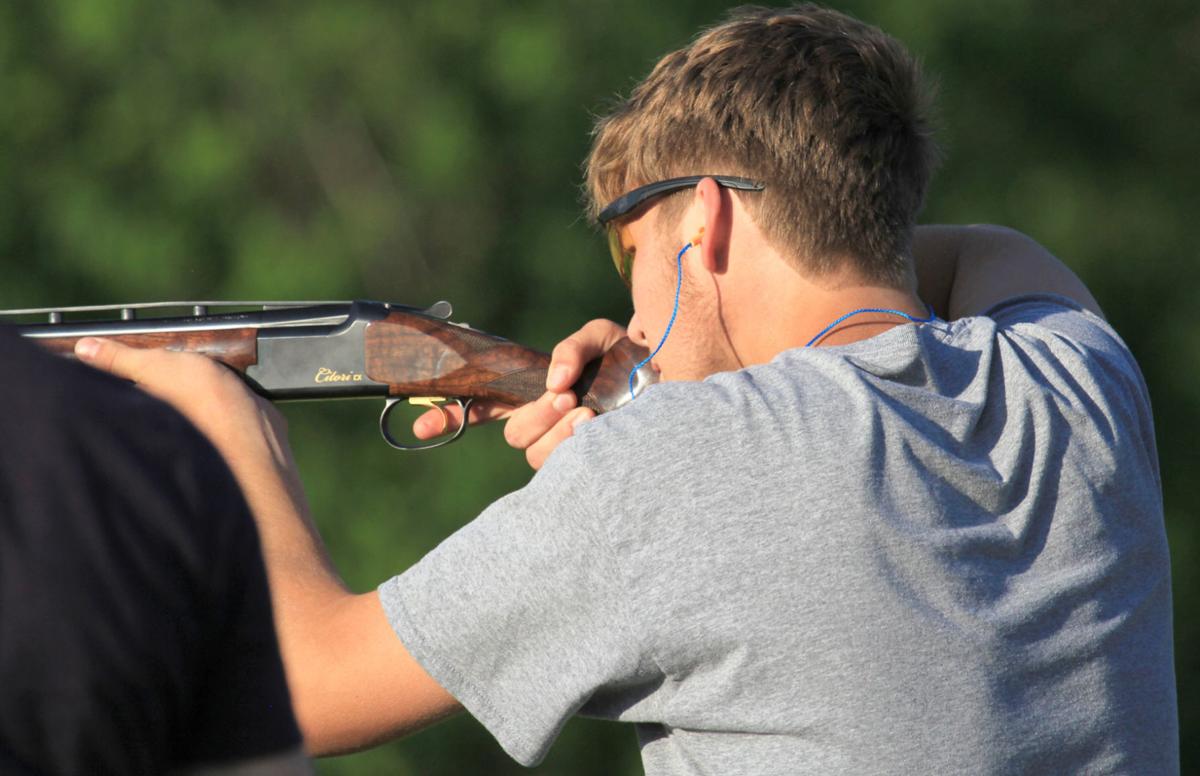 Derek Jutting joined the Chaska Chan Clay Target Team as a freshman at Chanhassen High School. He urged others to participate, including middle school friend Shane Wein. Jutting has the team’s best scoring average this summer.

Shane Wein, left, Chaska High School Class of 2020, fires on the clay target at a recent league competition at Watertown Gun Club. To his right is Derek Jutting, who was among those that introduced him to the team.

Riley Worm, a senior-to-be at Chaska High School, tracks the clay target in a recent shoot at Watertown Gun Club.

Kakki Sampson, a senior-to-be at Chanhassen High School, tracks the clay target in a recent shoot at Watertown Gun Club.

Derek Jutting joined the Chaska Chan Clay Target Team as a freshman at Chanhassen High School. He urged others to participate, including middle school friend Shane Wein. Jutting has the team’s best scoring average this summer.

Derek Jutting and Shane Wein had previous experience handling firearms out in the woods hunting. But neither knew exactly what they were getting into when they joined the Chaska Chan Clay Target Team.

For Jutting, who graduated from Chanhassen High School in June, he quickly found out that trap shooting is more a mental test than a physical test.

"Trap is a mind game. It's about staying focused standing there. Other people are firing on the range around you and you have to block all of that out," he said. "The thing I find the hardest is staying out of your own head. I'll catch myself saying 'stop thinking so much,' because when I'm thinking, that's when I find myself missing."

Shane Wein became friends with Jutting in eighth grade. While Wein ended up at Chaska High School a year later, the two remained in touch. At Jutting's urging, as well as Wein's dad, Steve, he joined the clay target team as a sophomore.

The appeal was simple. Doing an activity that from the outside looked fun.

"Going out there, the act of shooting targets, getting better over time, that really appealed to me," Wein said. "It's really fun to be accurate and be on it. I've really enjoyed my three years on the team."

The Minnesota Department of Natural Resources conducted an informal independent survey of gun clubs throughout Minnesota in 2001. It was determined that the average age of gun club members was almost 57 years old.

This was a problem for gun clubs, which had seen roughly 10 percent of facilities statewide close in the previous decade. Additionally, memberships had decreased and leagues were harder to come by.

The solution lied in that something needed to be done to attract younger shooters, or the future of shooting sports would be in jeopardy.

Jim Sable, then Youth Program Director at the Plymouth Gun Club in Plymouth, suggested to start with schools. "That’s where the kids are," he said.

In 2008, the Minnesota State High School Clay Target League was started with three teams and 30 student athletes. The League doubled the number of teams and student athletes for five consecutive years. By 2014, the MNSHSCTL Championship was the largest shooting event in the world.

"When you first get there, they really stress safety. Everyone goes through firearms safety and stuff," said Jutting, who joined as a freshman. "Once you get into it, everything is so loose. Everyone is pretty chill. For me, part (of the appeal) is me wanting to get better, but it is also about the really good friends I've met."

Jutting recruited friends to the team early on. Wein accepted the challenge.

"My dad really thought I'd enjoy it. Once I got out there, tried it, I really enjoyed it," said Wein, who played lacrosse and skied early on before settling on trap shooting and robotics. "It ended up working out really good. I've met some pretty good friends.

The Chan Chaska team shoots Tuesdays and Thursdays at Watertown Gun Club. Other local teams include Prior Lake, which shoots at the Minneapolis Gun Club, and Shakopee and New Prague, which compete at the Minnesota Horse and Hunt Club in Prior Lake.

OPEN TO THE PUBLIC

Bob Burditt has seen it all at the Minnesota Horse and Hunt Club. He's been employed there since 1989. As a 14-year-old he worked on the range, pulling the lever when players called for the birdie.

Trap machines were "crude," always breaking down back in those times, Burditt said. "Now you get one new, you unbox it and set it up and it stays perfect for years and years."

Burditt is now in charge of sporting clays and league play. The Prior Lake club launches more than a million White Flyer targets each year. Burditt said the Minnesota Horse and Hunt Club is the biggest in the state and in the top two or so in the Midwest. Nationwide, it's somewhere in the 15-to-20 range.

The club caters to the most inexperienced shooters up to the seasoned sharp shooter. Firearm safety classes are available with clay target shooting open to the public seven days a week all year long.

"For the most part, we've seen larger numbers this season. We usually have kids here from Shakopee High School, New Prague, Lakeville, St. Louis Park. New Prague High School is still shooting, but instead of like 70 or 80 kids, it's maybe 40. St. Louis Park is also really small, maybe 15 to 20 kids. Shakopee and Lakeville aren't competing," Burditt said. "We've lost a lot of volume of targets not shot without those teams, but walk-up traffic has really helped make up that loss."

The Chaska Chan Clay Target Team started its league competitions in recent weeks. Instead of one shoot per week, the team is out at the club on Tuesdays and Thursdays. To maintain social distance, the groups are split into two.

"It's different coming from home, not from school. Normally you'd see people and say 'I'll see ya at trap tonight.' Other than that, it's still pretty much the same," Jutting said.

"We go out there, there's 10 minutes of prep, and then we shoot. We're not supposed to hang around. We don't have the long breaks before rounds to sit around and talk," Wein said. "It's always nice to show up to trap club and see friends. Always fun to see people I don't go to school. So part of that is gone."

Burditt said with the state shutdown, the club was forced to close for two weeks this spring. Business was slower when it first reopened and the normal spring and summer leagues were condensed into one 15-week league.

"Everyone is happy. It's worked out really well," he said.

LOVE OF THE SHOOT

"I had been hunting before, but I really hadn't practiced with aiming. My first time on the trap team was my first time shooting that much, and man did I suck," he laughed. "It was frustrating at first, but so much fun going from what I started out as to where I am now."

Wein recently knocked down a pair of consecutive perfect scores of 25.

"When I first started, I was shooting down probably somewhere around 11s and 12s," said Jutting, who has the top scoring average on the team, and consistently puts up scores of 25. "It's about focusing on the target, not on the end of your gun. You put your gun up first and then you watch the bird all the way. Once you get used to it, the motions the bird goes, knowing where to shoot, should I lead it or not, you can really get the hang of it."

"We have a lot of guys in their 60s and 70s that come out weekly and shoot," Burditt said. "For newer shooters, you can show up and shoot 50 targets for $26. Your shoulder will be pretty sore after that. Lessons are available. We'll teach you methods so you can hit the target."

Even after all of these years, Burditt remains in love with his job.

"It's the uniqueness of the job. I'm outside all the time. In the summer, in the winter. It's just really fun. I have my dogs out here with me leading hunting parties. I'm just doing something fun everyday," he said.