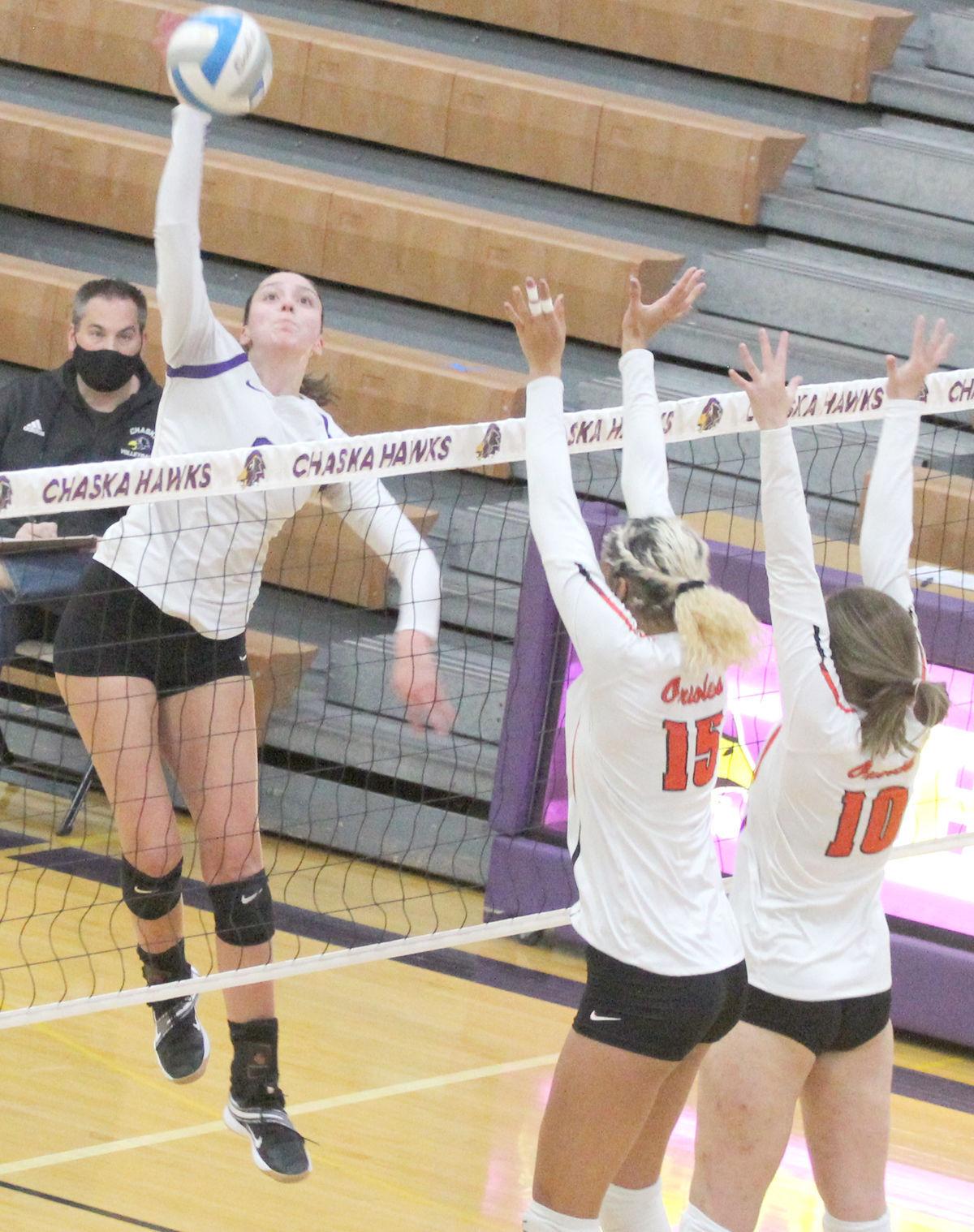 Chaska’s Hanna Thompson led the offense in a 3-0 win over St. Louis Park on oct. 29, moving the Hawks to 6-0 in the Metro West Conference.

Chaska senior setter Payton Auseth dives to the floor to keep the play alive in game three, a 3-0 win over St. Louis Park on Oct. 29.

Chaska’s Hanna Thompson led the offense in a 3-0 win over St. Louis Park on oct. 29, moving the Hawks to 6-0 in the Metro West Conference.

Chaska senior setter Payton Auseth dives to the floor to keep the play alive in game three, a 3-0 win over St. Louis Park on Oct. 29.

Chaska was one game away from a state tournament appearance in 2019. Returning five hitters and two defensive specialists from that squad, high hopes were in place for 2020.

Payton Auseth knew the opportunity ahead of her. So she worked hard, pushing herself during the club season.

"I was a little nervous in the beginning, it's a big role to fill, trying to replace Hannah. Being on varsity the last two years, watching her, how she sets, how she forces the middles, I really felt like I could come in and handle the position," Auseth said.

On Oct. 29, facing St. Louis Park, Chaska's biggest test in the Metro West Conference, Auseth's range of abilities were showcased. Whether it was strong connections already established in seven matches with her hitters, or her ability to play defense first, set second, that helped the Hawks win in three games.

"We've really been working hard in practice to perfect those passes. (Payton) does a great job of placing the ball where I can put the ball away," Thompson said.

Auseth went often to Thompson, who had six kills in game one, matching that over the final two games. Chaska's explosive outside hitters in Mallory Heyer (11 kills) and Ella Christ (13 kills) leave Thompson able to swing hard in the middle.

And when she does see teams double-team her, being a fourth-year varsity member, she's able to adjust, using a tip shot or using the entire court.

"Teams definitely camp on me. In club I saw some pretty big girls, so I'm kind of used to it. Used to swinging high and swinging hard over and around them. We have such a talented offense, it's really hard to pick-and-choose who to cover," Thompson said.

Thompson's game continues to evolve. A late-season addition to the serving line last season, she's continued that role as a senior, even adding some back-row responsibilities -- a rare thing among middle hitters.

Thompson was 16-for-16 from the service line with two aces. She also was second on the team with 13 digs.

Wherever she was, Thompson was cool and calm for the Hawks. And having that strong connection with her setter really showed.

"I absolutely love it," said Thompson of serving and playing in the back row for two rotations. "I feel like it gives me momentum. Passing is something still new for me, and I'm working to get better with it every day, but I really like the new role, the new challenge."

Seven consecutive points after trailing 19-18 had Chaska up 2-0 in the match.

"I've been a (defensive specialist) before, so I have that defensive background and I really think that helps me," Auseth said. "Defense is always a focus of mine both in club and the high school seasons. It is such an important part of the game."

Auseth led Chaska with 15 digs and 45 assists without a setting violation.

Chaska led from start to finish in game three, a Heyer attack from Auseth for the winning point.

At 6-1 overall, undefeated in the Metro West Conference, Chaska is one game clear of Bloomington Jefferson and two games ahead of St. Louis Park.

"Unfortunately, our senior year is really short. We have to go out, have fun and make the most of it. Try to go undefeated in conference. This was definitely the most competitive team from our conference we've played," Thompson said. "This was a great win for our team."

Chaska is at Bloomington Kennedy on Nov. 4 and home to Robbinsdale Cooper on Nov. 5.

In control up two games, the momentum shifted the other way, this time Eden Prairie winning in five, handing No. 4-ranked Minnetonka its first loss of the season Oct. 29.

Eden Prairie's defense held Minnetonka to a hitting percentage of .111 with 31 errors to 48 kills.

Kate Simington (13), Kali Engeman (12) and Sonia Dahlin (11) were hitting leaders for the Skippers with Olivia Koeppen finishing with 39 assists.

Macy Osenga and Morgan Rooney each had three aces with Morgan Ryan and Abby Stanwood finishing with 15 and 10 digs, respectively. Engeman and Anna Shoemaker contributed six and four blocking points as well.

Minnetonka (6-1) is one game behind first-place Wayzata in the Lake Conference standings.

Short-handed in the first meeting on Oct. 8, Southwest Christian showed in the rematch with Belle Plaine Oct. 29 what the full-strength Stars look like.

The Stars are tied with Mayer Lutheran at 6-1 in the Minnesota River Conference, one game ahead of Belle Plaine.

No statistics were available for the match.

Southwest Christian is at last-place Le Sueur-Henderson on Thursday, Nov. 5.

The Fire lost in four games to the Jaguars on Oct. 27.

No match statistics were available.

Next up for Holy Family Catholic is a road match at Waconia at 7 p.m. on Monday, Nov. 2.