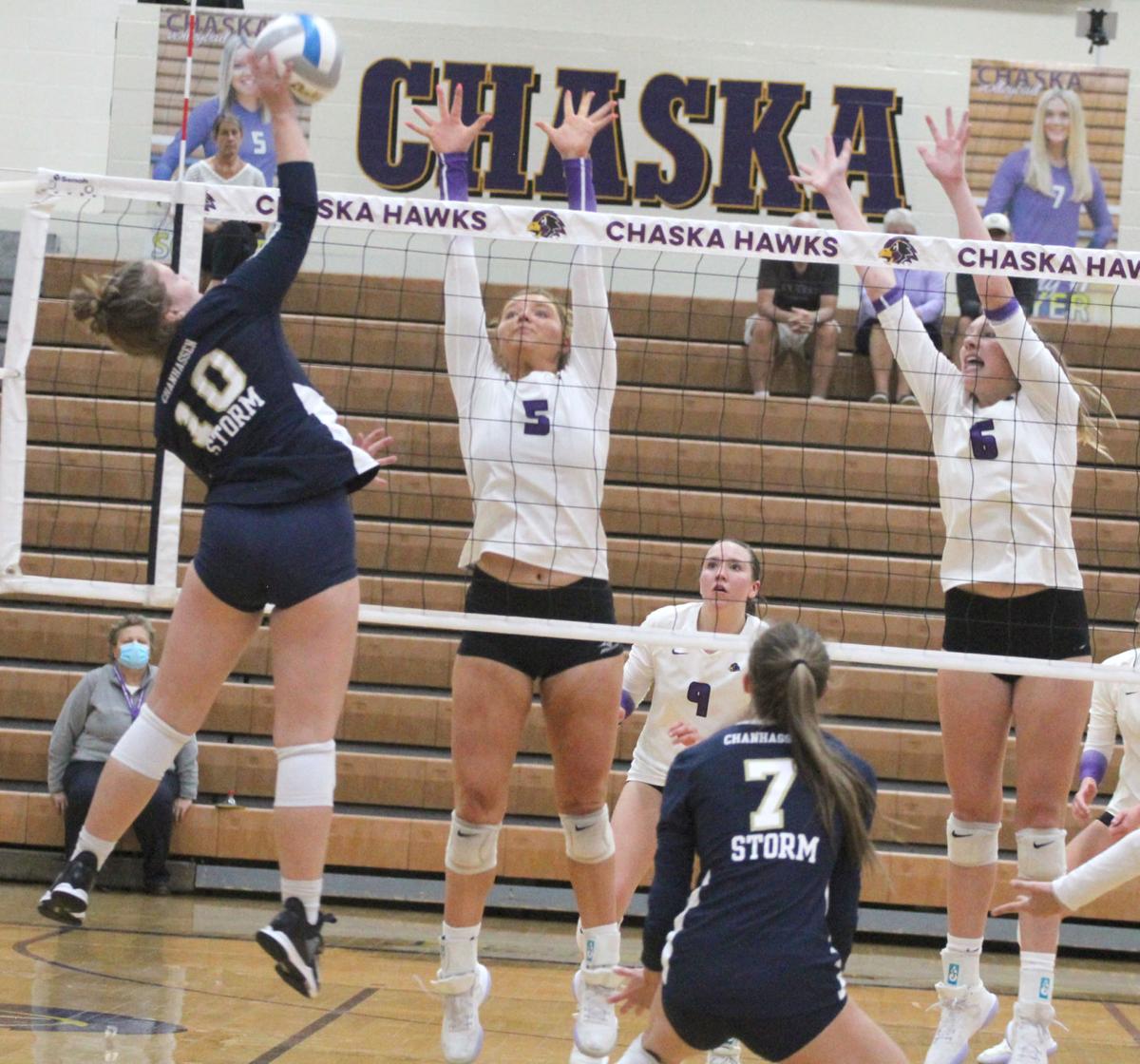 Chaska defenders Sam Schmidt (5) and MaKina Larson (6) rise above the net in a blocking attempt of Chanhassen hitter Haven Aumock. The Hawks beat the Storm for the 12th time in 16 all-time meetings Sept. 9. 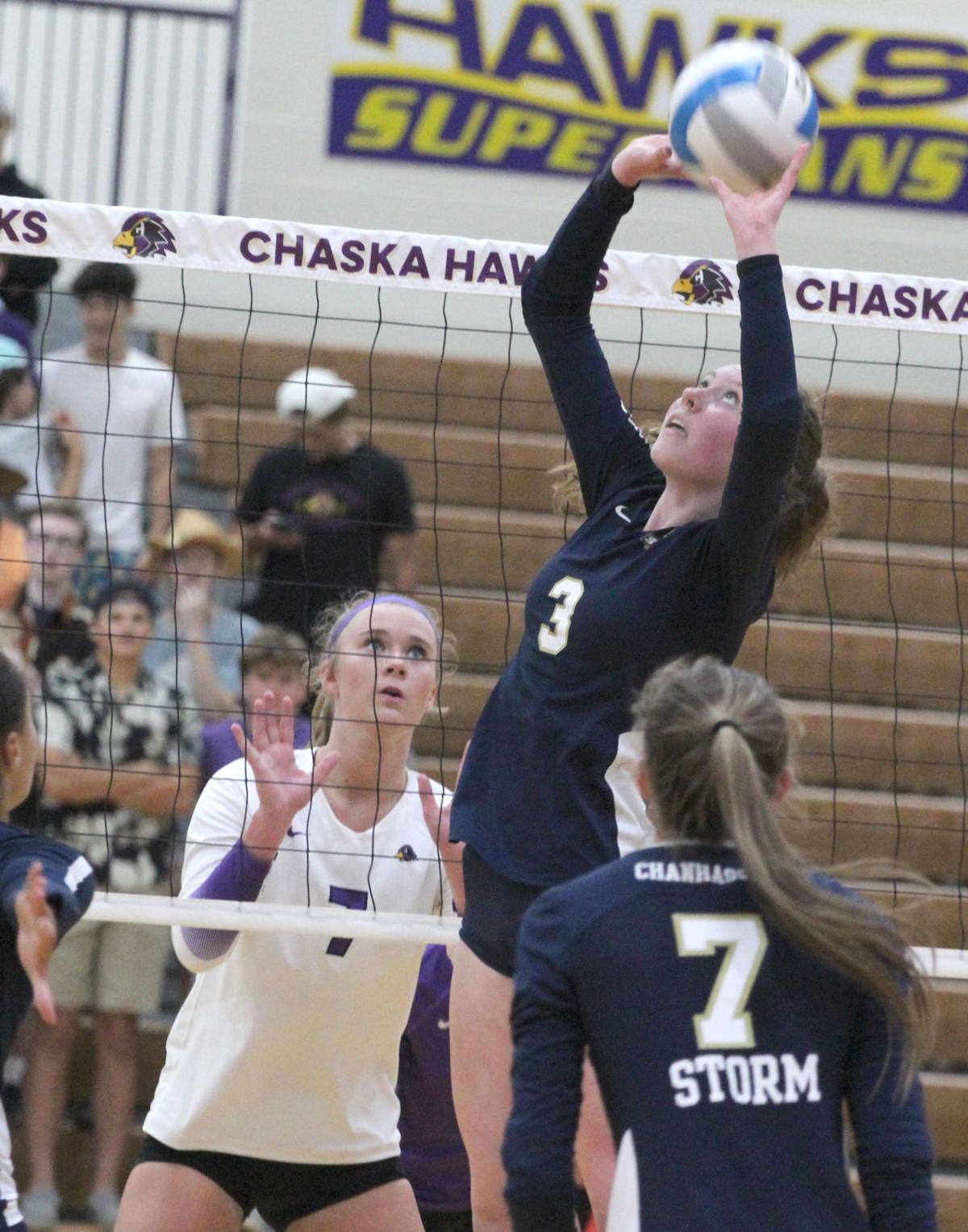 Ashlyn Steding paces the Chanhassen offense with her passing at the net. The Storm junior spent quite a bit of time at the service line, posting a big night with the serve. 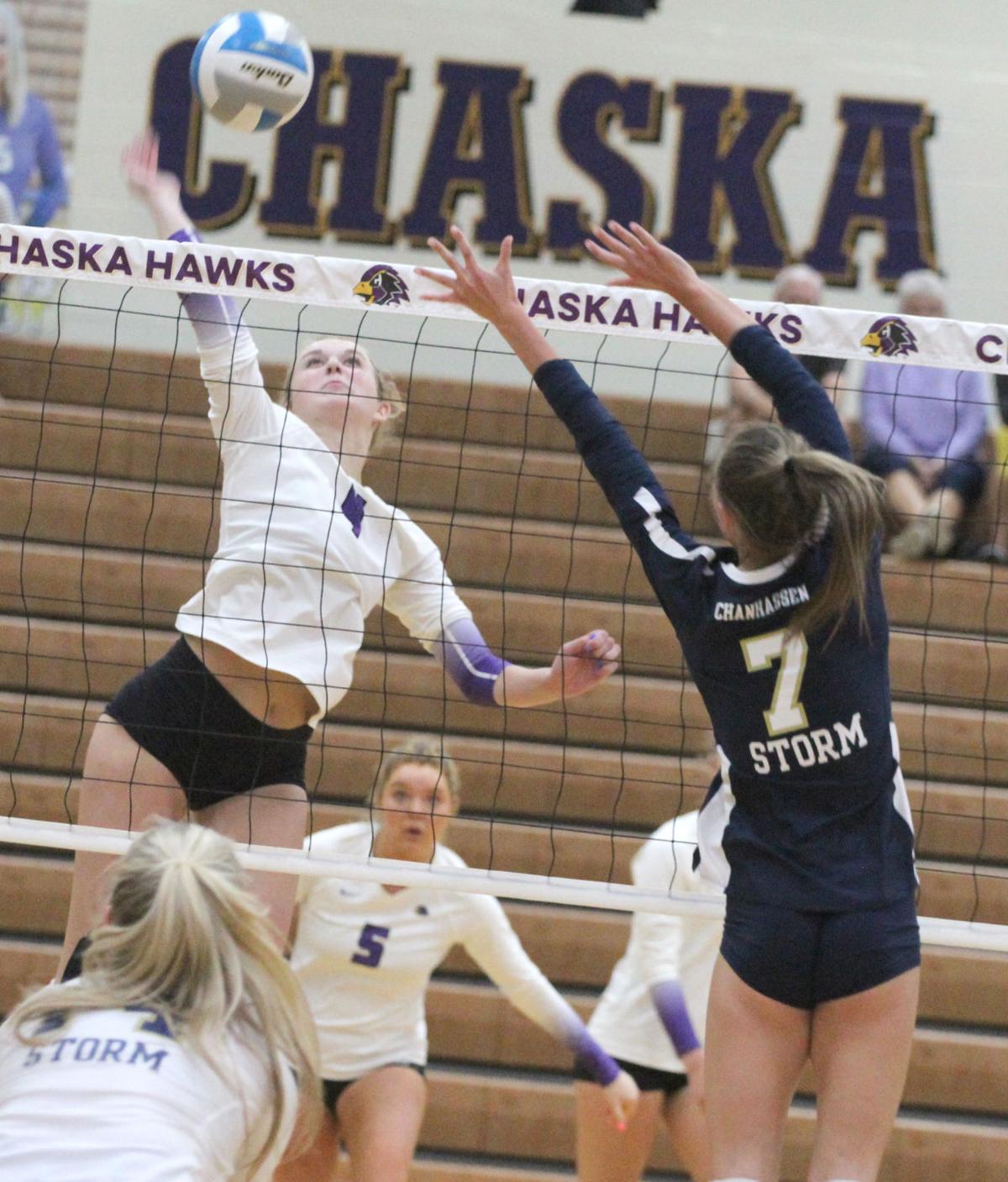 Chaska’s Avery Rosenberg rises up for the swing off a pass from setter Kiki Thompson in a 3-0 win over Chanhassen on Sept. 9. 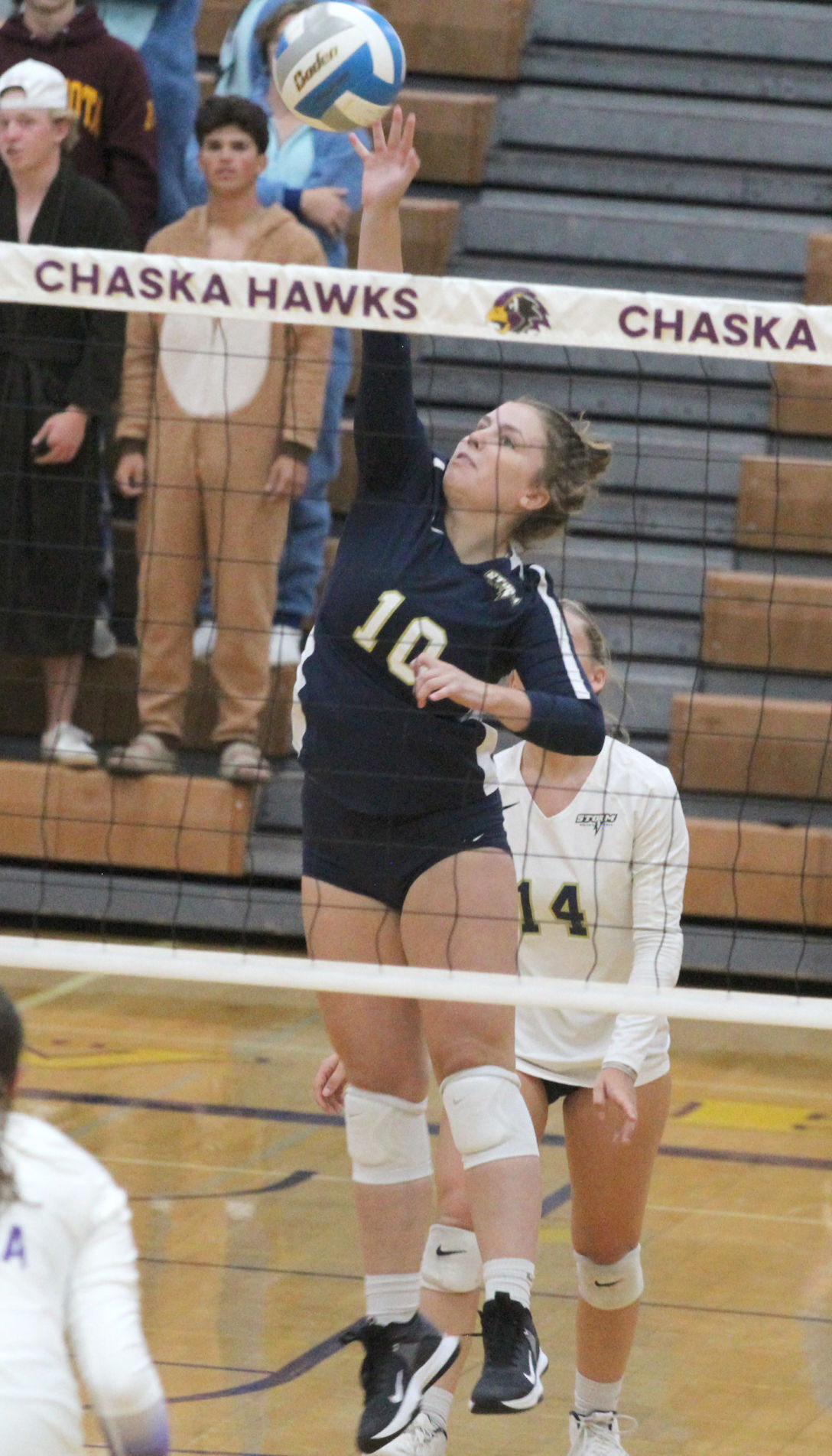 Haven Aumock, one of six seniors on the Chanhassen roster, finds open space on the outside for a second game kill in a match at Chaska on Sept. 9.

Chaska defenders Sam Schmidt (5) and MaKina Larson (6) rise above the net in a blocking attempt of Chanhassen hitter Haven Aumock. The Hawks beat the Storm for the 12th time in 16 all-time meetings Sept. 9.

Ashlyn Steding paces the Chanhassen offense with her passing at the net. The Storm junior spent quite a bit of time at the service line, posting a big night with the serve.

Chaska’s Avery Rosenberg rises up for the swing off a pass from setter Kiki Thompson in a 3-0 win over Chanhassen on Sept. 9.

Haven Aumock, one of six seniors on the Chanhassen roster, finds open space on the outside for a second game kill in a match at Chaska on Sept. 9.

The pass went up, the pass went down. It was that simple for Mallory Heyer in game one of Chaska’s rivalry match with Chanhassen Sept. 9.

But when the Storm sold out a bit more on Heyer, it opened the door for other hitters, most notably Sam Schmidt, one of five seniors on Chaska’s roster.

It was nearly a decade ago Schmidt was watching her older brother, Carter, in football, in hockey, in baseball, leading his Chaska teams. Now it’s her turn, and her growth in her game is noticeable this season.

In her hitting, in her defense, and in her serving. Schmidt finished with a career-high seven kills with three aces and a block in the win.

“I was happy with the way we played. Our defense is something we have really worked on and I thought we did a much better job tonight,” Schmidt said.

With that experience, and a setter in Kiki Thompson who has jumped right in, not missing a beat with the offense, Chaska has started the season in the top-10 in Class 4A.

“Kiki’s always been in this role. She really has a great feel for it. She’s a really good communicator. And when you need to tell her what you want her to do, that constructive criticism, she accepts and understands that we’re just trying to all be on the same page,” Schmidt said.

Chanhassen, in each of the first two games, held small leads. Ashlyn Steding spent half of the match on the service line, a team-high five aces with 14 assists, keeping the Hawks on their heels with a strong serve. Ellie Smith was effective in hitting, almost unstoppable when on the right side with seven kills on 16 swings.

Mary Cate Ziembiec had seven kills as well for the Storm with Chloe Rogers adding two aces and nine digs.

And while Heyer was contained for the most part the last two games, Chaska’s attack did not suffer. Thompson calling her own number five times on setter dumps over the net when not finding Schmidt, Christ and Rosenberg (36 assists).

“When the block is pulled, Kiki is super good at being able to see that and go another place, whether that’s the middle or the right side. It’s a numbers game sometimes. It’s way easier to hit when there’s one blocker or even no blocker,” Schmidt said.

Chaska, always one to serve aggressively, a good percentage of nearly 93 this season, had Chanhassen out of system at key points in the first two games. The third game tilted in the Hawks’ favor quickly as well.

“If we can keep a team out of system, we’re seeing a bunch of free balls, that’s one less thing we have to be worried about. Our main three things coming into the season were serving, blocking and defending. We know what we can do hitting the ball. It’s those other areas we’re really focused on,” Schmidt said.

Chaska, 4-1 overall, a solo loss to No. 1 Wayzata, plays in the Southwest Minnesota Challenge in Marshall Sept. 10 and 11. The Hawks open with Perham, while they will face either Eastview or St. Michael-Albertville in round two.

After not having tournaments in 2020, getting back on the road, spending an overnight with teammates, is something Schmidt is really looking forward to in her final season.

“These girls are amazing, and we’re going to go and play, have fun together. It’s my last year, just enjoying everything about it,” Schmidt said.

Chanhassen (3-2), which had a three-match win streak snapped, draws top-10 Eagan in the opening match of the Shakopee Invitational at 9 a.m. on Saturday, Sept. 11. Rochester Mayo is the other team in the pool.

SHAKOPEE 3, MINNETONKA 2No. 5 vs No. 8 in the state, both teams undefeated, what could a volleyball want more? How about a five-game match?

The Skippers gained a 2-1 lead, an Abby Stanwood back-row kill the difference in a close second-game win.

Shakopee, though, went to captain Maddie Lipetzky often, and she delivered, a dominating performance on attack. The Sabers also put up a strong blocking effort to frustrate the Minnetonka hitters.

The Skippers, 4-1 overall, head to a tournament at Waterville-Elysian-Morristown on Saturday, Sept. 11. Their pool consists of Grand Meadow, Tri-City United and Cleveland.

Chaska leads the all-time series with Chanhassen 12-4, including wins in two playoff meetings in 2010 and 2012