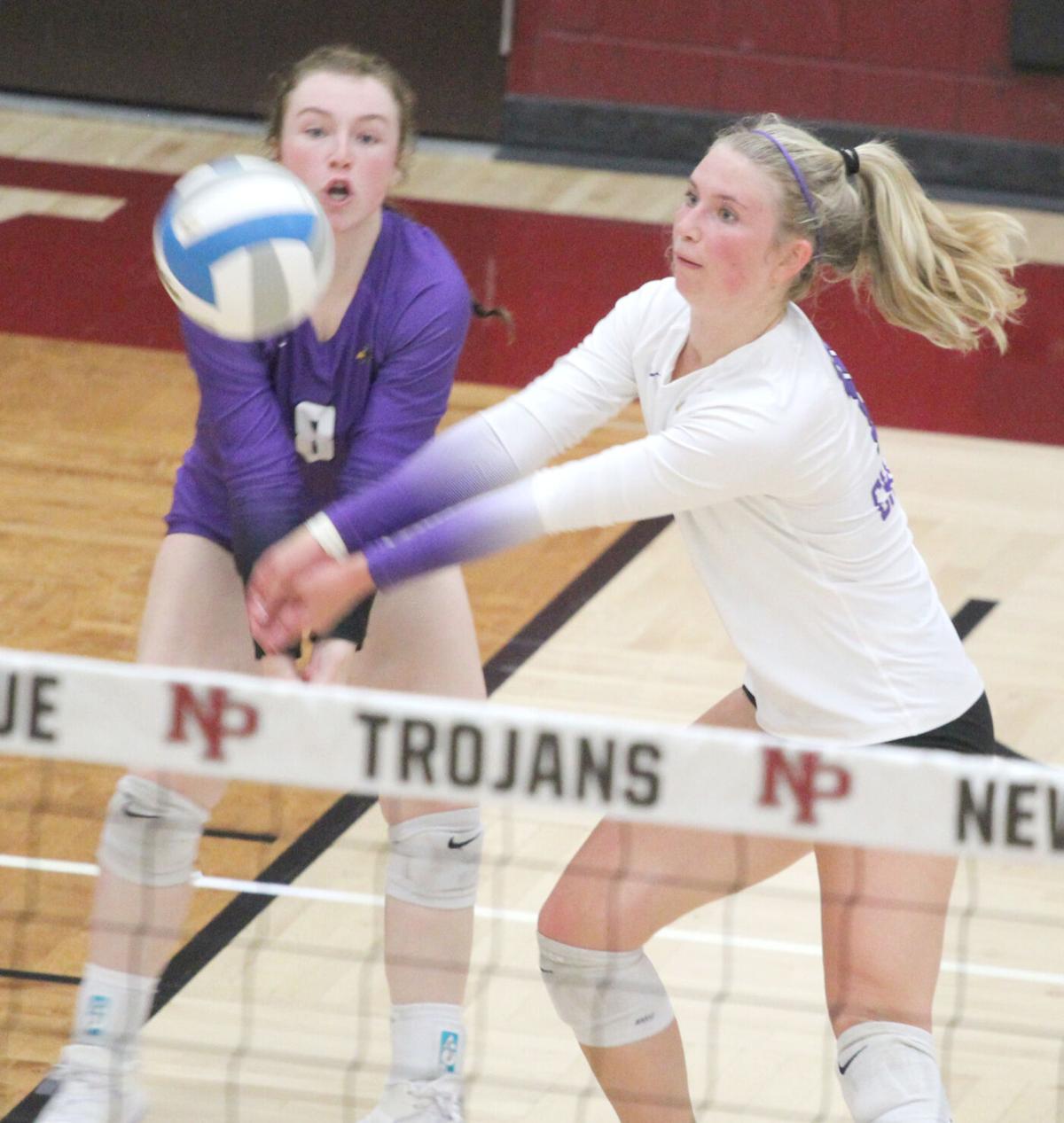 Chaska seniors Madi Niesche and Lucy Dardis are both prepared to receive a serve in game four of the Hawks’ top-10 win at New Prague on Sept. 28. Dardis recorded 15 digs, the second-most in her career. 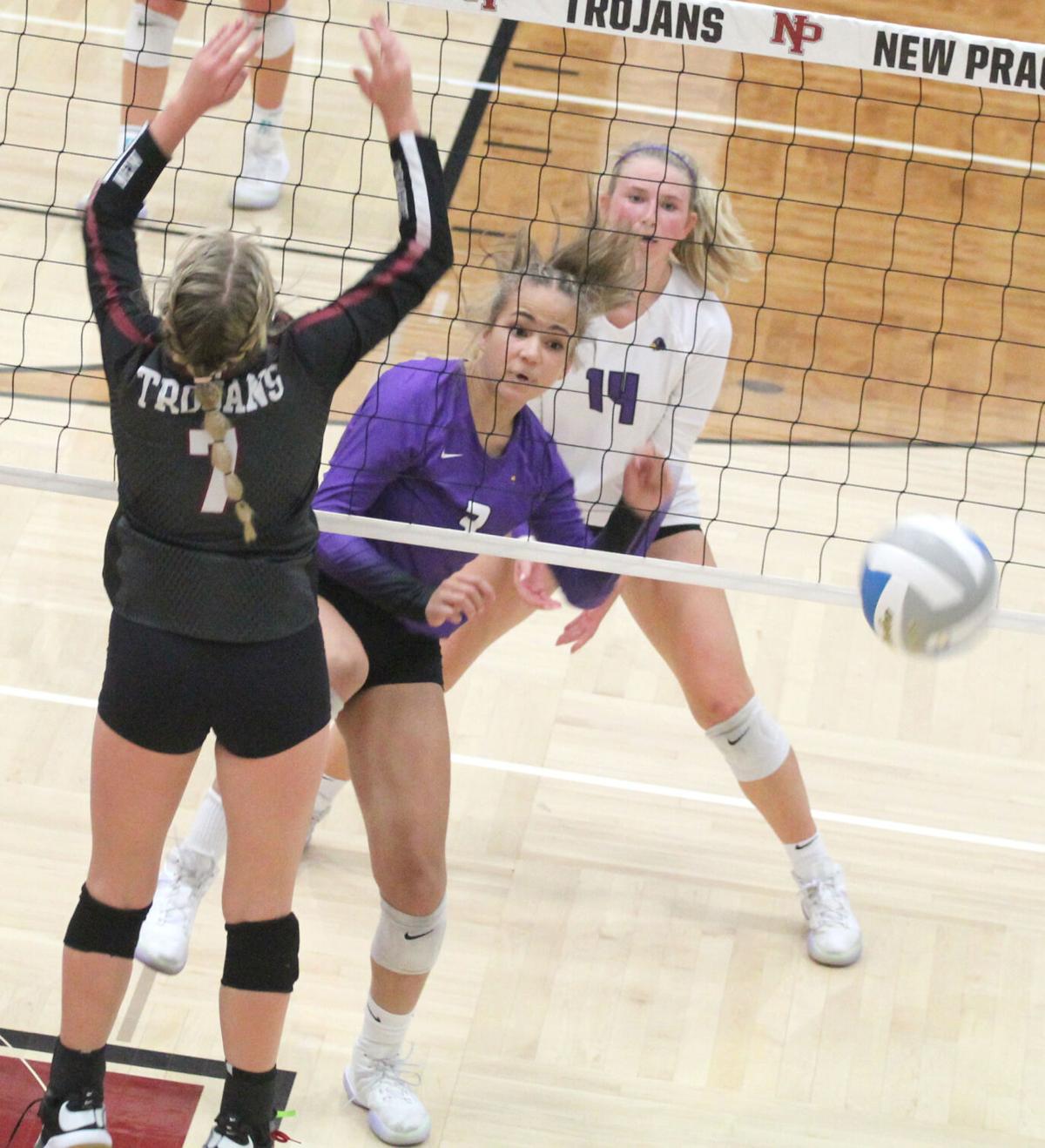 Freshman Ramsey Johnston came up big over games three and four, finishing with six kills on the outside for Chaska. 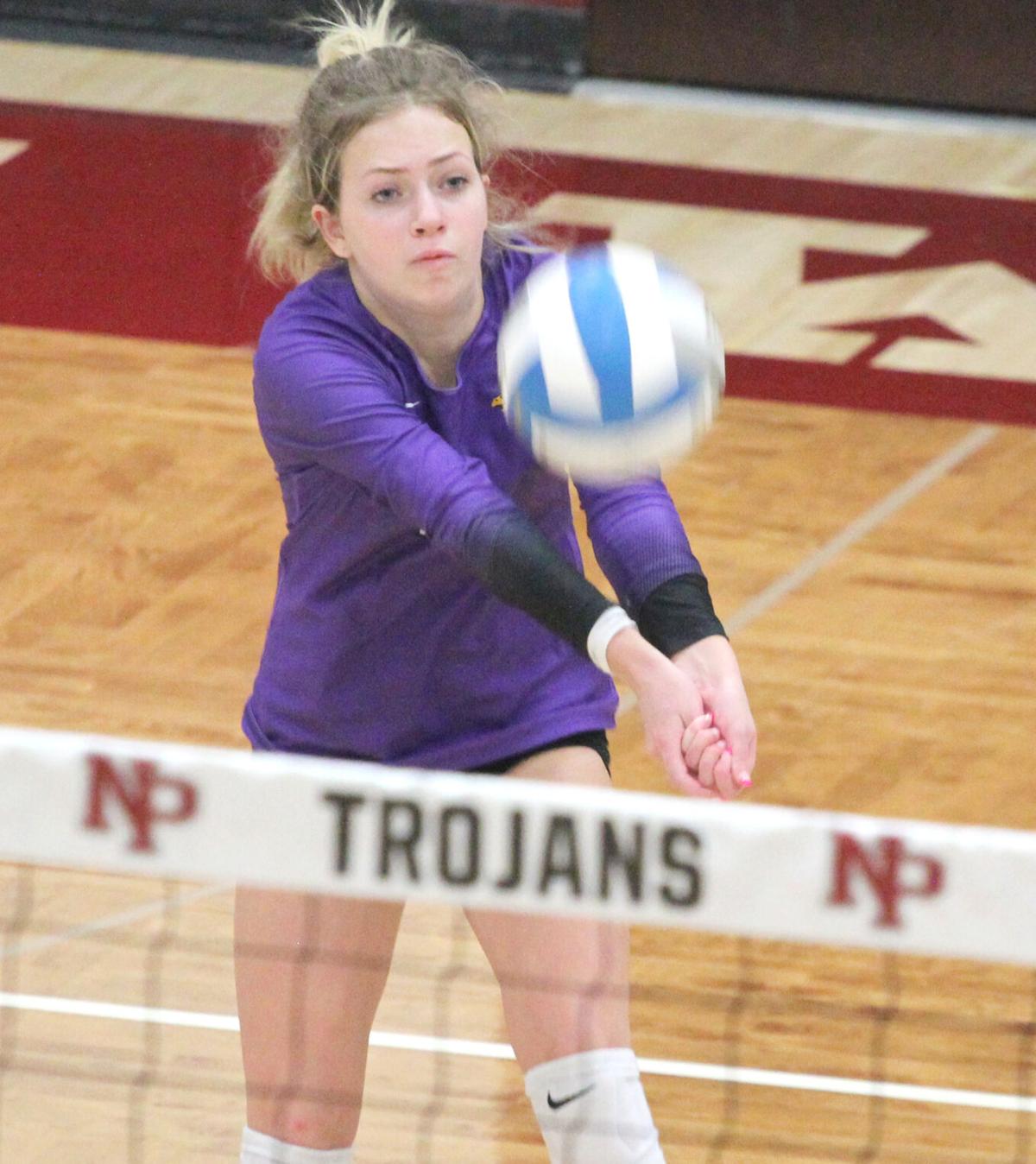 With older sister, Hannah, in attendance, having driven all the way from River Falls, Wisconsin, Chaska senior Macey Polk gave her something to cheer for, a 3-1 win over New Prague.

Chaska seniors Madi Niesche and Lucy Dardis are both prepared to receive a serve in game four of the Hawks’ top-10 win at New Prague on Sept. 28. Dardis recorded 15 digs, the second-most in her career.

Freshman Ramsey Johnston came up big over games three and four, finishing with six kills on the outside for Chaska.

With older sister, Hannah, in attendance, having driven all the way from River Falls, Wisconsin, Chaska senior Macey Polk gave her something to cheer for, a 3-1 win over New Prague.

If Chaska receives serves well and passes well on defense, they can be an elite volleyball team. When they don't, opponents pounce. The play goes the other way.

Tuesday's Metro West Conference match at New Prague, the Hawks and Trojans both undefeated in league play into the night, was a perfect illustration for the defensive numbers.

When Chaska had 20 or more digs in a game, gave up minimal free balls sent over the net, they dominated. The Hawks held New Prague to nine points in game one, and 13 in game four.

Recording just 10 digs, sending seven free balls to the Trojans in game two, Chaska opened the door. It was the same story in game three with nine total digs and five free balls sent. Luckily for Chaska, they had a hitting percentage nearly four times better than New Prague, and were able to claim one of those games.

"We learned a lot about our defense in the back row this past weekend. How to read the ball off blocks, really how we need to react in certain situations. It's something we're constantly working on, trying to improve on," Chaska's Lucy Dardis said.

Dardis, one of four senior defensive specialists on Chaska's roster, played sparingly the first two matches of the season. By the fourth match she was wearing the libero jersey, four times this season she has recorded double-digit efforts in digs, including 15 versus New Prague.

At times, defense, or lack thereof, is a defining point in wins and losses for Chaska. Seven times this season (statistics were not available for four tournament matches in Marshall), the Hawks have had five or more serve receive errors.

An area -- the first pass -- of a great importance, and something Coach Sue Murphy continues to practice on daily.

"We've been practicing a lot on our passing and our serve receive. It's something we've been up and down with this year. I think this game we started to see some progress, that the work we're putting in, is coming out in the match," Dardis said.

From the start, Chaska was the aggressor versus New Prague. Sam Schmidt, MaKina Larson and Kiki Thompson were a wall at the net. At times Mallory Heyer, who had a match-high 19 kills, brought out a shocked look or two from Trojan defenders with her swing. New Prague couldn't figure out Avery Rosenberg's serve, resulting in five aces.

In the end, Chaska matching New Prague's defensive numbers, serving numbers and blocking numbers, it was the Hawks' front-row attack that was the difference. Chaska had a good hitting percentage of 22 versus six for the Trojans.

Heyer and Rosenberg led the team in hitting with 19 and 11 kills, but down the stretch it was the play of freshman Ramsey Johnston, getting a look on the outside with Ella Christ sidelined in a boot.

Schmidt (seven), Thompson (six) and Larson (three) had their moments offensively as well. Larson smacked down a no-doubter on a free ball in the middle.

Joining Dardis in the back row were classmates Madi Niesche (eight digs), Macey Polk (five digs) and Heyer in a full six-spot rotation with 13 digs. Polk added two aces with Dardis and Polk handling 47 of the 66 serve receptions.

"It's so exciting to be back with this team, having a semi-normal year. Just getting to be a part of everything again. It's fun," said Dardis, a member of the 2021 Chaska girls basketball state championship team as well.

Chaska, 12-5 overall, the leader in the Metro West Conference at 5-0, one game ahead of New Prague, Chanhassen and Bloomington Jefferson, who the Hawks play Oct. 12, get another test in No. 4 Shakopee at 12:30 p.m. on Saturday, Oct. 2.

The Sabers are 15-2 on the season, both defeats coming in a recent tournament in Apple Valley to No. 2 Eagan and No. 3 Eden Prairie.

No. 1 vs No. 1, a full house in the stands at Southwest Christian High School.

While no longer Minnesota River Conference rivals with Mayer Lutheran, the atmosphere and the play felt like a league title was on the line.

The Stars rallied from a 6-2 deficit in game five, scoring three straight points to claim a lead at 11-10. Annika Veurink's swing off a back row defender's hands proved to be match point.

What a match between two of the best teams in the state. #HJSports pic.twitter.com/ravF7C6014

Finishing strong is something Southwest Christian did all night, using a 7-1 run to close out game two. Down eight points in game three, 18-10, the Stars scored 12 of the next 14 points. A late rally in game four drew Southwest Christian tied at 22.

Mayer Lutheran setter Emma Lade passed 2,000 assists for her career in the loss; the first in 18 matches this season for Class A's top team. In fact, Mayer Lutheran entered the match having loss just three games all season.

Steding (20 assists), Amaya Plath and Steding (four aces each) and Chloe Rogers (five digs) were other top players for Chanhassen, which is 4-1 in the Metro West Conference and 12-6 overall.

The Storm, one of three teams tied behind league leader Chaska along with New Prague and Bloomington Jefferson, host the Jaguars on Oct. 5.

The Trojans, ranked No. 1 in Class 4A, are 17-0 overall, having lost two games all season.

Abby Stanwood totaled 14 kills, one-third of the Skippers' team points, and one-half of their attack points. Kate Simington was also in double figures with 11 kills.

Anna Lockwood finished with 28 assists with Morgan Ryan and Nora Arndt leading the defense with nine and eight digs, respectively.

Lorelei Wilson had a career-high 14 kills followed by Sophia Mackey (13) and Sonja Laaksonen (nine) with Zoe Schuele finishing with 44 assists.

Holy Family Catholic was credited with 92 digs with three defenders with 20-plus in Kalah Worm, Laaksonen and Schuele.

Tatum Hussey had seven aces from the service line with Molly O'Connor leading the defense with 13 digs.

Holy Family Catholic is at Mound-Westonka on Thursday, Sept. 30.