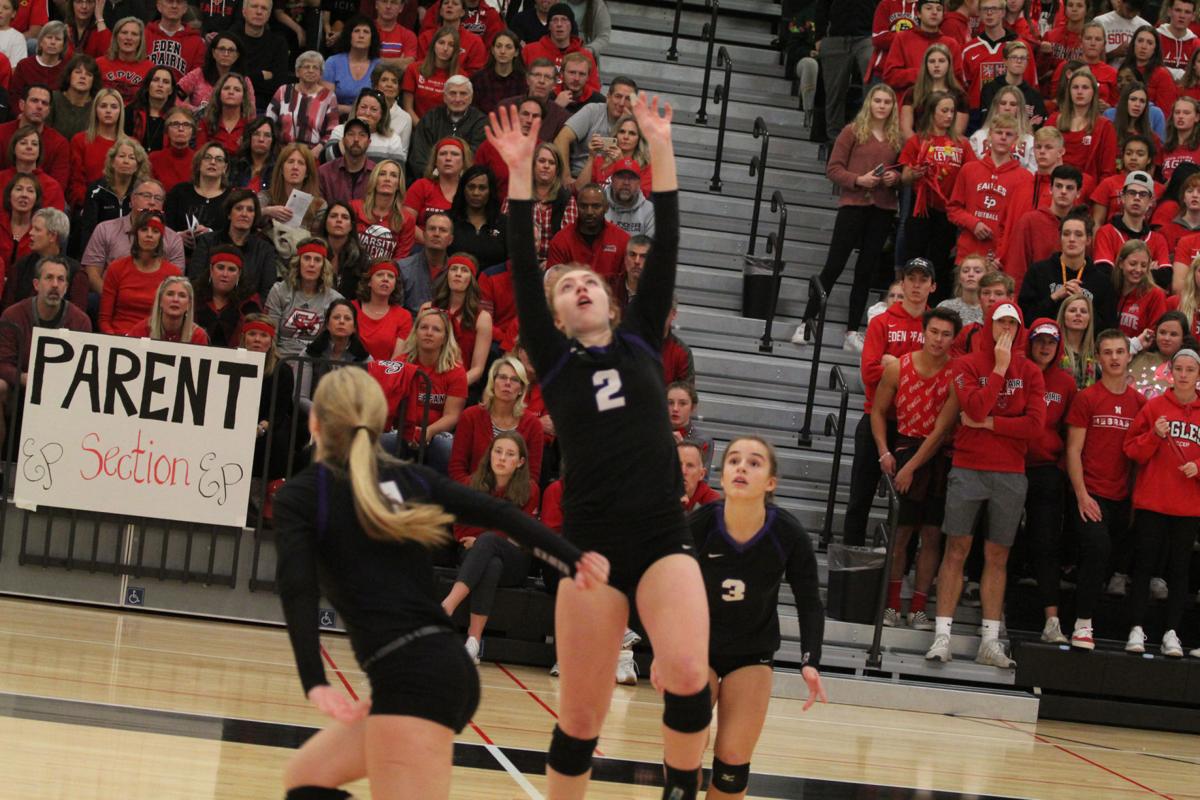 A sea of red behind her, setter Hannah Polk works a pass to middle Jordan Campbell for Chaska at Eden Prairie Oct. 29. 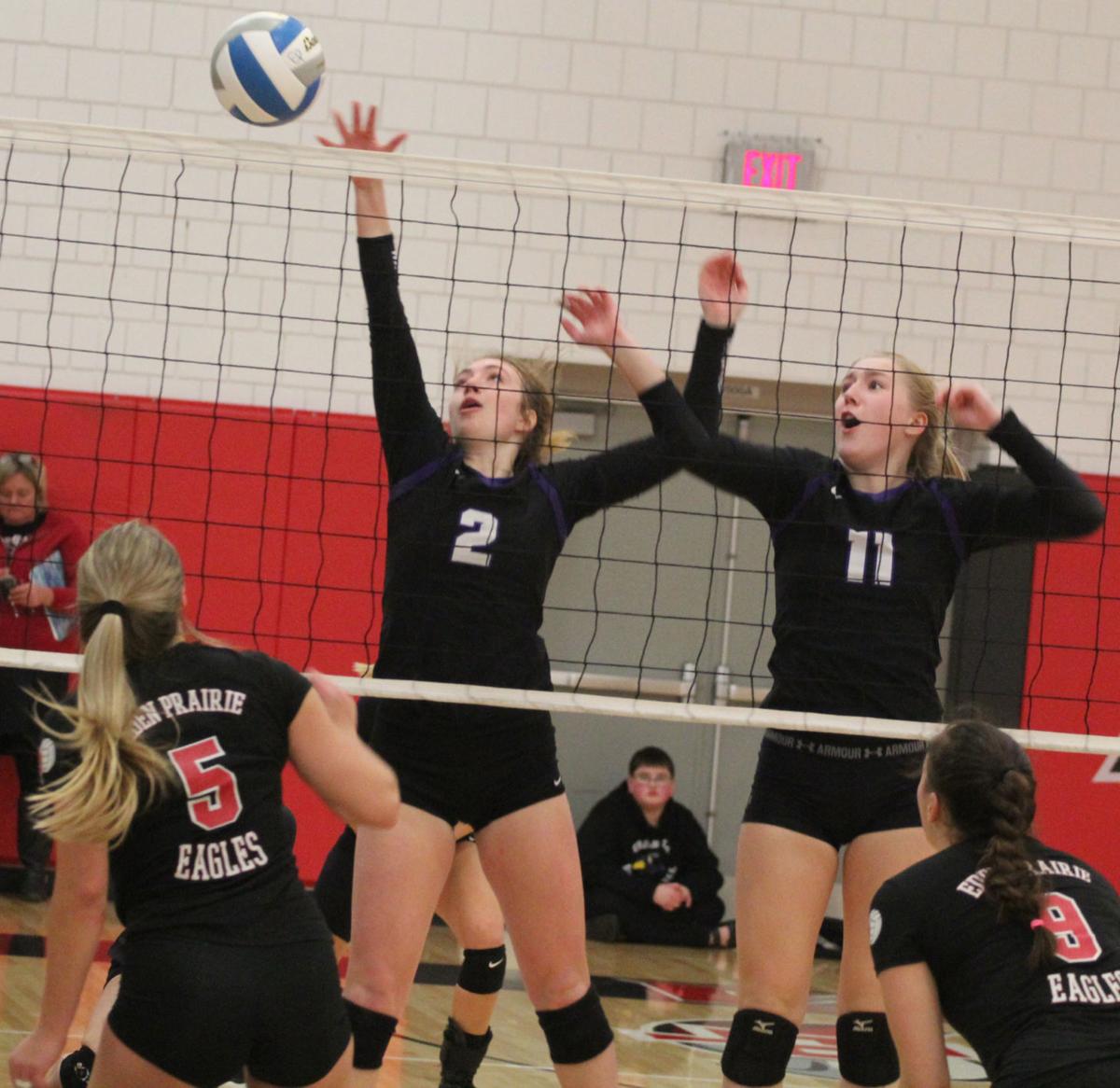 Hannah Polk (2) hangs up high to get a hand on a tipped shot from Eden Prairie's Izzy Thorne in a Section 2AAA semifinal match Oct. 29. 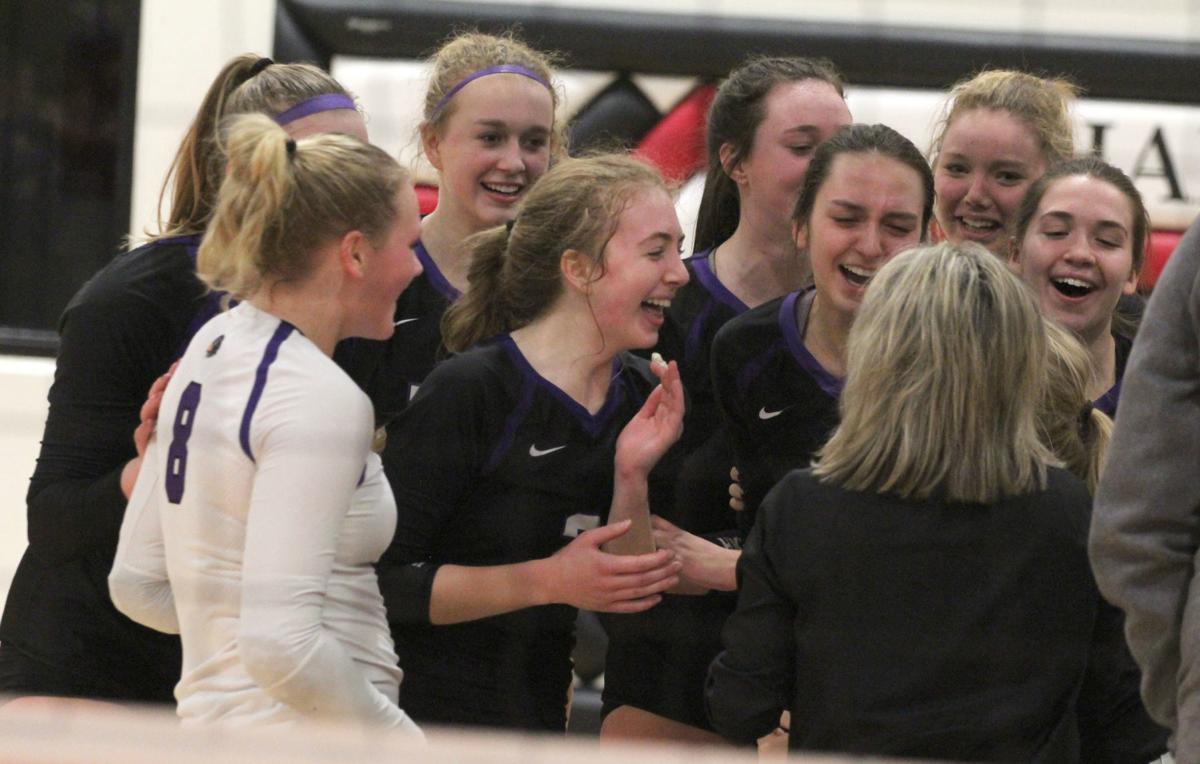 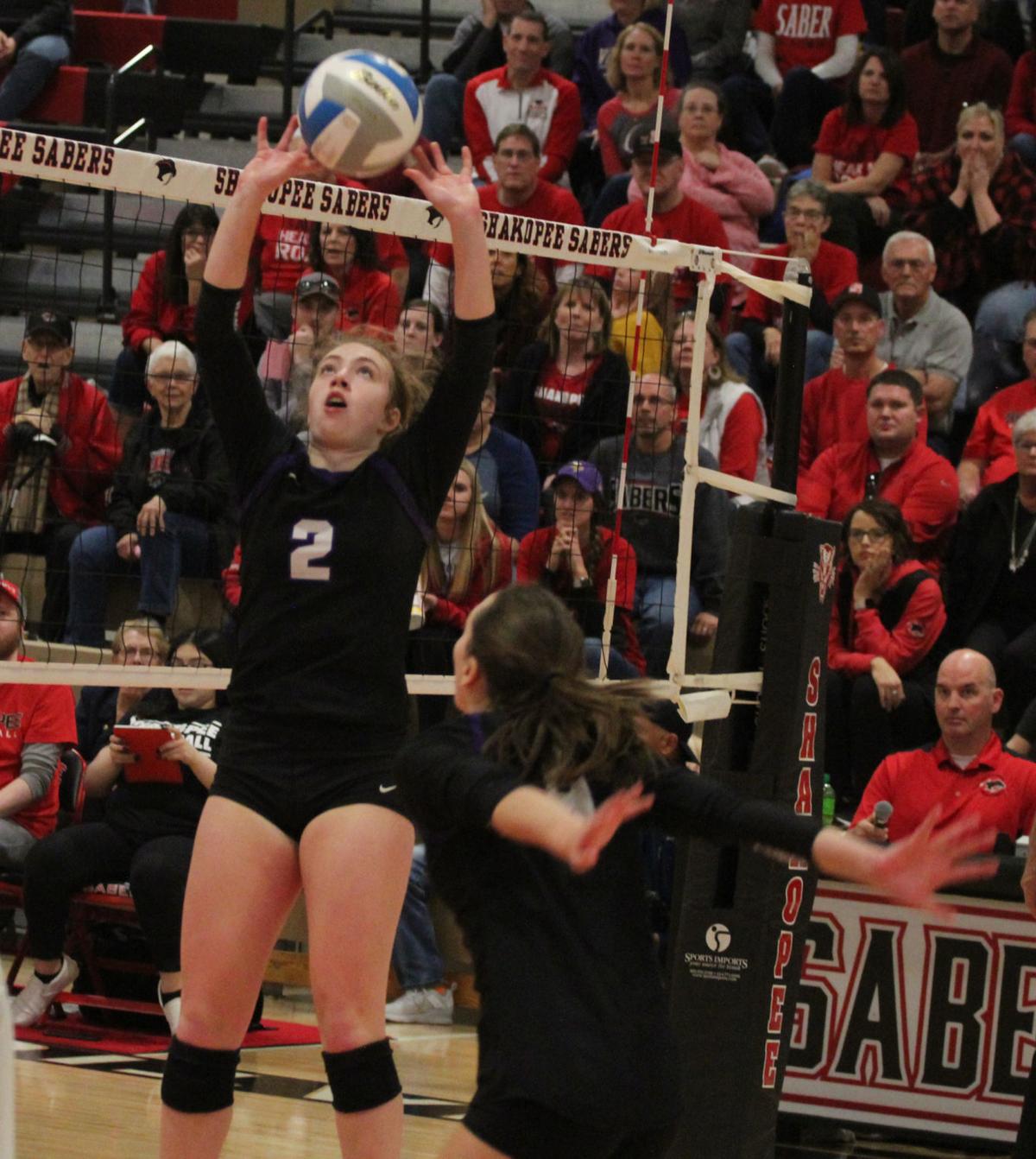 Hannah to Hanna, Polk to Thompson, for a swing at the net for Chaska at Shakopee on Oct. 25.

A sea of red behind her, setter Hannah Polk works a pass to middle Jordan Campbell for Chaska at Eden Prairie Oct. 29.

Hannah Polk (2) hangs up high to get a hand on a tipped shot from Eden Prairie's Izzy Thorne in a Section 2AAA semifinal match Oct. 29.

Hannah to Hanna, Polk to Thompson, for a swing at the net for Chaska at Shakopee on Oct. 25.

Makayla Wenzel was just about to start her first year at Chaska High School when she stepped onto the volleyball court on Aug. 27, 2011. The freshman found herself starting at setter.

The Hawks lost the match in three games.

By her senior season, now a four-year starter for Chaska, confidence level had risen for Wenzel. She was the quarterback of the offense.

The Hawks dropped just one game in six post-season matches, beating Eagan in three games to win the 2014 Class 3A State Championship.

"We definitely grew as a team. I learned where to place the ball. I got close with my hitters, knew where they wanted the ball. It's different with every player. We worked so much in practice on all of that," Wenzel said.

Wenzel, who played two seasons at Minnesota State University, Moorhead, in 2015 and 2016, totaling 938 assists in her second year after redshirting as a freshman, watched the Hawks often this season after graduating from the University of Minnesota earlier this year.

She even presented current Chaska setter Hannah Polk with a game ball in recognition for 1,000 career assists earlier this season. A statistic Wenzel knows something about. She is the program's all-time leader with 3,800 assists, and single-season record holder with 1,114 as a senior in 2014.

Wenzel worked with Polk a few summers ago. What she sees in Polk now is someone who is taking charge, who is leading, for the Hawks.

"You need a smart setter. and Hannah is most definitely that. It's about who you set and when you set them. When you have a hitter like Mallory (Heyer), who just crushes the ball, you know the block is going with her, so you have to look to other players. She's using all of her hitters right now," Wenzel said of Polk.

Maybe the aspect she's most impressed with is Polk's footwork. Something they call "beating your feet to the ball." Getting to the spot of the pass before the ball arrives to avoid the double call.

"She does such a great job with that, avoiding the double. I also like how (Hannah) feels so confident in reversing the ball, back setting. That pass is always there," Wenzel added.

Watching Chaska during the late-season run, a pair of wins over No. 1-ranked teams in Mayer Lutheran (Class A) and Stewartville (Class AA) into three post-season victories, what stands out is their defense and their relentless attack.

When the first pass finds Polk, more times than not an in-system hit comes next.

After working with Polk for multiple seasons, some for five years dating back to the Chaska Juniors 14s team, the connection between setter and hitter is undeniable.

"Confidence is a big one. She's grown a ton. Understanding where the opponent block is and where to feed hitters is getting there. She's finally feeding middles on out-of-system, too," Chaska head coach Sue Murphy said.

The evolution of Polk's setting ability from her first varsity action as a sophomore to her senior season is a big reason why Chaska plays Saturday in the Section 2AAA finals against sixth-ranked Minnetonka at Prior Lake High School. Match time of 5 p.m.

Polk orchestrates the offense, but she's also been just as good in the blocking department and on defense when the ball is hit toward her.

"All about timing. You don't even have to kill the block. It's about frustrating them with the block. Imagine if every time Mallory went up and the setter got a piece of it. Hannah does that to hitters," Murphy said.

Wenzel, Murphy's niece, is one of three of sisters to have won state titles in the Chaska program. Siblings Rachel and Brittany did so in 2005 and 2006.

To see the Hawks one match away from the state tournament floods plenty of good memories back to Wenzel.

"I saw today, it's the first section final since 2014, our team, for Chaska. Those were the best games to play in. The crowd was going crazy. It was so loud. So much fun. I really hope Saturday brings that for them. That feeling of qualifying for state," Wenzel said.

For Murphy, she thinks back to something she repeatedly said to this group five years ago.

"You'll get there. We'll get to state," she recalled. "I'm so focused on this one. If we pass the ball like we can, I really like our chances. We could be heading to state."

Chaska will play in its sixth section championship match in the past 12 years at 5 p.m. on Saturday, Nov. 2 against No. 6-ranked Minnetonka at Prior Lake High School.

A look back at recent history:

2014: Chaska lost twice to Prior Lake in the regular season (Chaska lost just three times that year), but swept the Lakers at Chanhassen High School in the championship round. The Hawks won state over Eagan the following week, its first title since 2006.

2013: Two tournament losses to No. 1 Eagan the lone blemishes on the Hawks' record, Chaska was upset in five games by Delano at Chanhassen High School. The Hawks had lost just 10 total games in 28 previous matches.

2012: The first of three straight section finals, the Hawks were no match for Shakopee, a team they beat in four games earlier in the season. Chaska started a number of sophomores and a freshmen libero.

2009: Chaska took undefeated Shakopee and star player Ashley Wittman to five games in a loss at Chanhassen High School. Shakopee had lost just one game all season, a streak of 27 matches won in a sweep. The Sabers went on to win a third straight state championship.