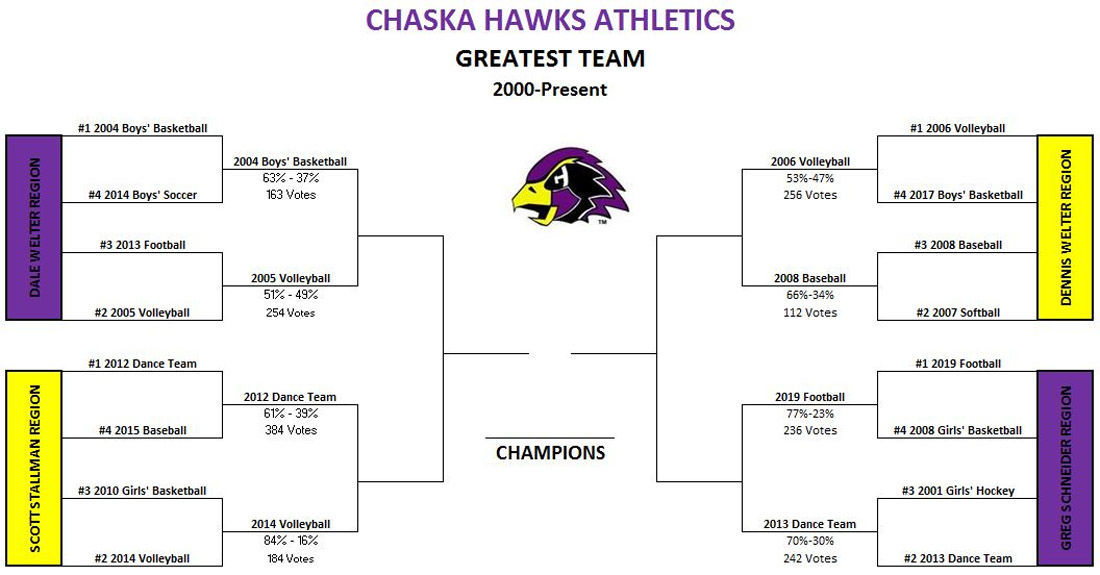 For The Record: 30-2 record, Class 4A State Championship win over Burnsville 71-57; Spencer Tollackson, who played at the University of Minnesota, was named Mr. Basketball, Minnesota Gatorade Player of the Year and Associated Press Player of the Year. The Hawks won 23 straight games and were Lake Conference champions with a 17-1 record. Chaska beat Prior Lake, Minnetonka and Hopkins in Section 2-4A play. Nine players from the team competed at one level or another in college, including Tollackson at the University of Minnesota, Nick Burns at St. John’s University and Josh Korth won two national championships at Division II Winona State University.

THE SCOOP: Dan Pelowski wanted to see the Class of 2014 boys basketball players through before retiring from the head coach position. Outside of Lee Isaacson, who moved into the district as a junior, most had played together for seven years into their senior year.

"We had all been playing together since we were little kids. There's a certain amount of trust and cohesiveness that we had when you play with someone for so long. There was this general care for each other. I just remember in practice and in the games, everyone was so competitive in trying to push each other," Spencer Tollackson said in 2014 at a 10-year team reunion.

"I'd be surprised if any of the teams we played had a core group of seniors like us since fifth grade. I think that was our biggest advantage. We all just molded so well together. We had 3-pointer shooters. We had inside presence. We had great bench players and overall there wasn't a guy on it who shouldn't have been," Nick Burns said.

"It takes a community that is willing to work with these kids. They were on traveling teams growing up. That's the work that everyone puts in, and the players themselves had to be willing to put the work in, too. They had trust in each other and they came together as a team," Pelowski said. "We were just a true team."

Along with Tollackson, Stark and Isaacson were named to the all-tournament team. Point guard Jason Theis and Josh Korth were also played pivotal roles in the championship.

"All the hard work and all the sweat and tears put in growing up together finally paid off. We had a disappointing junior year, but we were able to come back and bounce back and learn from that and win it all," Burns said.

For The Record: 32-1 record, Class 3A State Championship was won 3-2 over Marshall. First of back-to-back titles for the Hawks. Eight members of team went on to play in college. Lone loss came to Apple Valley in tournament match. The Hawks beat the Eagles 3-0 in the playoffs. Chaska won all four Section 6-3A matches in three-game sweeps. They topped Andover and Hibbing in first two rounds of state. Chaska won all 10 Lake Conference matches in three-game sweeps.

The Scoop: Thirty-two matches into the season, Chaska volleyball was faced with a situation they had only seen twice in the 2005 schedule. One game to decide it all.

How would the Hawks respond?

"By taking the focus off of achieving the 'state title championship' and coming to reality of focusing on the moment, game five, 15 points, and playing one point at a time," Brittany Wenzel, a sophomore setter on the team, said. "Not to forget the incredible support we had from superfans, family, classmates, friends, and the community firing us up, along side of the passion we had for volleyball and playing together as one!"

Chaska made it look easy, capturing the program's fifth state title with a 15-7 score.

What made the Hawks so touch in 2005 was balance. Opponents never knew where Wenzel was going. That was the takeaway from Marshall head coach Dan Westby. "They have so many weapons offensively," he said after the championship.

After finishing fourth at state in 2002, fifth in 2003, and suffering a tough section final defeat to Eden Prairie in 2004, the 2005 state championship title reestablished Chaska as a team to beat in volleyball around the state.

"It feels like bricks have been lifted from our shoulders," Coach Sue Murphy said at the time.

"I feel blessed to have been the setter of these two teams full of amazing talent. There was always a special and unique connection we had on and off the court. What stood out most is the vision we saw through the long hours and dedication to intense training to accomplish our rising moments," Wenzel said.