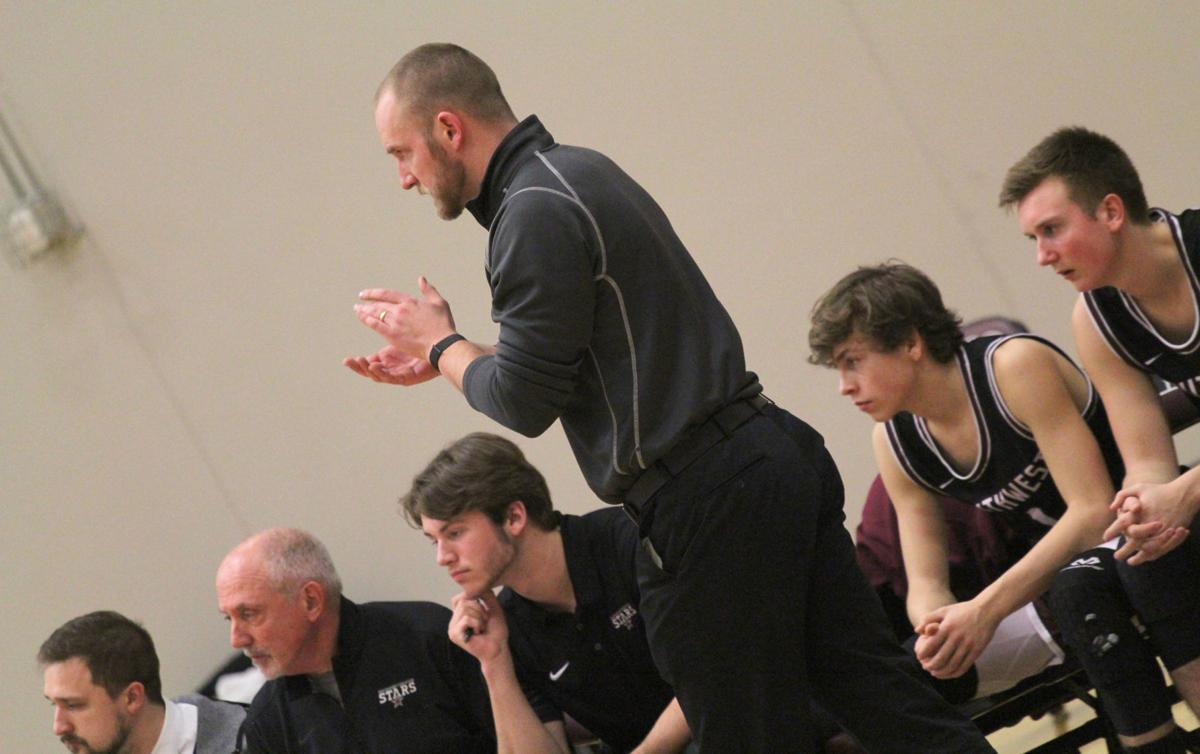 Kit Avery, in his eighth year as head coach of the Southwest Christian boys basketball team, set five standards in humility, passion, unity, servanthood, and thankfulness to guide the path of the program. 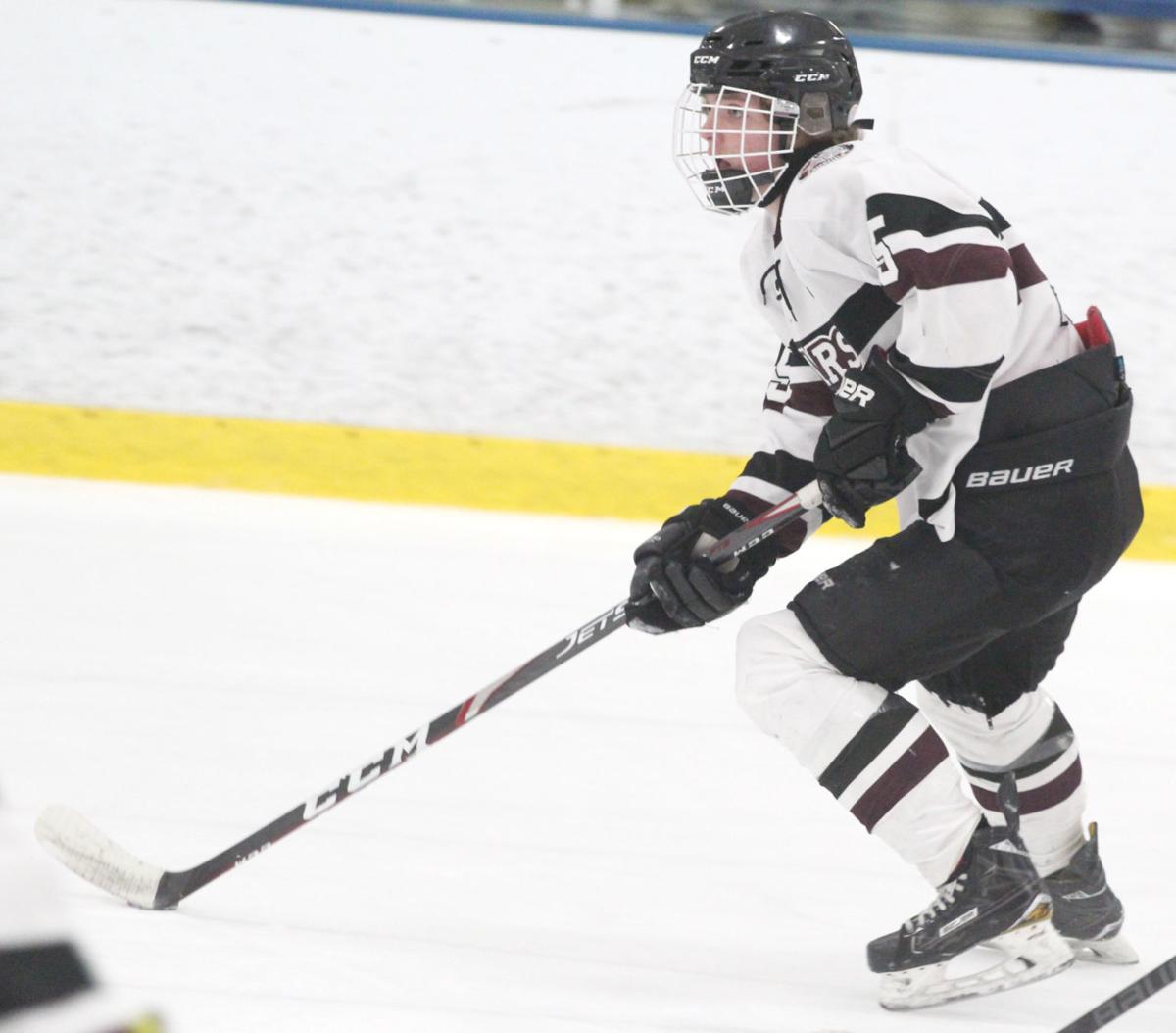 Jeremiah Konkel transferred to Southwest Christian after his freshman season, a key contributor to the program in its first three years of varsity hockey with the Richfield co-op. 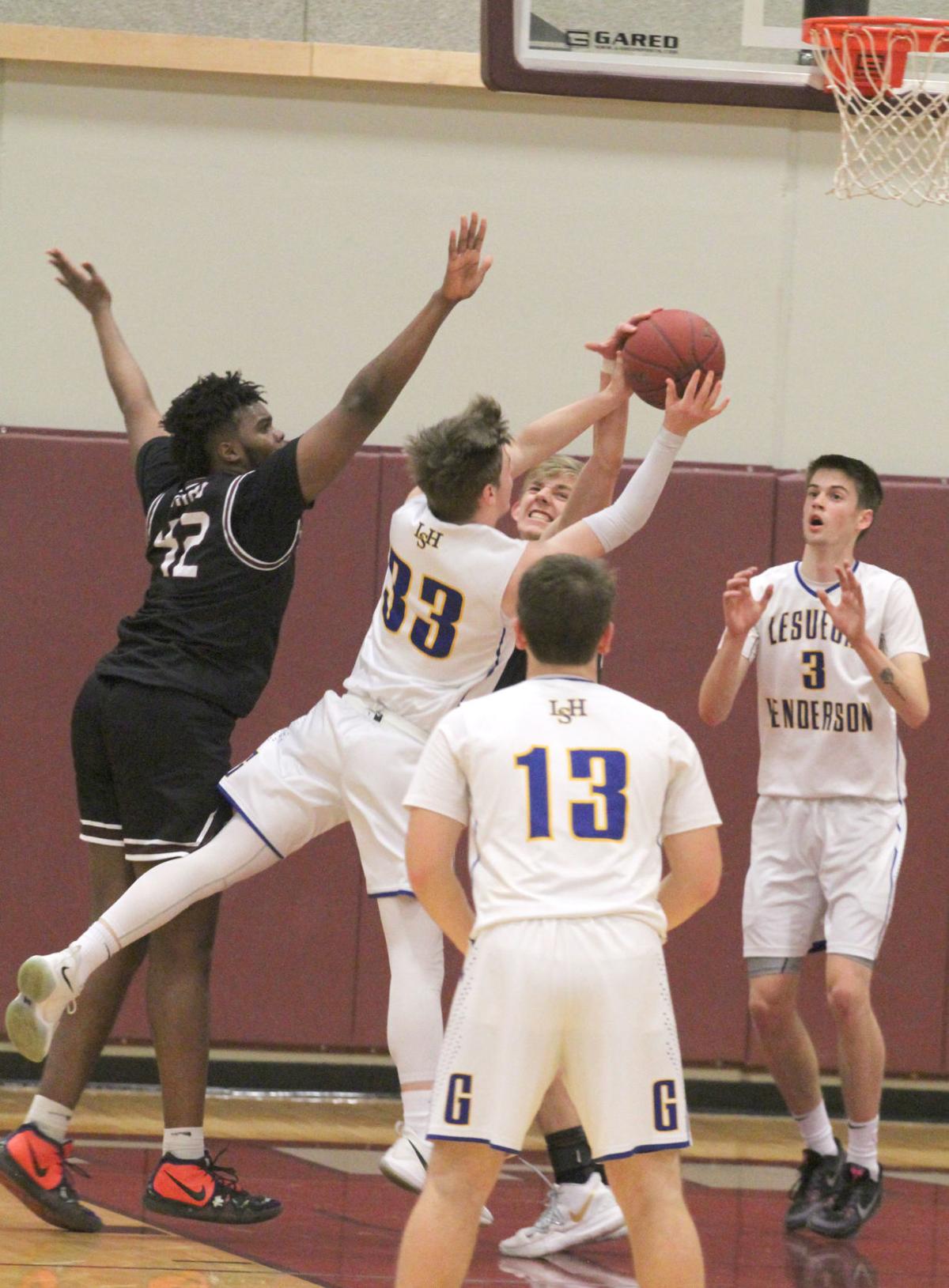 Brayden Zimmernan gets his hand on top of the ball, forcing a jump ball and possession late in the game in a Southwest Christian win over Le Sueur-Henderson Jan. 16. 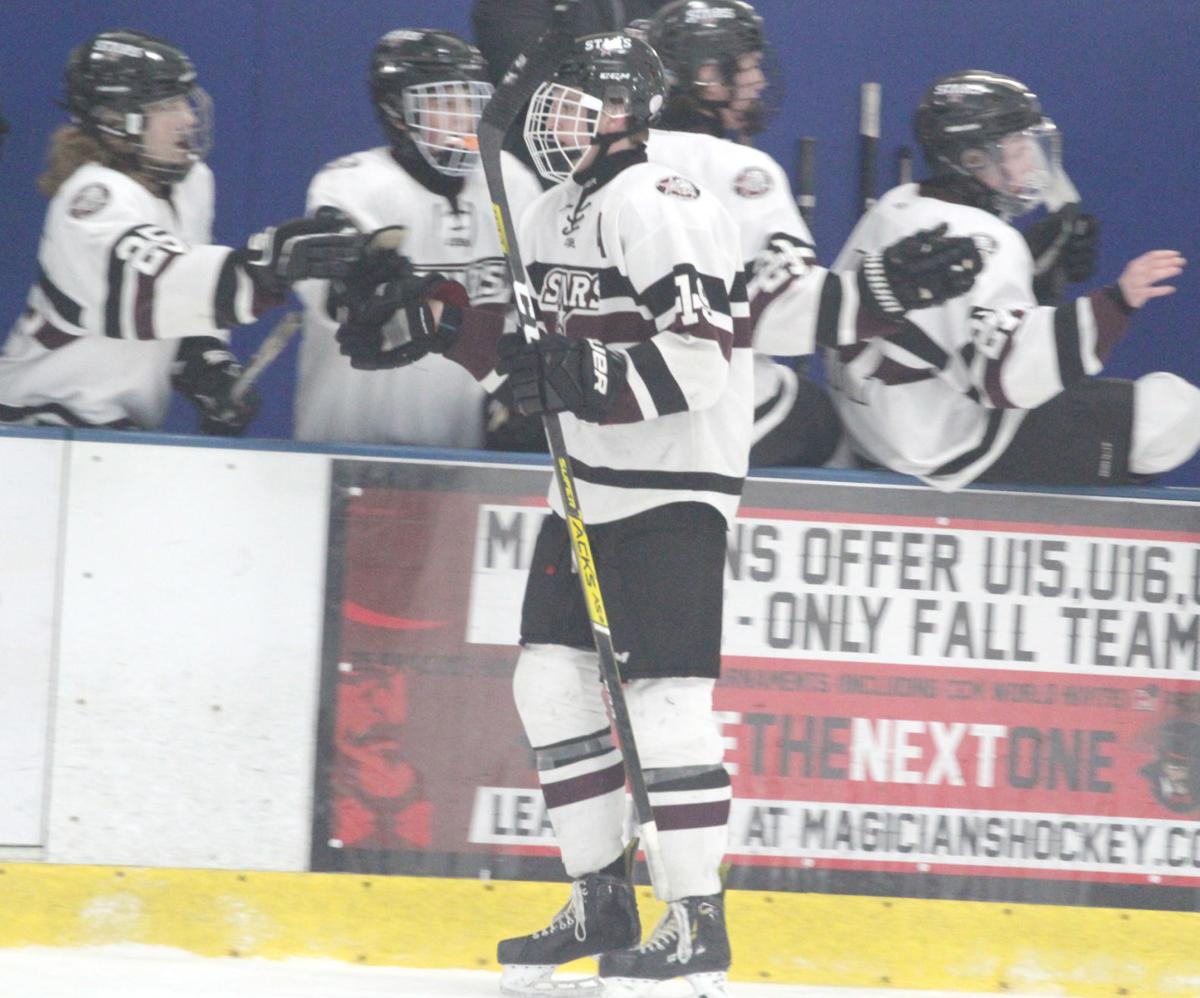 Kit Avery, in his eighth year as head coach of the Southwest Christian boys basketball team, set five standards in humility, passion, unity, servanthood, and thankfulness to guide the path of the program.

Jeremiah Konkel transferred to Southwest Christian after his freshman season, a key contributor to the program in its first three years of varsity hockey with the Richfield co-op.

Brayden Zimmernan gets his hand on top of the ball, forcing a jump ball and possession late in the game in a Southwest Christian win over Le Sueur-Henderson Jan. 16.

When Kit Avery was hired in 2012 to lead the Southwest Christian boys basketball program, wins or losses was never the first priority. It was instilling "an eagerness to wholeheartedly excel in every endeavor, going above and beyond the call of duty."

He envisioned a program where when people came to watch, they could expect to see a hard working team that plays for God, their teammates and their school.

Now in his eighth year, the mission continues at the Chaska high school. That constant self-improvement, as a staff coming together to evaluate how they can continue to grow and adapt while keeping faithful to our mission and vision (the big picture).

"We wanted to always have the mindset of always building and never be finished. Today we build around five points (of a STAR) and they are Humility, Passion, Unity, Servanthood, and Thankfulness," Avery said.

The five points aim to give voice and direction to the rhythms and practices of the program on a daily basis and provide a means through which to connect basketball to Scripture and life. In essence, the SWCHS basketball program affirms that while performing at a high level in the sport is a key facet of what defines success within it, becoming more Christ-like is ultimately of greater importance," he added.

No one expected after a single season of JV hockey that Southwest Christian/Richfield would step on the ice in 2017-18 and turn heads. It was about growth.

Four losses in the first four varsity contests, the Stars won five of the last seven. A 6-2 loss to Dodge County in December, a 3-2 win over the same team in January.

Jeremiah Konkel, who had four goals and six assists in 11 games as a sophomore, led the team with 50 points (16 goals, 34 assists).

"It's a slow process. You try to take steps each year. We definitely have grown as a team the past couple of years. We've had a lot of positive moments and there's great things to come in the future of the program," said Konkel, who grew up in Bloomington, played in the Edina youth program before starting at Minnehaha Academy in Minneapolis as a freshman.

"It was definitely a challenge at first. A lot of the boys didn't know each other. They came from different communities. The chemistry piece definitely took some time. But it's been a great experience thus far," Olimb said, of Wayzata.

Olimb, a junior, is tied for second on the team with nine goals. Konkel is among team leaders in assists with 10.

"We started out slow. Seniors at Southwest Christian go on a mission trip in December, and we were battling illness there. I think the way we've been playing lately, we've figured out our lines, playing with each other, we're a different team now," Konkel said.

One of the greatest challenges any private school program faces is a lack of a true feeder program. While it is afforded the ability to reach out to multiple communities, a smaller team such as Southwest Christian/Richfield has to provide a reason to choose their team over a public school team.

Or yet another private school program.

"We have guys from Wayzata, Edina, Minnetonka, all over the place, coming to Southwest Christian. The nice part are some of us are doing spring stuff, high level summer stuff, tier one, and you get in the locker room and you start to ask around where everyone plays. It's a great way to get some exposure for our program. I really think (Coach Erik Westrum) does a really good job getting out there. He earns a lot of respect. People know who he is and what he believes in," Konkel said.

"Faith is the first thing that comes to mind. I wanted a faith-based school with a great education. I wasn't even planning on playing hockey. I knew they had the JV team before my freshman year. I was more of a soccer guy. But when the opportunity came up to play hockey, I wanted to be a part of it," Olimb said.

"After my Minnehaha Academy year, I just felt like Southwest Christian was going to be a better fit. I had some old grade school classmates come here and loved it. Definitely faith was a big part of it, too. I wanted a program grounded, really solid, and Southwest Christian has been that for me," Konkel said.

And while the Stars remain competitive in conference play, the next step is becoming a section contender. Now a double-A program, Southwest Christian needs to adapt to physically stronger, quicker teams.

"We are always asking ourselves, 'where do we want our program to go?' and then 'how do we get there?" I believe that the entire athletic program at Southwest is truly going after and pursuing excellence. For us as a men's basketball program, that means intentional work in the off-season in skill development and the weight room. Having a vision for what we are building towards and not being afraid to work our tails off to get there. From an athletic program standpoint, it is building and investing in state of the art facilities and also seeking to mentor and disciple our athletes so they can use their sport as an avenue to learn life lessons and become the men and women God desires us to be," Avery said.

With 19 underclassmen in the program, just five seniors in Gustafson, Konkel, Owen Sommerness, Carter Evans, and Caleb Nollenberger, the Stars are taking every step in stride.

"I enjoy going to school everyday. Seeing my buddies, getting a good education. Plus we get to play hockey. To be a part of its start, be a part of the journey, it's been awesome," Konkel said.

Stars over the Scots

A 3-2 game in the third period, breakaway goals from Jackson Olimb and Jeremiah Konkel led Southwest Christian/Richfield to a 5-2 win over St. Paul Highland Park on Jan. 14 in Richfield.

Olimb stole the puck off a turnover, skating in alone for a key short-handed goal at 4:31 of the third period. Konkel got behind the defense for the final score late in the contest.

Ryan Odefey also scored twice, once short-handed, for a 3-0 advantage in the second period. A deflected shot from Cullen O'Connell, who added two assists, was the opening score for the Stars.

Against St. Paul Academy Jan. 16, five goals over the final seven minutes, three with the man advantage, ended up the Stars trailing 5-2 on the scoreboard.

Nic Gustafson netted two goals, one on the power play, as the Stars led 1-0 through two periods.