A rendering of what the Two Twelve Medical Center in Chaska will look like upon completion of a fifth floor expansion in the south building by the end of 2023. The project will add nearly 39,000 square feet to the property. 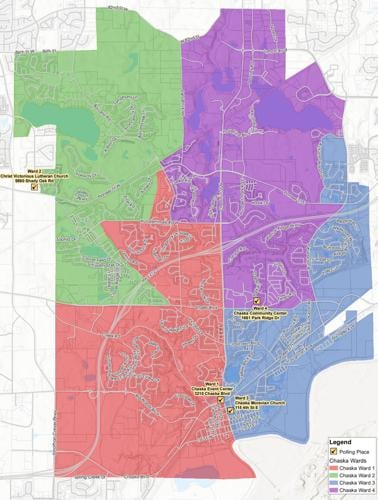 Chaska’s four wards will be redistricted for 2022, a process that happens every 10 years with the federal, state and city census. Two wards will have new polling locations. 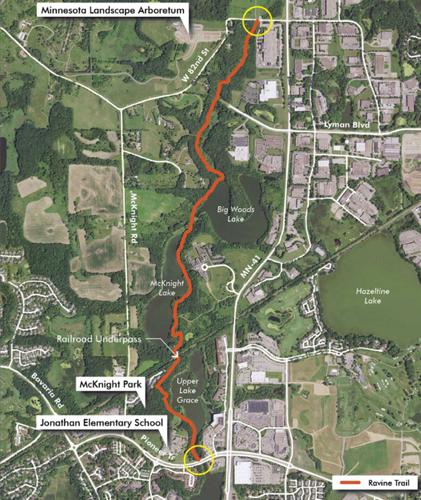 The city of Chaska and Carver County are partnering to apply for state funding for planned improvements on the Northern Ravine Trail between the Minnesota Landscape Arboretum and Pioneer Drive near Jonathan Elementary.

A rendering of what the Two Twelve Medical Center in Chaska will look like upon completion of a fifth floor expansion in the south building by the end of 2023. The project will add nearly 39,000 square feet to the property.

Chaska’s four wards will be redistricted for 2022, a process that happens every 10 years with the federal, state and city census. Two wards will have new polling locations.

The city of Chaska and Carver County are partnering to apply for state funding for planned improvements on the Northern Ravine Trail between the Minnesota Landscape Arboretum and Pioneer Drive near Jonathan Elementary.

The Two Twelve Medical Center is getting a new top floor.

The building, at the southeast corner of Highway 41 and Hundertmark Road, was originally constructed in 2011 as a four-floor medical office building on a 16-acre site, and later expanded with a three-story addition in 2014.

It will now have a fifth floor added to the south portion of the building, after the Chaska City Council approved a final site and building plan at its March 21 meeting.

The addition will add nearly 39,000 square feet to the property, totaling approximately 262,000 square feet upon completion. This renovation and addition will expand clinical and surgical services in the building to support the growing needs of the community, according to Ridgeview Medical Center.

The expansion upward will also come with enhanced facade expression. More glass will be used than in lower floors, while champagne bronze-tone architectural metal panels will be utilized as well.

“Both the glass and the metal panels match the same materials used before on the facade, complementing our generous use of Chaska brick as the predominant exterior material, as well as two additional brick colors (red and gray). Vertical brick ‘tower’ elements will continue up on the facade to anchor key corners and entry features,” the proposal stated.

The addition is expected to be completed by the end of 2023.

This may only be the start of continued growth at the medical center.

If the applicant pursues any of those possibilities, it will be necessary to go through the formal review process again.

A public assessment hearing is set for April 18, 2022. Draft assessments were already presented at a neighborhood information meeting.

“This is one of the last streets to do. We only have a little bit over here (referring to two small sections of Fourth Street and Elm Street south of the Eastern Carver County Schools bus facility) and City Square West, which we're purposely waiting until we do that project so we don't tear it up when we're doing work over there,” said City Administrator Matt Podhradsky. “Things have come a long ways in what, 12 years? 11 years? It's been a long project, almost $30 million spent. I think the downtown, especially after 41 gets done, looks very different than it did before. I think it looks really nice.”

Additionally, Yellow Brick Road could see sanitary sewer and water main improvements, taking out the current well station. This project must be complete by the summer, as the road will be used for a local detour with the Highway 41/County Road 61 construction that will close a portion of the county road.

Come November, polling places for Wards 1 and 3 in the city of Chaska will have new locations. The Chaska Event Center at 3210 Chaska Boulevard will serve Ward 1, while the Chaska Moravian Church at 115 Fourth Street East, which served Ward 1 previously, will now be the polling location for Ward 3.

“First, you try to change as little as possible. The next is making sure we're creating something with as much equal representation as possible, especially for some of those underserved populations of the community,” Podhradsky said.

The process of evaluating wards within the city happens every 10 years following the new census.

Nate Kabat, community development director, said the council utilizes key objectives in the redistricting process, including keeping population sizes within wards as equal as possible and focusing on larger deviations on areas where growth is expected.

The objective is to keep a four-ward system, while having downtown, the Jonathan and mobile home park neighborhoods represented in multiple wards.

Kabat said among the larger changes are the Brooks Ridge neighborhood moving from Ward 2 to 1, while the boundary split between Wards 1 and 3 has shifted from Walnut Street to Highway 41.

Podhradsky said homes that were moved into new wards, or those with new polling locations, will receive notification in the mail of these changes.

In January, the City Council made a motion to use $1.6 dollars of the funds for the prepayment of the new fire ladder truck. Final guidance on the use of SLFRF money placed further restrictions on the purchase of equipment, leaving city staff to change its recommendation.

Mayor Mark Windschitl was authorized to send a letter of support for state funding for the Northern Ravine Trail, a collaboration between the city of Chaska and Carver County to improve a 2.4-mile off-street trail for pedestrians and cyclists. The trail connects West 82nd Street near the Minnesota Landscape Arboretum and Pioneer Trail near Jonathan Elementary School.

The project is consistent with the Chaska’s goal of having a paved trail connecting the Minnesota Valley National Wildlife Refuge at the city’s south edge to the University of Minnesota’s Landscape Arboretum on its northern edge, said Kevin Ringwald, director of special projects for the city of Chaska.

Currently, the trail consists of a mixture of paved and unpaved segments. Additionally, the portion of trail that intersects with the Twin Cities and Western Railroad causes people “to make unsafe choices,” said Ringwald.