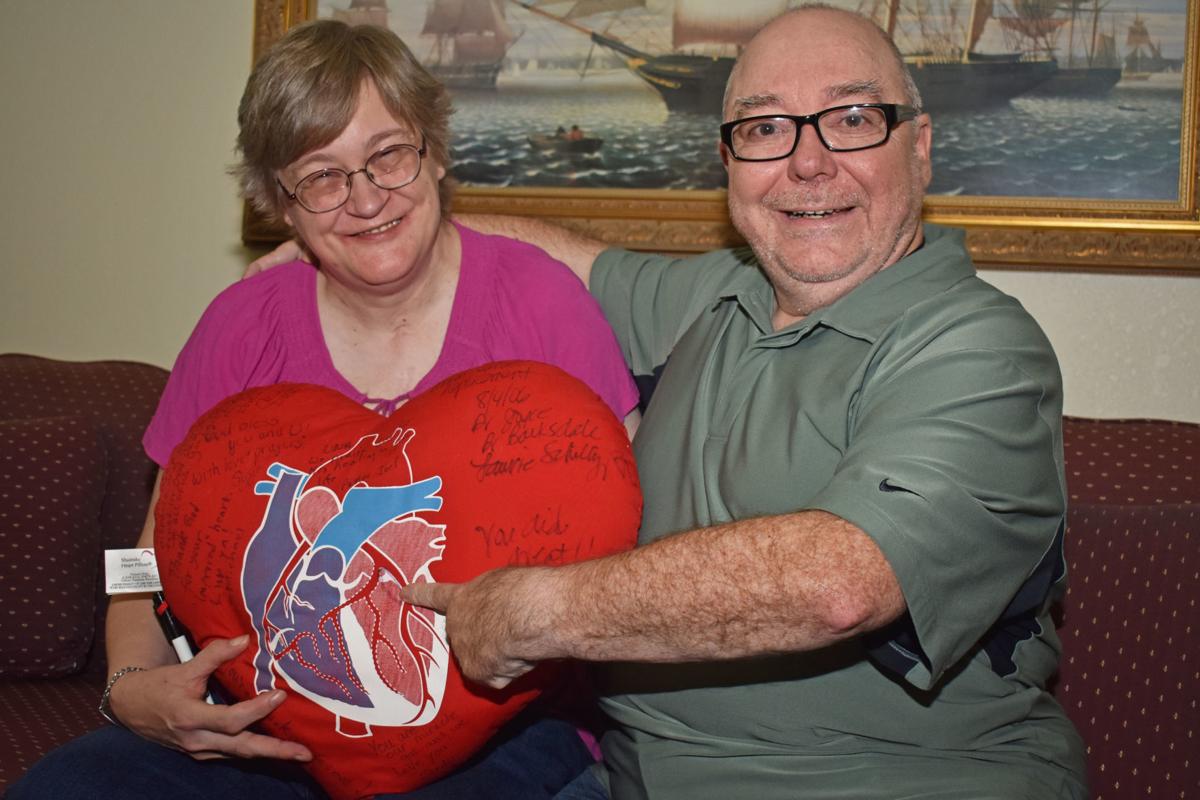 Left —After Una Ireland’s surgery, she received a pillow in the shape of a heart. Family and friends from Westwood Community Church signed the pillow. 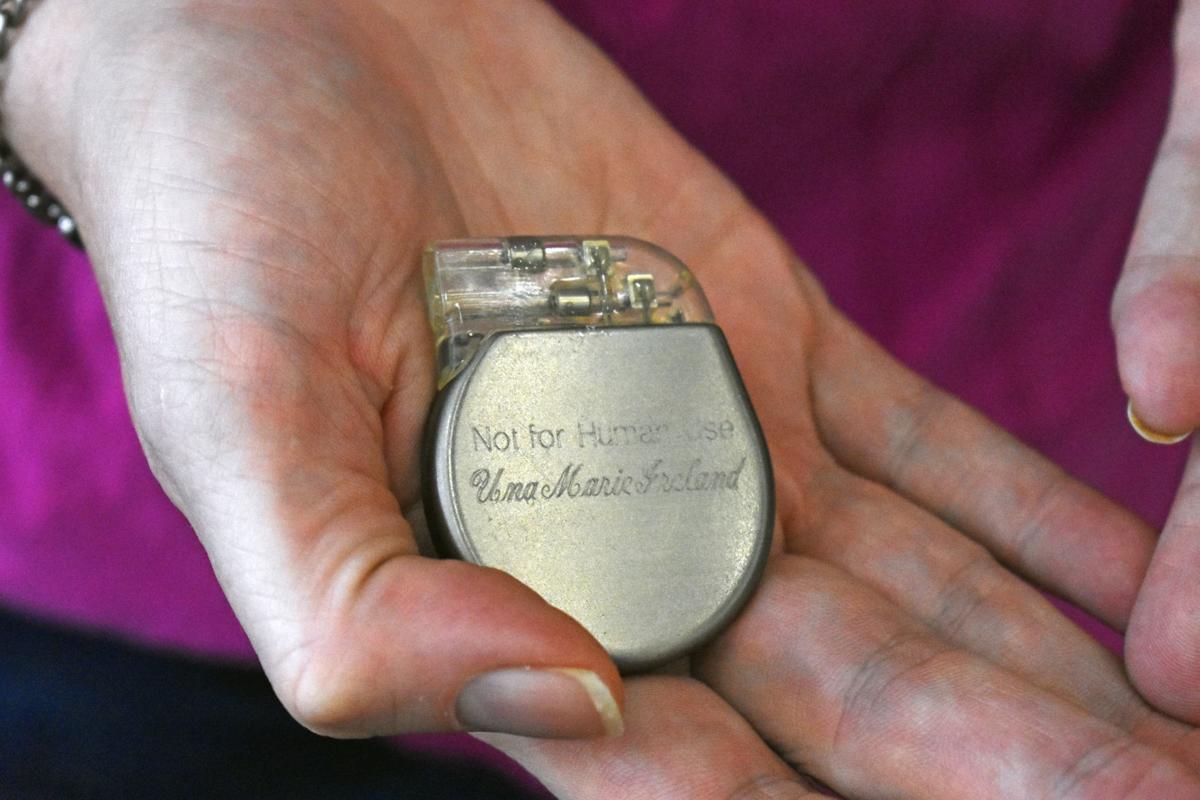 Inset — After a pacemaker was removed from Una Ireland, the device was engraved with her name. 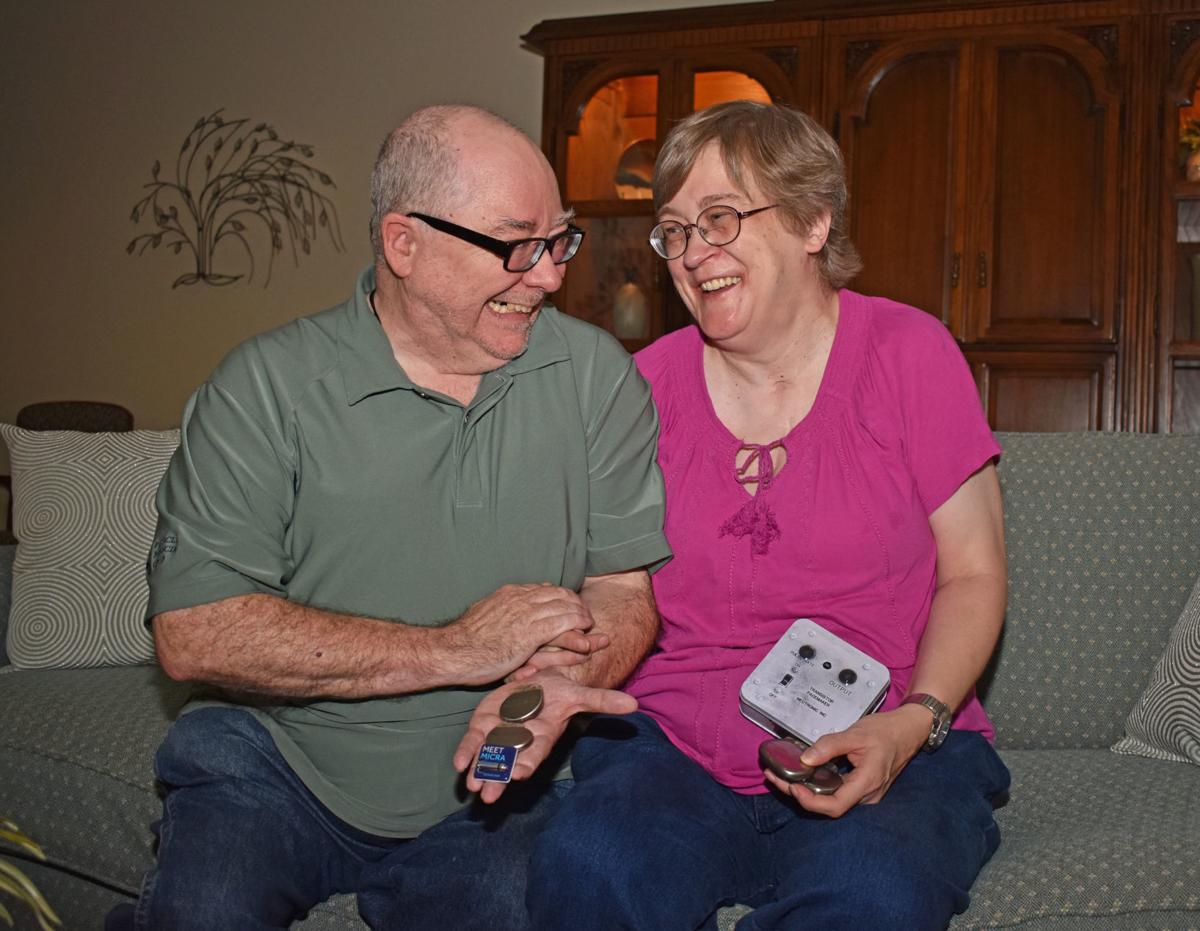 Michael Ireland has stayed by his wife’s, Una Ireland, side since they met at Crown College in St. Paul. 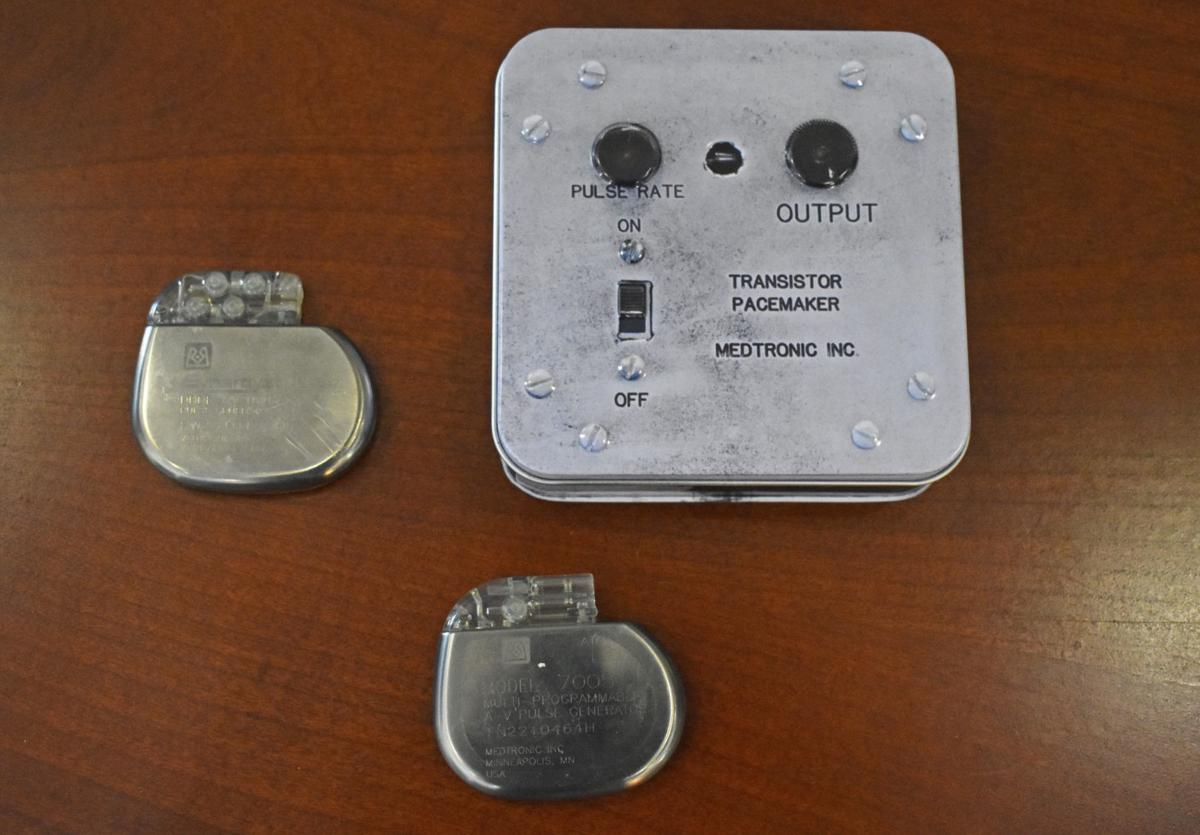 Some of the pacemakers that have kept Una Ireland alive over the years.

Left —After Una Ireland’s surgery, she received a pillow in the shape of a heart. Family and friends from Westwood Community Church signed the pillow.

Inset — After a pacemaker was removed from Una Ireland, the device was engraved with her name.

Michael Ireland has stayed by his wife’s, Una Ireland, side since they met at Crown College in St. Paul.

Some of the pacemakers that have kept Una Ireland alive over the years.

Sit silently near Una Ireland and you may hear a clicking sound coming from her chest.

For most of Una’s life, a small medical device in her heart has helped her survive. Born just years after the first pacemaker was invented, Una had her first surgery for the device that regulates her heartbeat in 1968 at the age 7.

Pacemakers have helped Una through life — her attendance at Crown College in St. Bonifacius, her marriage, two pregnancies and raising her two daughters in the Jonathan neighborhood of Chaska. Along the way, she had many surgeries including open heart surgery in 2006 to replace a valve. The replacement makes the soft clicking noise in her heart.

And God was there with her from the beginning, helping her stay positive, despite her many health concerns, Una said.

“I think she has a positive mental attitude. She’s my sunshine and doesn’t let this get her down,” said her husband Michael Ireland, 63, in a Chanhassen apartment where they now live. “My wife handles this very graciously.”

In August, the 57-year-old received her 15th pacemaker, which now doubles as a defibrillator. The surgery was performed without any major complications and now, after 50 years of living with a pacemaker, Una hopes her story will help others in similar situations.

She grew up in the small town of Stephen, located in northern Minnesota and 90 minutes from Winnipeg, Canada.

For years, doctors hoped her heart would heal on its own.

It never did, and when she was 7, Una had surgery for a pacemaker. It was one of the first versions of the device and could only regulate her heart rate at a normal speed, so her parents advised her to not physically strain her body, as her heart rate would not be able to keep up.

The doctor also advised her to avoid bumping into anything, and in class, teachers kept a close eye on her.

Early on, Una’s pacemaker would malfunction about three to five times a year and she’d feel dizzy and like she was about to collapse. On one occasion, she felt lightheaded and her parents knew they had to take her to a hospital at the University of Minnesota in the Twin Cities right away.

“My dad was driving 70 or 80 mph all the way down to the cities, long before Minnesota raised its 65 mph highway speed limit. My parents told me to lie down in the back of the car — I was scared, I didn’t know what was happening,” Una wrote on an online support group called Wired4Life. “I was only 10 years old at the time. I’m surprised that we weren’t stopped for speeding. We did make it to the hospital, found out the pacemaker had malfunctioned and it was changed.”

Despite her health issues, Una remained positive throughout her childhood.

“I think from a young age, I knew Jesus was taking care of me,” she said.

The Bible verse Psalms 73:26 kept her going: “My flesh and my heart may fail, but God is the strength of my heart and my portion forever.”

“I took that as my verse that he’s taking care of me and my heart and I don’t need to fear anything,” Una said.

It was at Saint Paul Bible College (now Crown College) where she met the love of her life and now husband, Michael. He had moved from a suburb of London to Minnesota to study ministry and journalism at the college.

“I told myself I’d never date anyone with a medical problem,” he said. Nevertheless, he fell for Una, who had blond hair and blue eyes framed with big round glasses.

Impressing her was tough, as she thought he was snobby.

“We started courting after he invited me to a nearby Pentecostal church,” Una wrote in Wired4Life. “Soon our friendship blossomed and it wasn’t long before we realized that we really cared for each other, and we became inseparable.”

In 1984 after just months of dating, Una was scheduled for surgery.

Michael became so nervous for Una and his attachment to her, he tried to end their relationship.

“I thought what if she dies; I got to break up with her,” Michael said, adding that as a young adult he was afraid of caring too much for Una. But his future wife calmed him down and soon he was sitting next to her bedside before she went into surgery.

“I was nervous for her and I told her ‘I love you and I’ll see you on the other side,’” he said.

Over the years, Michael learned how to be prepared in the event Una has a health emergency. He also learned to lean on his faith to cope with her ongoing health issues. He also created a network of friends and family to call and during Una’s surgeries, he brings a friend for emotional support.

“You have to trust the system and you have to believe this is going to work out,” Michael said.

While living in Chaska with their two daughters, Una had a sudden episode of cardiac arrest in November 2004.

“Una had flat-lined and she had no pulse and wasn’t breathing,” Michael recounted. Michael called 911 and began giving Una heart compressions.

“I’m so thankful that they got to our house so quickly and were able to revive her and get her to medical treatment,” Michael said.

Una was transferred to St. Francis Regional Medical Center, where she was placed into a medically induced coma from Nov. 22 to Dec. 23.

For nearly a month, Michael was a single dad, attending to his two daughters and worried about his wife in the hospital.

Meanwhile, Una was sleeping, hearing conversations, hymns and prayers said by her bedside. Friends from their church, Ridgewood Church in Minnetonka, visited her in the hospital, alongside their family.

Una remembered hearing a little boy and his mother, who told her family they would pray for her. The boy went up to her bedside and Una heard him say, “I miss you and my sister does too.”

The boy had told his mom he thought Una would regain her health. Later, when Una recovered and started attending church again, the boy was ecstatic.

“See mom, I told you she got better,’ he said to his mom,” recalled Una.

Michael believes Una was born at the right time and in the right state.

Earl Bakken, who passed away Oct. 21, invented the first battery powered pacemaker in 1957 and Medtronic, headquartered in Minneapolis, began producing implantable pacemakers just one year before Una was born.

Newer pacemaker models can change the patient’s heart rate in accordance to their fitness levels, Una said, noting that doctors now recommend recipients get lots of exercise. They are also a lot smaller compared to her first one, which was as large as a cigarette box and had mercury batteries.

“I think it is amazing Una has lived all this time with the help of a battery,” Michael said.

For others in similar situations, Michael and Una Ireland recommend:

“My flesh and my heart may fail, but God is the strength of my heart and my portion forever.”