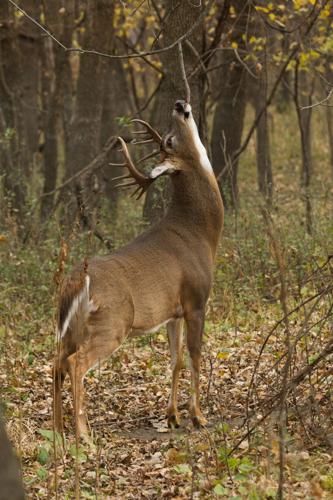 At this time of year, stalking through the forest with my camera in hand in search of White-tailed Deer (Odocoileus virginianus) is one of my favorite activities. The crunching of leaves under my boots, the crisp cold air and the smell of the decomposing leaves are all part of the autumn white-tailed experience.

The White-tailed Deer, also known as just white-tails or Virginia Deer, are one of the most successful animals to roam the Americas. Found across most of the states and much of Canada and southern Yukon, they are also found in Mexico, Central and South America. There are just a few southwestern states that don’t have a healthy population of White-tailed Deer; otherwise, the rest of us see plenty of deer. They are a habitat generalist, occupying a wide range of habitats—from mixed deciduous forests to the foothills of the Rocky Mountains, deserts, river valleys, wetlands, suburbs and small and big cities.

The other day while walking through the woods in search of a rutting buck, I was fortunate enough to come across a fairly decent 11-point buck. He was clearly rutting and had other things on his mind. The rut is a term used to describe the time in late October and early November when the females enter estrus and are receptive to breeding. The declining photo period, or the amount of sunlight from sunrise to sunset, is what triggers the maturation of the females. The females, called does, may be as young as six months, but usually more like 18 months old, when they first breed.

I started following the rutting buck. It was clear and obvious he was just following his nose. In other words, he was sniffing the ground and the air and letting his nose take him to the female deer in the area. This meant that I had to keep up a good pace through the woods to keep up with the buck. Occasionally, he would stop and look around. These were the times that I could catch up and try to get out in front of him to capture some images of something other than his butt as he was in pursuit of the females.

One of the most remarkable aspects of the rut are the very odiferous scents that the bucks produce. A buck has four sets of major glands located around his body. Each of these glands produce a pungent and powerful scent. So, when the buck is rutting, he gives off a strong odor that I can easily smell at up to 50 yards if the wind is right.

Bucks produce a scrape or scent post, on the ground, to advertise his presents to the female deer. He uses his front hooves to scrape the ground clean of leaves and branches, exposing the soil. While doing this, glands between the toes, called the interdigital glands, emit a yellow waxy substance with a strong odor. At the same time the buck will urinate onto the freshly exposed ground. While urinating, some of the urine will run down its hind legs and over the tarsal glands, picking up more scent to be deposited on the ground.

Most scrapes have a low hanging branch, sometimes called the licking stick, directly above the scrape where the buck arches his back and reaches up to rub his forehead on the stick. He has more scent glands between the antlers and near the eyes which he rubs on the licking stick. These are the sudoriferous glands, which also produce a strong scent.

While out stalking the woods, I found six very fresh scrapes. As always, I get down on the ground and smell the exposed dirt. Experiencing these olfactory events helps to complete the understanding of the White-tailed Deer rutting experience.

Female white-tails will visit these scrapes. I’ve watched as does will stop and take several minutes to smell around the scrape site. It’s believed that the male’s scent post will help push the female into estrus or make her more receptive to the particular buck when he comes calling.

Bucks will also use their antlers to make a rub. A rub is when he chooses a small tree and uses his antlers to rub and scrape the bark from the trunk. I’ve watched and filmed this process many times and they usually tear up the tree. During this process they also deposit scent from the scent glands between their antlers. This acts as a visual and olfactory scent post to let the does in the area know he is around and ready to breed.

I will no doubt be out many more times this season to stalk the autumn woods in search of the elusive White-tailed Deer. Until next time…