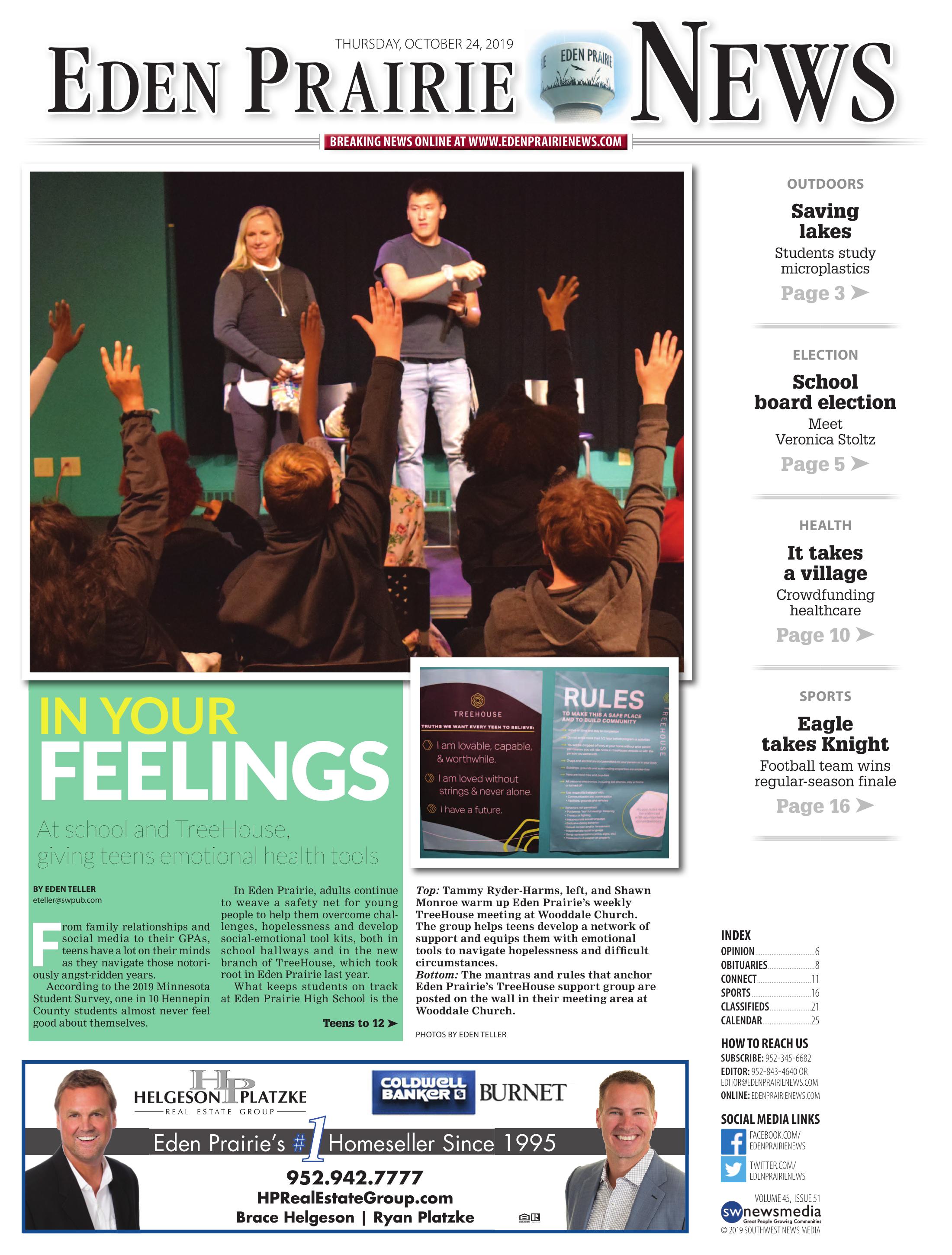 Bottom: The mantras and rules that anchor Eden Prairie’s TreeHouse support group are posted on the wall in their meeting area at Wooddale Church.

The mantras and rules that anchor Eden Prairie’s Treehouse support group are posted on the wall in their meeting area at Wooddale Church.

From family relationships and social media to their GPAs, teens have a lot on their minds as they navigate those notoriously angst-ridden years.

According to the 2019 Minnesota Student Survey, one in 10 Hennepin County students almost never feel good about themselves.

In Eden Prairie, adults continue to weave a safety net for young people to help them overcome challenges, hopelessness and develop social-emotional tool kits, both in school hallways and in the new branch of TreeHouse, which took root in Eden Prairie last year.

What keeps students on track at Eden Prairie High School is the school’s multi-tiered support system, or MTSS, according to Associate Principal Molly Hollenbeck. It’s a network of school psychologists, social workers, counselors, nurses, administrators, and deans working together with teachers, families, instructional coaches, and outside partner agencies like TreeHouse to support students dealing with challenges, academic, emotional, health or otherwise.

“That requires us to know each student and their story,” Hollenbeck said. “We know more about them than just what we do during the school day.”

MTSS teams meet weekly to review academic, attendance and behavioral data that may indicate when a student needs support, Hollenbeck explained. A student’s sudden dip in attendance often indicates a deeper issue than just cutting class, she said: Might this student be avoiding something? Has his way of getting to school changed?

“On the surface it looks like attendance, but that’s not the core source of his academic struggles,” she added.

According to the 2019 Minnesota Student Survey, 43% of Hennepin County 9th and 11th graders feel that adults at their school care about them quite a bit or very much. Hollenbeck cited an EPHS survey conducted last year which found “83% of respondents said that an adult at EPHS has made efforts to get to know me as a person. And 91% of respondents said they believe that their success is important to adults at school,” she wrote in an email to Eden Prairie News. In Eden Prairie Schools, 93% of students believe teachers care about them, compared to 86% statewide, according to Minnesota’s Department of Education school report card.

“We never give up, and the child sees us never giving up,” Hollenbeck said.

At Central Middle School, four counselors, a social worker and a school psychologist are on staff to help students deal with stress, and support groups meet regularly to discuss grief and loss, coping with worry and family change like divorce, said CMS Associate Principal Richard Larson. Neither Larson nor Hollenbeck were able to provide numbers for how many students their respective programs helped; it’s “not quantifiable,” Hollenbeck said, because MTSS affects the entire culture of the school.

With TreeHouse starting up in Eden Prairie, “we have students in common now,” Hollenbeck said. EPHS refers students to outside partner agencies “with precision,” she added, keeping in mind which programs may be right for a certain student’s needs.

TreeHouse is an organization with the goal to end hopelessness in teens age 12-18, said Area Director Tammy Ryder-Harms. While that may overlap with teens who experience anxiety and depression, she emphasized that TreeHouse is for all young people, not only those dealing with mental health concerns.

A Minnesota teacher started TreeHouse 1979 and it’s since expanded to seven states with 32 branches and seven opening soon, according to its website. The local chapter, which opened in January 2019, received $30,000 from the Eden Prairie Community Foundation last April, according to a foundation news release.

Eden Prairie’s chapter has around 40 core teens who attend its support group and activities, Ryder-Harms told Eden Prairie News. TreeHouse is a Christian faith-based organization but is open to all regardless of religious identity, the website says.

On Oct. 15, around 18 young people settled into a common space after arriving or being dropped off by TreeHouse’s free shuttle service, which picks up teens in the Eden Prairie School District and brings them to the group.

After a meal and a few announcements from Ryder-Harms, one member took to the low stage to share her story, as teens can do if they so choose. Speaking comfortably in front of the small audience, she described coping with a separation from a family member and difficulty making friends, as well as her experiences with depression and self-harm and the creative channels she began to use to express her feelings instead of self-harm. Three or four hands rose in the audience when, after she finished, Ryder-Harms asked who related to the young woman’s story.

The smaller support circles, led by a handful of adult volunteers, formed after the story and a quick game involving shoving multiple marshmallows into one’s mouth and trying to say “chubby bunny.”

As they went around the circle, each one opted to share the events that had caused those feelings: Anticipating receiving a new phone; balancing academic success with pursuing creative passions; navigating romantic pitfalls; coping with self-image in the face of others’ beauty standards; and conflict with parents. Others chimed in to affirm feelings, offer support or share comparable experiences.

“Automatically, the pain lessens when you realize you’re not alone,” Ryder-Harms said.

A core aspect of TreeHouse is teaching young people to identify their feelings, said Angela Shultis, TreeHouse’s vice president of outreach. While the roots of their challenges may vary — from a temporary disruption to a more systemic issue — knowing how to manage their feelings having a safe place to share is invaluable, she said.

“The pressures (on teens), I think, have increased,” Shultis said. “They are learning and forming their sense of identity, more and more separate from their families.”

Both EPHS and TreeHouse have a trio of important statements or questions that guide their support systems. For TreeHouse, the statements “I am lovable, capable and worthwhile,” “I am loved without strings and never alone,” and “I have a future” that they impress upon their group members. At EPHS, Hollenbeck said, they’re guided by the questions, “Do I belong here? Is this meaningful? Can I do this?”

According to the 2019 Minnesota Student Survey,

It takes a village