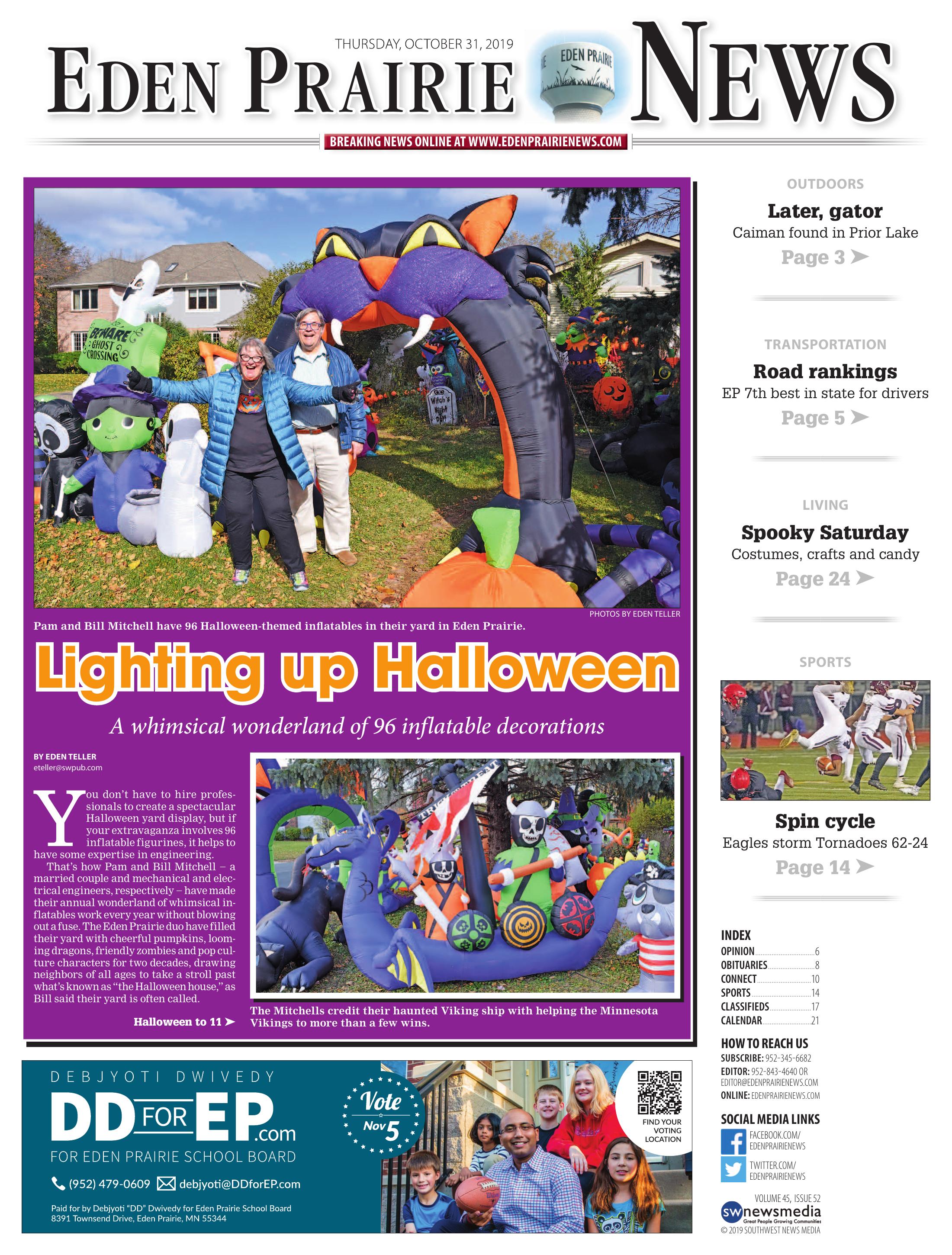 Pam and Bill Mitchell have 96 Halloween-themed inflatables in their yard in Eden Prairie.

A massive pair of eyes peers out of the shrubbery at Bill and Pam Mitchell’s Halloween house.

Mikayla Capouch, 18, poses with a witch at the Mitchells’ home. She grew up visiting the neighborhood “Halloween house” and took a walk down memory lane while home on fall break from the University of Nebraska amother.

A witch peeks out of Pam Mitchell’s garden. She trims back any plants to make sure visiting trick-or-treaters can walk along the paths without running into prickly seeds.

The Mitchells spend days setting up 96 inflatable Halloween decorations and enjoy the community it brings together in their yard, they said.

Characters from movies, like Mike and Sully of Pixar’s “Monsters University,” are popular with the young trick-or-treating crowd, Pam Mitchell said.

You don’t have to hire professionals to create a spectacular Halloween yard display, but if your extravaganza involves 96 inflatable figurines, it helps to have some expertise in engineering.

That’s how Pam and Bill Mitchell − a married couple and mechanical and electrical engineers, respectively − have made their annual wonderland of whimsical inflatables work every year without blowing out a fuse. The Eden Prairie duo have filled their yard with cheerful pumpkins, looming dragons, friendly zombies and pop culture characters for two decades, drawing neighbors of all ages to take a stroll past what’s known as “the Halloween house,” as Bill said their yard is often called.

The inflatables are whimsical and bright and line the walkways in the Mitchells’ yard, which they asked a landscaper to put in so children could explore the display without tripping over plants or tethers. Anything that might frighten a trick-or-treater − a looming Frankenstein’s monster, creepy eyeballs − is relegated to the side yard and blocked from view by a 6-foot-tall Scooby-Doo wearing a witch’s hat. In the day or two before Oct. 31, they put out a relic from their first year of marriage: a battery-powered screaming doormat.

Pam and Bill buy their inflatables from a variety of places − Menard’s, Lowe’s, the internet − and look for designs that will delight more than frighten, Pam said. The yard decorations are partly a way of remembering and honoring her mother, who died many years ago and whose wake was held on Halloween. Passing out small toys instead of candy and bringing smiles and laughter into the world is something her people-loving mother would have appreciated, Pam said.

“Instead of remembering it sadly, it’s remembering the joy of the next generation,” she reflected.

They’ve learned many lessons over the years, including how easily mulch can get sucked into a whirring fan and that rabbits love to chew on the electrical wiring. And nearly 100 inflatables − even with low-power LED lighting − requires some electric finagling, which is where Bill’s know-how comes in handy. When the yard is fully inflated, it consumes the same amount of energy as an electric range stove going full blast, Bill said. To prevent blowing a fuse (or four), he made an extensive spreadsheet to track how much electricity each inflatable needs and organize which ones can go on the same circuit.

“I know the electrical code, so I know everything that needs to be done to make sure it’s safe,” he added. “She tells me ‘I need power here,’ so I get her power.” 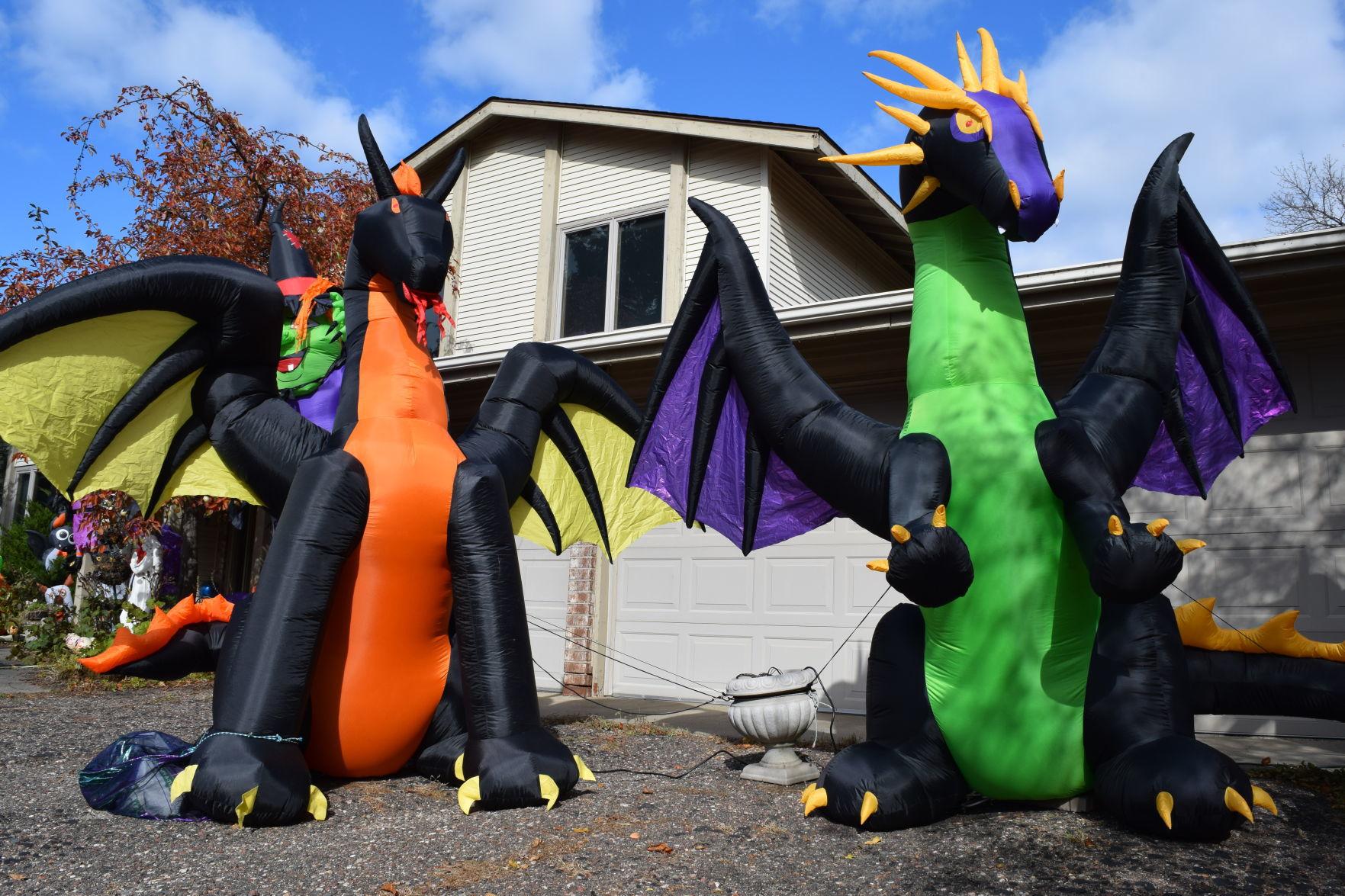 It takes several days to install the yard every year, even when working together, and Pam spent some time recovering from an illness this October so the yard took a bit longer to go up this year, the couple said. Bill took a full day off work to construct the yard earlier this month and finished just as a school bus unloaded a gaggle of children a few doors down from the yard.

“The joy of the universe just grew exponentially when the kids saw,” Pam said. “We’ve had kids grow up, they come and check it out every year.” 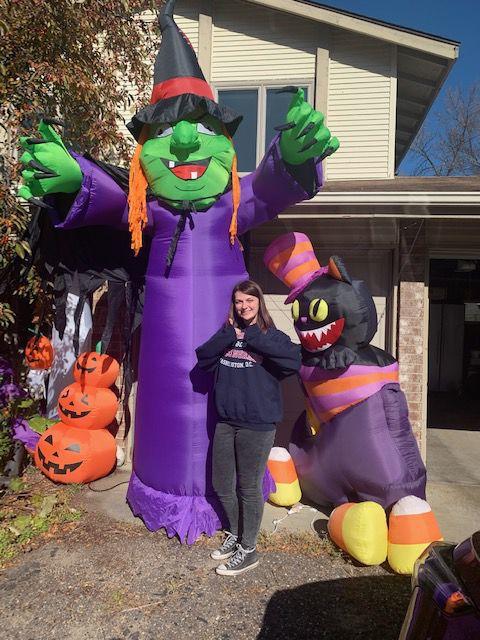 Mikayla Capouch, 18, poses with a witch at the Mitchells’ home. She grew up visiting the neighborhood “Halloween house” and took a walk down memory lane while home on fall break from the University of Nebraska amother.

Robin Capouch lives a few doors down from the Mitchells and took a walk down the street − and down memory lane − with her 18-year-old daughter. Mikayla, who was visiting home during her freshman year at the University of Nebraska in Lincoln. While they’re well-known for being the Halloween house, she told Eden Prairie News, the Mitchells are wonderful neighbors for the rest of the year as well. 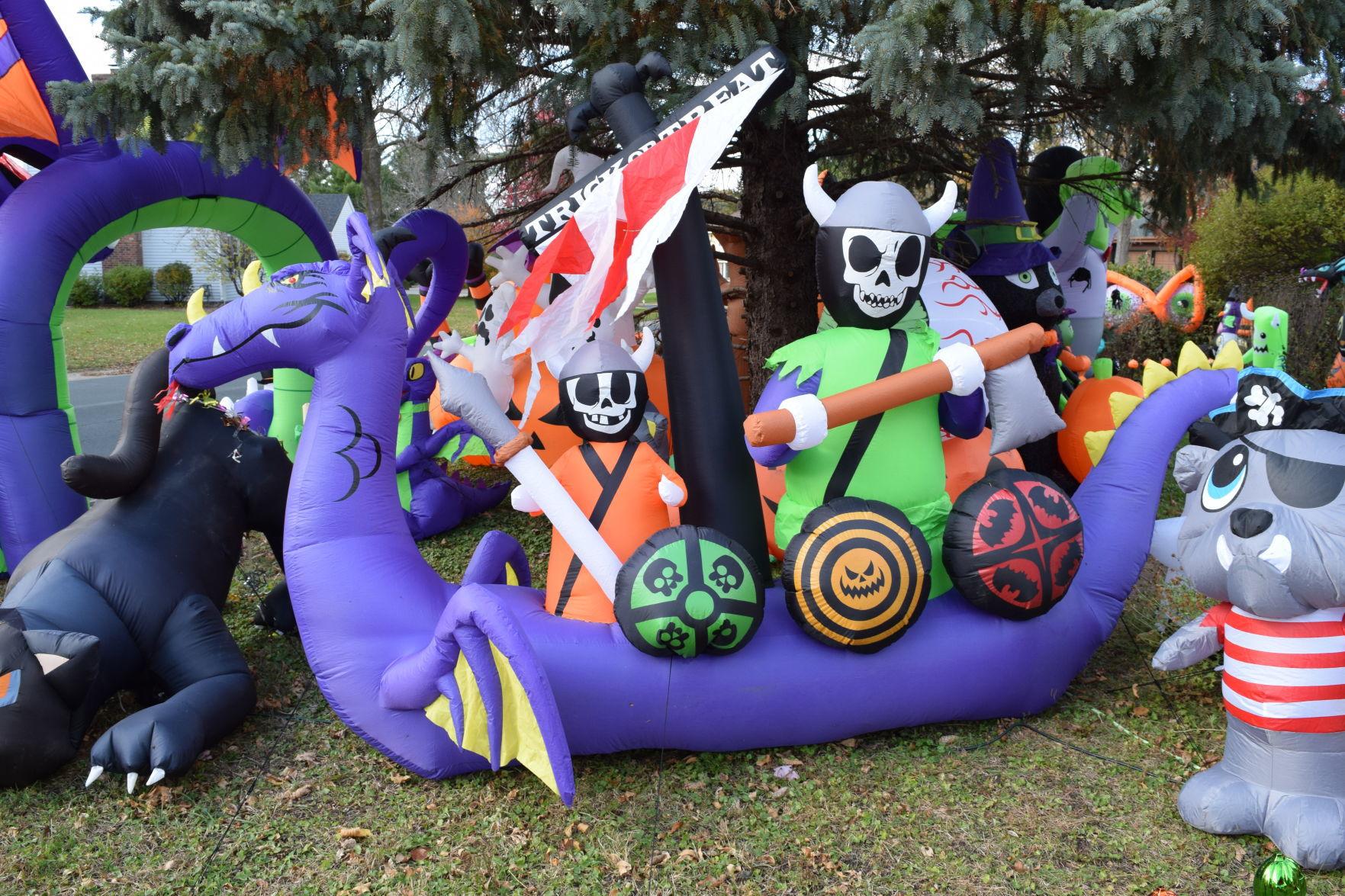 The Mitchells credit their haunted Viking ship with helping the Minnesota Vikings to more than a few wins.

Superstition has crept into the display in another way: They credit a jaunty Viking ship, which they’ve had for four years, as a good luck charm for the Minnesota Vikings.

“It started to help the Viking do better, until it didn’t. They have their part to do too,” Pam said.

“Obviously it’ll be up tonight,” Bill added. (It was the afternoon of Oct. 24; that evening, the Vikings played the Washington Redskins and won 19-9.)

The Mitchells’ display is short-lived; because damp and cold weather makes it harder for inflatables to run properly, they take down their masterpieces the day after Halloween. 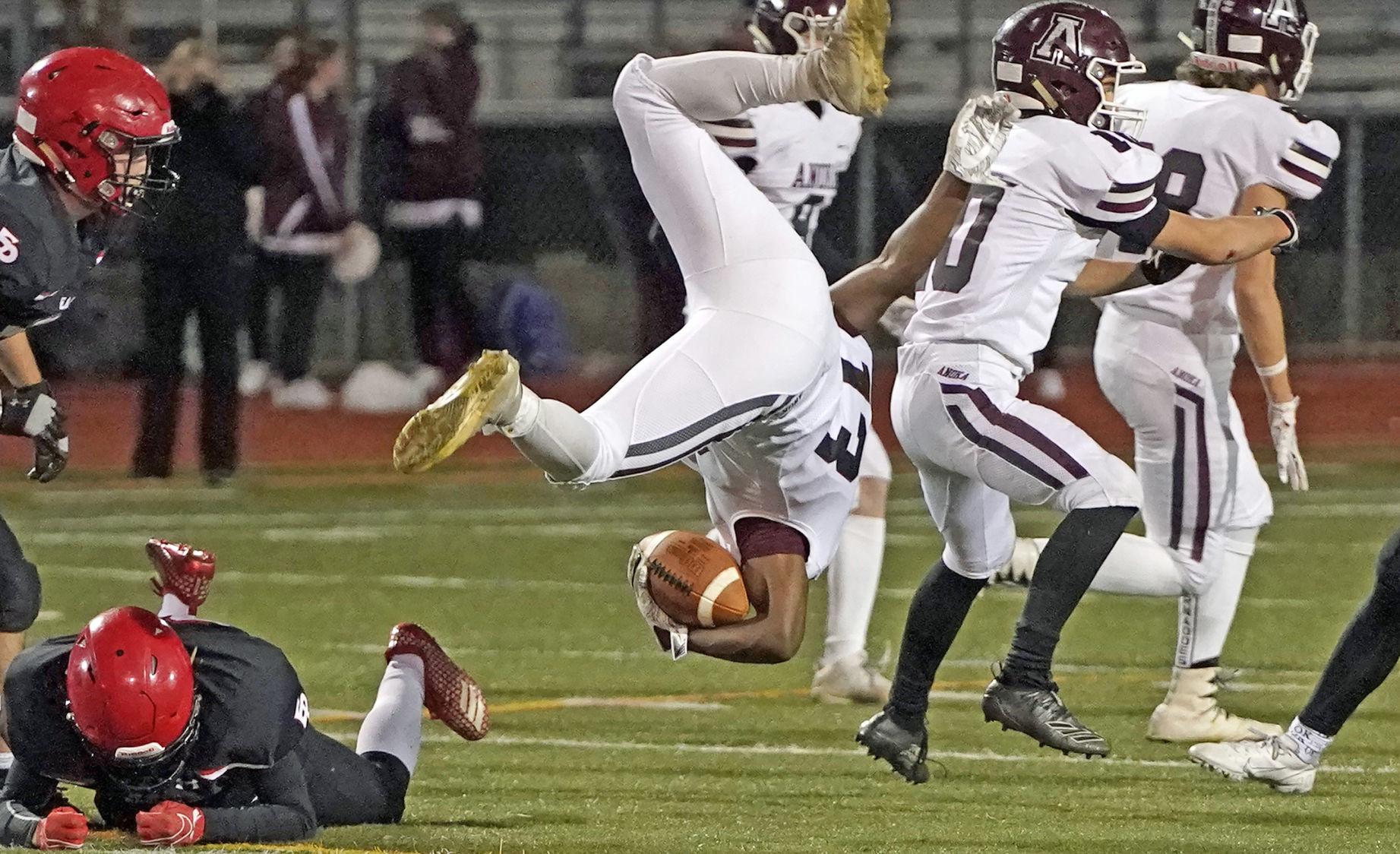