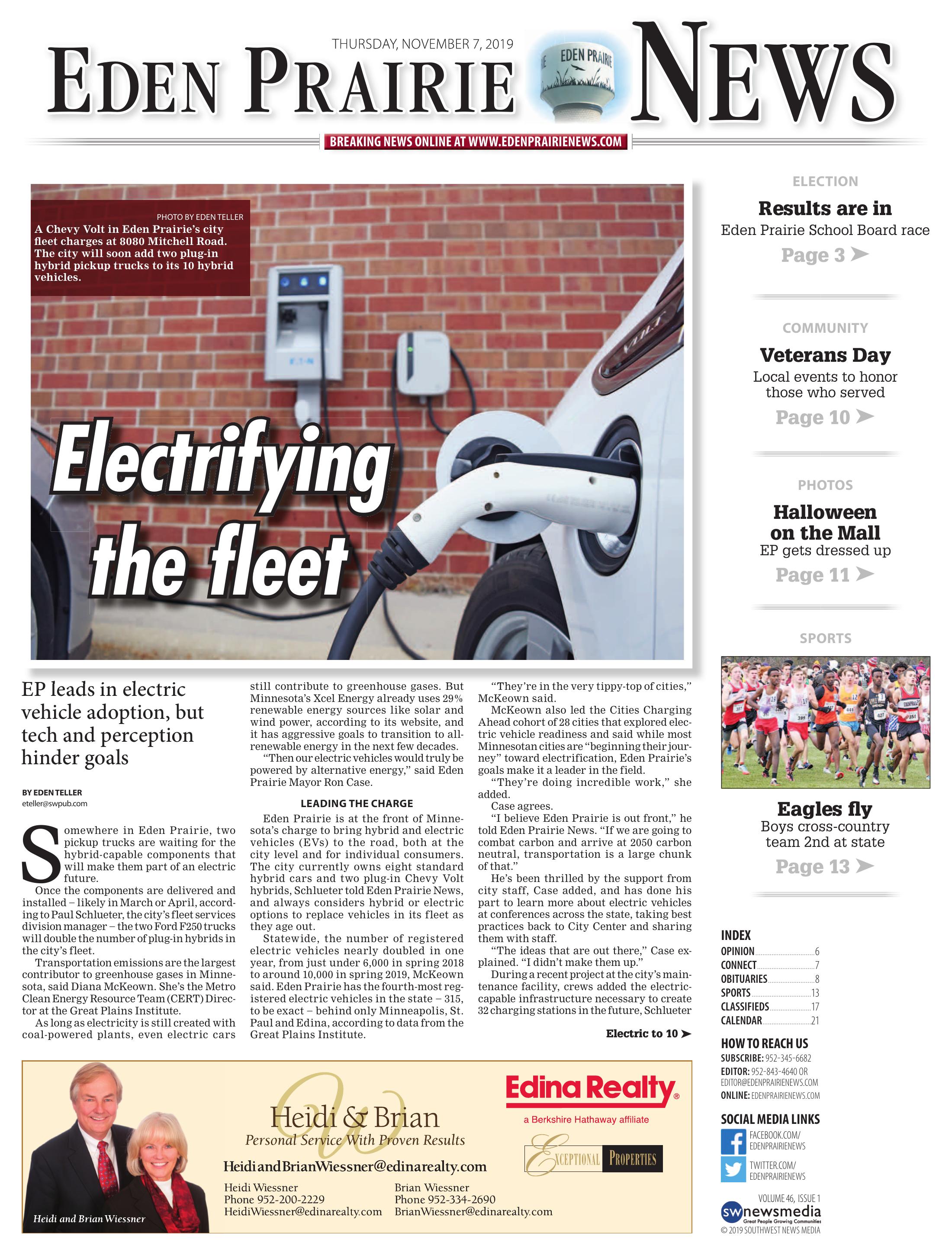 A Chevy Volt, part of Eden Prairie’s city fleet, is parked at a charging station at the police station at 8080 Mitchell Road.

Somewhere in Eden Prairie, two pickup trucks are waiting for the hybrid-capable components that will make them part of an electric future.

Once the components are delivered and installed − likely in March or April, according to Paul Schlueter, the city’s fleet services division manager − the two Ford F250 trucks will double the number of plug-in hybrids in the city’s fleet.

As long as electricity is still created with coal-powered plants, even electric cars still contribute to greenhouse gases. But Minnesota’s Xcel Energy already uses 29% renewable energy sources like solar and wind power, according to its website, and it has aggressive goals to transition to all-renewable energy in the next few decades.

Eden Prairie is at the front of Minnesota’s charge to bring hybrid and electric vehicles (EVs) to the road, both at the city level and for individual consumers. The city currently owns eight standard hybrid cars and two plug-in Chevy Volt hybrids, Schlueter told Eden Prairie News, and always considers hybrid or electric options to replace vehicles in its fleet as they age out.

Statewide, the number of registered electric vehicles nearly doubled in one year, from just under 6,000 in spring 2018 to around 10,000 in spring 2019, McKeown said. Eden Prairie has the fourth-most registered electric vehicles in the state − 315, to be exact − behind only Minneapolis, St. Paul and Edina, according to data from the Great Plains Institute.

“They’re in the very tippy-top of cities,” McKeown said.

McKeown also led the Cities Charging Ahead cohort of 28 cities that explored electric vehicle readiness and said while most Minnesotan cities are “beginning their journey” toward electrification, Eden Prairie’s goals make it a leader in the field.

“I believe Eden Prairie is out front,” he told Eden Prairie News. “If we are going to combat carbon and arrive at 2050 carbon neutral, transportation is a large chunk of that.”

He’s been thrilled by the support from city staff, Case added, and has done his part to learn more about electric vehicles at conferences across the state, taking best practices back to City Center and sharing them with staff.

“The ideas that are out there,” Case explained. “I didn’t make them up.”

During a recent project at the city’s maintenance facility, crews added the electric-capable infrastructure necessary to create 32 charging stations in the future, Schlueter said, which is cheaper than doing it in a separate project. There are already two city-only charging docks for the fleet’s Chevy Volts at City Center, 8080 Mitchell Road, Schlueter said, and there are four public charging docks in the city: two at City Center and two at the Community Center, 16700 Valley View Road.

“We’re certainly preparing for the future,” he observed.

As a mayoral candidate, Case set a goal to have an all-electric fleet by 2030. That goal was tempered when as mayor, he and city staff began to explore the available technology and it became clear that the battery technology for electrifying vehicles like police cars and dump trucks isn’t available yet.

“Everything you research in the industry indicates that’s a bit of a stretch,” Schlueter said of the 2030 goal. “A lot of it is still in the infancy stage. There’s a lot of hype.”

Minnesota’s temperatures are one of the highest hurdles for electric vehicle developers. Batteries, like people, operate best in a narrow range of temperatures, with peak efficiency between 20 degrees above and below room temperature, Northrop said.

Another challenge is heating the car. An electric vehicle’s efficiency is a double-edged sword, Northrop explained. While combustion engines are only 30% fuel efficient, the excess heat they produce warms the car’s cabin. Electric vehicles are a whopping 84% energy efficient, but they produce just a sliver of waste heat, so the battery also has to spend energy heating the cabin, which reduces the car’s range as well, Northrop said. Duluth, which has a fleet of electric buses, has run into heating problems and relies on diesel heaters for warmth, he added.

Plus, current state-of-the-art batteries are expensive. Batteries cost around $200 per kilowatt-hour, Northrop said, and would need to cut that in half to be cost-competitive with combustion engines. The 2019 all-electric Nissan Leaf has a 62-kilowatt hour battery and a 226-mile range, according to Nissan’s website.

No oil, no problem

One potential advantage of electric vehicles is their lack of yearly maintenance. Northrop, McKeown and Schlueter all noted that because there are far fewer components in a battery-powered engine compared to a combustion engine, maintenance like oil changes and replacing spark plugs aren’t necessary. All she has to do is rotate her tires, McKeown added.

“In terms of yearly maintenance, there’s really not much to do,” Northrop confirmed. The biggest cost would be a battery replacement, he said, and that’s an infrequent need.

There’s not much data on maintenance costs for an all-electric fleet, Schlueter said, but based on current research, an electric vehicle fleet might cut maintenance costs in half, he estimated. On the flip side, most hybrid and electric cars are more expensive than combustion-engine vehicles and won’t pay for themselves over their lifetime, which is around 15 years in the fleet, he added.

“We want to do everything we can to minimize our carbon footprint,” Schlueter said, but “we have to temper that with taxpayer cost.”

Plans for all-electric fleets are exciting for Northrop and his research. They’re easy to study and can provide mountains of data to analyze.

One of McKeown’s biggest challenges is battling the public perception that electric vehicles aren’t a reliable choice for the everyday driver. She’s owned two generations of Nissan Leafs and has driven as far as Coon Rapids, Scandia and Rush City and back on a single charge. For the daily commuter whose main travel is a trip to and from work, and maybe some errands, an electric vehicle works well even with reduced range in cold weather. She ran out of battery once, McKeown admitted, but “that was my own fault, I was trying to test it.”

“Most people don’t travel 80 miles during the day,” she added.

Schlueter is facing similar challenges among some city staff.

“There are just some people that think, ‘This isn’t going to work,’” he said.

He hopes that by staff behind the wheel of a test vehicle, they can make a judgement based on personal experience instead of imagined problems. And at the end of the day, McKeown said, people’s opinions of electric vehicles are just as much of a hurdle as technological shortfalls. 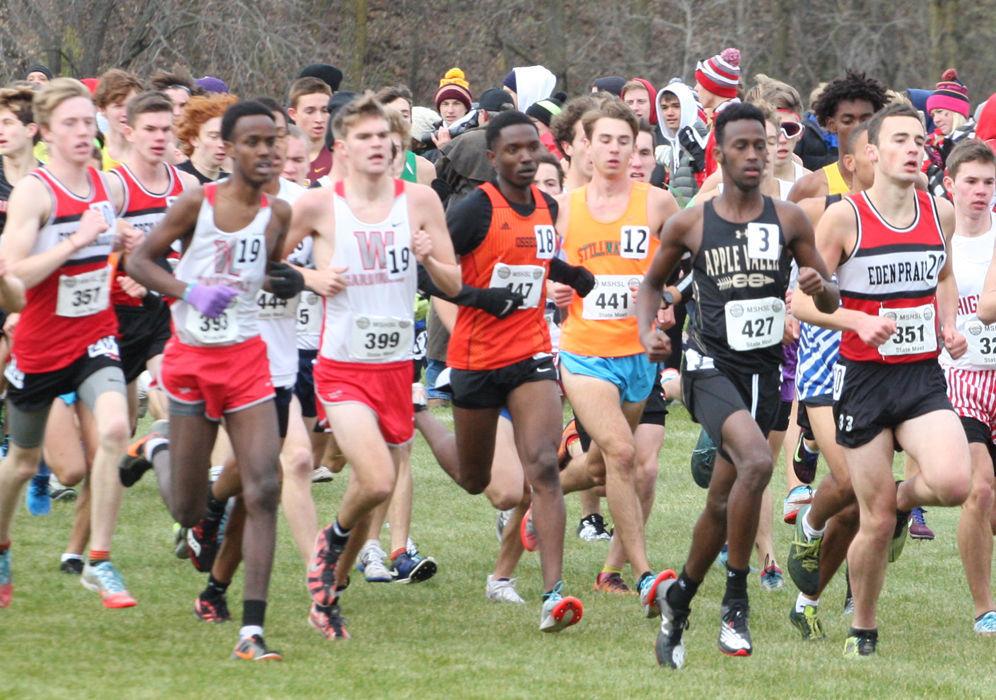