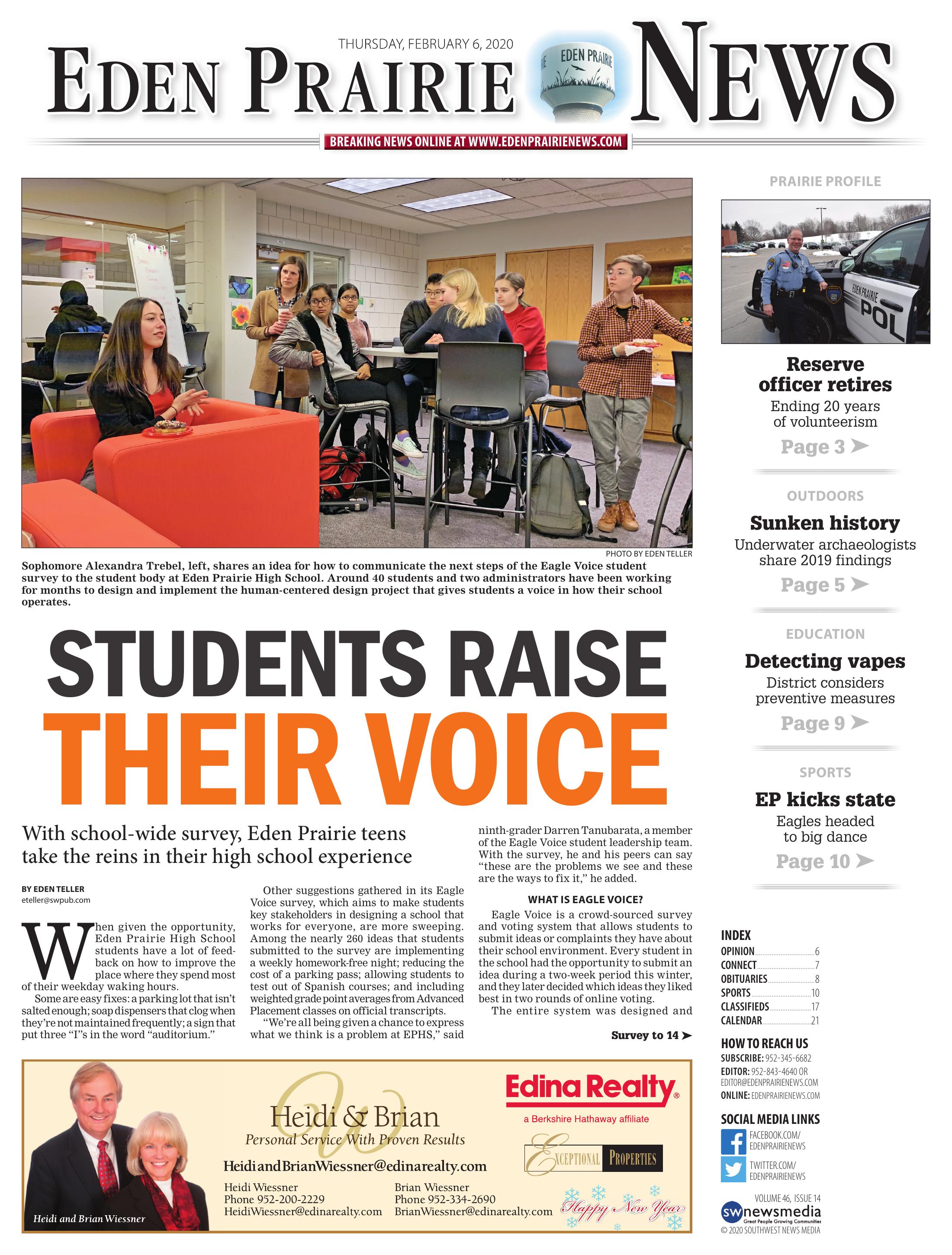 Education
top story
Student survey shows what teens would change at Eden Prairie High School. Now, they just have to do it.
Photo by Eden Teller

Sophomore Alexandra Trebel, left, shares an idea for how to communicate the next steps of the Eagle Voice student survey to the student body at Eden Prairie High School. Around 40 students and two administrators have been working for months to design and implement the human-centered design project that gives students a voice in how their school operates.

Eden Prairie High School Principal Robb Virgin reads about an idea that a student submitted to the Eagle Voice survey. The voting system was created in a collaboration between administrators and a group of 40 students.

A sign for the Eden Prairie High School auditorium was replaced as a result of the Eagle Voice survey because the original sign had been misspelled with three “I”s. Those are the kinds of changes administrators don’t notice, but make a difference for students, said Meagan Bennett, a school psychologist and adult facilitator of the Eagle Voice survey.

Eden Prairie High School Principal Robb Virgin posts about the Eagle Voice survey regularly on his official Instagram page to show students which of their suggestions have already been implemented.

When given the opportunity, Eden Prairie High School students have a lot of feedback on how to improve the place where they spend most of their weekday waking hours.

Some are easy fixes: a parking lot that isn't salted enough; soap dispensers that clog when they're not maintained frequently; a sign that put three "I"s in the word "auditorium."

Other suggestions gathered in its Eagle Voice survey, which aims to make students key stakeholders in designing a school that works for everyone, are more sweeping. Among the nearly 260 ideas that students submitted to the survey are implementing a weekly homework-free night; reducing the cost of a parking pass; allowing students to test out of Spanish courses; and including weighted grade point averages from Advanced Placement classes on official transcripts.

"We're all being given a chance to express what we think is a problem at EPHS," said ninth-grader Darren Tanubarata, a member of the Eagle Voice student leadership team. With the survey, he and his peers can say "these are the problems we see and these are the ways to fix it," he added.

What is Eagle Voice?

Eagle Voice is a crowd-sourced survey and voting system that allows students to submit ideas or complaints they have about their school environment. Every student in the school had the opportunity to submit an idea during a two-week period this winter, and they later decided which ideas they liked best in two rounds of online voting.

The entire system was designed and implemented by a 40-person team of students, with facilitation and input from Principal Robb Virgin and school psychologist Meagan Bennett. It was inspired by a teacher survey in the 2018-2019 school year. Teachers submitted 75 ideas and voted for their top choices, which ended up being a writing center, tutoring program, alternatives to out-of-school suspension, more strategic class sizes, and a revamp of the all-school academic intervention model, which the administration began to implement.

At the outset, the Eagle Voice team imagined they'd receive around 40 or 50 student-submitted ideas; instead, students submitted nearly 260 ideas to the survey. Engagement was high in the voting phase, too: the online voting system showed each voter pairs of ideas, and the voter selected which one they preferred before being presented with another pair. That's how with just over 3,000 students, the student body cast 36,000 individual votes when ranking the submitted ideas.

"The generation of kids in front of us has access to a lot of information," Virgin said. "When you show kids you trust them, most of the time they rise to the occasion."

The eventual goal of Eagle Voice is to make Eden Prairie High School a place where "every student knows they're safe and they have a voice," said Ria Jadhav, a 10th-grader and member of Eagle Voice leadership.

"All students have some sort of school culture," she added: whether or not they're engaged at school, it affects how everyone feels about their educational experience. "It's nice knowing that you can change it."

"People like to get focused on the ideas," Virgin agreed. "It really is mainly about culture."

The next step in Eagle Voice is on Feb. 14, when students and teachers are invited to a two-hour design workshop, where they'll to break into groups of 15-20 people to discuss the survey's top three to five ideas and how to implement a testing phase in the final quarter of the year.

"We want to be a thought leader in the state and country," Virgin said. To that end, he and Superintendent Josh Swanson wrote an article for the National Association for Secondary School Principals discussing Eagle Voice, human-centered design and increasing students' personal stakes in their school environment.

Around 40 students are part of the Eagle Voice team. They meet weekly with Virgin and Bennett at 7:30 a.m. on Tuesdays, where teams brainstorm ideas for marketing and problem solve different parts of the process.

Virgin did his part to advertise the voting periods − like including links in school-wide digest emails and posting about it on his official social media handles − but getting the word out about Eagle Voice is where the student leaders were "essential," Bennett said. "They're so creative."

Some on the leadership team, like 11th-grader Peyton West, have been involved in student leadership before; she helped redesign the school's media center. For others, like ninth-grader Ruth Noll, it's a new experience.

"It's working, that's the coolest part," she said. "We know where (the school's) flaws are now and how we can improve them."

Both teens and adults agreed that when administrators alone make decisions about changes to the school, they can overlook important "pain points" (as Virgin calls areas needing improvement). He and Bennett never would have noticed that bathroom soap dispensers get clogged when the soap inside settles for too long, but the students using them daily did, Bennett explained.

"Each student experiences our school in different ways," she said.

Prior to Eagle Voice, the pathway for student suggestions to reach the administrators in charge was long and unreliable, the student leaders said.

"(Suggestions) get passed down between people and it gets twisted," explained Alexandra Trebel, a 10th-grader.

"I've realized through this there's easier ways to have your voice heard," Jadhav observed.

Having students lead the charge makes staff interact differently with the proposed changes, too, Bennett said.

"There's a shift in staff involvement and change when students are at the table," she said. She hopes the natural end point of the Eagle Voice project will be a school with "staff and students in equal consultation in how to make EPHS better," she added.

On the cold Tuesday morning of Feb. 4, around 15 students gathered in the South Commons area of Eden Prairie High School to celebrate the success of the voting with Virgin and Bennett and talk about the next steps in the process. The consensus was that now more than ever, it's essential to show the student body that the school will take action on the results of the voting.

"Everyone has been like, 'Well, they say they'll do this but they won't,'" Trebel said.

He and Bennett have given a lot of thought to how to implement the ideas gathered from Eagle Voice. They hope to test the solutions from the Feb. 14 design workshop in small sections of the school during the fourth quarter of the year, after students return from spring break on April 7. And even if some of the programs don't work as intended, it's important to keep trying different iterations to solve the problem at the core of the idea, Bennett said.

"We have a tougher time accepting that the majority of ideas will fail," Virgin added.

On Feb. 4, Trebel and West tossed ideas out for how to spread word of the design workshop.

Bennett had written a list of places where Eagle Voice could advertise the workshop on a whiteboard: Banners in the library and common areas, painted signs on the library windows. When the group came back together, West suggested signs near the school's north and east entrances, where there's heavy foot traffic as students come and go during the day, could be more effective.

Other students nodded in agreement, and Bennett added it to the top of the list. 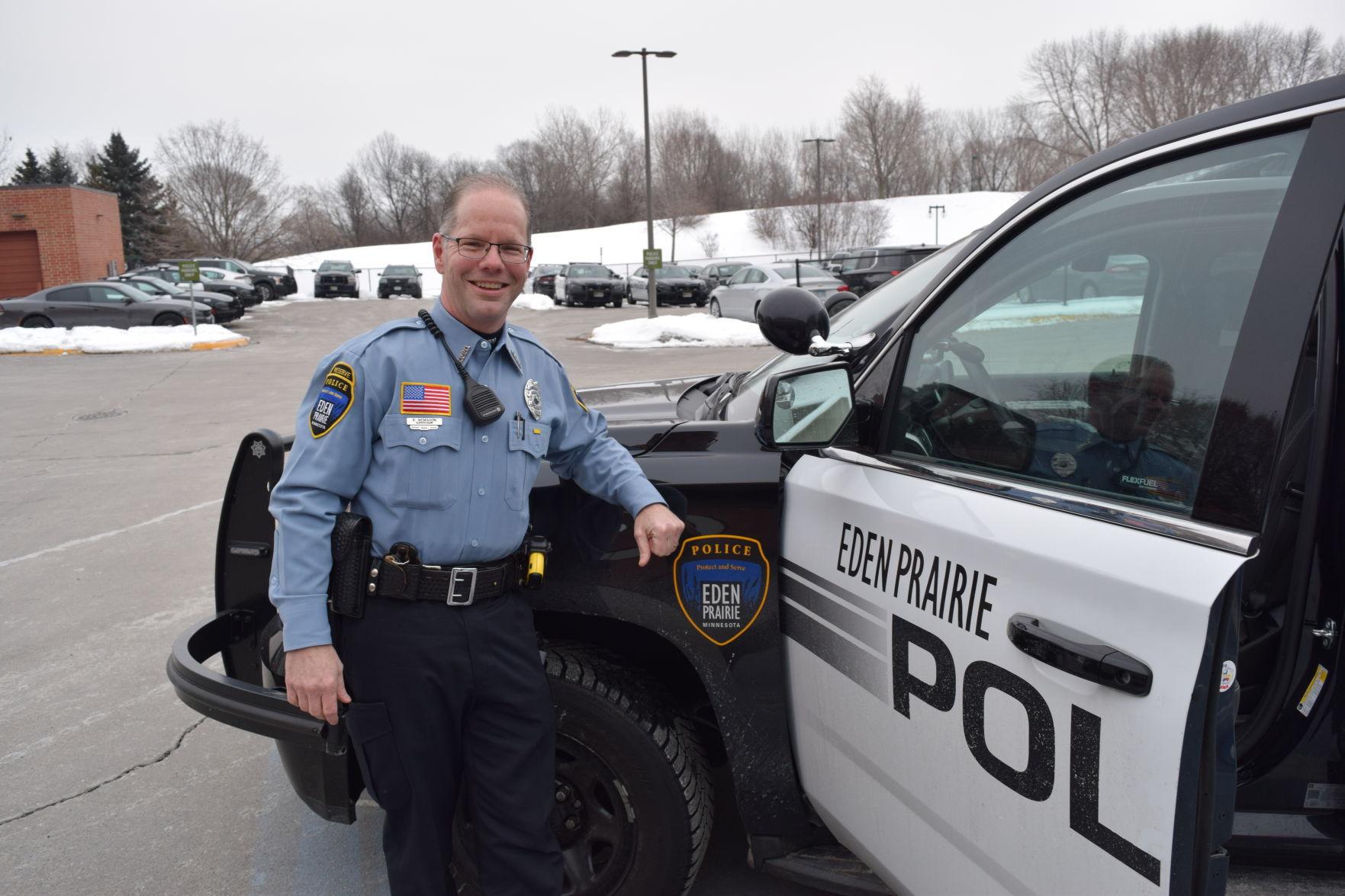 Eden Prairie Police reserve officer Brett McMahon is retiring from 20 years of volunteer service on Feb. 12. He reflected on his time on the force with his family and Eden Prairie News.