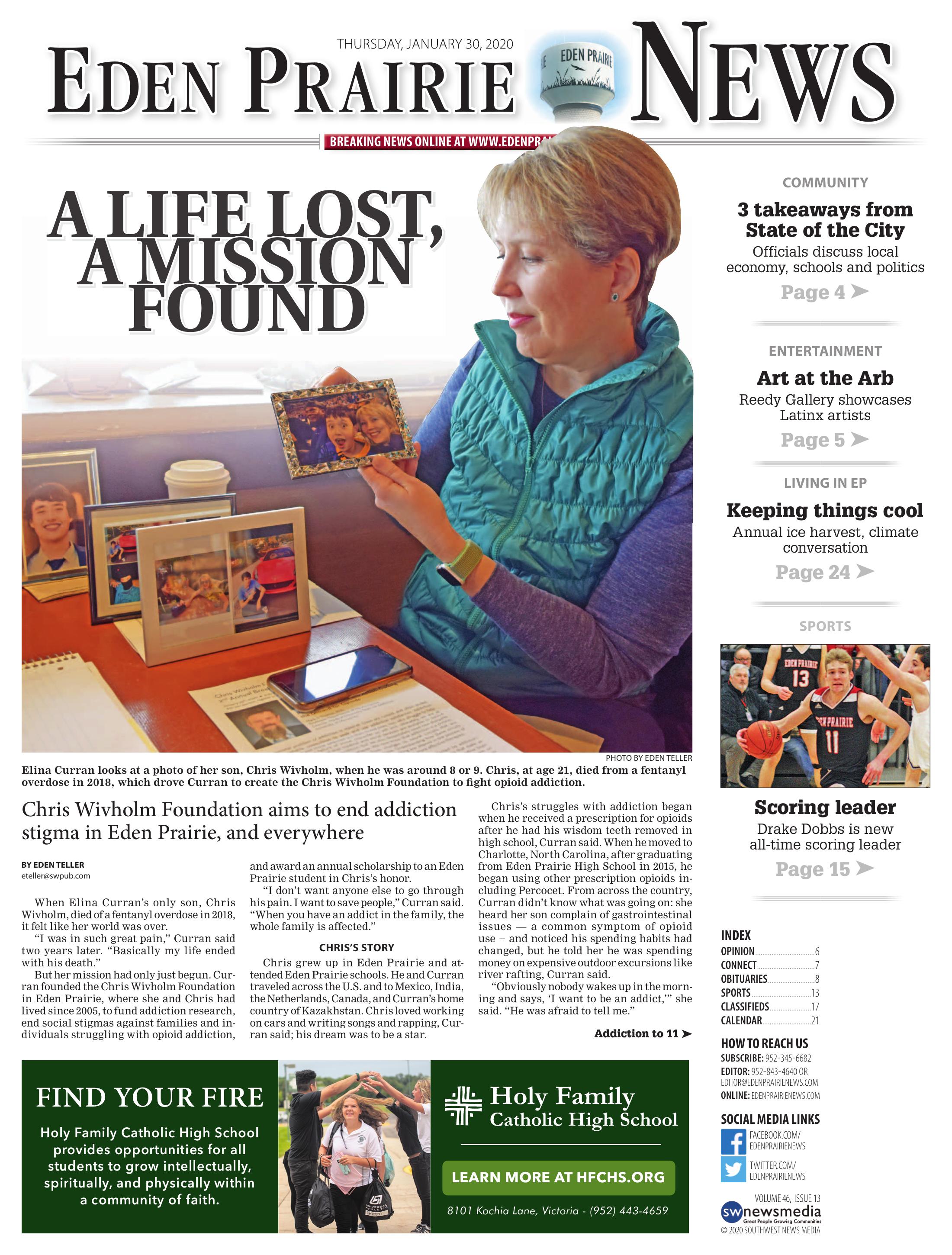 Elina Curran looks at a photo of her son, Chris Wivholm, when he was around 8 or 9. Chris, at age 21, died from a fentanyl overdose in 2018, which drove Curran to create the Chris Wivholm Foundation to fight opioid addiction.

When Elina Curran’s only son, Chris Wivholm, died of a fentanyl overdose in 2018, it felt like her world was over.

“I was in such great pain,” Curran said two years later. “Basically my life ended with his death.”

But her mission had only just begun. Curran founded the Chris Wivholm Foundation in Eden Prairie, where she and Chris had lived since 2005, to fund addiction research, end social stigmas against families and individuals struggling with opioid addiction, and award an annual scholarship to an Eden Prairie student in Chris’s honor.

“I don’t want anyone else to go through his pain. I want to save people,” Curran said. “When you have an addict in the family, the whole family is affected.”

Chris grew up in Eden Prairie and attended Eden Prairie schools. He and Curran traveled across the U.S. and to Mexico, India, the Netherlands, Canada, and Curran’s home country of Kazakhstan. Chris loved working on cars and writing songs and rapping, Curran said; his dream was to be a star.

Chris’s struggles with addiction began when he received a prescription for opioids after he had his wisdom teeth removed in high school, Curran said. When he moved to Charlotte, North Carolina, after graduating from Eden Prairie High School in 2015, he began using other prescription opioids including Percocet. From across the country, Curran didn’t know what was going on: she heard her son complain of gastrointestinal issues — a common symptom of opioid use − and noticed his spending habits had changed, but he told her he was spending money on expensive outdoor excursions like river rafting, Curran said.

“Obviously nobody wakes up in the morning and says, ‘I want to be an addict,’” she said. “He was afraid to tell me.”

Eventually, it was Chris’s girlfriend’s mother who connected the dots. She called Curran after she found Chris’s drugs in her home, and when Chris came home to celebrate his 21st birthday in December 2017, Curran helped him check into a 30-day residential treatment program. Chris began doing better, she said, but he crashed his car in February 2018 and was taken to the hospital for emergency surgery, where doctors gave him opioid painkillers.

On March 30, 2018, Chris died in St. Paul after buying a joint with heroin in it. It also contained fentanyl, which is around 80 times stronger than morphine, according to the U.S. Drug Enforcement Administration. He was 21.

“We’re losing so many young people under the age of 30 to this,” Curran said. “I never thought it would happen to me.”

Curran runs the Chris Wivholm Foundation with her friend Pat Haack and seven other board members. Their mission is to end the stigma around opioid addiction, fund research for addiction treatment and raise awareness of resources for addiction so families and individuals can get help before a fatal overdose.

“Not only do I grieve the loss of my child, I also face the stigma. People think, ‘Oh, he was a loser anyway,’” Curran said. “(It’s) the only disease the patient gets blamed for.”

To spread its message locally, the foundation has worked with Mark Thomas, a University of Minnesota professor of neuroscience and scientific director of the Medical Discovery Team on Addiction; the Eden Prairie Police Department; and State Sen. Steve Cwodzinski, D-Eden Prairie.

As a civics teacher, Cwodzinski taught Chris at Eden Prairie High School. It was only after he became a legislator that he began to learn how many of his former students became victims of the opioid crisis after graduating.

“Once they get their high school diplomas, you never hear from them,” Cwodzinski explained. “It’s much worse than I think we are willing to admit.”

After learning about Chris’s death through Curran, Cwodzinski introduced her to other local lawmakers who are on the state legislature’s opioid task force and spoke at a foundation event in 2019, Curran said. And as a legislator, he’s approaching the issue through the lens of his education experience.

“The number one (thing) everyone’s screaming for is more support staff in our schools,” Cwodzinski told Eden Prairie News. “The counselors are so overwhelmed, they’re acting from crisis to crisis and not doing preventative measures.”

During a visit to Eden Prairie High School on Jan. 24, he spoke with a school nurse who laid out the mental health challenges students face in stark terms.

“They have more needs than they did 33 years ago, when I started,” Cwodzinski said. “This has been their plight.”

“I don’t know how much worse the epidemic needs to get to get more money,” he added.

Eden Prairie has around 20 support staff in its multi-tiered support system, associate principal Molly Hollenbeck told Eden Prairie News. Every student is assigned a counselor with whom they can discuss grades and personal challenges, and when a student’s behavior raises warning signs for possible substance use, they and their family are referred to Hazelden’s addiction treatment center, which partners with Eden Prairie Schools, she added.

“Being an adolescent, you’re faced with all sorts of temptations and challenges,” Hollenbeck said. “Our job is to wrap around kids and really provide them with the care they need, whatever that is.”

The Chris Wivholm Foundation has also connected with city leadership to spread the word about opioid addiction. Curran has spoken with Eden Prairie Police Chief Greg Weber about working together on the initiatives that the Eden Prairie Police Department already has in place to address the opioid crisis.

The department has taken a multi-pronged approach to preventing and addressing opioid abuse, Weber said. It gives out free Deterra drug disposal bags at events and at the department’s front desk to help residents dispose of unused prescription medications, which are frequently the first step in many people’s addictions. It also has a major presence in Eden Prairie Schools in the form of the drug education program Counteract, and in 2015 both Eden Prairie police and firefighters were trained on how to use Naloxone, a drug that can prevent fatal opioid overdoses. And of course, “we’re trying to aggressively enforce those situations when we find people dealing,” Weber said.

“We’ve taken quite a few steps already to make sure the community is aware,” he added.

Weber first responded to an opioid-related death in 2011, when he was a police officer. Since then, the department has seen drug overdose calls rise from 10 in 2015 to a peak of 25 in 2018. It dropped to 20 overdose-related calls in 2019, Weber said, which is a good sign, but he’s cautious about making sweeping statements about drug abuse fading as a problem.

“If history repeats itself, it seems like when we see one particular drug decline in use, we see another one take its place,” he explained, noting the department has seen methamphetamine on the rise recently.

Weber attended the Chris Wivholm Foundation’s second annual breakfast event on Jan. 25, where attendees learned about the science behind addiction, discussed local treatment centers and resources and connected with each other to share personal connections to the foundation’s mission. For Curran, making that knowledge available is what it’s all about: maybe this knowledge can help another family like hers.

“Why wait for the overdose to happen?” she said. “When there’s a moment they’re ready, you need to know where the beds are available.”

3 takeaways from State of the City

Xavier Tavera is one of three Latinx artists featured in the Reedy Gallery’s newest exhibit at the Minnesota Landscape Arboretum.

Art at the Arb 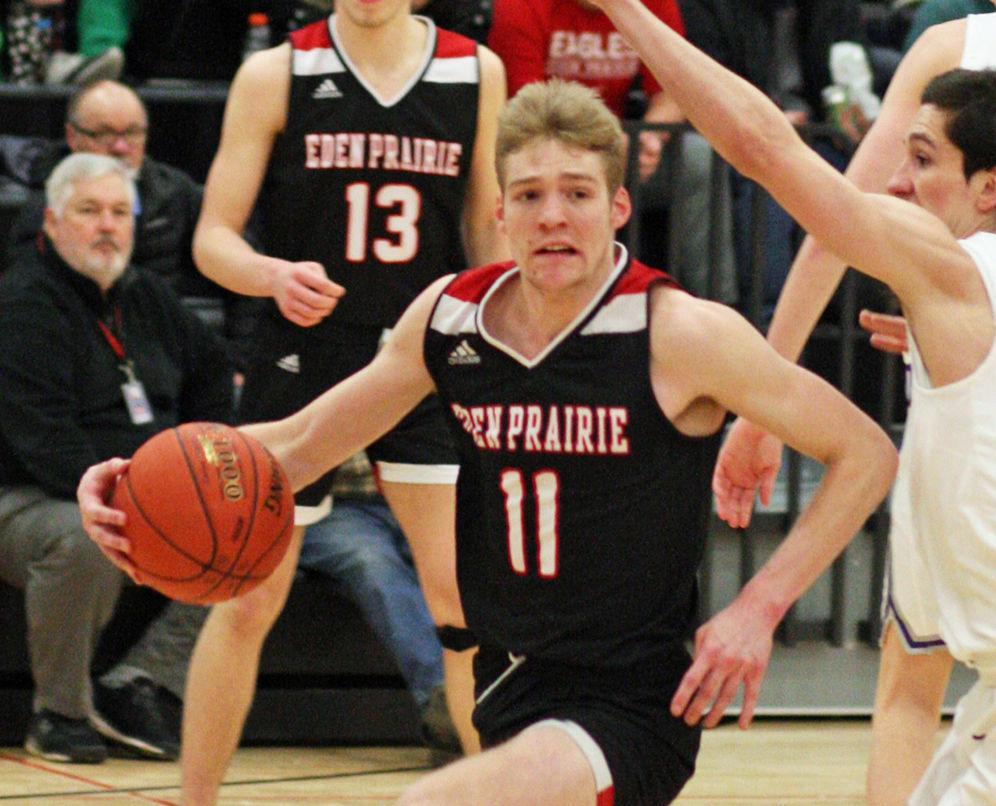