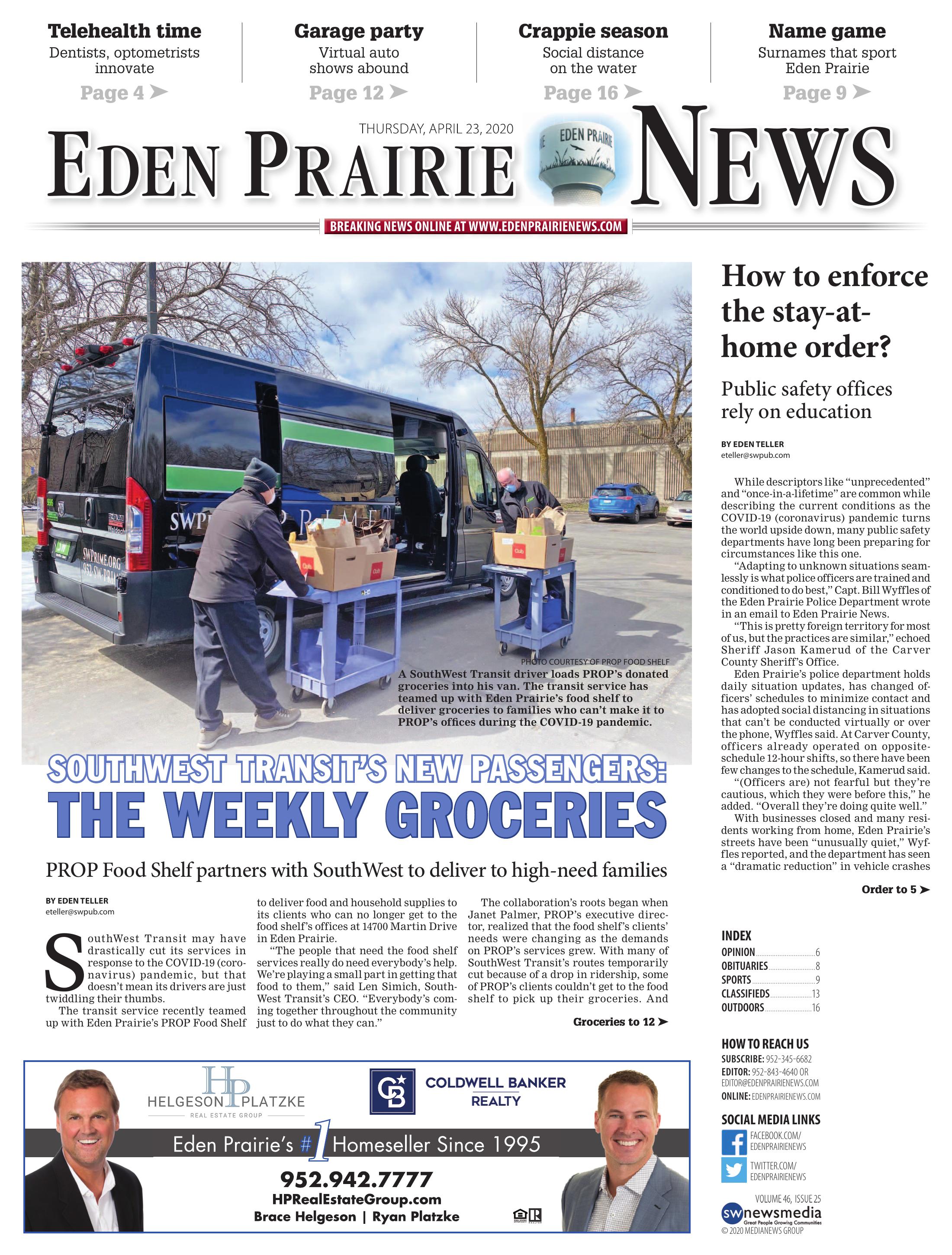 A SouthWest Transit driver loads PROP’s donated groceries into his van. The transit service has teamed up with Eden Prairie’s food shelf to deliver groceries to families who can’t make it to PROP’s offices during the COVID-19 pandemic.

SouthWest Transit may have drastically cut its services in response to the COVID-19 (coronavirus) pandemic, but that doesn’t mean its drivers are just twiddling their thumbs.

The transit service recently teamed up with Eden Prairie’s PROP Food Shelf to deliver food and household supplies to its clients who can no longer get to the food shelf’s offices at 14700 Martin Drive in Eden Prairie.

“The people that need the food shelf services really do need everybody’s help. We’re playing a small part in getting that food to them,” said Len Simich, SouthWest Transit’s CEO. “Everybody’s coming together throughout the community just to do what they can.”

The collaboration’s roots began when Janet Palmer, PROP’s executive director, realized that the food shelf’s clients’ needs were changing as the demands on PROP’s services grew. With many of SouthWest Transit’s routes temporarily cut because of a drop in ridership, some of PROP’s clients couldn’t get to the food shelf to pick up their groceries. And those who could were sent home with a bigger burden: the food shelf has switched from weekly pickups to every other week and increased the amount of food that people go home with, which is hard to manage on public transit.

Palmer turned to SouthWest Transit to ask if it could help.

“I asked them if they could think creatively,” she told Eden Prairie News. “They were great, came back and said ‘hey, we’ve talked internally and we have an idea.’”

SouthWest proposed that a single driver pick up the boxes of food from PROP and deliver them to around 50 households throughout the month, dropping the boxes outside the clients’ doors to ensure a no-contact pickup. They’re providing the service to PROP for free, Simich added. To make matters better, an employee of the city of Eden Prairie is helping coordinate delivery times and driving routes for PROP so the food shelf’s case managers don’t have to take on that additional workload, Palmer said.

The first delivery occurred on April 15, and Palmer and Simich are looking forward to continuing and potentially adding more capacity to the services as needs increase. Because the demand for services is so low at the moment, one of SouthWest’s 30 presently-employed drivers is practically guaranteed to be available to fulfill that need if necessary, Simich added.

SouthWest Transit is also considering a partnership with local grocery stores to deliver food to senior citizens who are afraid to walk into a crowded store and risk coming into contact with the coronavirus, Simich said.

While the shift to socially distanced services in March was abrupt for PROP, the employees are getting used to their new routines, Palmer said.

While demand for PROP’s service have remained steady since the pandemic hit, Palmer and the rest of the staff are bracing for an influx of clients as the crisis continues.

“We know we’re going to need a lot for housing and other financial emergency services,” she noted. “We’re kind of the last resort.”

She encouraged would-be donors to visit the food shelf’s most-needed items page and to contribute financially when able. The website is www.propfood.org.

While the Eden Prairie City Center and Police Department at 8080 Mitchell Road is closed to visitors, essential officers and employees are still coming to work to keep the city running.

While descriptors like “unprecedented” and “once-in-a-lifetime” are common while describing the current conditions as the COVID-19 (coronavirus) pandemic turns the world upside down, many public safety departments have long been preparing for circumstances like this one.

“Adapting to unknown situations seamlessly is what police officers are trained and conditioned to do best,” Capt. Bill Wyffles of the Eden Prairie Police Department wrote in an email to Eden Prairie News.

“This is pretty foreign territory for most of us, but the practices are similar,” echoed Sheriff Jason Kamerud of the Carver County Sheriff’s Office.

Eden Prairie’s police department holds daily situation updates, has changed officers’ schedules to minimize contact and has adopted social distancing in situations that can’t be conducted virtually or over the phone, Wyffles said. At Carver County, officers already operated on opposite-schedule 12-hour shifts, so there have been few changes to the schedule, Kamerud said.

“(Officers are) not fearful but they’re cautious, which they were before this,” he added. “Overall they’re doing quite well.”

With businesses closed and many residents working from home, Eden Prairie’s streets have been “unusually quiet,” Wyffles reported, and the department has seen a “dramatic reduction” in vehicle crashes and traffic violations. In contrast to the Carver County Sheriff’s Office and many other jurisdictions in the state, Eden Prairie police have received fewer domestic-related calls, he added.

It hasn’t been a universal decrease in activity, though. The stores that are still open have called in more thefts and shoplifting in recent weeks, Wyffles said, and there’s been an increase of applications for permits to buy guns in the city.

As always, officers patrol businesses that are closed − there are just more of them now, Wyffles said. The department has also been sending more officers to the few essential businesses that remain open “to help people feel protected and safe,” he wrote.

Most people and businesses have complied with the governor’s stay-at-home order, and when the sheriff’s office receives the few calls related to social distancing violations, officers’ approach is education first.

“Our approach is, we are trying to get voluntary compliance. We put all of our effort into educating and informing about what the stay-at-home order means,” Kamerud said.

There was one nonessential business in Chanhassen that the sheriff’s office visited a few times because its owners kept opening for business, Kamerud said, but even then he understands the motivations behind the violation.

“I get it, they have mortgages and lease payments for their property,” he said.

For businesses who knowingly and repeatedly violate the order, Kamerud suggested that instead of criminal charges, most cases could be handled with some penalties regarding the businesses’ licenses. For individual people, the risk of incurring a misdemeanor charge for violating the stay-at-home order comes only after officers have informed them of the violation and they continue to violate the order, both Wyffles and Kamerud said.

“The key is to make sure that people have been warned and they have an understanding and if they have that, it can be argued that any subsequent violation is a willful violation,” Kamerud explained.