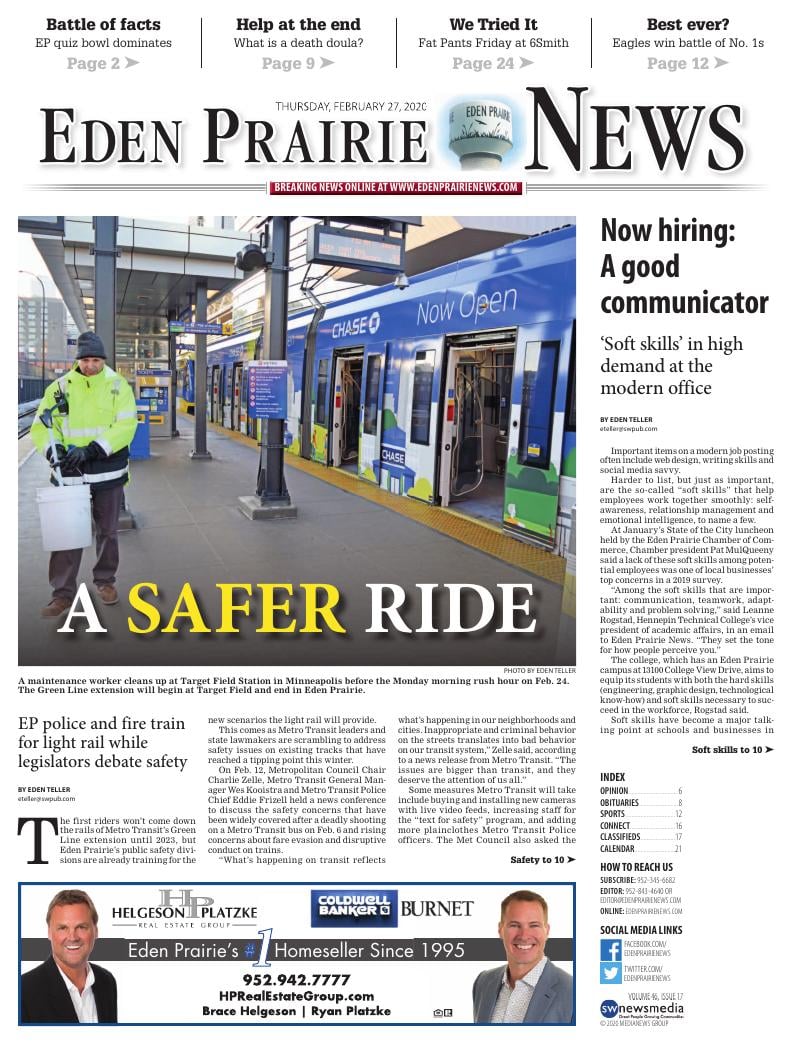 The first riders won’t come down the rails of Metro Transit’s Green Line extension until 2023, but Eden Prairie’s public safety divisions are already training for the new scenarios the light rail will provide.

This comes as Metro Transit leaders and state lawmakers are scrambling to address safety issues on existing tracks that have reached a tipping point this winter.

On Feb. 12, Metropolitan Council Chair Charlie Zelle, Metro Transit General Manager Wes Kooistra and Metro Transit Police Chief Eddie Frizell held a news conference to discuss the safety concerns that have been widely covered after a deadly shooting on a Metro Transit bus on Feb. 6 and rising concerns about fare evasion and disruptive conduct on trains.

“What’s happening on transit reflects what’s happening in our neighborhoods and cities. Inappropriate and criminal behavior on the streets translates into bad behavior on our transit system,” Zelle said, according to a news release from Metro Transit. “The issues are bigger than transit, and they deserve the attention of us all.”

The topic of rider safety on Metro Transit has “come to a head” this winter, according to state Rep. Brad Tabke, DFL-Shakopee. He has sponsored a bill that would establish an ambassador program, called Transit Riders Investment Program (TRIP). If passed into law, it would add TRIP personnel trained in deescalation who could check passengers’ fares, give citations for fare evasion and conduct violations.

The six-month pilot would hire 35 people, the Metro Transit news release says, and if continued, 90 full-time employees would eventually monitor the trains in addition to Metro Transit Police.

“They’re there to help and augment what the police department is doing,” Tabke told Eden Prairie News. Behavior that requires something more than “a stern look or a hug” would be relegated to police, he explained.

Rep. Jerry Hertaus, R-Greenfield, who represents a swath of cities in western Hennepin County, including a portion of the Lake Minnetonka area, told the paper about a series of bills that House Republicans introduced in mid-February, including one that would have an independent assessor conduct a safety review of the Metro Transit system by Feb. 15, 2021. The review would investigate the roots of recent criminal activity, reduce fare evasion and conduct violations; and suggest options to reduce those behaviors.

The money lost from fare evasions every year could be funding more cameras and police officers on the transit system, Hertaus said. He’s skeptical as to how TRIP personnel would help in some of the situations that have been in the local news cycle.

“I would feel better as a patron knowing that person isn’t just an ambassador,” Hertaus said. “If somebody’s got a gun or a knife, then I don’t see how an ambassador is going to help.”

Metro Transit communications and outreach manager Sam O’Connell echoed Zelle’s sentiment that the increased disturbances on public transit are signs that the light rail, now 16 years old, has become a part of the community fabric. Addressing these problems will take a multi-pronged approach, she added.

“Part of this is just a maturation of the system,” she said. “I don’t know if there’s ever a silver bullet that will reduce all of this altogether.”

Far from the halls of the state Capitol, Southwest LRT extension project director Jim Alexander and Eden Prairie leaders are already laying the groundwork to create a cohesive response network to any issues that arise on the future train tracks. Alexander also worked on the Green Line corridor through Minneapolis and understands the importance of working ahead.

“We did a lot of groundwork early on,” he told Eden Prairie News. While behind-the-scenes training and networking with local police forces began years in advance, Minneapolis’s public-facing safety campaign began in earnest around a year before the stations opened. The process will look much the same for Eden Prairie, he said.

That means everything from visiting schools and senior centers to show residents how to safely navigate around trains where they intersect with streets, to teaching new riders how to buy a ticket and avoid accidental fare evasion.

“It’s unique to transit policing in that it goes through each and every community multiple times a day,” Weber said of the light rail. “I think LRT is different, and so it brings questions.”

Gerber is already considering the unique challenges, or opportunities, provided by the light rail: A 60-foot tunnel under Highway 62 and the rail’s elevated platforms are new territories for Eden Prairie’s firefighters and medical teams.

Training from the Met Council will help Gerber and the rest of the city’s firefighters learn how to ventilate smoke from a tunnel and how to access a train that may be stopped between platforms on the elevated section, among other new situations the light rail may present.

“It’s an exciting time in some ways,” Gerber reflected. “This is going to be new. How do we prepare?”

While the recent shooting and proposed bills are contributing to a flurry of debate about how to ensure train rides are safe and comfortable, Weber’s years of experience with Eden Prairie’s police officers grants him a degree of confidence and calm. The new development around the light rail will bring more people to Eden Prairie, which means more calls for service, he said, but the city’s police officers and staff can handle it.

“They rise to the occasion and they take care of issues,” Weber said.

"It's an exciting time in some ways. This is going to be new. How do we prepare?"

Business
top story
'Soft skills' are in high demand among employers. But what are they?
Eden Teller  / By Eden Teller eteller@swpub.com
02.25.20
Eden Teller / Photo by Eden Teller

Krirstin Jonason, a consultant at the Prouty Project, circles the room while Eden Prairie Chamber of Commerce members discuss situations when they’ve used emotional intelligence in the workplace.

Kristin Jonason lingers after her presentation about emotional intelligence at an Eden Prairie Chamber of Commerce women’s luncheon to answer a question.

Harder to list, but just as important, are the so-called “soft skills” that help employees work together smoothly: self-awareness, relationship management and emotional intelligence, to name a few.

At January’s State of the City luncheon held by the Eden Prairie Chamber of Commerce, Chamber president Pat MulQueeny said a lack of these soft skills among potential employees was one of local businesses’ top concerns in a 2019 survey.

“Among the soft skills that are important: communication, teamwork, adaptability and problem solving,” said Leanne Rogstad, Hennepin Technical College’s vice president of academic affairs, in an email to Eden Prairie News. “They set the tone for how people perceive you.”

The college, which has an Eden Prairie campus at 13100 College View Drive, aims to equip its students with both the hard skills (engineering, graphic design, technological know-how) and soft skills necessary to succeed in the workforce, Rogstad said.

Soft skills have become a major talking point at schools and businesses in the last decade as technology has transformed the workplace. Instructors at Hennepin Tech take cues for their lesson plans from the college’s advisory board of tradespeople and business leaders, Rogstad said. In some classes, they assign collaborative projects in technical classes to teach teamwork and adaptability; in others, students give regular short presentations on information technology news to learn how to share information and explain concepts verbally.

“(Students) credit their instructor for preparing them for the workforce and teaching more than just how to reconfigure a router,” she added.

“It’s not what work you do, but how you do the work,” suggested Julianne Tremba, a member of the Chamber.

“It’s learning how to take a step back before you speak or act,” hypothesized Samantha Redmond, another member.

Neela Kirankumar, an Eden Prairie High School student and youth member of the Chamber, seemed familiar with emotional intelligence already, describing it as “understanding and taking into account other people’s feelings.”

“Especially in today’s workplace, a lot of the skills people look for when hiring are soft skills,” she added.

Kristin Jonason, a consultant with the Prouty Project at 6385 Old Shady Oak Road, led the luncheon’s attendees through thought exercises and conversation as she explored emotional intelligence. The audience brainstormed traits of a good or bad leader (some positives: compassion, responsibility, flexibility; some negatives: volatility and lack of trust) and reflected on how they could better manage their emotions and relate to their coworkers.

“In a world of cell phones and social media and email, we’re losing a lot of opportunity to connect face-to-face,” Jonason told Eden Prairie News after the presentation. “It’s become more apparent because of the digital world we live in.”

Part of the emotional intelligence’s importance is the fact that employers expect that applicants have the “hard” job skills necessary for a given position, like database management experience or a degree in physics. The soft skills are what set someone apart immediately in an interview or workplace conversation, she said.

“The hard skills you can pretty much teach anyone,” added Kaitlin White, a Prouty Project consultant who attended the luncheon.

“Connecting with each other is going to be more and more important,” Jonason stated. “Emotional intelligence isn’t going away.”

"In a world of cell phones and social media and email, we're losing a lot of opportunity to connect face-to-face. It's become more apparent because of the digital world we live in." 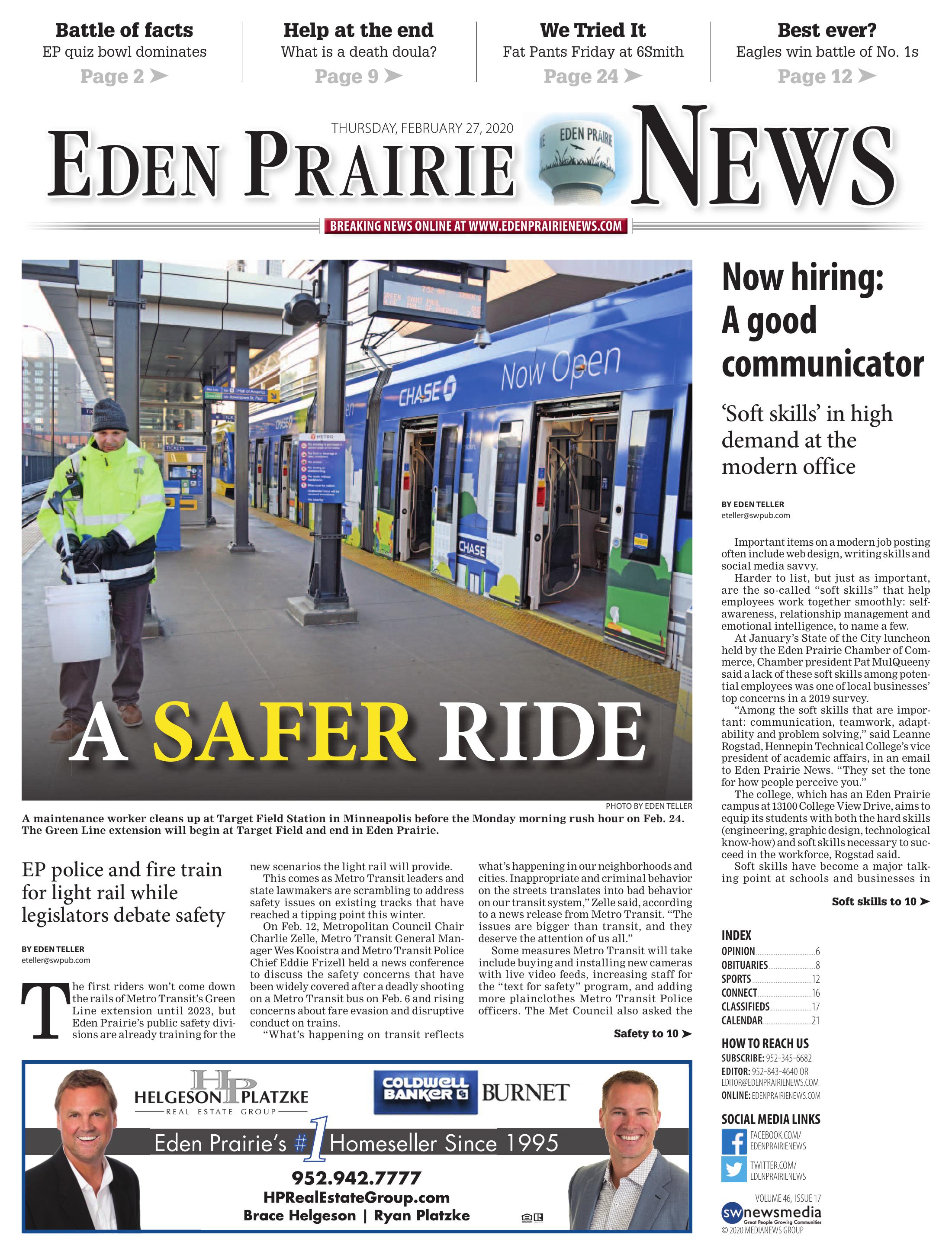