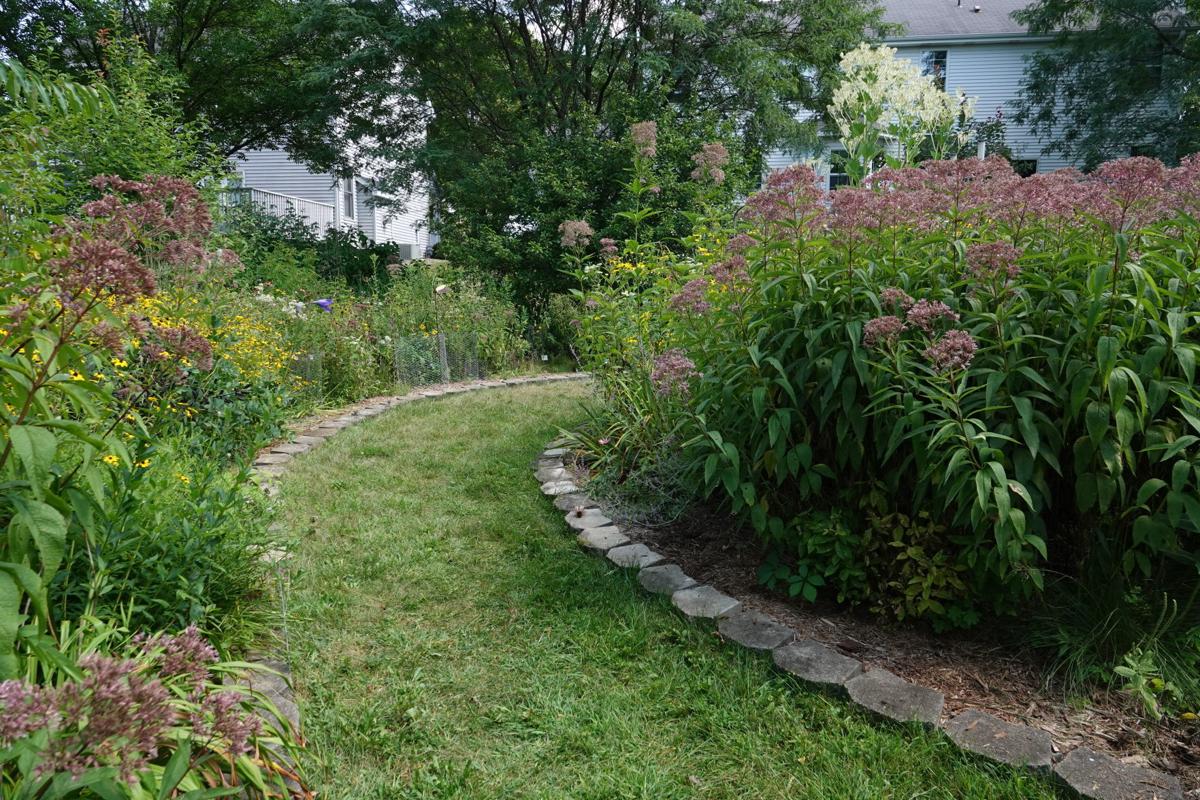 A path through Marilynn Torkelson’s native plant garden in summer is ringed by blooming flowers, all of which provide important food to pollinator species. 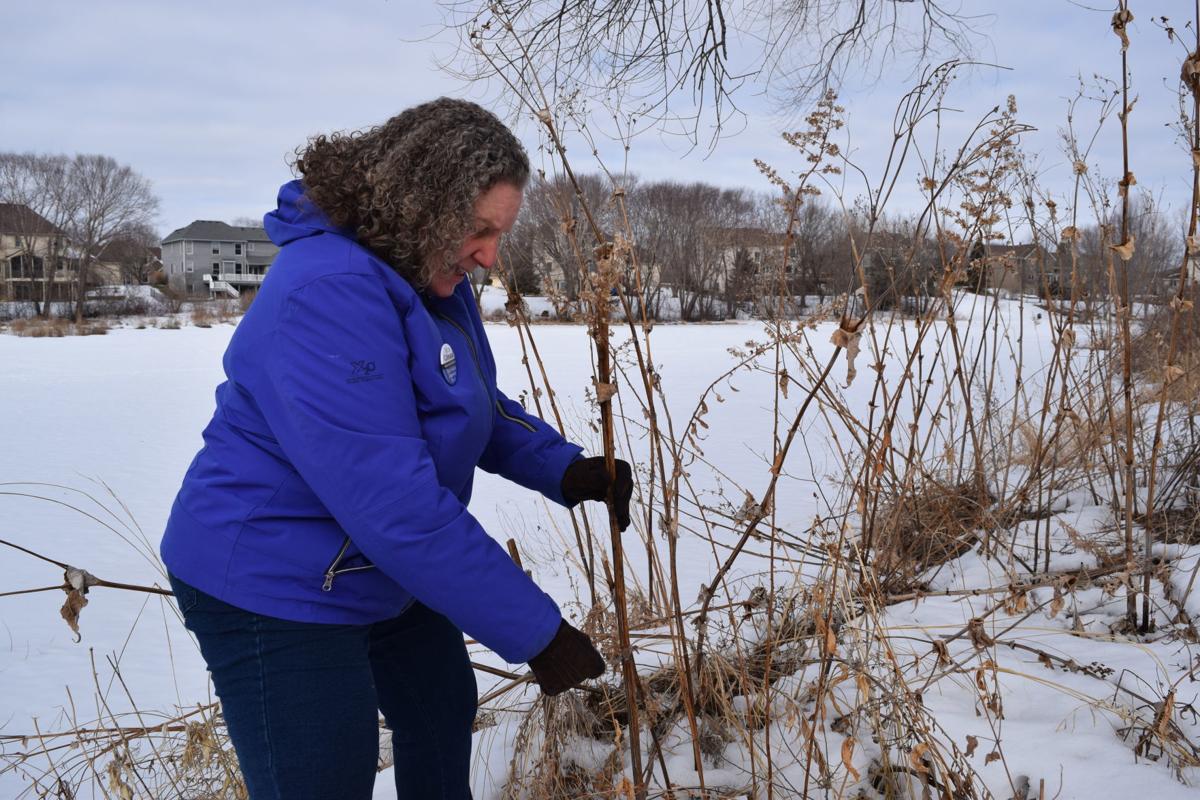 Marilynn Torkelson inspects a stalk in her pollinator-friendly garden. She’ll leave broken stalks on the ground through the summer to provide homes for native bees. 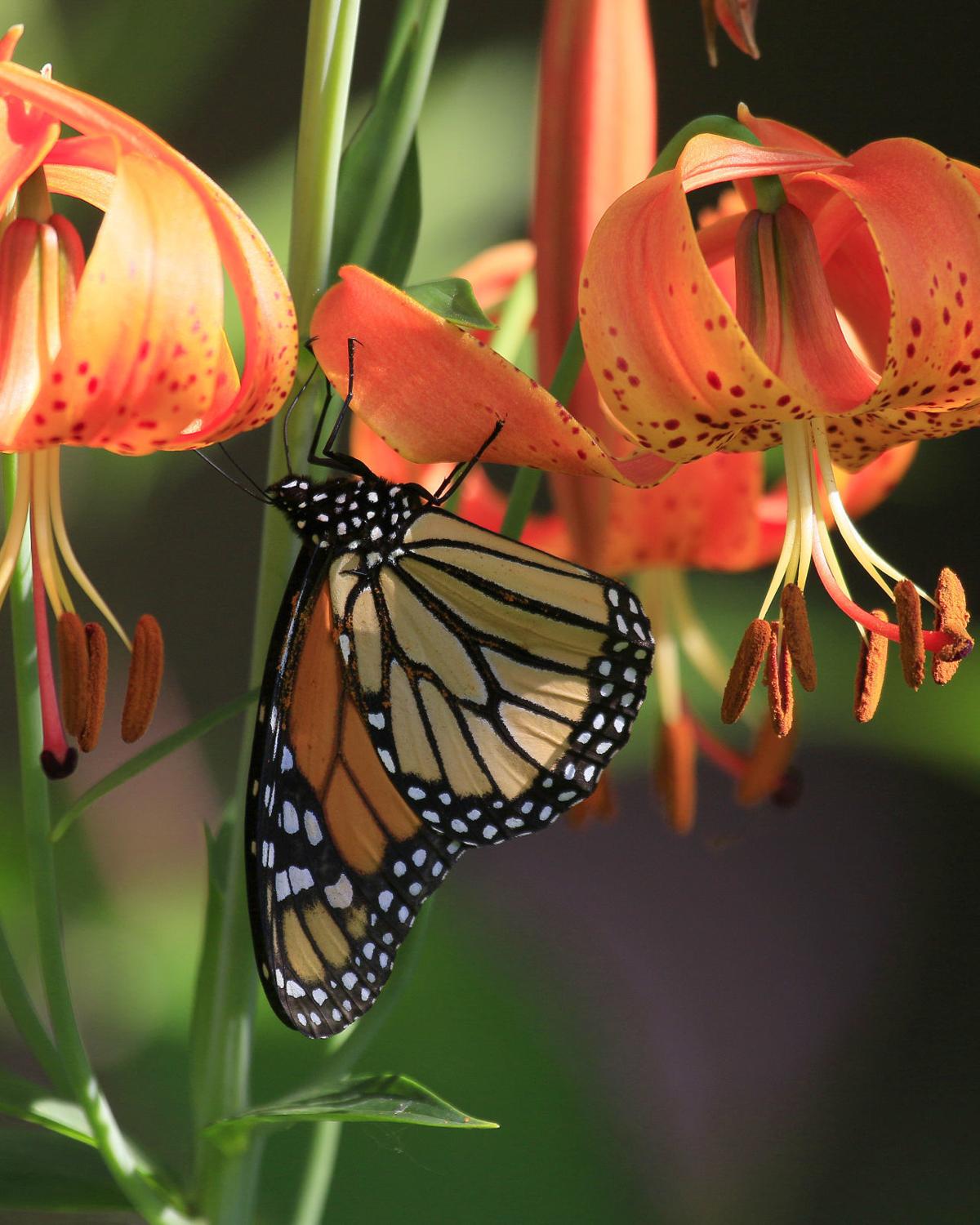 A monarch butterfly rests on a flower in Marilynn Torkelson’s yard. The migrating butterflies often travel along the Mississippi River because there are so many native plants to visit, but planting native flowers in suburban gardens can draw the insects to a broader swath of land. 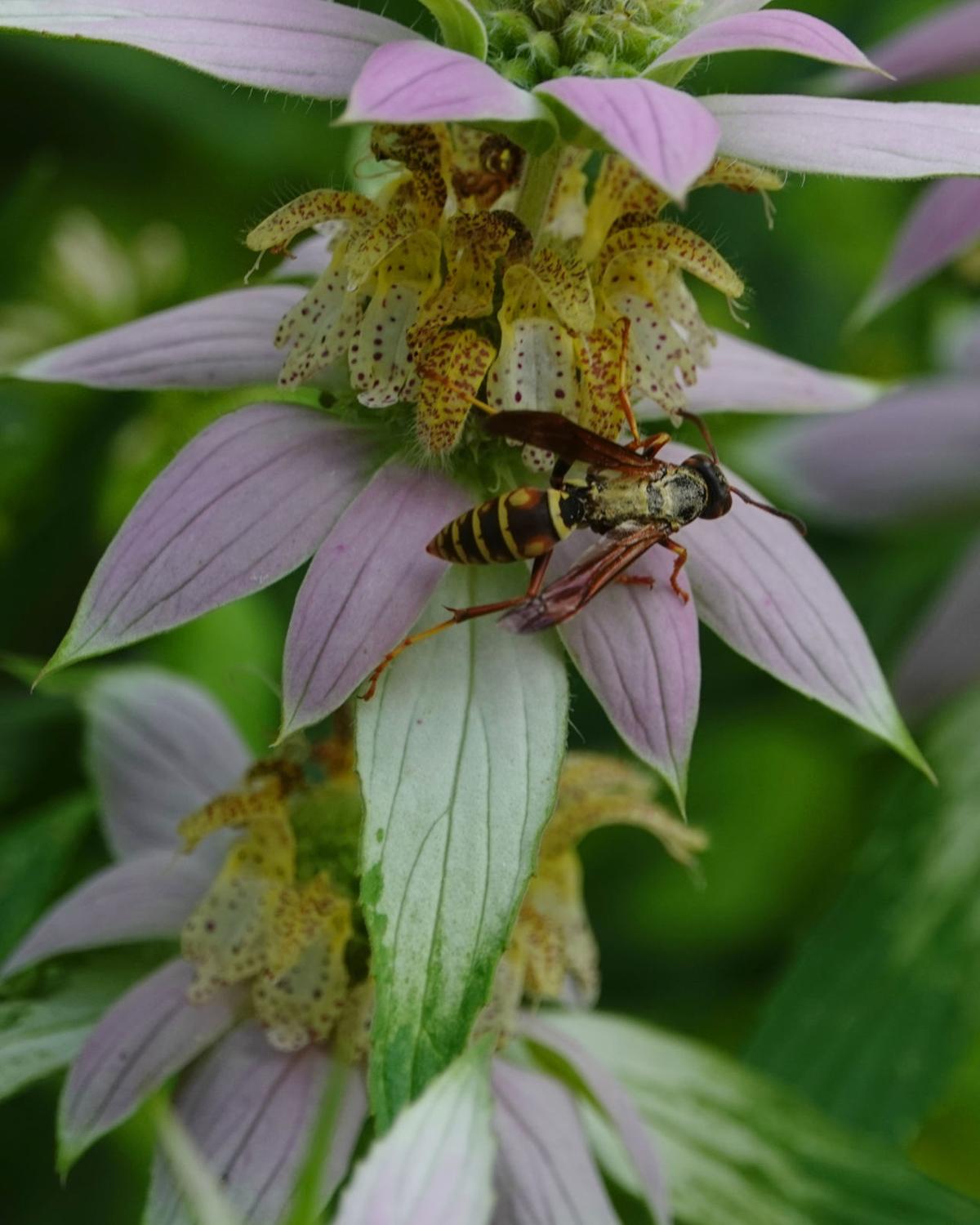 A wasp crawls on a spotted horsemint plant in Marilynn Torkelson’s yard. The native plant is an important part of the pollination ecosystem.

A path through Marilynn Torkelson’s native plant garden in summer is ringed by blooming flowers, all of which provide important food to pollinator species.

Marilynn Torkelson inspects a stalk in her pollinator-friendly garden. She’ll leave broken stalks on the ground through the summer to provide homes for native bees.

A monarch butterfly rests on a flower in Marilynn Torkelson’s yard. The migrating butterflies often travel along the Mississippi River because there are so many native plants to visit, but planting native flowers in suburban gardens can draw the insects to a broader swath of land.

A wasp crawls on a spotted horsemint plant in Marilynn Torkelson’s yard. The native plant is an important part of the pollination ecosystem.

Ten years ago, Marilynn Torkelson was a traditional gardener who filled her yard with lush ornamental plants.

Then she attended a rain garden workshop and learned about the impact of lawns and non-native species on local environments. It sparked a fire in her soul, and Torkelson founded the Prairie's Edge chapter of Wild Ones, a national not-for-profit that educates people about native ecosystems and their connections to the environment and climate change.

"I had no idea the connection between the environment and native plants. That was a real eye-opener for me," Torkelson said. "I'd gotten used to thinking of honeybees as our only bees."

In fact, there are almost 500 bee species native to Minnesota, and thousands more insect species that fill vital ecological niches by pollinating the state's native plants. And while the ornamental, non-native plants that inhabit many Minnesotans' yards are beautiful, most lack the nutritional value that pollinators need to survive.

"Cultivars were bred for our eyes to enjoy," explained Shirley Mah Kooyman, a plant information specialist at Natural Shore Technologies in Maple Plain who previously worked at the Minnesota Landscape Arboretum in Chanhassen. "They've bred some of the things that are of value to pollinators, out."

Alan Branhagen is the director of operations at the Arboretum and specializes in native insects and bird species. Switching to native, pollinator-friendly plants is the best thing people can do for pollinators, he said.

"They've evolved together since time immemorial," he said. "It's shocking how many of our native pollinators are specialists," or species that can only survive with nutrition from a single plant.

And while some homeowners may hesitate to attract more insects to their yard, Minnesota's local pollinators have a "live and let live" policy, Branhagen added.

"Most of our native bees will never, ever bother you," he said.

Converting to a pollinator-friendly garden isn't all or nothing. Kooyman has a row of non-native apple trees in her yard, but fills the area beneath them with shade-loving native plants.

"I used to be a purist, it had to be all native or all cultivated," Kooyman remembered. "My rough edges softened at the Arboretum."

When a gardener asks her how to switch to native plants, Kooyman recommends starting with a small patch or a corner of the yard instead of transforming the entire garden at once.

"What they've seen in Better Home and Garden magazine is usually too big a project," she explained.

But what starts out as a small patch easily becomes a passion project, especially for homeowners with a green thumb, Kooyman said.

"I have a plant addiction like all other gardeners," she laughed.

And having a patch of native plants can even improve the health of non-native plants in the yard, Torkelson said. When she first started transitioning her yard to a native landscape, she kept a non-native blue spruce tree in one corner. Its growth had stalled for years, but the season after she planted the native garden around its base, she noticed that quickly began gaining inches. That's because the native plants' deep-reaching roots were improving the soil quality far below the surface, allowing the spruce to absorb more nutrients from the ground.

All yards are not created equal. Some have strong day-long sunlight, others are shaded; some have sandy soil, others are all clay. One of Kooyman's specialties is advising gardeners on which types of native plants would do best in their specific yard.

"Sometimes people will look at a picture and say, 'Oh, I want to grow that plant' and not consider the environmental conditions necessary," she noted. "There are those things that beginning gardeners kind of forget."

Finding a store to buy a variety of healthy native plants can be difficult too, the gardeners said.

"You want to use local ecotypes grown without harmful chemicals," Torkelson agreed.

Natural Shore Technologies' primary business is restoration, but it has a retail storefront at 6275 Pagenkopf Road in Maple Plain. Kooyman and her colleagues educate gardeners about native species, help them pick the right plants for their yard conditions and demonstrate how pollinators gardens look with show gardens in the summer.

"We're kind of a secret in the southwest suburbs," Kooyman said.

One of the joys of Torkelson's first winter with a pollinator garden was how much easier the autumn preparation was, she said. While many traditional gardeners clear out their yards before the snow falls, it's better for native plants to allow the detritus to lay under the snow all winter. It provides food and habitats for nesting insects and hungry birds, Torkelson explained.

"I don't cart anything away," Branhagen said of his autumnal garden upkeep.

Still, a lazy gardener shouldn't get too excited.

"There is no such thing as a no-maintenance landscape," Branhagen added. Mulching dead leaves that gather under trees and shrubs helps them decompose faster, and it's important to keep an eye out for invasive species like buckthorn.

Growing native plants has reduced Torkelson's workload in other ways, she said: Because their roots reach so deep into the ground, they retain moisture longer during dry spells and soak up excess water in wet periods. She's even noticed that her sump pump runs less frequently now that she has a pollinator garden.

Gardeners can find inspiration for a pollinator garden at the Minnesota Landscape Arboretum, or at the Eloise Butler Wildflower Garden in Minneapolis, which is the oldest wildflower garden in the U.S., Branhagen said.

"The butterflies and the bees and the birds are their own reward," Torkelson said. "It was so loud that I could hear the buzzing from a yard away, it was just amazing."

The joy of a pollinator garden isn't limited to its owner, either. After Branhagen transitioned his yard to more native species, he bumped into a neighbor who frequently walked his dog past Branhagen's yard, and the neighbor complimented the natural garden, noting that he "(loves) walking by your yard because you have so many crickets, it makes it a magical experience," Branhagen related.