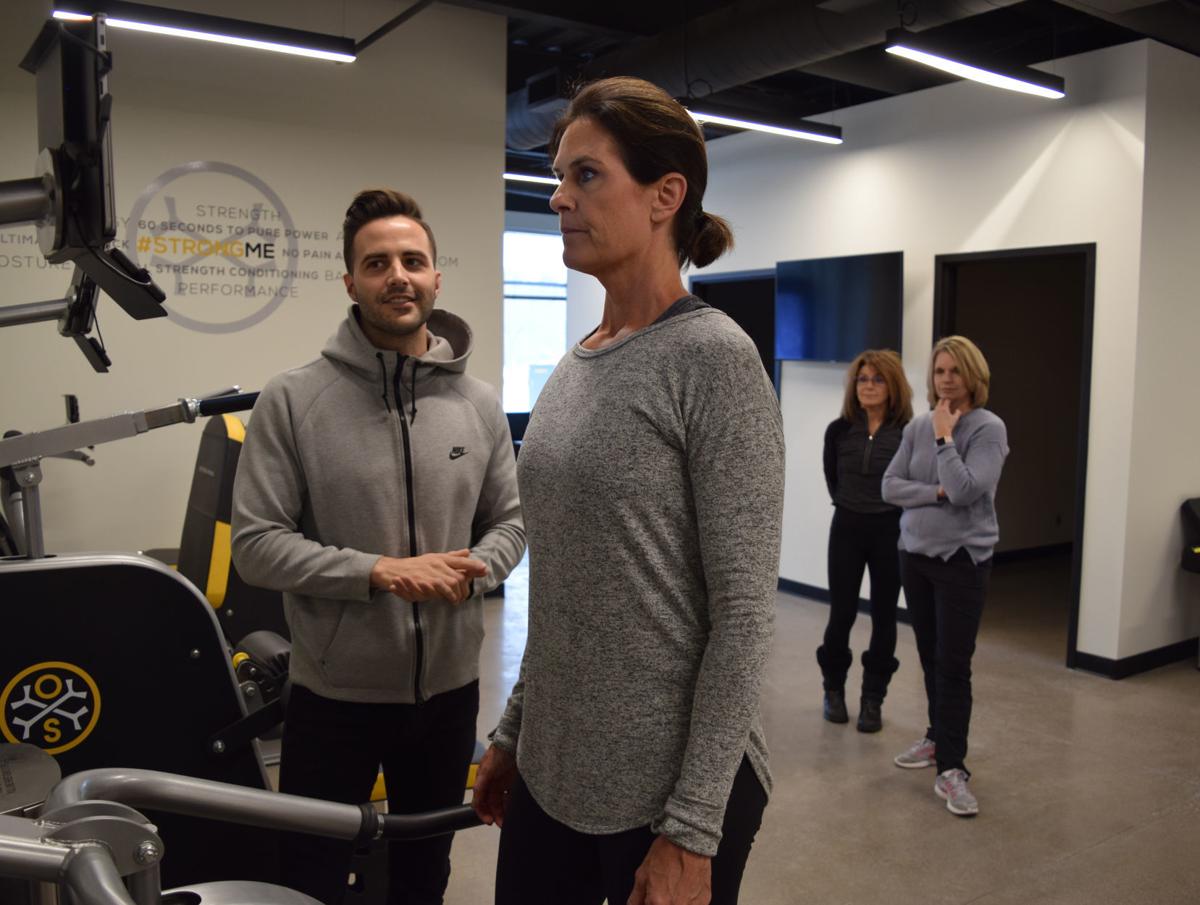 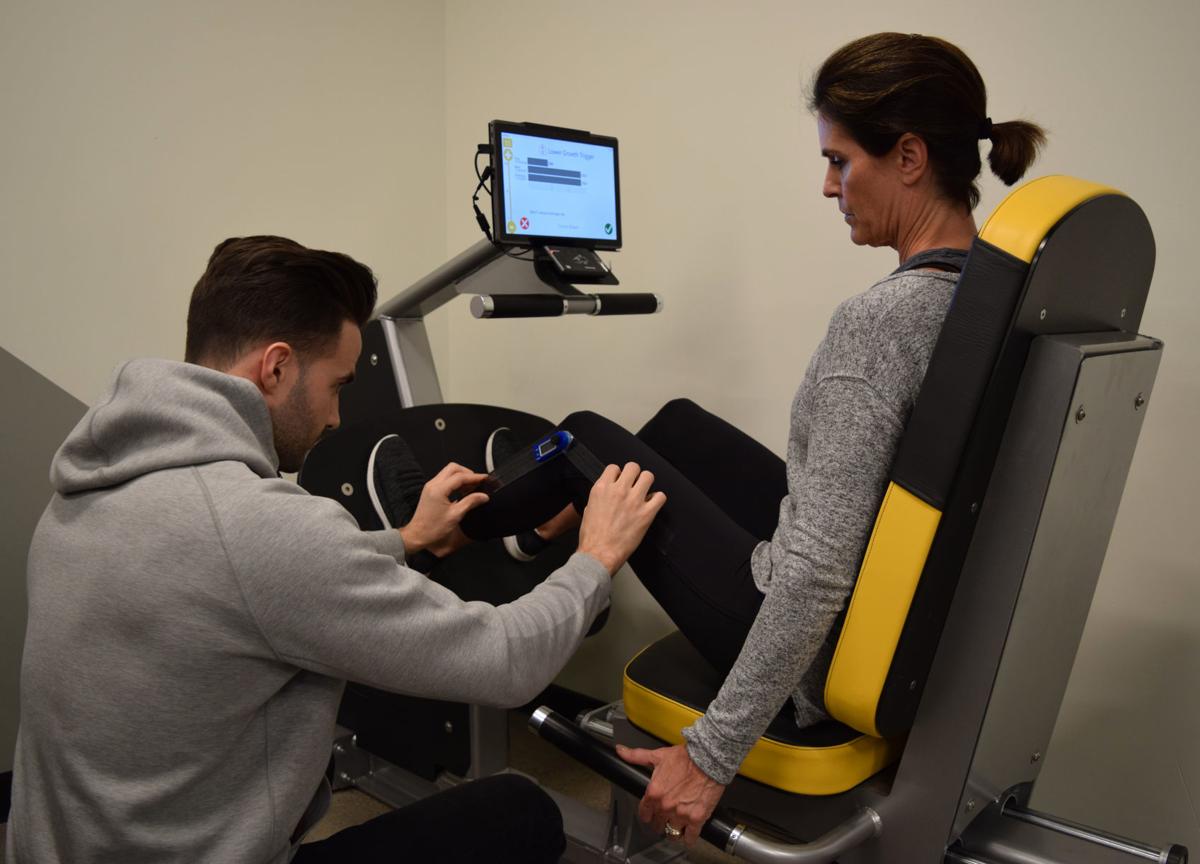 Session coach Ryan Dayton checks coach Donna Brown’s alignment before she begins the session. Session coaches stand by to ensure the safety of the users and provide encouragement. 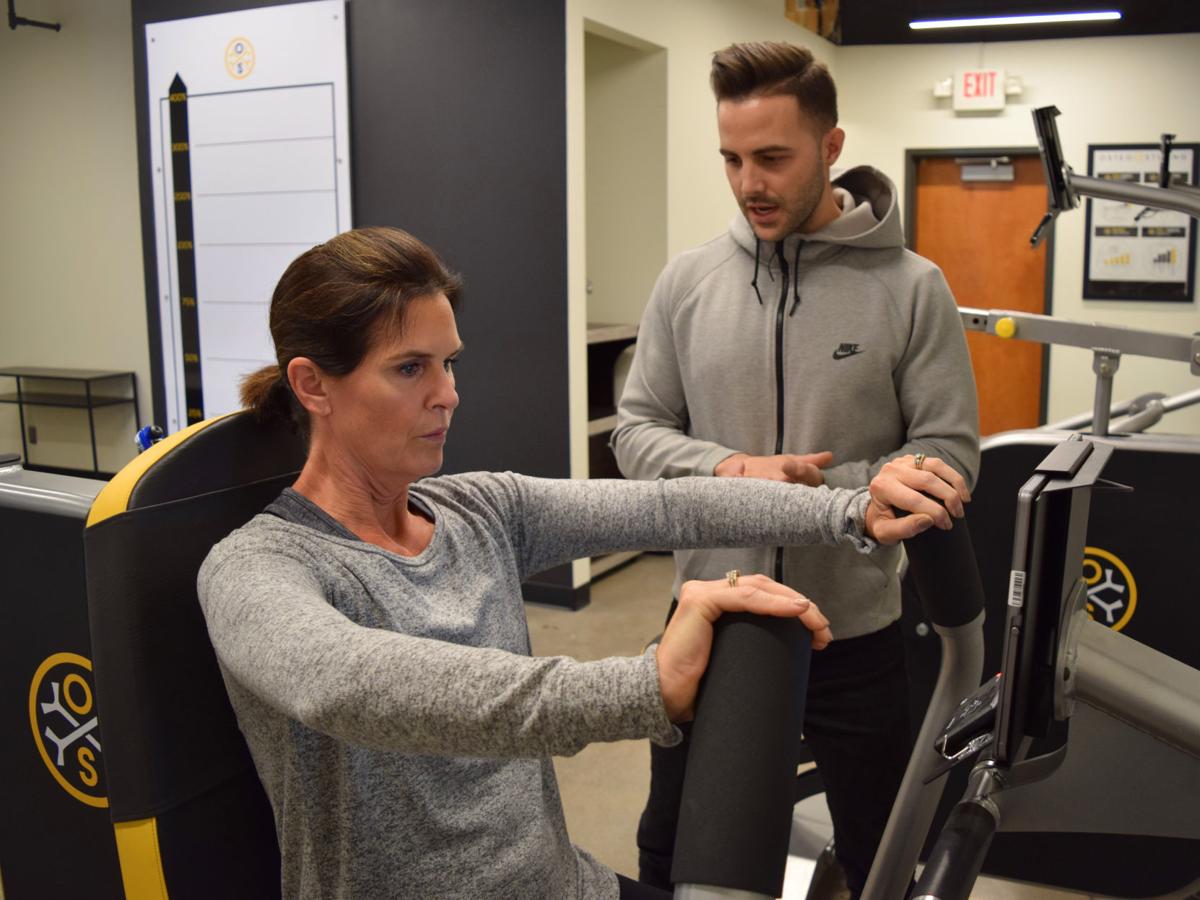 Coach Donna Brown exerts pressure on the machine that targets users’ arms. Each machine has a screen that shows how hard they’re pressing and tracks progress from visit to visit.

Session coach Ryan Dayton checks coach Donna Brown’s alignment before she begins the session. Session coaches stand by to ensure the safety of the users and provide encouragement.

Coach Donna Brown exerts pressure on the machine that targets users’ arms. Each machine has a screen that shows how hard they’re pressing and tracks progress from visit to visit.

Minnesota’s first OsteoStrong opened in Eden Prairie this Friday, bringing its wellness strategy that turns away from muscles and sweat to focus on a sturdier target: the skeletal system.

OsteoStrong is a national franchise with several European locations that aims to use four machines to strengthen the skeletal system, reducing joint pain and increasing athletic output.

Julie Eischens is a veteran business owner who, in opening the state’s first OsteoStrong center, has pivoted from beauty to wellness. She founded Future Concepts Studio + Spa in 1993 and worked as a manager and stylist there for 25 years before changing her focus to skeletal health in September, when she began the process of opening the Eden Prairie OsteoStrong.

“I’ve always loved making people feel good,” Eischens said. With OsteoStrong, her goal is to help clients “in an even bigger way.”

OsteoStrong’s core service is surprisingly quick. After a minute standing on a vibrating table, a coach guides the user through the four machines that put pressure on a different part of the skeletal system. Users push or press on the machines to put pressure on their joints in multiples of their body weight, which session coach Ryan Dayton said triggers osteogenesis, or bone growth.

Users spend barely a minute on each machine and can go through a session in street clothes (although high heels and skirts aren’t allowed on the equipment). Session coaches guide the users through the machines by coaching them on breathing and posture. During a final minute on the vibrating table, they lead the user through some brief balancing exercises, which ends the session.

Dayton, a former personal trainer, said users should limit sessions to once a week to prevent unnecessary stress on the skeleton. Unlike exercise, which tears apart muscles in order to rebuild them stronger, bone mass growth is an additive process, Dayton said.

“We’re not breaking anything down,” he explained.

Jaclyn Berthiaume is a doctor of physical therapy at TRIA Orthopedic Center in Bloomington and said in an email that recent research has indicated some positive effects of vibrational therapies on bone density.

“Since the treatment is on the newer end of the medical spectrum, it is hard for me to say what the optimal ‘dosage’ is for this type of treatment,” she wrote. “As a physical therapist, I would also suggest that balance training and overall muscular strengthening are also part of a person’s regimen for improving overall health and fitness.”

Physical therapists recommend weight-bearing activities, such as walking, jumping and running, Berthiaume added: “Bones respond positively to healthy stresses we cause during these activities. Regular physical activity is one of the best things you can do for your bones.”

Donna Brown and Susan Minnich are OsteoStrong’s other session coaches. They said Eischens was a significant part of why they came to work at OsteoStrong, both “wanting to be around her energy,” Brown said.

Dayton trained to be a session coach at OsteoStrong’s headquarters in Albuquerque, New Mexico, and sought out an OsteoStrong location when he moved to the Twin Cities area. Dayton, Minnich and Brown all said they experienced less joint pain and more energy after using OsteoStrong’s machines and said the quick sessions are unlike other fitness routines.

“You’re not sore or anything afterwards,” Minnich said. “Nothing really compares to it.”

Other services that Eden Prairie’s OsteoStrong will provide are access to Cocoon Wellness Pods, which are individual sauna and massage pods, and pulsed electromagnetic field therapy mats, which run electrical currents through the user’s body to treat anxiety and insomnia, Eischens said. She’s also pursuing partnerships with other local wellness and fitness centers.

OsteoStrong Prairie Center is located at 8345 Crystal View Road, Suite 100, in Eden Prairie. It opened Friday, March 1, and will have an opening party on March 26 from 4-6 p.m.