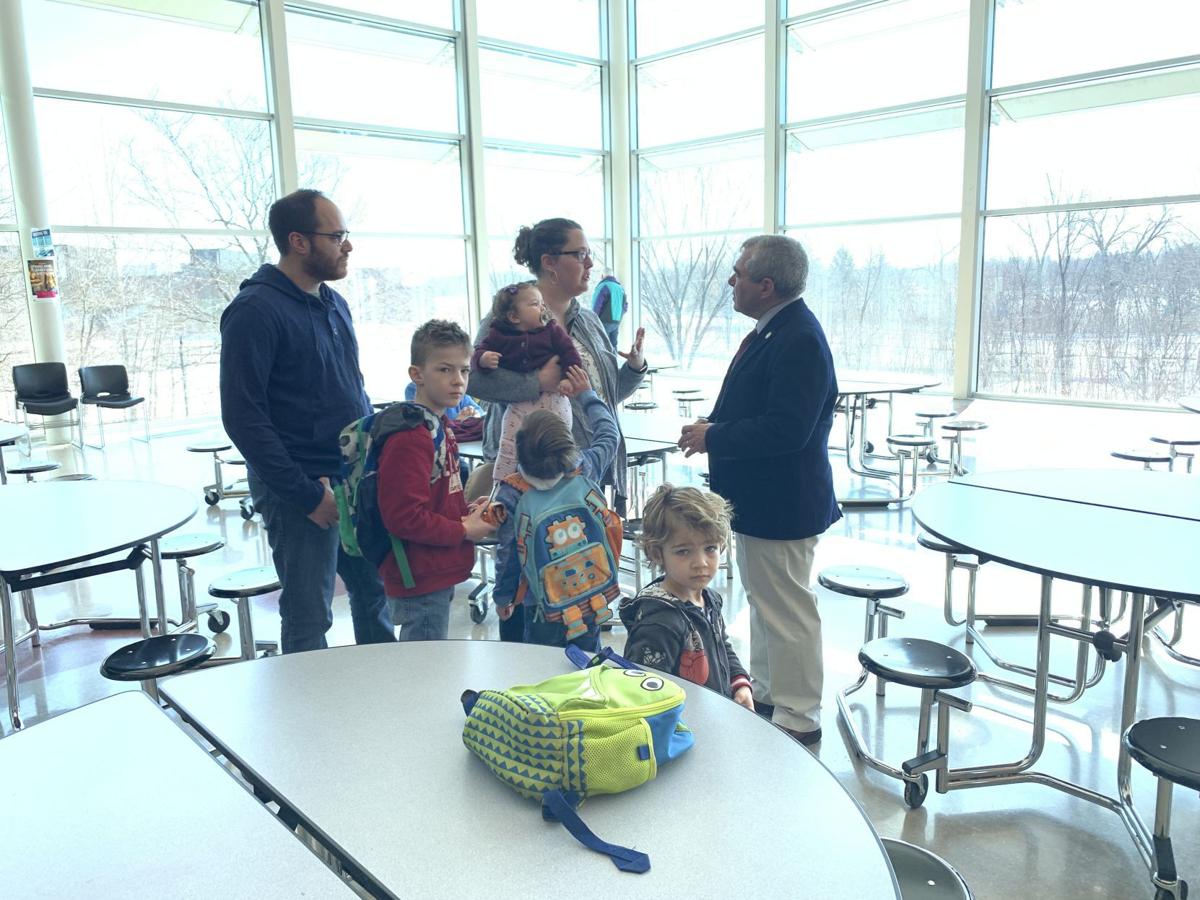 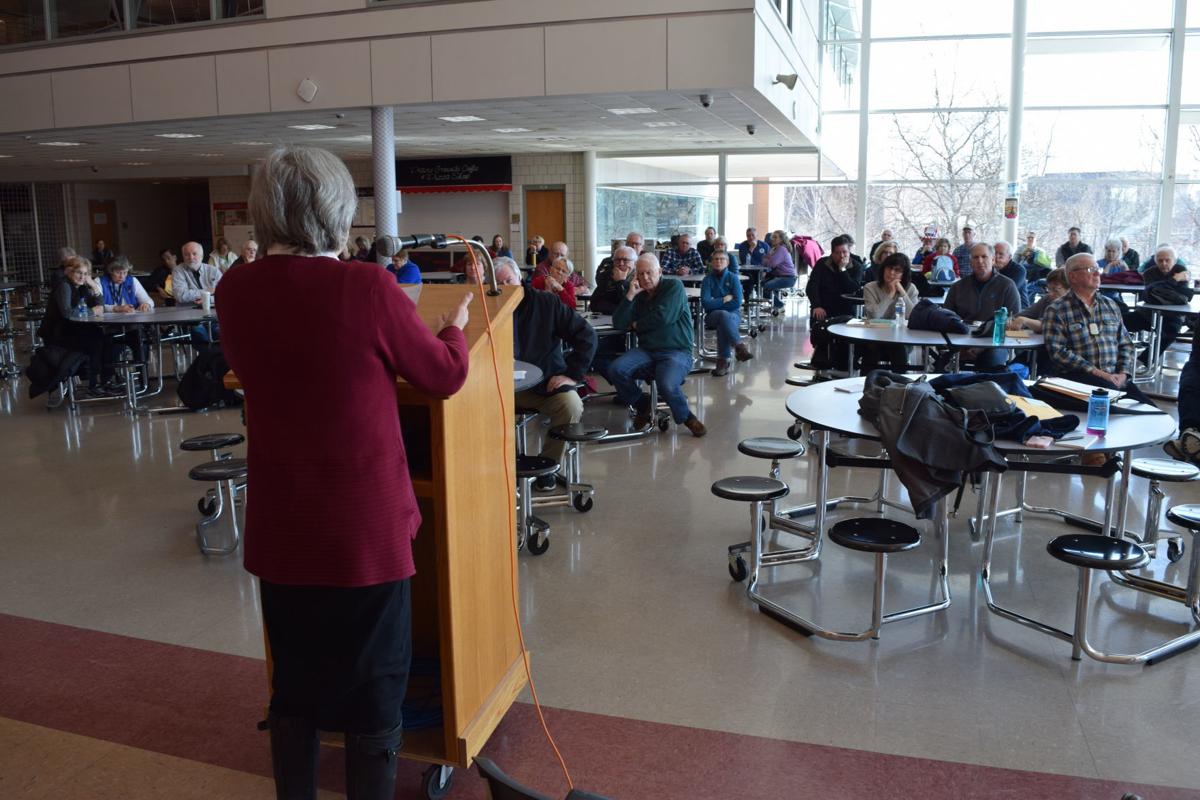 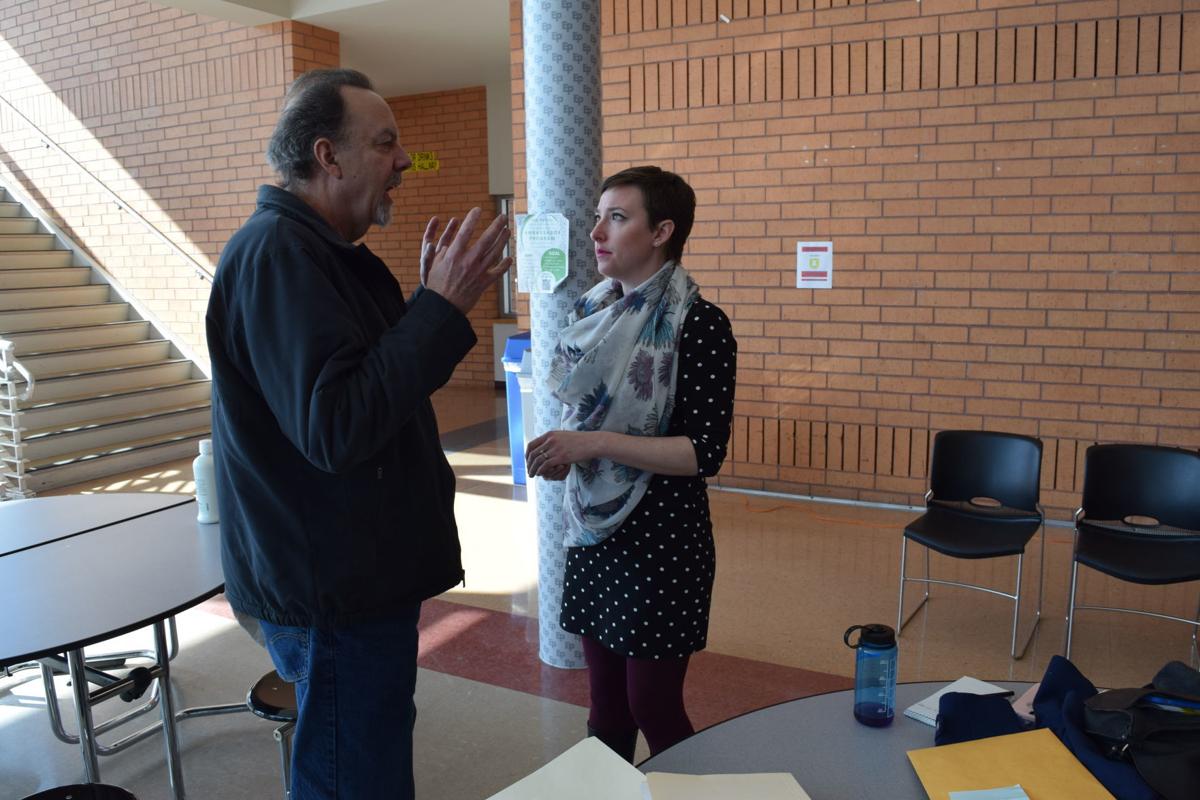 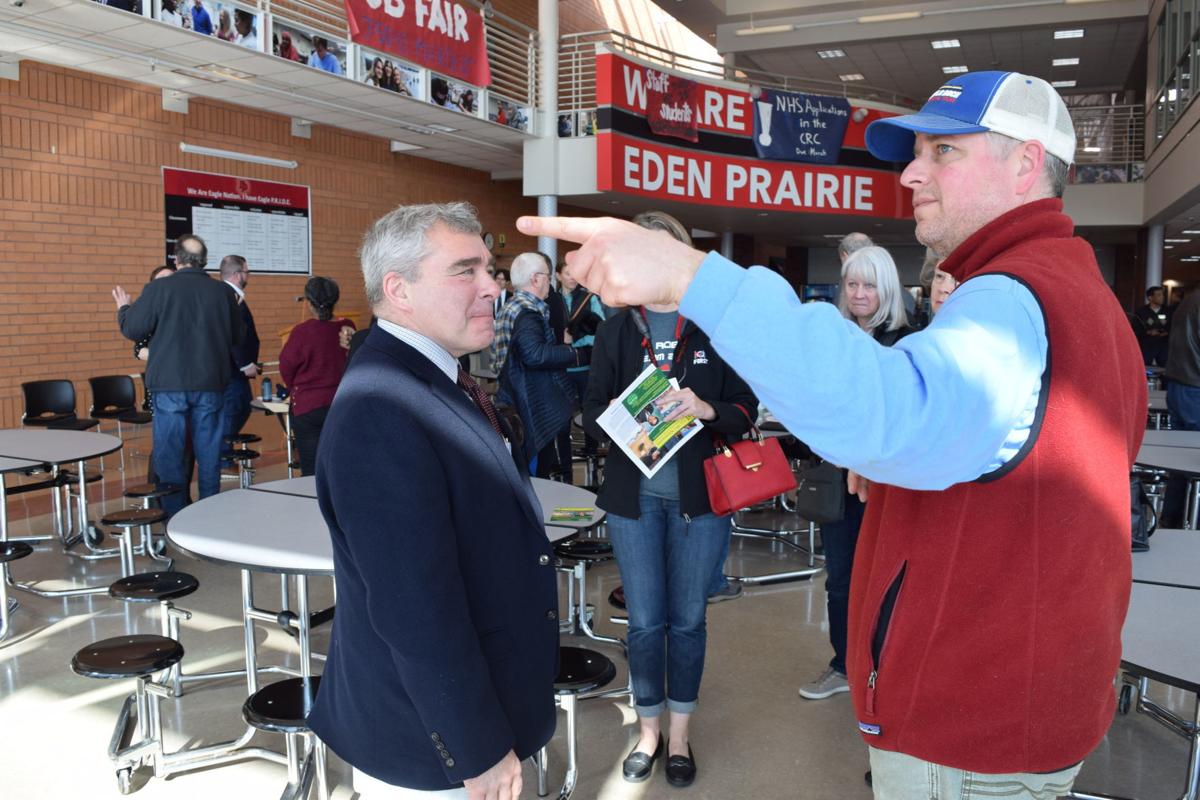 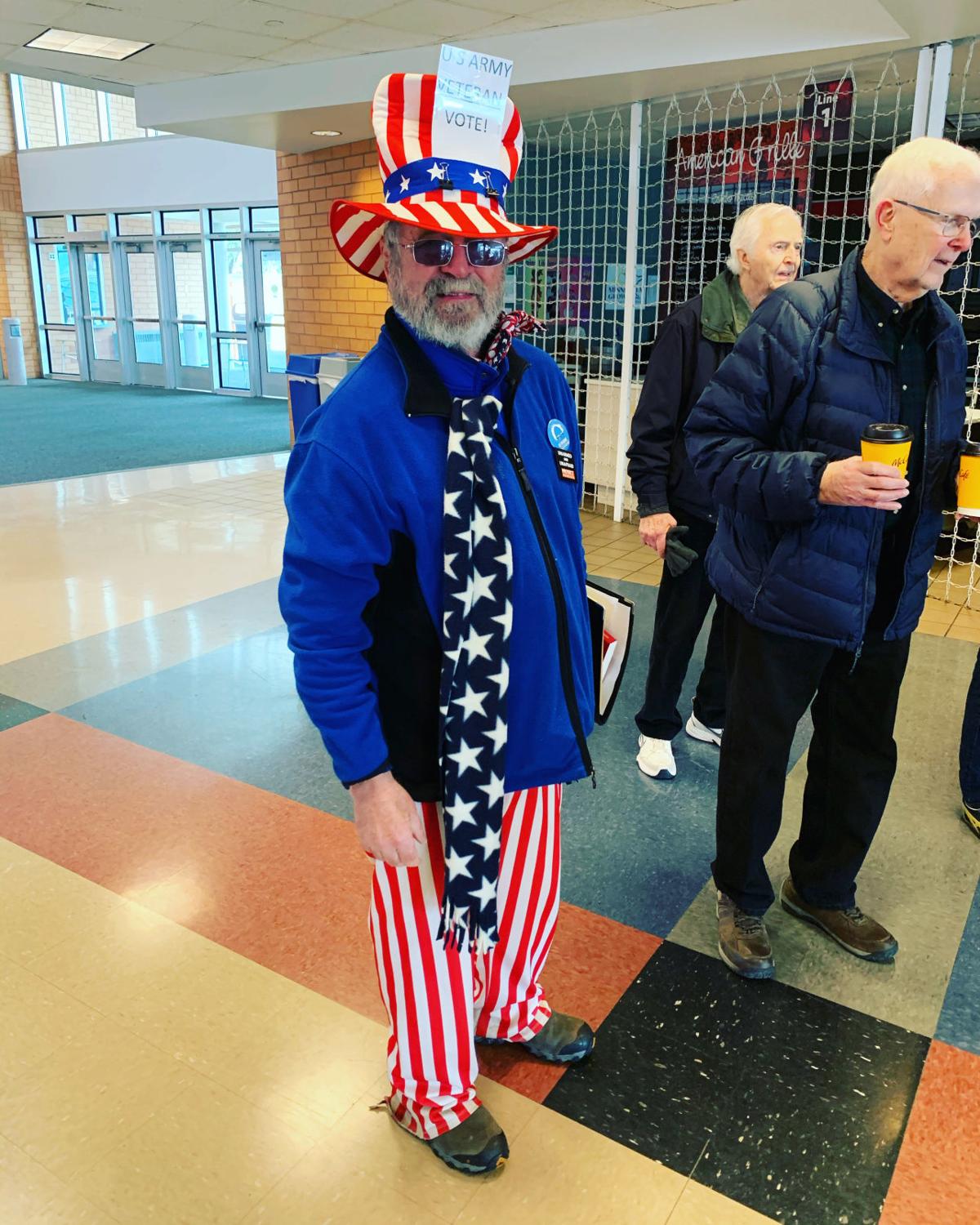 Sometimes, politics can seem like an abstract concept, far from the realities of everyday life. But at a Feb. 29 town hall with Eden Prairie’s trio of state representatives, voters’ questions to their legislators touched on urgent topics, from insulin affordability and COVID-19 to how Minnesota will be represented in Congress after the 2020 Census.

The event drew people like Clarence Richard, of Minnetonka, a town hall regular who arrived dressed head-to-toe in U.S. flags; as well as newcomers, like Adam Butcher, of Eden Prairie, a first-timer who brought his four children to the event in the hopes of learning more about local legislation. He and his small crew posed for a picture with Cwodzinski after chatting as the event wound to a close.

“To me, this is democracy as perfection,” Cwodzinski told the crowd at the end of the event.

Attendees wrote questions on note cards and a staff member gave them to the legislators to answer one by one. Here are the main topics, and where Eden Prairie’s legislators stand:

COVID-19, also called coronavirus, was top-of-mind for the crowd and legislators.

“Maybe there’s a time when we shouldn’t come together like this, but not now,” Pryor said as she opened the meeting. She tied the viral outbreak, which had sickened around 90 people in the U.S. as of March 2, according to the Centers for Disease Control and Prevention, to public health policy like paid sick leave.

“We have to make sure if people are sick, they can afford to stay home and get better,” Pryor stated.

All three legislators noted they had countless conversations about access to insulin. A bill that would grant emergency access to the drug failed to pass in 2019, but the state House of Representatives has fast-tracked a new bill through committee already, Pryor said.

“I don’t want another kid to die,” Cwodzinski added.

On the somber note of youth health, Cwodzinski also addressed the furor around vaping and e-cigarettes, calling both the scale of the problem and the profits that e-cigarette companies are making “extraordinary.” The Legislature may explore a ban on flavored vaping pods that are targeted at teenagers, he said.

Pryor made it clear that a bill to change how voter information is shared with political parties wouldn’t take effect before the March 3 primary. A version of the bill, which would prevent Minnesota’s major political parties from learning which party a voter registered with in a primary, passed in the House (and both Pryor and Kotyza-Witthuhn voted for it, they said) but a parallel version is stuck in the Senate. The House is controlled by the DFL party, while Republicans have a majority in the Senate.

“Here’s the part of the event when they both look at me and say, ‘But in the Senate,’” Cwodzinski joked.

Kotyza-Witthuhn is interested in making voter registration easier by having a process to automatically update a person’s registration if they register a change of address at the Department of Vehicle Services, she said.

Counting those voters is also a hot topic as the 2020 U.S. Census approaches. Pryor urged the crowd to “fill out the Census and fill it out as quickly as possible” when it becomes available, and to remember to count newborn babies, a group that’s often under-counted.

If the Census shows that Minnesota’s population has stalled or not grown as quickly as other states, it may lose a representative in the U.S. House when the results are applied to Congressional representation, Cwodzinski warned; that nearly happened 10 years ago, when Minnesota was pitted against Arizona for a seat in the U.S. House.

Minnesota has the worst racial achievement gap in the country, and the Legislature is eager to do something to fix that, Pryor said, calling it “shameful.”

Talk of an amendment to the state constitution has been circulating the state Capitol, but fixing Minnesota’s schools will take more than changing the wording that describes what kind of education the state’s students are entitled to, Cwodzinski said.

“The good news is, we’re discussing the opportunity gap,” he said.

Kotyza-Witthuhn addressed a question about state-mandated comprehensive sex education, which she said would be “science-based, age-appropriate” and able to be tailored to each individual school district. Parents could also opt-out, she added, and she cautioned against assuming what a “comprehensive” education entails.

“Age appropriate doesn’t mean teaching kindergartners how to have sex,” she said.

In the last few moments at the microphone, the legislators addressed a smattering of questions that didn’t quite fit into any one category, like a bill that would establish each parent in a divorce as an equal caregiver to any children involved, which aims to solve courts’ tendencies to give custody to a mother in such situations.

“I heard good stuff,” Richard said, still wearing his stars-and-stripes top hat. Still, his question about political polarization in the national Democratic party hadn’t been read aloud, and he lingered to bring up the issue with the legislators. “If we can’t get rid of the polarization, we’re stuck,” he explained.

Minnesota is inching toward spring, and the legislature is picking up the pace as my colleagues and I are working to hear bills and get our wo…