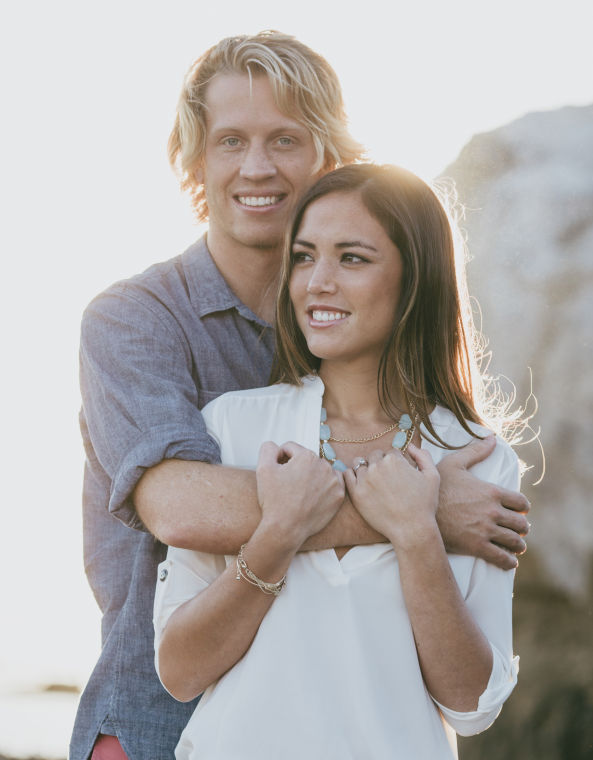 John Erck and Jessica Hoel are engaged to be married this fall in California. They returned to compete during Season 24 of “The Amazing Race” on CBS.

Jessica Hoel and John Erck (far left), are pictured with the other cast members of “The Amazing Race.” The engaged couple returns in Season 24 to compete a second time. 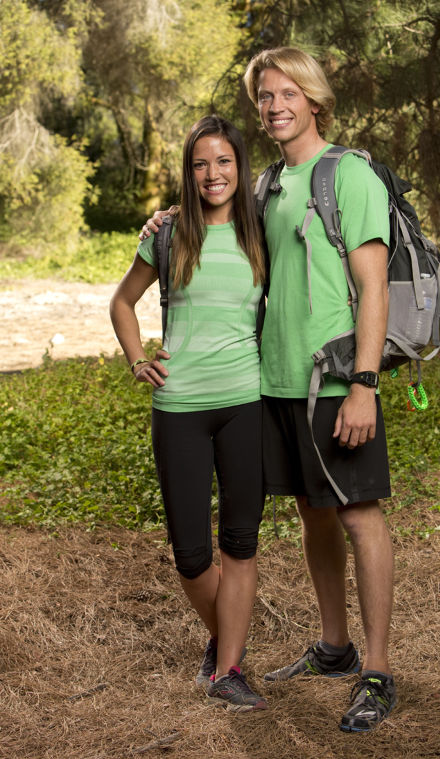 Engaged couple Jessica Hoel and John Erck are appearing on the new season of “The Amazing Race,” premiering Sunday, Feb. 23, on CBS.

John Erck and Jessica Hoel are engaged to be married this fall in California. They returned to compete during Season 24 of “The Amazing Race” on CBS.

Jessica Hoel and John Erck (far left), are pictured with the other cast members of “The Amazing Race.” The engaged couple returns in Season 24 to compete a second time.

Engaged couple Jessica Hoel and John Erck are appearing on the new season of “The Amazing Race,” premiering Sunday, Feb. 23, on CBS.

How many couples get to compete for $1 million on national television and get invited to try it a second time?

“We’re excited about it. We had fun the first time around and because of that we wanted to do it again. When we had the opportunity to do it a second time, it was a no-brainer,” Erck said.

According to CBS, “The Amazing Race,” hosted by Phil Keoghan, features 11 teams of two that race against each other around the world to win $1 million. During the approximate 25-day race, the teams have to finish mental and physical challenges and only learn their next destination after completing each challenge. The teams who are farthest behind are gradually eliminated. The first team to finish wins the money. The latest season was filmed this fall.

Hoel and Erck were dating when they competed for the first time on Season 22 and finished in ninth place. This time, they compete as an engaged couple.

Hoel grew up in Eden Prairie and is a 2004 graduate of Minnetonka High School. She has fond memories of running on the city’s trail system, cross country skiing and fishing with her father. She also frequented the Eden Prairie Community Center.

The pair met while they were doing an internship at Cargill in Wayzata – where Erck was in finance and Hoel was in human resources. They first saw each other during a large internship forum with a few hundred interns.

“Jess really caught my eye. There was something about her that kind of radiated. I definitely took note of her,” he recalled.

Erck saw Hoel had hit it off with a group of girls sitting at her table and that a few of them were lined up to get her phone number. He got in line behind them and told her it appeared she was giving out her number and he would like it too, he said.

“That first time we talked on the phone … we talked for three hours and it was like five minutes,” he said.

Hoel said she hadn’t planned on dating seriously but she had noticed Erck was different from other guys. He was outgoing, seemed adventurous and interested in being an entrepreneur, she said.

Erck learned of Hoel’s love of running and invited her for a run for one of their first dates, though it’s not his preferred hobby.

“It was really hilarious, he didn’t make it very far,” she said. “I knew he was trying really hard to figure out how to hang out with me.”

They dated for about five years before they got engaged in July 2013. Erck proposed during a hike on the top of a mountain at Sequoia National Park in California.

“It was a really strenuous hike and super beautiful,” Hoel recalled.

The couple relocated to Orange County, Calif., two years ago. Hoel works for an ingredient company and Erck is an iOS developer for iPhone and iPad apps. They’re planning to be married this fall in southern California.

Hoel and Erck landed on the show the first time after their friends prompted them to sign up. Both said Bora Bora was their favorite destination during their first time on the show.

The couple was known in Season 22 for being eliminated while in possession of an “express pass.” Hoel explained the pass allows a team to skip a challenge. Erck said they decided at the time they didn’t need to use it. It was a difficult decision because teams don’t know who is behind them or ahead of them during the race.

“Our friends and family, we joke about it from time to time,” Erck said. “We get a chance to redeem ourselves.”

Hoel said they felt more prepared going into the second race because they knew what to expect. They didn’t believe their experience gave them an advantage because other cast members were also returning from previous seasons.

“We really didn’t have an upper hand but I think it helped us individually as a team,” she said.

Did growing up in Minnesota prepare them for the competition?

“Yes. I feel like anyone who can endure the -40 temperatures in Minnesota can do anything,” Hoel said.

Erck encouraged viewers to check out the new season.

“Get excited; round two is fun,” he said.

For more on "The Amazing Race," visit