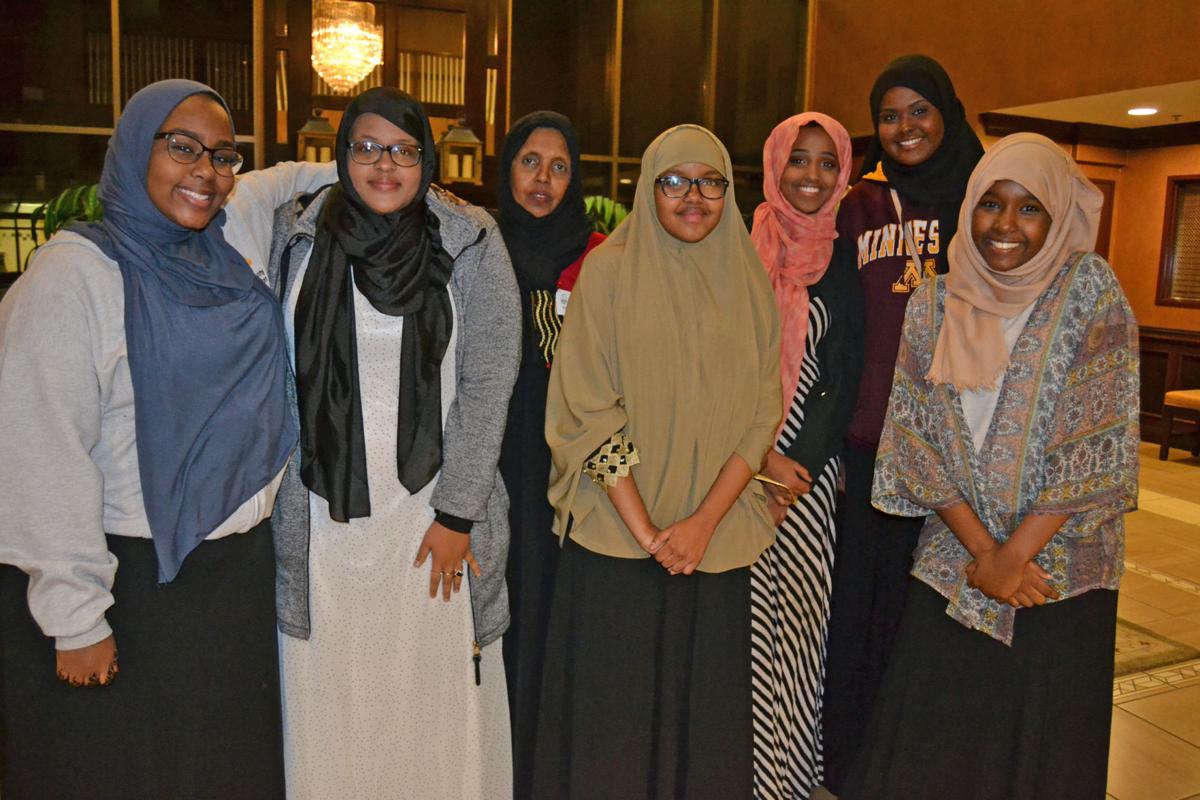 Members of the Girl Up Club in Eden Prairie and one of their advisers pose for a photo. Pictured, left to right are Munira Behr, Laki Omar, Farrah Osman, Deqa Nur, Asiya Gelle, Saodo Abdirahman and Iqri Salad. 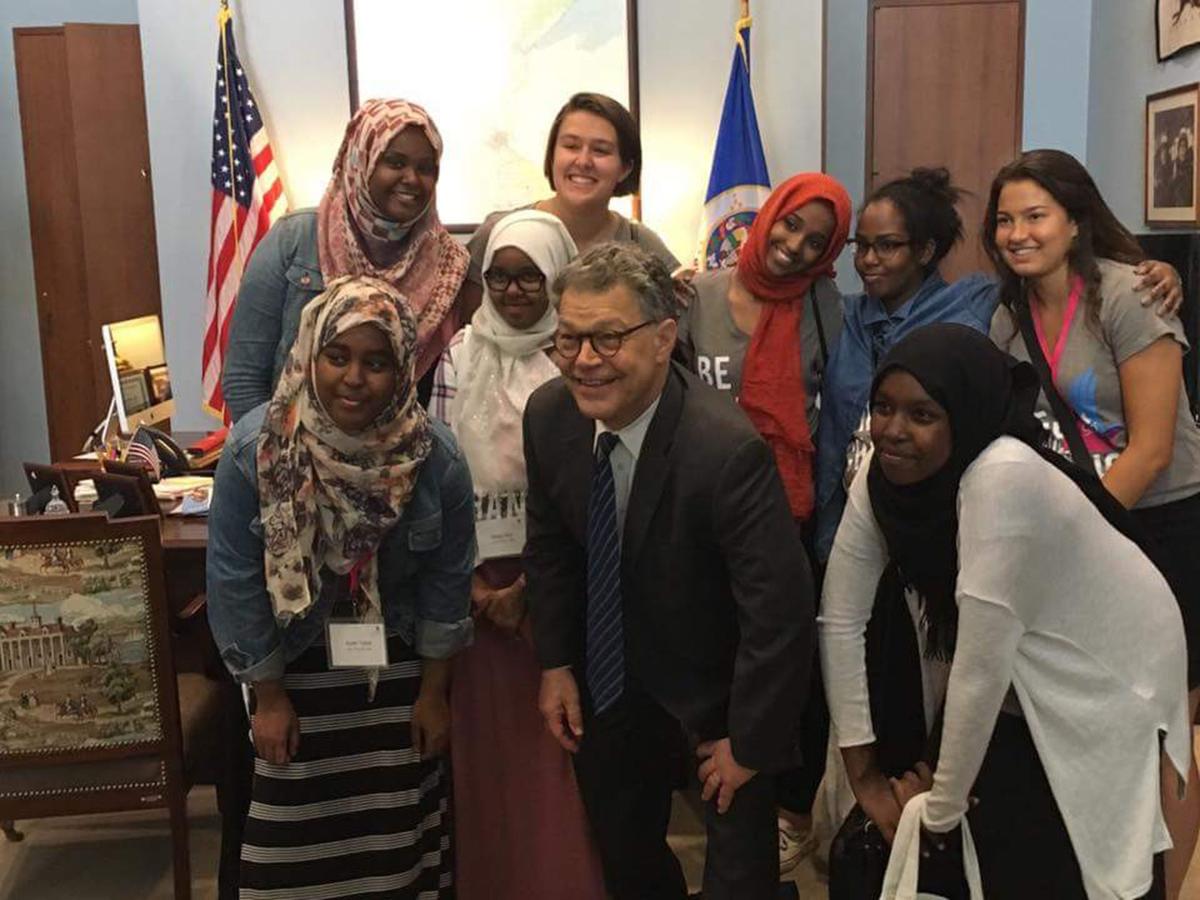 Members of the Girl Up Club in Eden Prairie and one of their advisers pose for a photo. Pictured, left to right are Munira Behr, Laki Omar, Farrah Osman, Deqa Nur, Asiya Gelle, Saodo Abdirahman and Iqri Salad.

Eden Prairie’s Iqri Salad said she’s come to realize how lucky she is.

“I have a free education. I live in a stable household. I get food on my table,” she said.

Salad, an eighth-grader at Central Middle School, is one of six middle school, high school and college-aged Somali girls who started a Girl Up Club. They’ve been meeting in Eden Prairie to help other girls abroad who haven’t had the same advantages they have.

The club began meeting after the group attended a Girl Up Leadership Summit from July 11 to 13 in Washington, D.C.

Girl Up, started in 2010, is a campaign of the United Nations Foundation for adolescent girls to support “the empowerment of girls everywhere.” The campaign has funded United Nations programs promoting health, safety education and leadership of girls in developing countries, according to Girl Up’s website.

“Our youth leaders, representing more than 1,400 Girl Up Clubs in 85 countries, stand up, speak up and rise up to support the hardest to reach girls living in places where it is hardest to be a girl,” the site said.

Ahmed Hassan, project coordinator, with St. Paul-based nonprofit Mothers Tutoring Academy, which offers tutoring services to K-12 students, said the concept of getting a Girl Up Club in the Eden Prairie area began as an outreach effort of Mothers Tutoring Academy. Community members helped support the girls’ cost to attend the leadership summit.

Farrah Osman, an Eden Prairie resident, is chair of the organization’s board and said she reached out to families she knew in the Somali community about their interest in becoming involved with Girl Up. Mothers Tutoring Academy has also sponsored students to participate in the Model United Nations conference.

According to the Girl Up website, girls from around the world convened for the fifth annual three-day summit to participate in leadership training, learn from influential speakers and engage in skills-based workshops. The summit is open to girls and young women ages 12 to 22. Osman said during their trip they also visited Minnesota U.S. Reps. Keith Ellison and Erik Paulsen, Sen. Al Franken and staff from Sen. Amy Klobuchar’s office.

Omar wanted to attend because the program focuses on helping girls from third world countries and how other girls can work to help them out. “I think all the problems Girl Up tackles, I think they’re all important. I think it’s important as a female in this country to learn about the struggles of girls in other countries,” she said.

Gelle said she liked the idea of the younger generation learning from other women about what they have gone through and what it took for them to be successful.

Nur was interested in going because she wanted to learn more about equality for girls and making a difference, she said.

“Not only was it about education and being safe and having a fundraiser, but to stand up for each other and change the world,” she said.

Salad said Osman initially introduced the idea of starting a club to them and they began meeting soon after they came back from the leadership summit.

“We took it and ran with it. We thought it would be a good idea to give back to where we came from and help women who aren’t as lucky as we are,” Salad explained.

According to Salad, the club’s focus is to raise money to support Girl Up educational programs for Somali girls abroad. They will do this by speaking to groups in the Somali community and hopefully other community groups in the future.

The club’s members have all taken on different jobs. Nur has been named a leader who delegates what needs to be done during meetings, and collects the money that’s raised. Salad is the speaker who explains the club’s mission and what donations will support during fundraisers. Omar is acting as a club adviser and will help them with research. Abdirahman assists with organizing events and Gelle plans to help with speaking for the club as well. Their first fundraising event was planned for Nov. 20 in Minneapolis.

Behr said she’s planning to start a club at her own high school as an extension of the Eden Prairie group and her friends there have expressed interest in joining.

Over the last few months, the Eden Prairie group has been meeting in Lincoln Parc office suites, 12100 Singletree Lane, twice a week from 6 to 8 p.m. Saturdays and 5 to 7 p.m. Sundays. Salad said they usually discuss the activities they’re going to do, and they’ve been working on setting up goals. They also plan to set up a website about the club.

“I like that we collaborate and come up with these new ideas to help our community. We’re luckier than most people are,” Abdirahman said.

Omar said what’s she’s taken away from the club is seeing how the younger girls are motivated to join to help each other.

“Instead of putting each other down, they can positively bring each other up and build a community to help other females that are of need,” she said.

Behr said she didn’t know this group of girls before the club. “It’s great to meet new people and to be able to travel with them and ... hear other stories,” she said.

Nur said she likes Girl Up because it says that girls are powerful and girls have limitless potential.

“When they went to the House (of Representatives), people of power were actually willing to listen to youths,” she said. “They were willing to hear their stories and struggles in the communities.”

Salad said they would like to get 10 to 15 girls to be involved in planning the club’s main activities but they want as many girls as possible to join the overall club. The club is open to any girl between the ages of 12 and 22.

For more information about joining or supporting Eden Prairie’s Girl Up Club, contact Ahmed Hassan at ahmed.hassan@mtacenter.org or 651-815-7939 or Farrah Osman at farrah.osman@mtacenter.org.