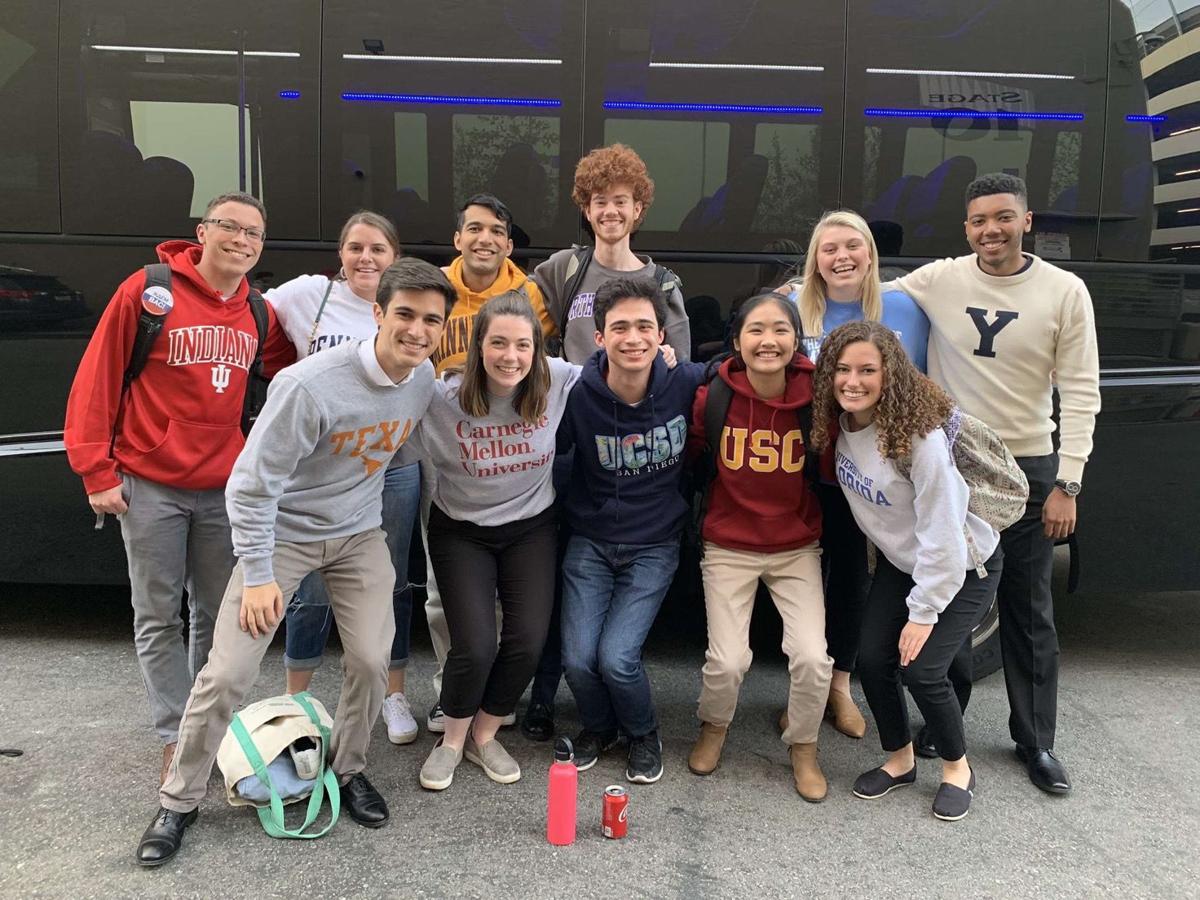 Nibir Sarma, third from the left in the back row, has stayed in touch with his fellow Jeopardy! College Championship by playing bar trivia together over Zoom. 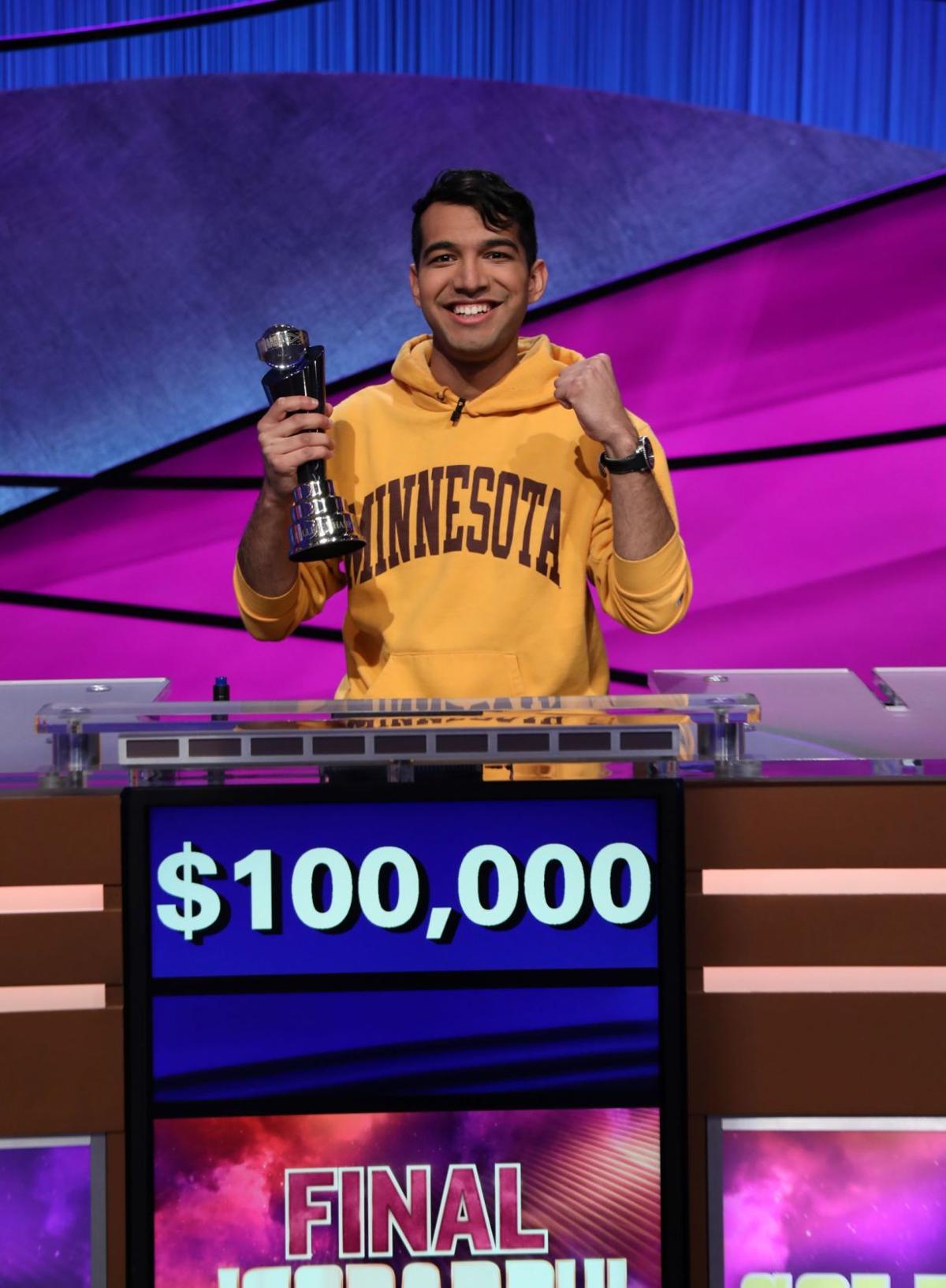 Nibir Sarma, third from the left in the back row, has stayed in touch with his fellow Jeopardy! College Championship by playing bar trivia together over Zoom.

If Nibir Sarma’s neighbors hear the soft strains of a saxophone from his windows in the coming months, they can thank Alex Trebek for the music.

The University of Minnesota sophomore and Eden Prairie High School graduate beat out 15 other college students to win the Jeopardy! College Championship, and $100,000, in the episodes that aired mid-April.

In Sarma’s in-person interview that contestants do before they’re selected for the show, producers ask each person what they’d do with the $100,000 prize. Sarma, after mulling it over, said he’d like to learn to play the sax.

That answer, plus his encyclopedic trivia knowledge, was enough to get him on the classic game show. The episodes were filmed back in February, and for the first episode, Sarma’s group of three was slated to film at the end of the day, after everyone else had gone. He didn’t get many butterflies, Sarma confessed: After hours waiting in the green room, he was “a little too tired to be nervous.”

“I was just looking at that one episode, trying my best not to look too bad on TV,” he added. “I felt like I got better at the game as I played more.”

As he filmed the last episode, Sarma said it dawned on him that he would win well before the show’s final moments, but hearing the words from Jeopardy! host Trebek was the cherry on top. Sarma got to know the affable host a bit during commercial breaks, when Trebek chatted with the audience and contestants alike.

“He’s very much the exact guy you’d imagine from watching the show,” Sarma recalled. “It was great to shake his hand, get that trophy.”

While Sarma knew that he’d won the grand prize back in February, he had to keep mum about his victory until it aired April 17. Since his win aired, he’s received a barrage of messages from fans telling him of their support for him from day one, and he’s gained semi-celebrity status on social media with a flood of new followers.

“It’s definitely a lot different now,” he remarked. “Now I know there’s people all over the country who know me.”

To those who knew Sarma as a young student, it should come as no surprise that he came this far. He first started doing trivia at Central Middle School and competed in both the science bowl and quiz bowl.

Though he didn’t watch Jeopardy! growing up, he was “aware of the show as a staple of American culture,” he said, and sometimes played through old Jeopardy! questions with his quiz team for fun. He didn’t seriously consider trying out for the game show until his first year at the University of Minnesota, when he first took the online test for the Jeopardy! College Championship. When he reapplied in the fall of 2019, he made it to the in-person interview in St. Louis, where the producers asked what he’d do with the $100,000 grand prize.

Now that his stint on Jeopardy! is over (at least until the Tournament of Champions) and he’s attending classes from his Minneapolis apartment, Sarma has been relaxing by practicing his guitar and clarinet or playing video games. He’s also stayed in touch with other 14 College Championship contestants: the students have been meeting weekly over Zoom to do online bar trivia.

As for what’s next − besides learning the saxophone, “it’s mostly up in the air for me at this point,” he said.