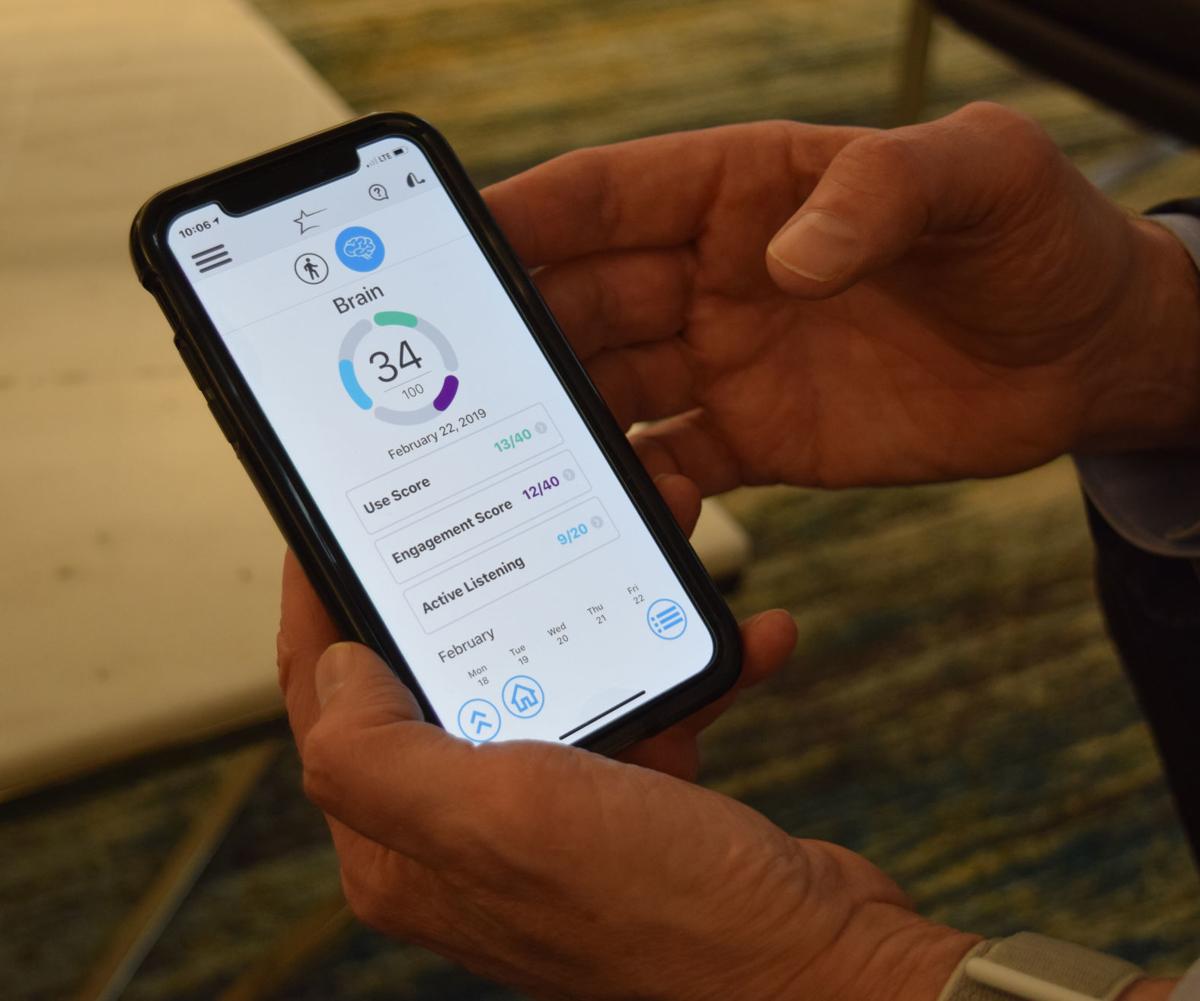 The Starkey hearing aid connects with an app that can track fitness information as well as adjust hearing aid operations. Ideally, hearing aid wearers will become so comfortable with their devices that they forget they’re wearing them, Fabry said. 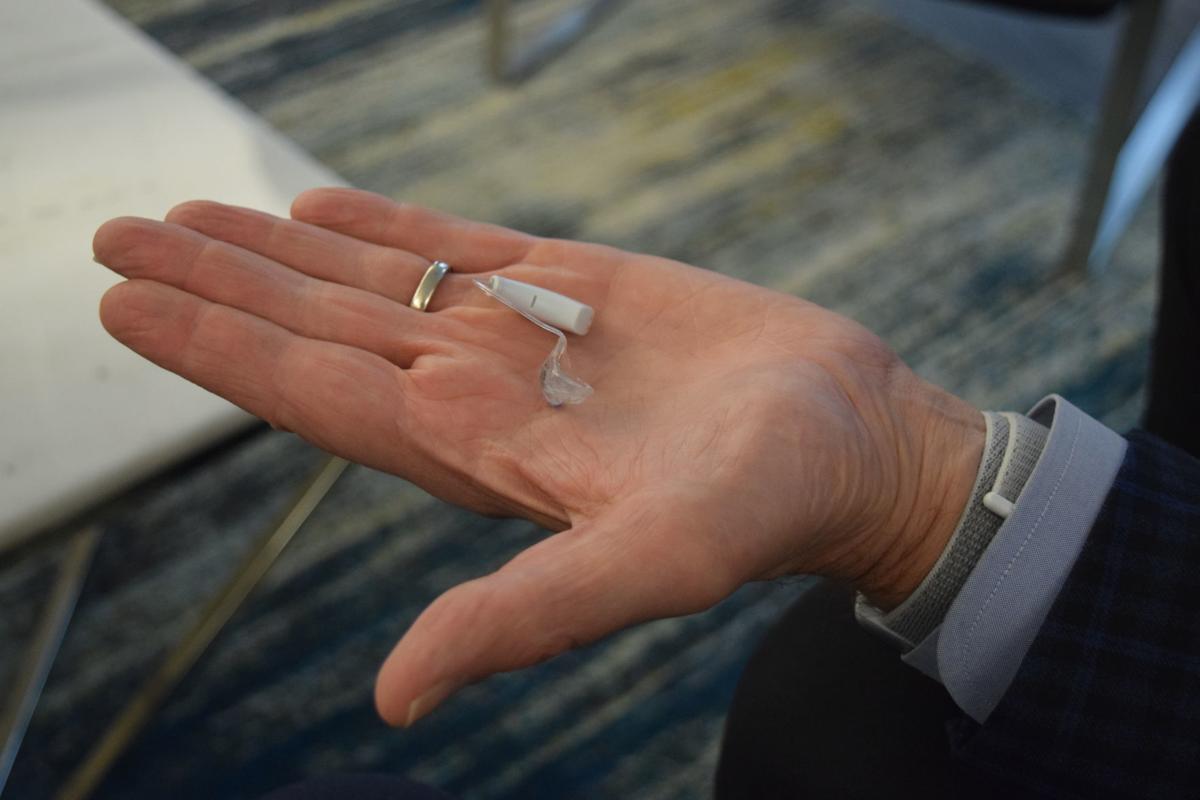 Hearing aid users benefit from the normalization of hearing devices like AirPods and other Bluetooth devices, Fabry said. 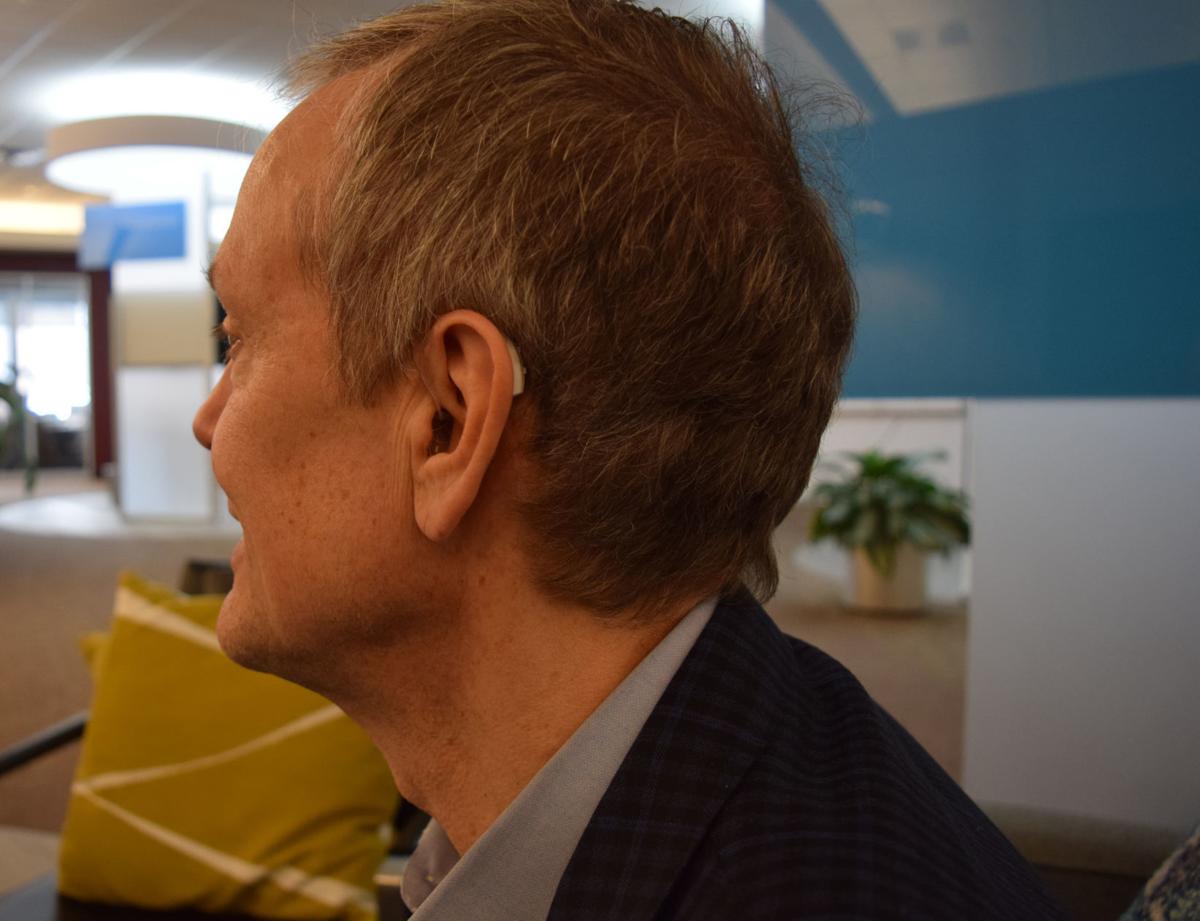 Ideally, hearing aid wearers will become so comfortable with their devices that they forget they’re wearing them, Fabry said.

Dr. David Fabry preferred not to pitch himself to the floor to demonstrate Starkey’s latest hearing aid feature, and he didn’t have to. A few taps on the hearing aid’s mobile app triggered the sequence that would send messages to three trusted contacts if a hearing aid user fell and needed help.

The app is Thrive Hearing, and it pairs with Starkey’s Livio AI hearing aids to bring a host of new wellness features to the world of hearing aids. The device’s fall detection, alerts and virtual assistant launched on Monday, Feb. 25.

Fall detection capabilities had been in the works for 18 months and rely on Livio’s embedded sensors that also track a wearer’s daily step count and pair with a smart speaker or virtual assistant.

The fall detection sequence was developed based on insights from focus groups and generational trends. The app can alert up to three contacts of a user’s fall and sends information about the user’s location to each of the contacts. Focus groups preferred this approach over calling an ambulance, Fabry explained, because some older users prefer to avoid any embarrassment if they have a minor fall and feel they’ve wasted emergency medical responders’ time.

The left and right hearing aids communicate with each other as well to avoid false alarms; if one hearing aid registers a fall by falling out of a user’s ear, the app knows not to trigger a fall alert sequence because the other hearing aid hasn’t sent the same alert.

“Fall detection is the first step on the journey” to greater communication and decision-making about health, Fabry said. Thrive Hearing tracks the number of falls a user experiences, which can help “kindle a conversation” about independence and precautions between a hearing aid user and their doctor. By fostering an open conversation about health, he hopes Livio AI will “prevent that worst-case scenario” of permanent health issues from a fall.

The app has more in common with a fitness tracker than a traditional hearing aid. Physical activity, cardiovascular problems and even diabetes are all indicators of increased risk of hearing loss, so the apps sensors track users’ daily steps and even social engagement to compile daily scores for users’ physical health.

A more insidious effect of hearing loss is social isolation, which is related to cognitive decline, Fabry explained. Livio AI’s answer to that problem is a daily “brain health” score that uses machine learning to track how often a user is in conversation and engaged with people. At this stage, the app only shows its users their daily score and doesn’t nudge them to increase their social engagement, but that update is in the works, Fabry said.

For all its numerous features (the app can translate phrases in 27 languages and send voice-to-text messages from inside the app), the app is designed to be “intuitive” with a basic and advanced mode, Fabry said, since its users are “not necessarily technophiles.”

The growing ubiquity of Apple’s AirPods and other wearable technology has made it less noticeable for a person to go about their day with a device in their ears, and that convergence with hearing aids has helped those who might otherwise not want to use hearing aids.

“The normalization of having something in your ears helps with the stigma,” Fabry said, which helps people “admit that they have hearing loss and do something about it” more quickly.

“The sooner you treat it, the better you’ll be,” he added.

Correction, Feb. 27 at 11:31 a.m.: Heart rate monitoring is not yet available as part of Livio AI's features.