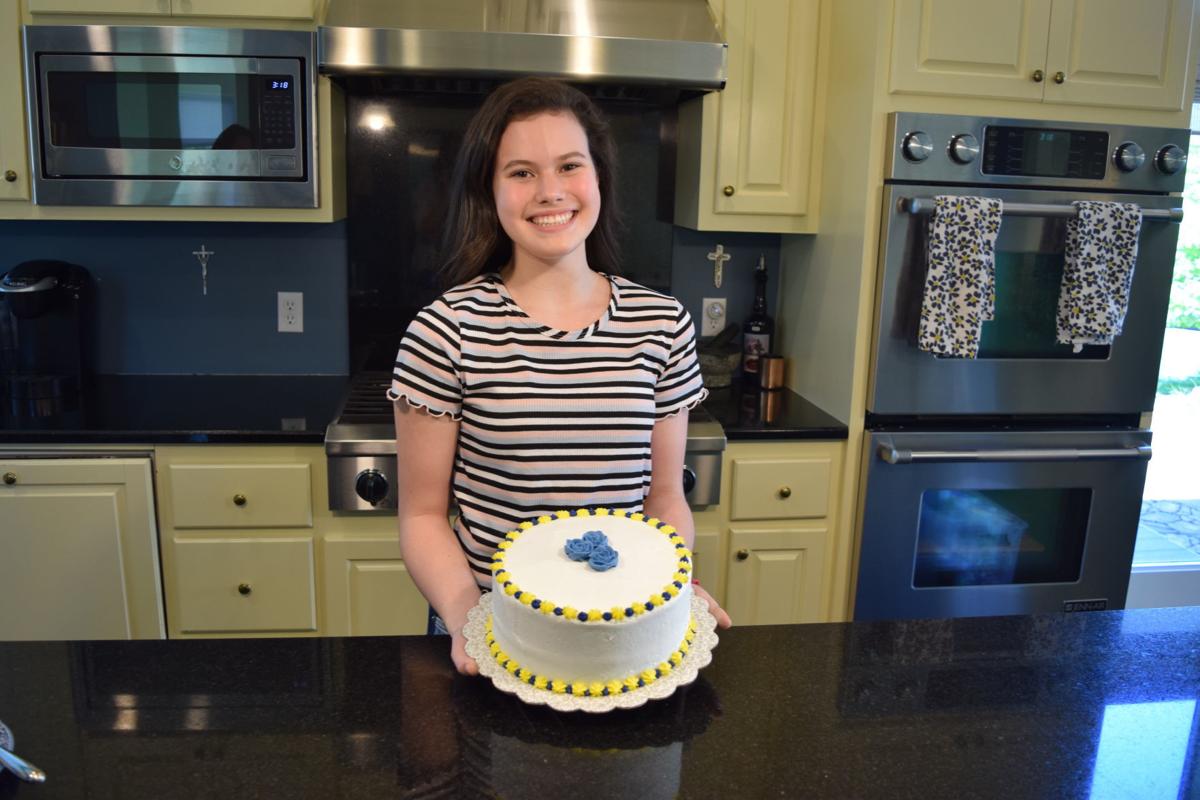 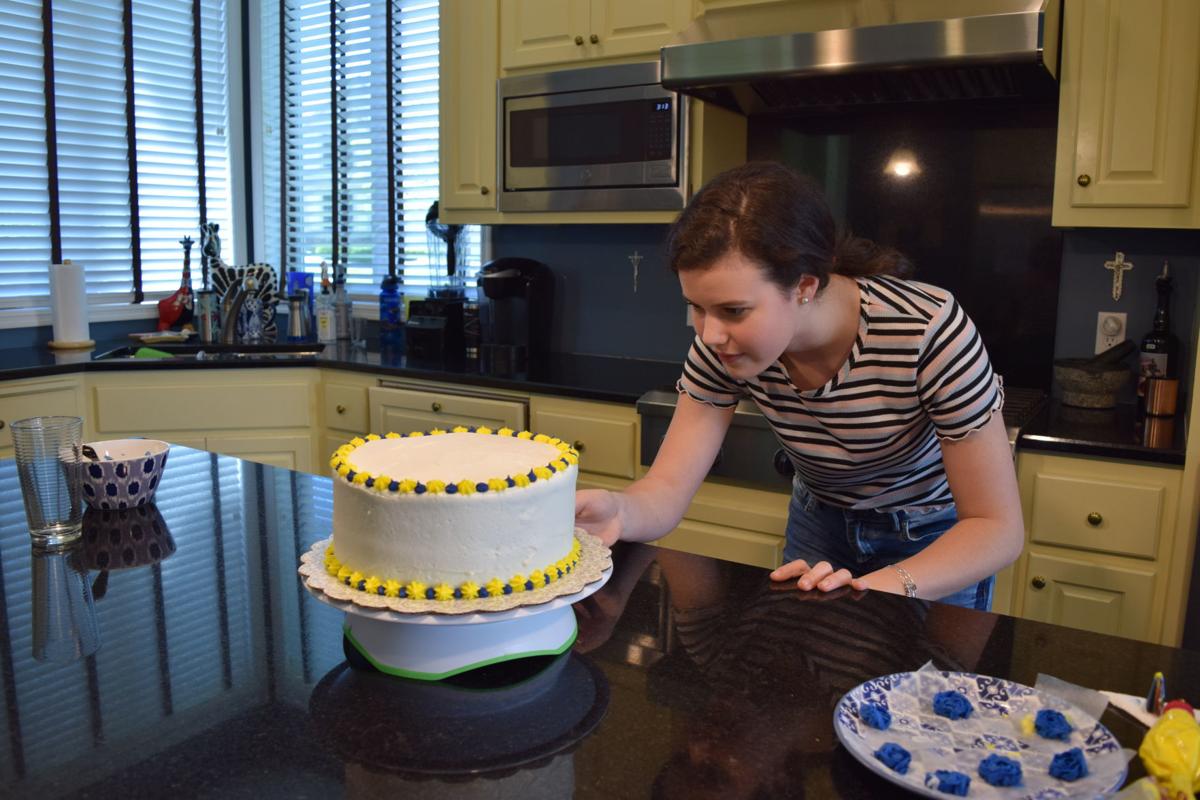 Mary Margaret with a cake she made for a customer’s birthday. Every dollar that a customer pays for a cake goes to one of Cakes for a Cure’s four charities. 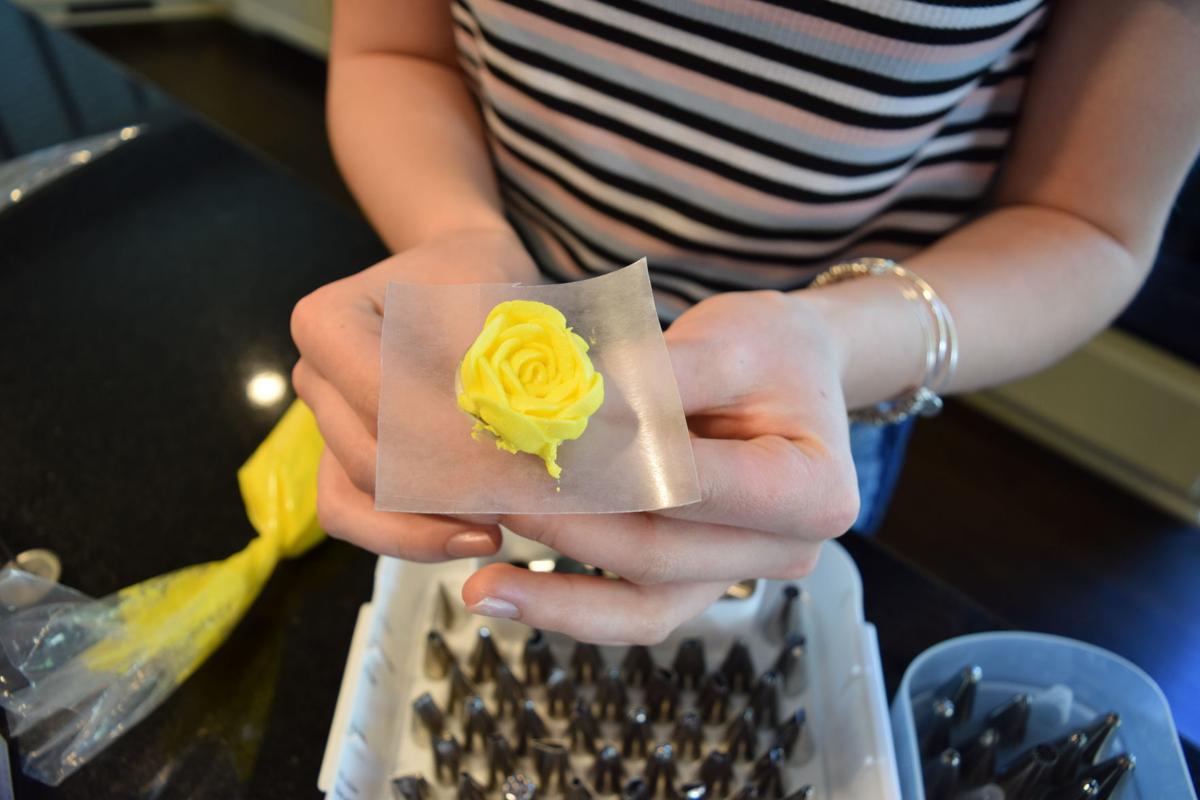 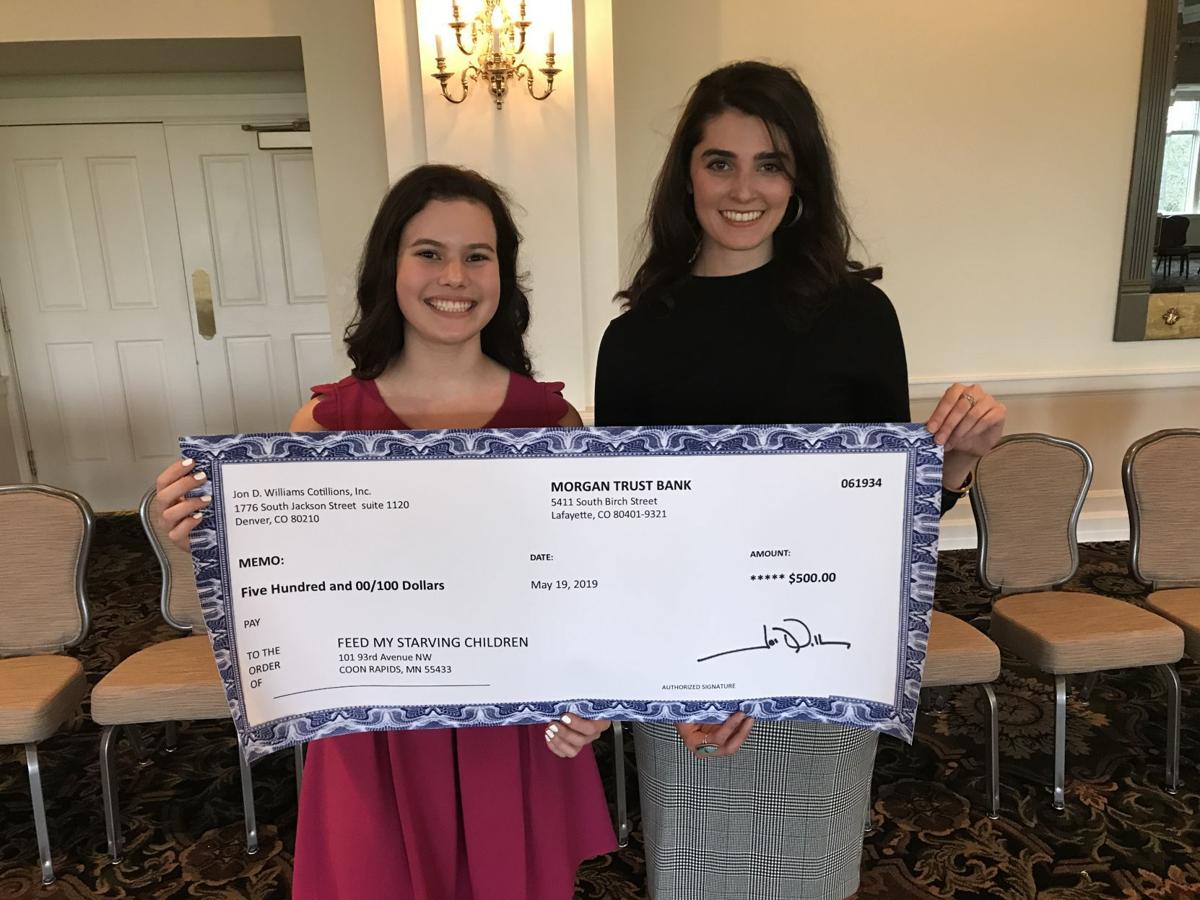 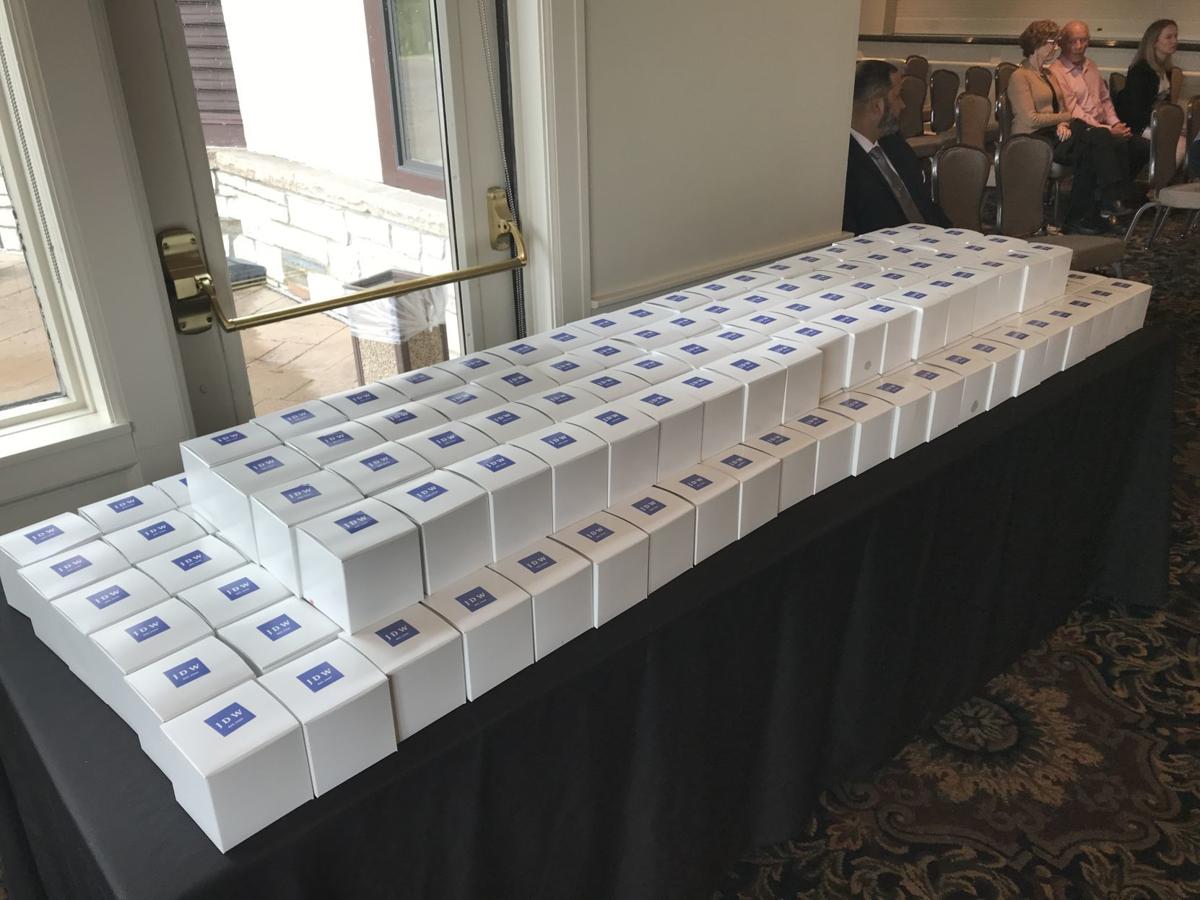 JDW Cotillions ordered 208 individually decorated slices of cake from Cakes for a Cure for a cotillion event. 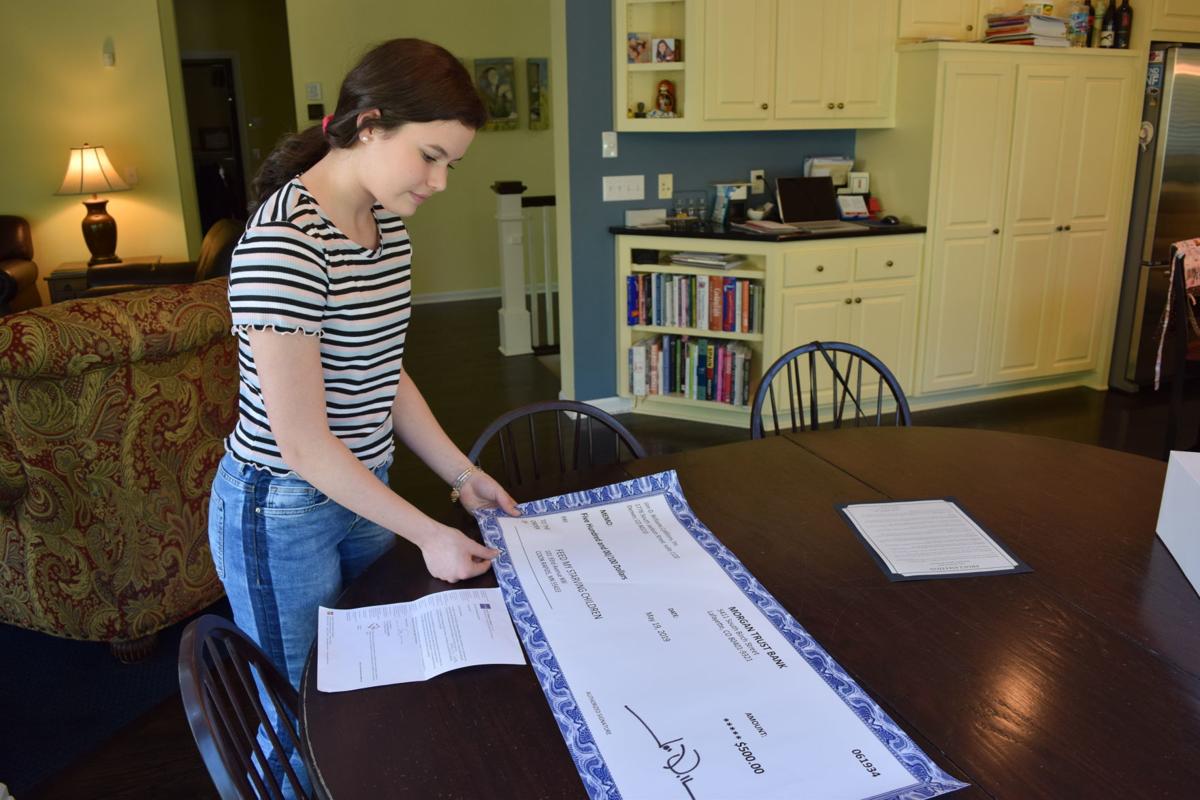 Mary Margaret baked and decorated 208 individual slices of cake for JDW Cotillions, which donated $500 to Feed My Starving Children.

Mary Margaret with a cake she made for a customer’s birthday. Every dollar that a customer pays for a cake goes to one of Cakes for a Cure’s four charities.

JDW Cotillions ordered 208 individually decorated slices of cake from Cakes for a Cure for a cotillion event.

Mary Margaret baked and decorated 208 individual slices of cake for JDW Cotillions, which donated $500 to Feed My Starving Children.

When Mary Margaret Mellen started Cakes for a Cure, it was her way of turning a family hardship into confections for charity.

It began when Mary Margaret’s cousins, Kamryn and Kaitlyn, were diagnosed with neurofibromatosis when they were 9 months old. It’s a genetic disorder that causes small tumors to grow on the body’s nervous tissue, and while the twins are doing well and recently celebrated their 7th birthdays, watching them go through treatment was difficult, said Mary Margaret.

“It was hard for my family to see them like that,” 14-year-old Mary Margaret said. “It made me hurt inside, to know that I couldn’t do anything.”

Instead of letting that feeling remain, at 11 years old Mary Margaret began to plan how she could help her cousins and make a difference for children with neurofibromatosis everywhere. She settled on baking as her channel to charity: She’d learned how to bake from her mother and grandmother, so why not put that talent to use?

So began Cakes for a Cure, which has donated $10,655 to four charities over three years. With the support of her parents, Eden Prairie’s Mary Margaret bakes decadent cakes for customers in the southwest metro, who pay by donating to either the Children’s Tumor Foundation, the Michael J. Fox Foundation, Smile Network International or Feed My Starving Children. The Michael J. Fox Foundation is another personal cause for Mary Margaret — her grandmother, who taught her how to bake, was diagnosed with Parkinson’s disease several years ago.

The first cake for a cure was a chocolate peanut butter cake for her grandmother, Mary Margaret said.

“It was the unofficial start for Cakes for a Cure,” she said. “It was so much fun and I felt so accomplished.”

With her parents’ help, she created the Cakes for a Cure website and began taking orders. Word spread through her family and friends, and she began receiving orders by phone too as news of her work spread. The Mellens support Mary Margaret by contributing all of the baking supplies she needs, so every dollar goes to one of the four charities, said Maria Mellen, Mary Margaret’s mother, and they’re happy to provide.

“We want to raise our kids to to be of service to others,” Maria Mellen said.

Mary Margaret bakes 9-inch round cakes or half sheet cakes, which take anywhere from two to five hours to complete. She offers a host of flavors: German chocolate, vanilla, s’mores, red velvet, marble, chocolate and carrot — and she’s always willing to innovate if a customer has a new request, she said. Red velvet is one of her favorite flavors to bake, while carrot cake is lower on the list.

“It’s a lot of grinding of carrots,” Mary Margaret laughed.

She loves experimenting with colors and designs, especially when the customer asks for a creative cake, Mary Margaret said, but she doesn’t consider herself an artist. When an order came in for a Fourth of July cake requesting an eagle soaring over a lake and cabin, she was determined to do the design justice and reached out to a an artist friend who sketched the scene for her.

Orders aren’t always consistent. On a given week, Cakes for a Cure might receive four orders, or none. She keeps a calendar of when orders are due to stay organized and has only ever turned down one cake because the order came in too close to the deadline.

Because customers can choose how much to donate, there’s no fixed cost of a cake. In three years, no one has ever underpaid or tried to take advantage of Cakes for a Cure’s system, Maria Mellen said.

“We want someone to donate what they feel moved to donate,” she explained. “People who order from her are compassionate.”

Cakes for a Cure adds a personal touch to its deliveries. Mary Margaret and Maria Mellen deliver each cake by hand, partially to ensure that it arrives in good condition, and partially to share a thank you note that details how their donation will affect someone’s life through the foundation they supported.

“It’s really awesome to get the customer’s reaction,” Mary Margaret said. “It’s really cool to see that people are becoming aware of the charities that I support.”

That personal touch is part of what drives a customer to call Cakes for a Cure instead of another bakery, said Maria Mellen.

“They really do want her and her personal spin on it,” she said.

“It’s so awesome that people trust me with their events,” she said.

“This is what I’m doing, on a whole new level,” Mary Margaret recalled thinking. Soon after, she added the Smile Network to her list of charities.

She’s incorporating her causes into her schoolwork, too. Mary Margaret’s science class at Central Middle School recently completed a project that asked them to research a topic in science, technology and medicine and share their findings with the community. Mary Margaret chose to learn more about neurofibromatosis; she wrote to Mayor Ron Case about the disease, and he proclaimed May 17 Neurofibromatosis Awareness Day in Eden Prairie.

Having her efforts recognized by the community is a wonderful experience, Mary Margaret said, and she’s learned a lot by running Cakes for a Cure. She has a lot of balls in the air — Mary Margaret is a member of student leadership at CMS, plays tennis, and is part of the Unified and Friends Forever clubs — but hopes to keep Cakes for a Cure going at least until she graduates high school.

“It’s really opened my eyes to a lot of problems in the world that we can help solve,” she said.

Neurofibromatosis is a genetic disorder that causes tumors to grow on nerve tissue, including the spinal cord, nerves and brain, according to the Mayo Clinic's website.

There are three variations of the disorder, which typically appear in different stages of life: Type I in childhood, Type 2 in the late teens and type 3, or Schwannomatosis, in the mid-20s.

The tumors are typically benign, or not cancerous, but can lead to hearing or vision loss, heart problems, learning impairment and pain, the website says.

Treatment usually focuses on developing healthy behaviors and managing complications in children, but larger or problematic tumors can be removed with surgery or treated with targeted radiation with stereotactic radiosurgery, according to the Mayo Clinic's website.

Cakes for a Cure

When a customer orders a cake, they decide how much to donate to one of Cakes for a Cure's four charities, and 100 percent of their donation goes to the charity. The Mellen family provides all of Mary Margaret's baking supplies.