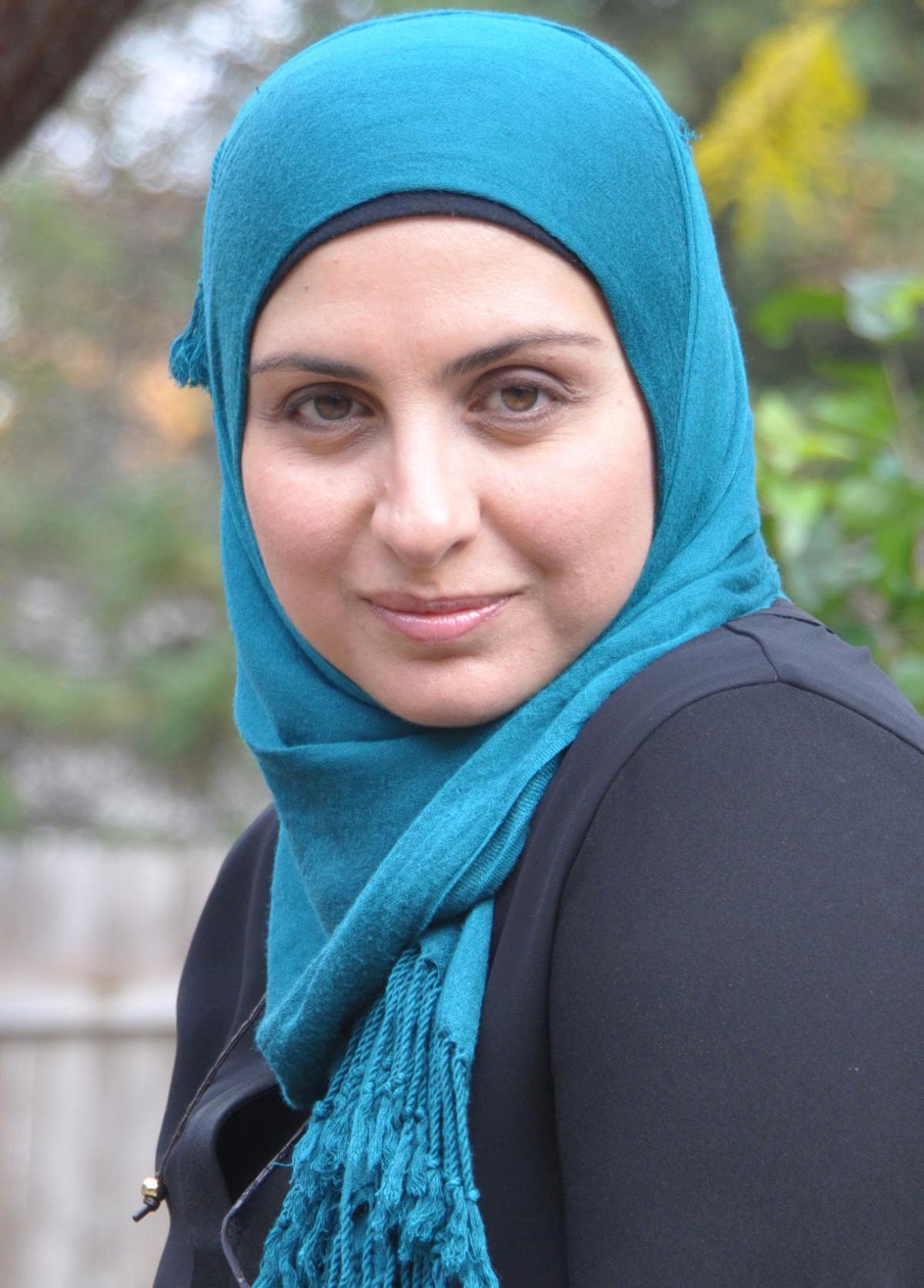 Hanadi Chehabeddine, a native of Lebanon, has been an Eden Prairie resident for eight years. 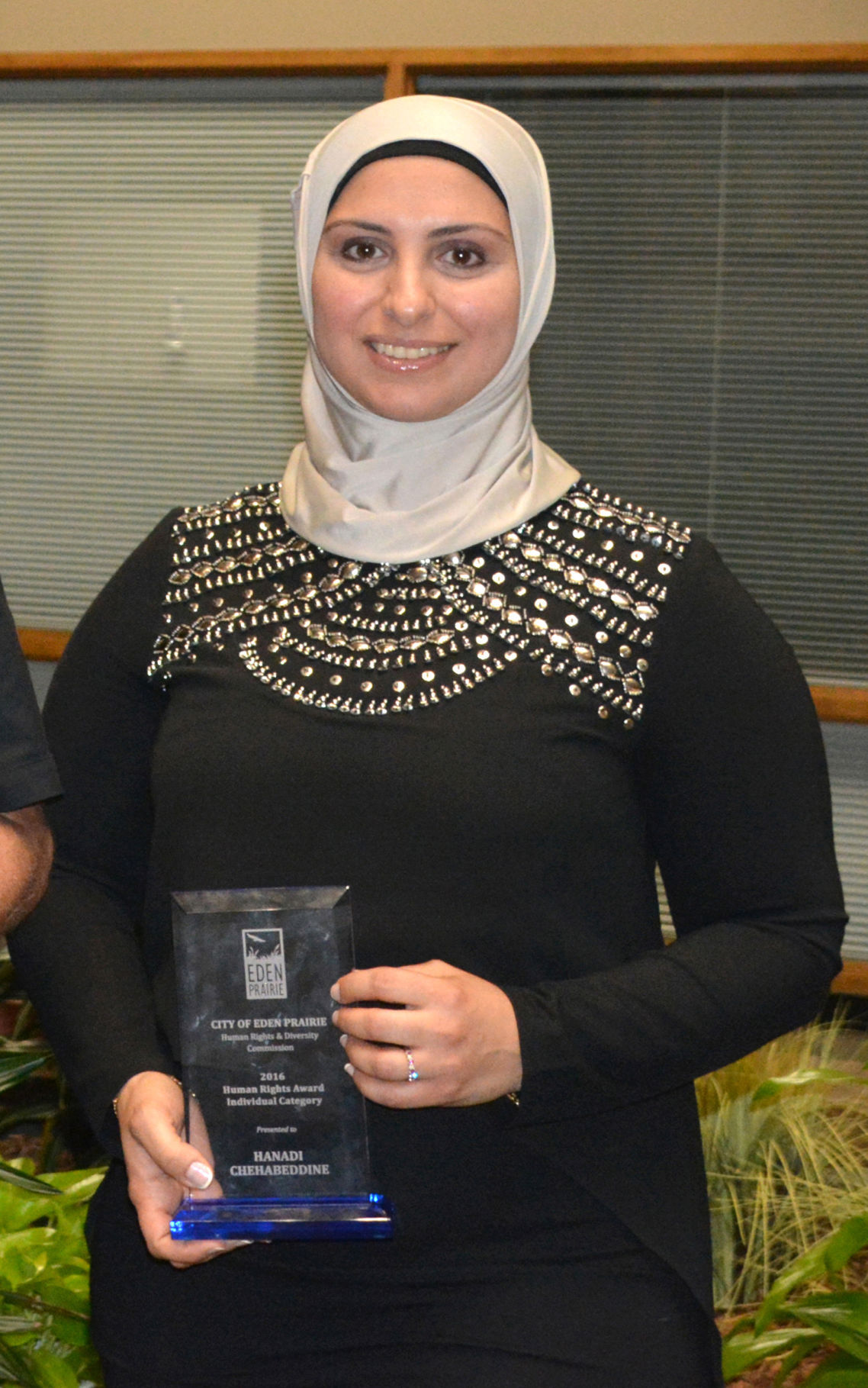 Hanadi Chehabeddine poses with the Human Rights Award she received in 2016.

Eden Prairie resident Hanadi Chehabeddine was a city Human Rights Award recipient in 2016. She received the individual award for upholding the values of the Eden Prairie Manifesto “through her work to build bridges of unity by dismantling misinformation and fear about Muslims,” according to a 2016 story.

Chehabeddine, a native of Lebanon, is married with three children. She’s a published writer, speaker and is pursuing a master’s degree in international leadership at St. Thomas University. Prior to coming to the United States eight years ago, she was an award-winning creative and communication specialist working across different media platforms. She has been on several award show jury panels in the Middle East and covered the 2004 Cannes Advertising Festival.

The Human Rights Award is a great initiative that brings people together and raises awareness for issues the city is going through, Chehabeddine said.

“I totally did not expect it and I believe I read the email about three or four times before realizing this is not a scam,” she said of receiving the award. “I was overwhelmed by the recognition.”

Chehabeddine said she comes from a country where Christians and Muslims live and work alongside each other. “It was shocking to me to see that’s not the case in every country that has multi-religious communities,” she said of coming to the United States.

She saw Islam being misrepresented in the media and decided to reach out to people she had direct access to to dispel fears and misconceptions, like talking to the moms in her ECFE baby classes or inviting a friend to a fasting experience, she said.

“I also was very inspired by the American Constitution and the freedoms that are guaranteed by the Constitution,” she said. “It’s a great gift for people coming from different religious and racial ethnic backgrounds.”

Chehabeddine eventually moved into writing for publications and having what she calls “media interventions.” She’s volunteered with the Islamic Resource Group and been a speaker at TEDxEdina and the national Diplomacy Summit in Minneapolis. She was also invited to be a U.S. State Department International Speaker and uses a lot of online social platforms to reach people, she said.

“I’m really focused on having a voice in the media for Muslims — not just having a guest on a show but a constant presence,” she said.

Chehabeddine said a lot of misconceptions and fears about Muslims come from people not personally knowing a Muslim. “A lot can be solved if we can re-create that safe place, that safe zone where people can just meet and talk,” she added.

According to the commission, the goal of the Human Rights Award is to recognize an Eden Prairie individual, nonprofit organization, business or youth who has worked to create an inclusive community spirit.

A common criteria for each category is that the nomination must be related to the stated intentions of the Eden Prairie Manifesto, which was drafted by the late Dr. Jean Harris, a former Eden Prairie mayor. The document proclaims the community’s commitment to tolerance and inclusion.

“In the spirit of celebrating diversity and human rights in Eden Prairie, it is important to recognize the work of those who embrace diversity, and create an inclusive environment through their actions, activities and/or programs,” said Sana Elassar, a commission member.

The deadline for Human Rights Awards nominations is 4:30 p.m. Tuesday, Feb. 28. Visit edenprairie.org/humanrightsaward for more details about the award program and a link to the online nomination form.

Sana Elassar said each day is a day to celebrate human rights and diversity.

The Human Rights and Diversity Commission (HRDC) is one of the city of Eden Prairie's six city commissions. This collection includes articles …