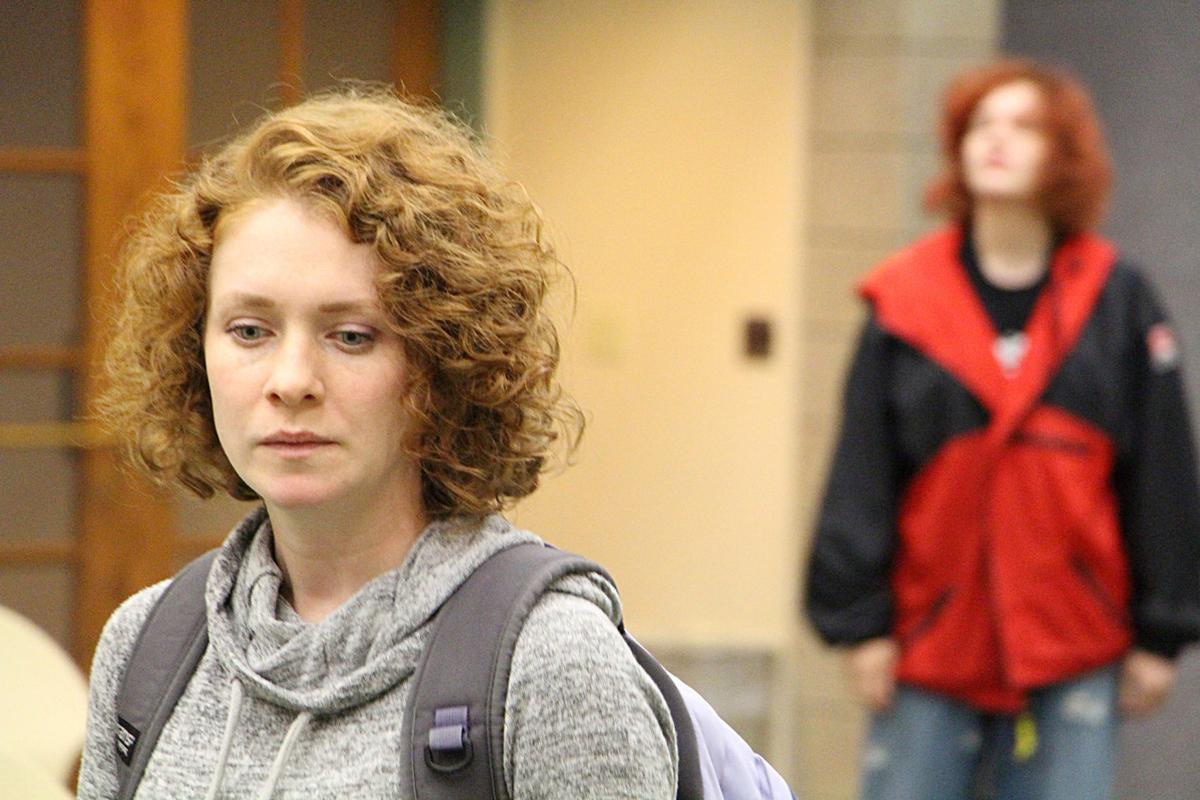 Dora (Kayla Dvorak), a character who finds herself in Chicago, faces a decision about where to go. 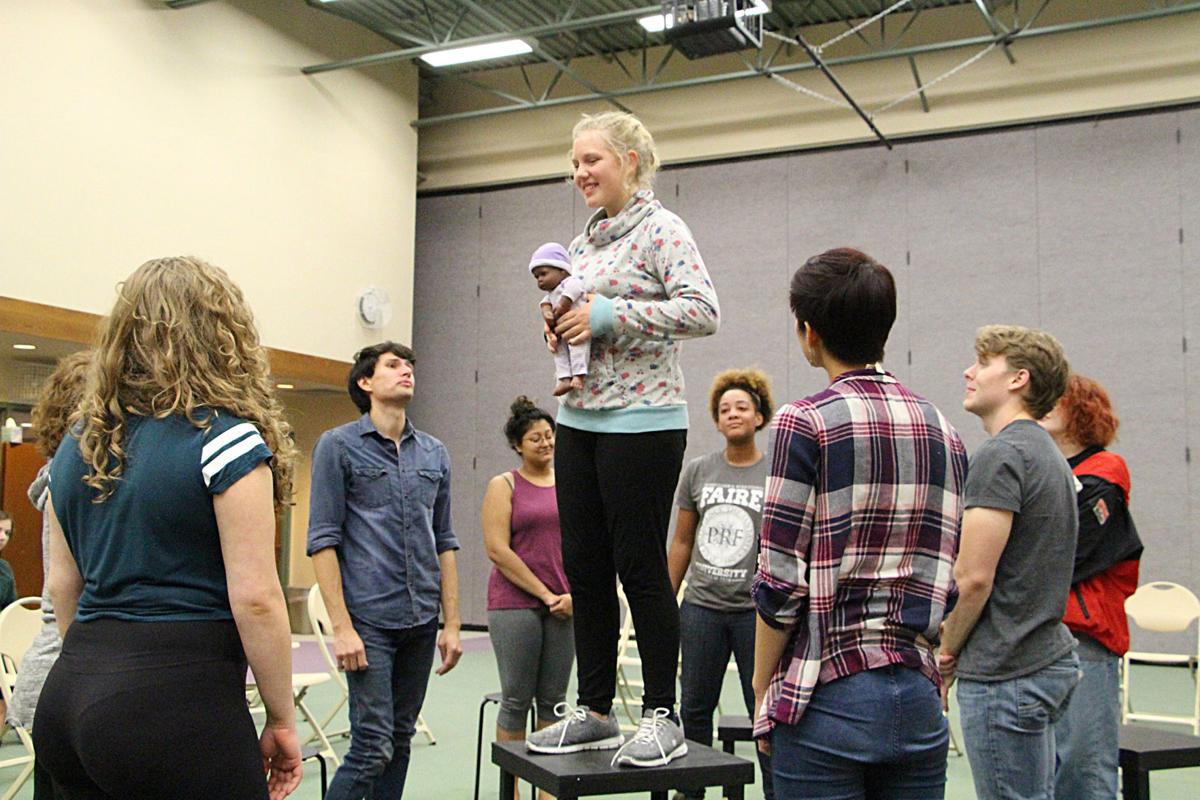 The cast gathers around the character of a young girl (Madeline Pukite). 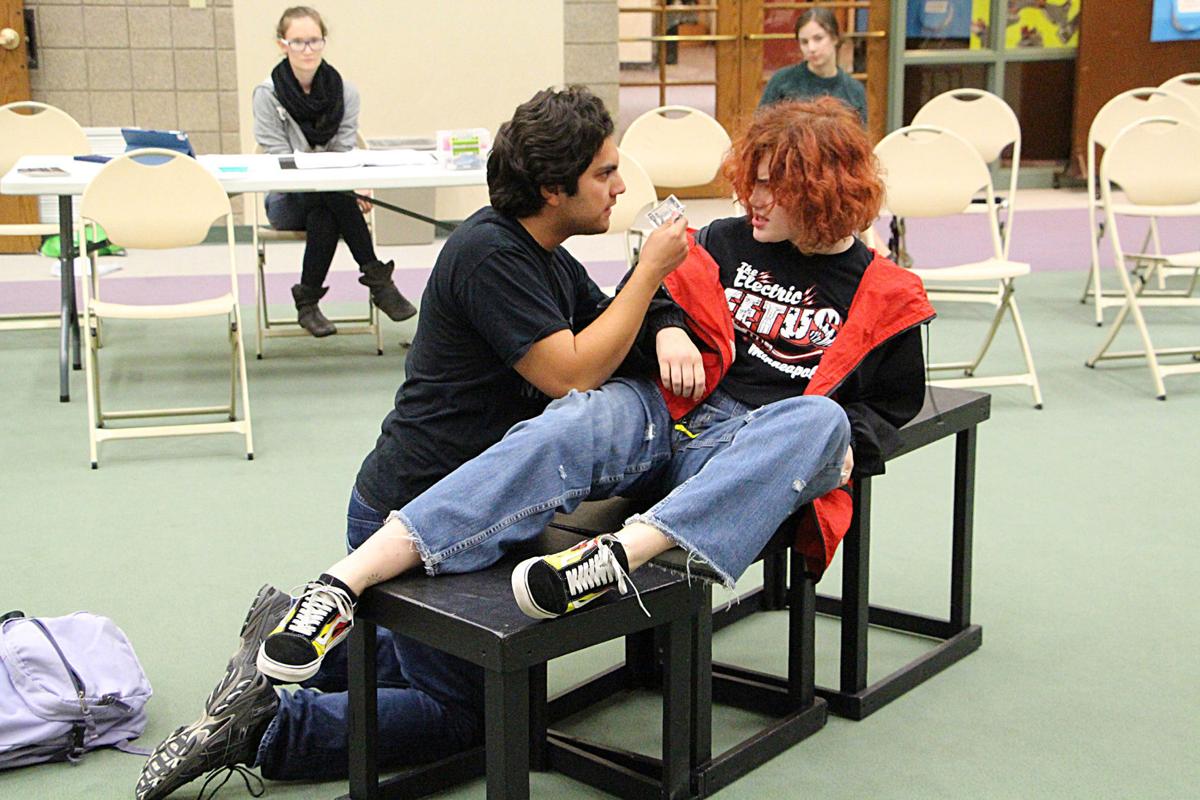 Jeannette (Delaney Quinn) is approached by Billy (Justin Cervantes) who attempts to persuade her with cash.

They’re from cities audiences recognize. They endure work in familiar neighborhoods. And their stories aren’t what one might expect.

“Body & Sold,” a play coming to Eden Prairie on Thursday, Oct. 26, delves into the stories of eight trafficking victims from five major U.S. cities. Their tales begin with rocky beginnings, making them vulnerable to the sleek pimps who approach them offering places to stay. Pimps use words such as “loyalty” to draw them in.

One character describes the situation as “The shell shock no one wants to talk about.”

Artistic Director Shelley Smith, an Eden Prairie resident since 1984, chose the locations of “Body & Sold” with intent. They are meant to reflect the three components of sex trafficking. Pimps and victims, she said, are frequently from Minneapolis and St. Paul. The perpetrators are from the wealthier suburbs, on average.

Detective Carter Staaf led the efforts and will attend the performance in Eden Prairie. After the show, he will speak during the discussion.

The cast of 10 includes two high school students, one from Minnetonka High School.

Throughout the play, the ages of the characters are deliberately reinstated to remind the audience of the discord between the young ages and precarious situations, Shelley said. The performance follows each story to the point of finding hope for the future.

“I’m OK. I’m not a victim,” one character says to another.

“No — you are a survivor, my girl,” the other replies.

Smith is a founder of Chain Reaction Theatre Project. Each year, she selects a different play to address a social justice issue, she said. While researching for a previous show, she found “Body & Sold.” Deborah Fortson wrote the play based off of interviews with sex trafficking victims.

“It was perfect,” Smith said. “Basically what I do is I come up with the topics I want to delve into — whatever’s pulling at me — and if nobody’s saying what I want to say, then I write it, but this woman in Boston had it done.”

When Fortson came to St. Paul to gather interviews for the play, she arrived at Breaking Free, a nonprofit helping women and girls who have been involved in prostitution. In turn, the nonprofit is sponsoring the St. Paul performance of “Body & Sold.”

Chain Reaction Theatre Project is a nonprofit itself. They partner with nonprofits whose missions match the themes of the show. At several of the “Body & Sold” performances, survivors will be present.

Following each performance, local nonprofits that focus on issues of sex trafficking will have tables of information.

Smith plans to focus on masculinity in next year’s play. In the future, she hopes to work on a play about cultural issues and relations.

Performances will occur throughout the Twin Cities beginning Oct. 14 and ending Nov. 2. A performance will take place in Eden Prairie at 7 p.m. Oct. 26 at the Eden Prairie City Center. Its website is chainreactiontp.com.