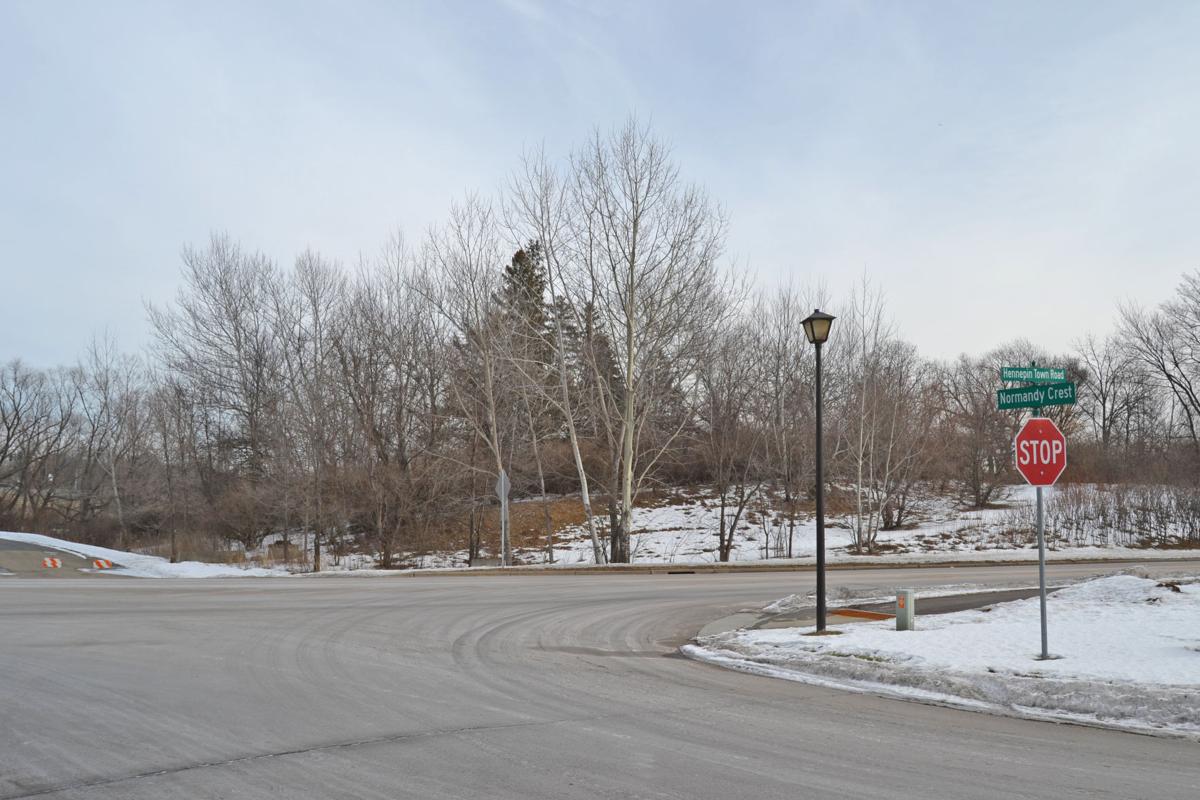 The Prairie Bluffs Senior Living development is planned for 4.74 acres bordered by Hennepin Town Road on the west, Pioneer Trail on the north and the ramp to southbound Highway 169 on the east. The property pictured here is near the intersection of Hennepin Town Road and Normandy Crest.

The Prairie Bluffs Senior Living development is planned for 4.74 acres bordered by Hennepin Town Road on the west, Pioneer Trail on the north and the ramp to southbound Highway 169 on the east. The property pictured here is near the intersection of Hennepin Town Road and Normandy Crest.

The Eden Prairie City Council approved several items related to Prairie Bluffs Senior Living, a two-building, 138-unit development planned for 4.74 acres bordered by Hennepin Town Road on the west, Pioneer Trail on the north and the ramp to southbound Highway 169 on the east. Project proponents have said the development will include assisted living, memory care and independent living units.

The City Council adopted a resolution for a site plan for Prairie Bluffs Senior Living, approved a development agreement for the project, approved a second reading of an ordinance for a planned unit development review with waivers and approved a zoning district change from rural to multi-family residential.

"I'm really proud of what we have accomplished here because I think we have a great blend of services to seniors inside and then a great look outside," said project architect Link Wilson of Kaas Wilson Architects.

The City Council approved several items related to Prairie Bluffs for a first reading and requested multiple changes to the project in October 2016. The city had since been working with the developer, Albert Miller, on the number of affordable units, removal of fourth-story units on the west side of one of the buildings, construction of a right-turn lane on Hennepin Town Road going to Pioneer Trail, landscaping, grading, sidewalk connections and parking.

"I am happy that we've had this opportunity to be involved and we see our imprint on the final product," said City Council member Ron Case.

According to the city, the project changes include removing the fourth floor on the west side of the north building. The plan now calls for six four-story units on the north building facing Highway 169, which are not visible from Hennepin Town Road.

"The applicant modified the layout and number of units in the south building to account for the relocation of the fourth-story units from the Hennepin Town Road side of the building," the city report states.

"As a result of this council direction, the south building is longer and extends further south. The closest point of the south building to Hennepin Town Road decreased from 27 feet to 21.5 feet, but the setback on the backside increased from 11.1 feet to 15.5 feet. The waivers have been revised consistent with this change."

The city report said the landscaping plan has been changed to include planting beds on the south side of the entrance into the complex to complement plantings on the north side of the entrance. Miller has increased the size of the trees at the time of installation for a more immediate impact. The new plan also calls for a sidewalk around the entire building and will connect to the public sidewalk around Hennepin Town Road.

"I do want to thank you for making the whole project outside more walkable for our residents," said City Council member Kathy Nelson.

Mayor Nancy Tyra-Lukens said the council has had requests from some residents about reducing the number of sidewalks at the site to discourage people from crossing Hennepin Town Road from Normandy Crest. However, the city wants to encourage movement.

"I'm very much in favor of the way this is proposed," she said.

The development will have 121 parking stalls and seven proof-of-parking surface stalls. If the building is re-purposed, the development agreement states that City Council review and approval is required for any change of use.

"This provides the city the opportunity to review project specifics including parking prior to the approval of any change in use. In addition, the applicant has agreed to secure additional parking off-site to address peak parking times and there is language in the development agreement to address this," the city report said.

Wilson said his client has agreed to increase the number of affordable units from five to 14 units, which he believes is "a terrific enhancement."

Wilson said the next steps for the project include going through the city's building permit process. Ground breaking on the project could take place later this summer with the goal of opening the complex to seniors in the fall of 2018.