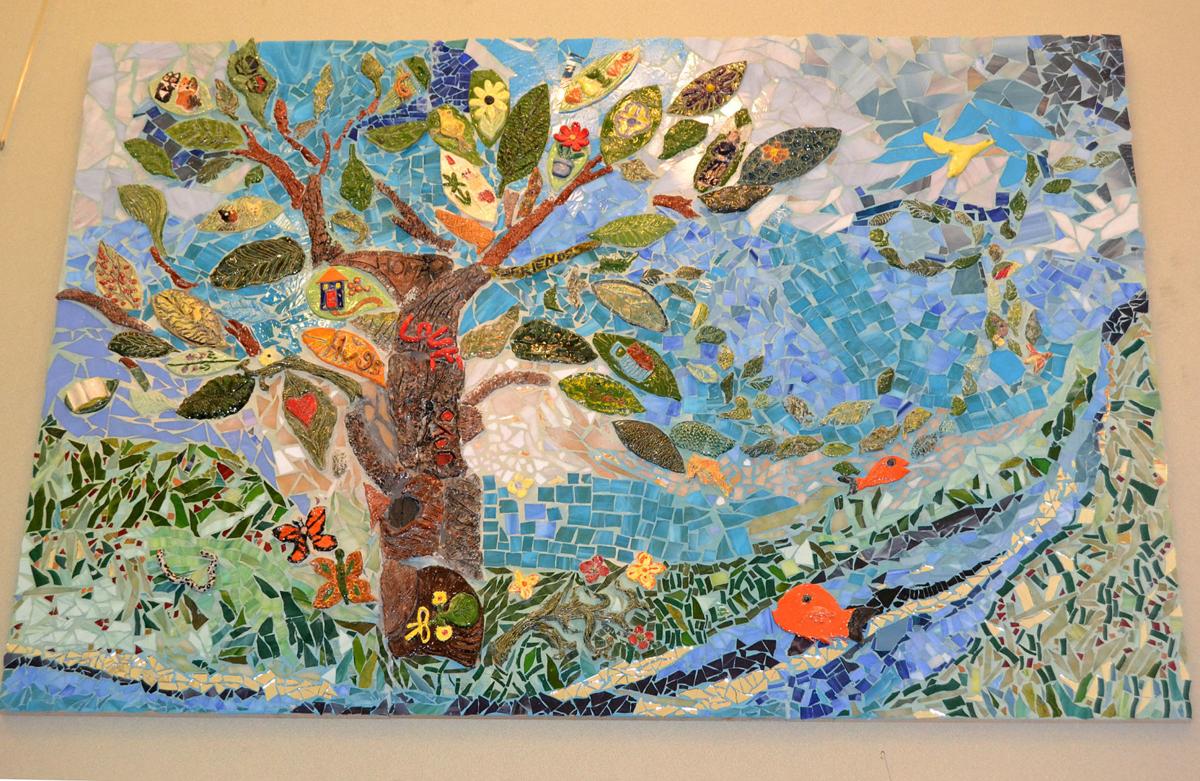 The finished mosaic at Edendale Residence of Eden Prairie hangs above the main entrance in the lobby. 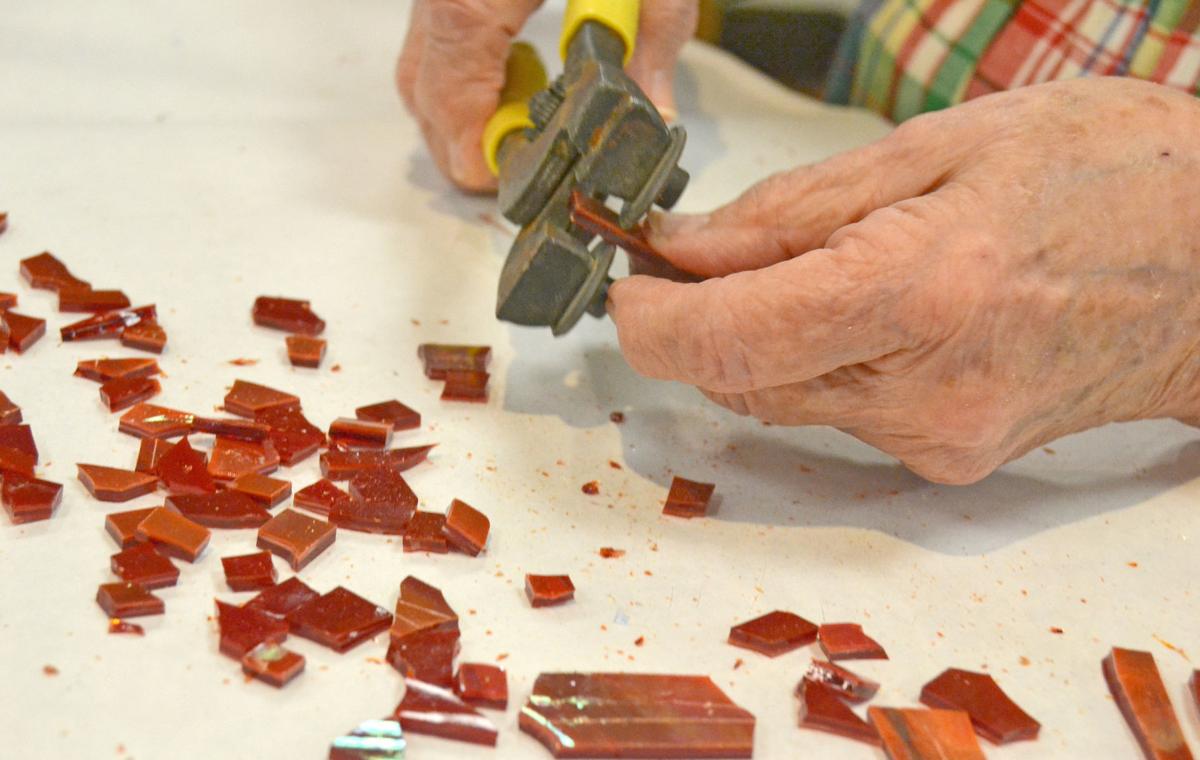 Jan Weegmann, a resident of Edendale Residence of Eden Prairie, cuts glass pieces for the mosaic on May 8. 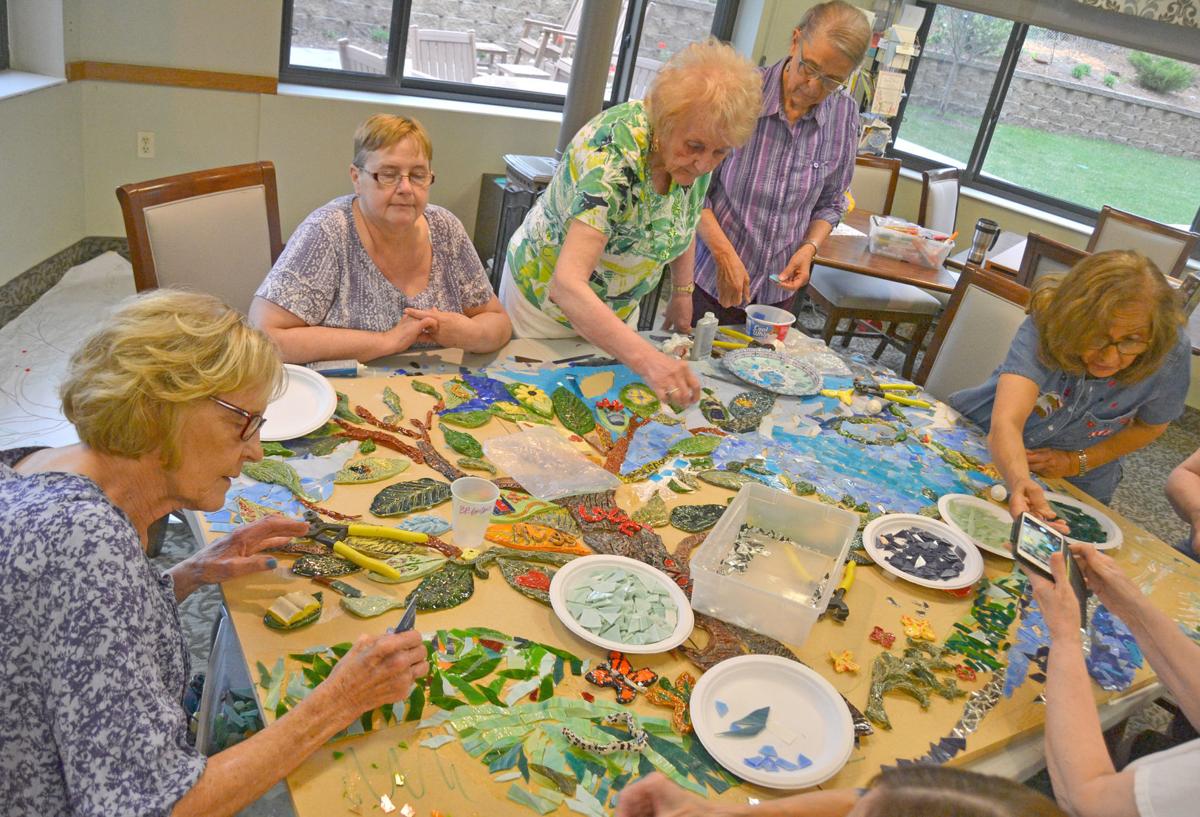 Project participants place the pieces on the mosaic during a May 8 session at Edendale Residence of Eden Prairie. Pictured, from left, are Marilyn Primmer, Karen Sewell, Gayle Quinnell, Pat Sample and Effat Hanna. 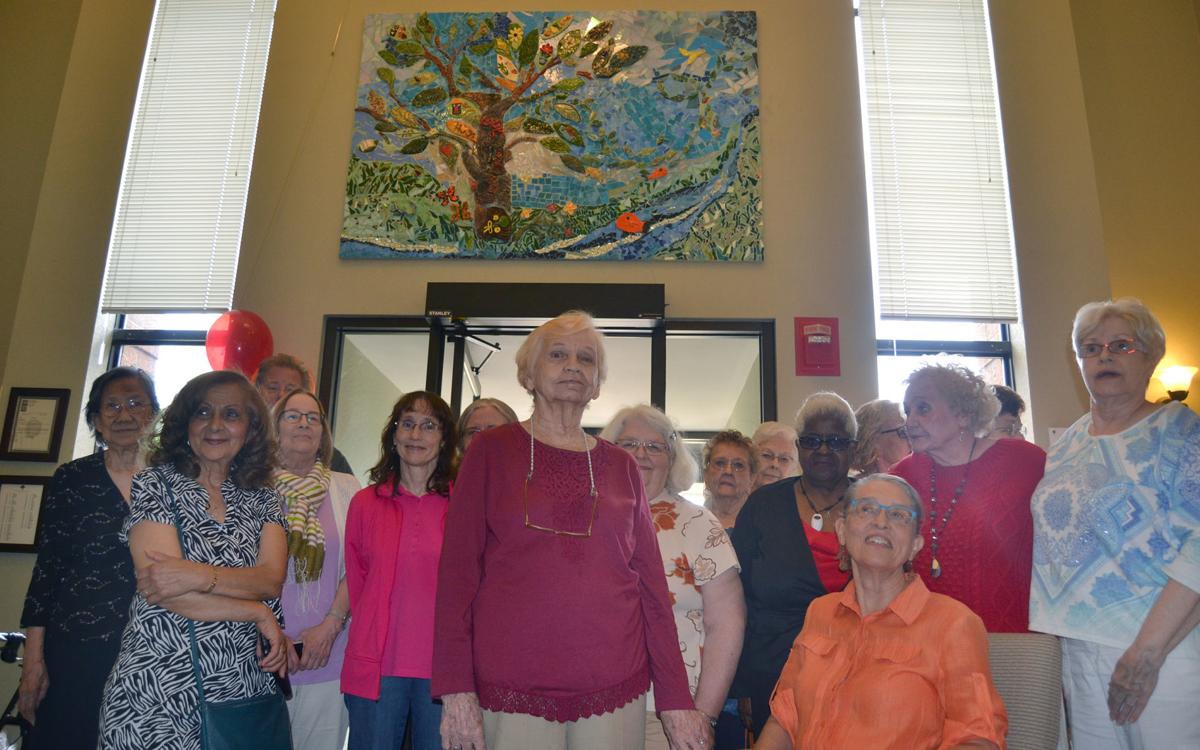 Participant artists in the Edendale Residence of Eden Prairie mosaic project pose for a photo under the finished mosaic during a May 22 celebration. 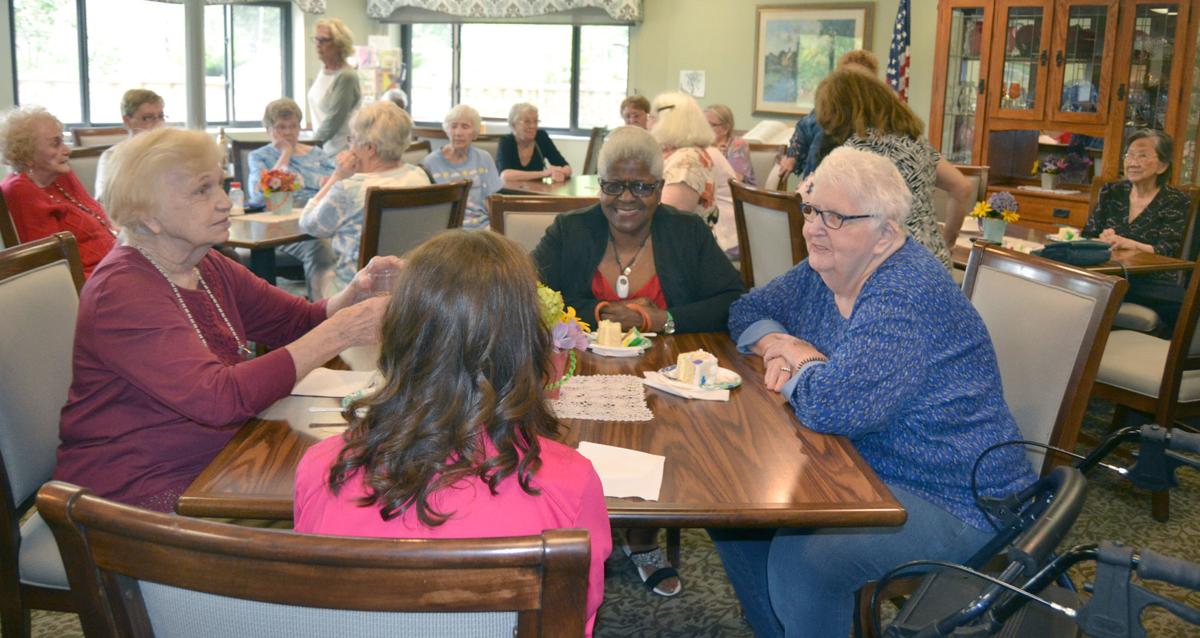 Residents of Edendale Residence of Eden Prairie celebrate the completion of the mosaic with cake on May 22. 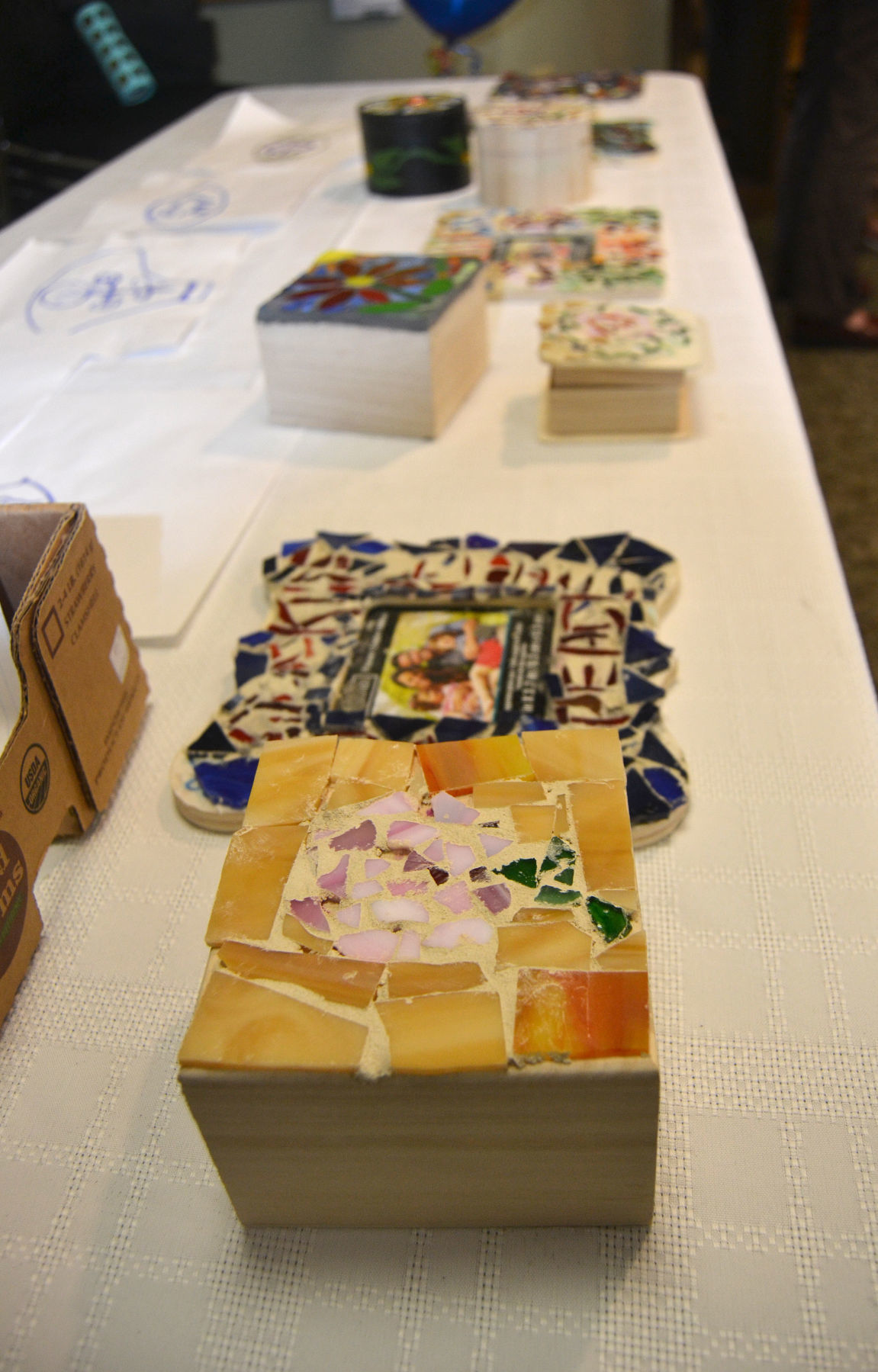 Smaller mosaics made by the residents at the beginning of the art project were on display during the May 22 celebration.

The finished mosaic at Edendale Residence of Eden Prairie hangs above the main entrance in the lobby.

Residents of Edendale Residence of Eden Prairie celebrate the completion of the mosaic with cake on May 22.

Gayle Quinnell said she had never done a large-scale art project prior to March.

That all changed when she decided to participate in a project at Edendale Residence of Eden Prairie, where she lives, to create a mosaic to decorate the building. At first she couldn’t imagine cutting all the pieces of glass and clay when she learned more about what the project would entail.

“I didn’t know what to expect. When they said they were going to cut glass and make a picture, I thought, ‘Wow, that will be different,’” she said.

Since March 6, residents at Edendale had been participating in a public art project to create a mosaic that represents what they value about living at Edendale. The culmination of the project was a May 22 celebration to reveal the finished mosaic. It is hanging above the main door inside the lobby area.

“I think it’s a good project. It’s going to be just beautiful,” Quinnell noted while working on the mosaic on May 8.

The project was made possible through a $62,000 grant Avinity, which owns and operates Edendale, received from the Minnesota State Arts Board for art-related projects at multiple Avinity sites. The grant funded 10 projects, including one one at Edendale, said Gigi DesLauriers-Knop, vice president of operations at Avinity.

Avinity partnered with an organization called Compas for the project. Artist Anne Krocak was contracted through Compas to lead the project at Edendale.

Krocak said she took the residents through the process of creating public art, which was a cooperative process. They started by learning how to make smaller mosaics and worked together on creating a design. Krocak created some mockups based on the feedback and the residents voted on the final design.

The residents then created some clay pieces to be incorporated into the mosaic and spent time cutting pieces of glass and putting them into place on the mosaic. The overall picture shows a tree next to a stream. Different parts of the tree and picture represent what residents value about living at Edendale.

About 18 people were present for the planning part of the project, and, on average, 12 to 15 different people showed up on Tuesday each week to make their contribution to the mosaic, Krocak said

Pat Samples, an independent consultant who assisted with the project, said many times people don’t know it’s possible to do a project like this. The area of what she called “creative aging” is an opportunity for people to improve their memory and improve their brain function, she added.

Edendale resident Marietta Larson said her father was an artist and she began pursing art more seriously after her eight children had grown up and left the home. She enjoys capturing landscapes and scenery with watercolor painting. When she heard there would be an art project, she was immediately interested even though it was through a different medium. She had never worked on a mosaic before.

“We were able to use our own ability. It was kind of fun for me,” she said.

Larson said the mosaic will be something nice to remember. Being 84 years old, she enjoys learning because it keeps her going.

“I love to try new things,” she said.

Samples said a project like this helps older adults to be able to tell their stories, whether it’s through words, a picture or on the stage.

“It’s part of the needs of older adults to leave a legacy, to tell their story, to make sense of their life experience and remember and piece together what was meaningful for them,” she said.