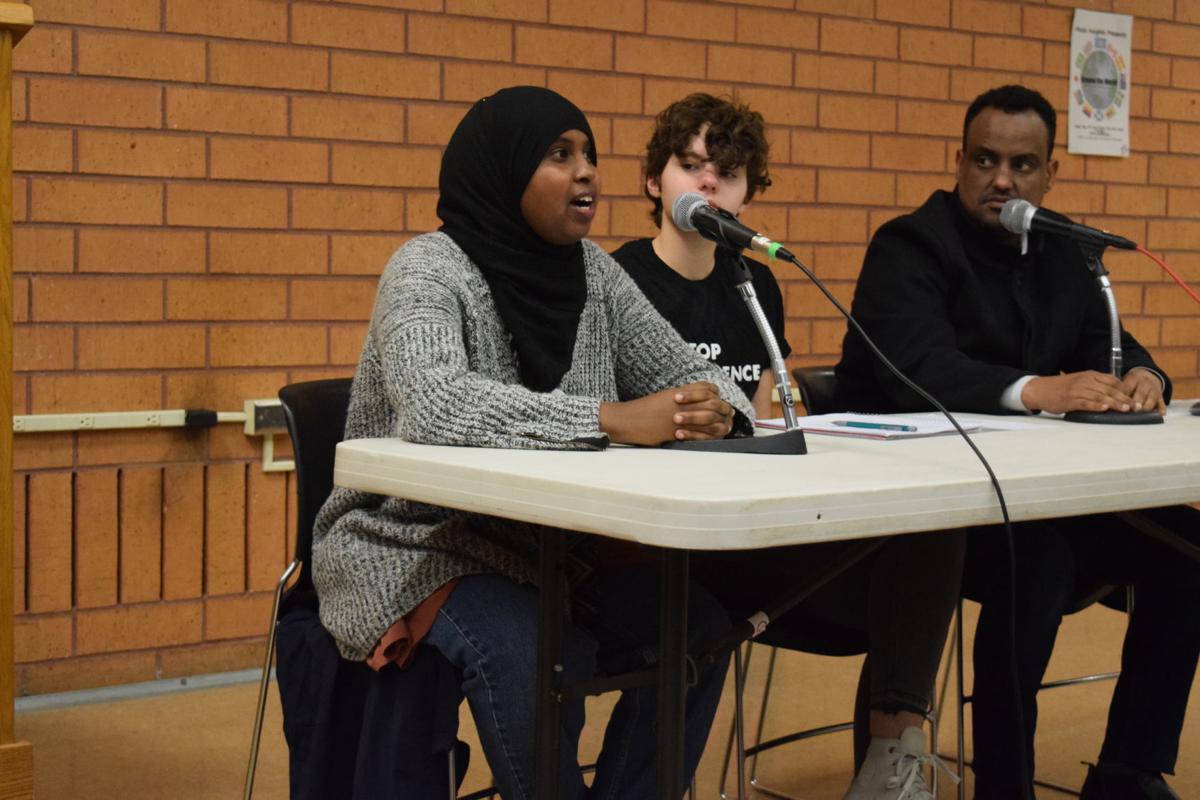 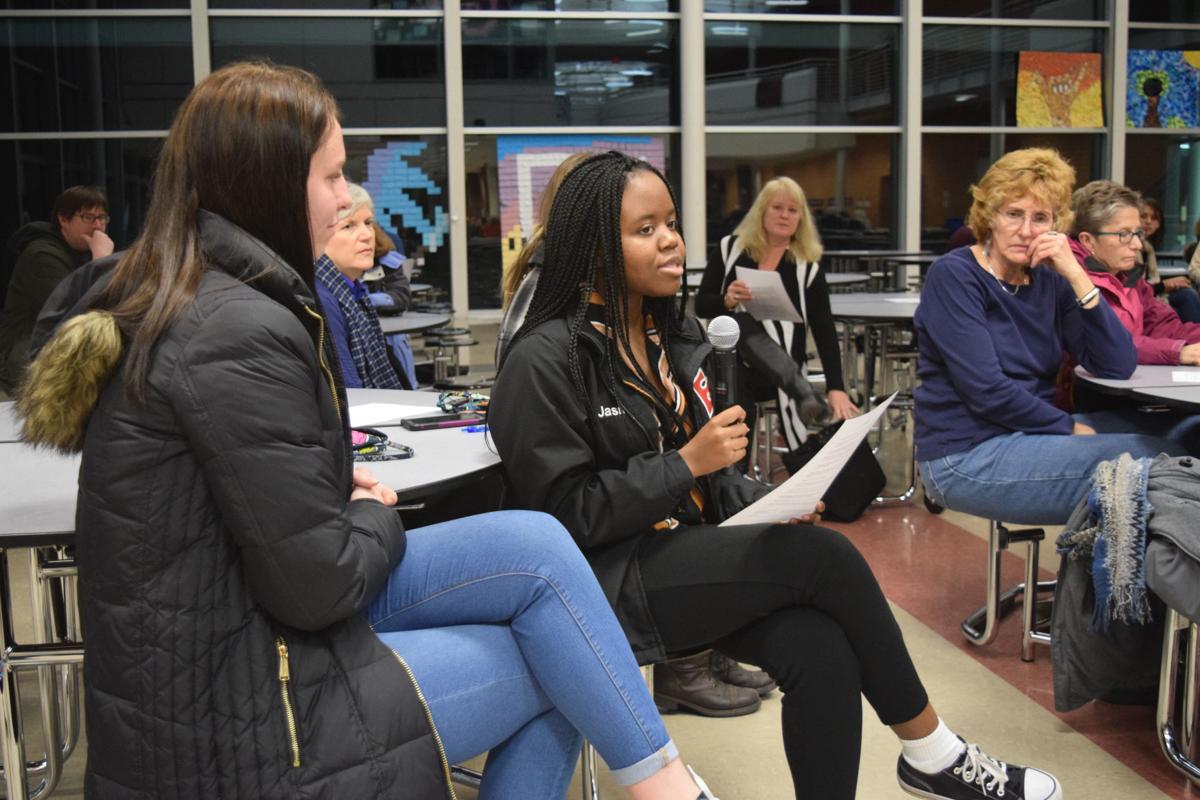 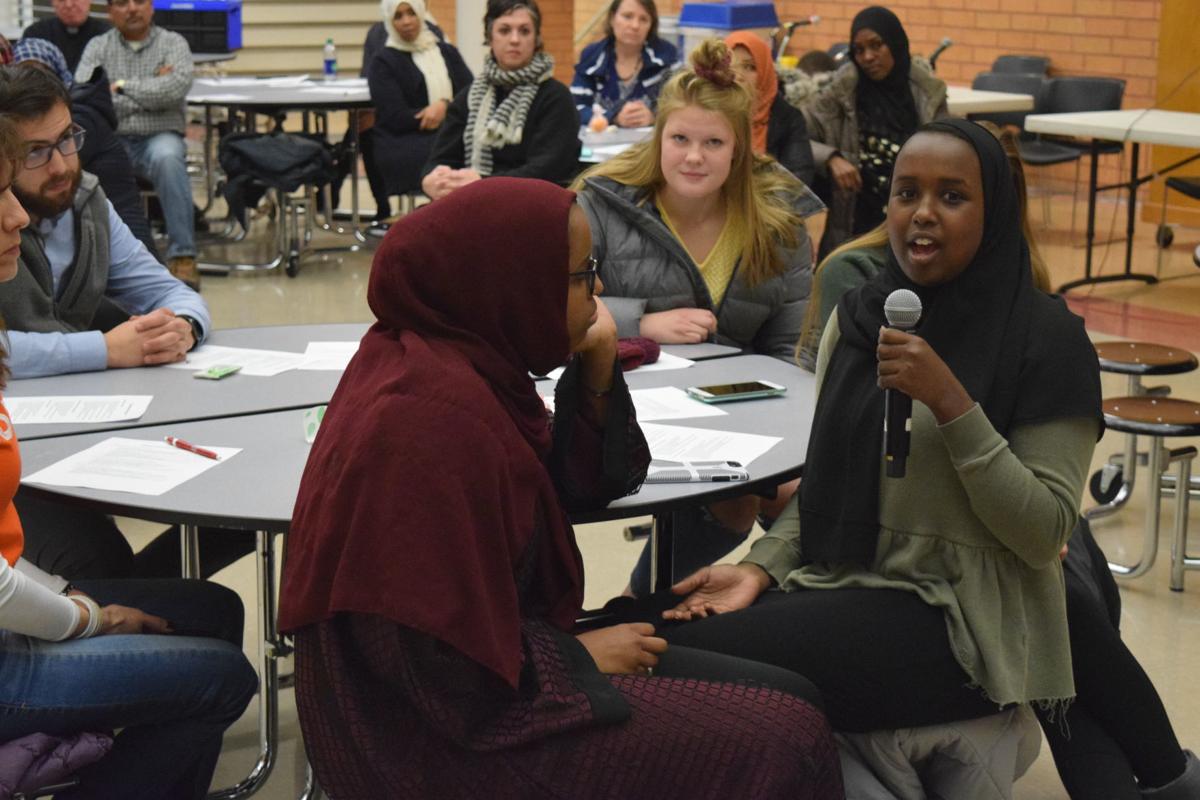 Hafsa Abdi, a junior at EPHS, describes her daily experience in high school. 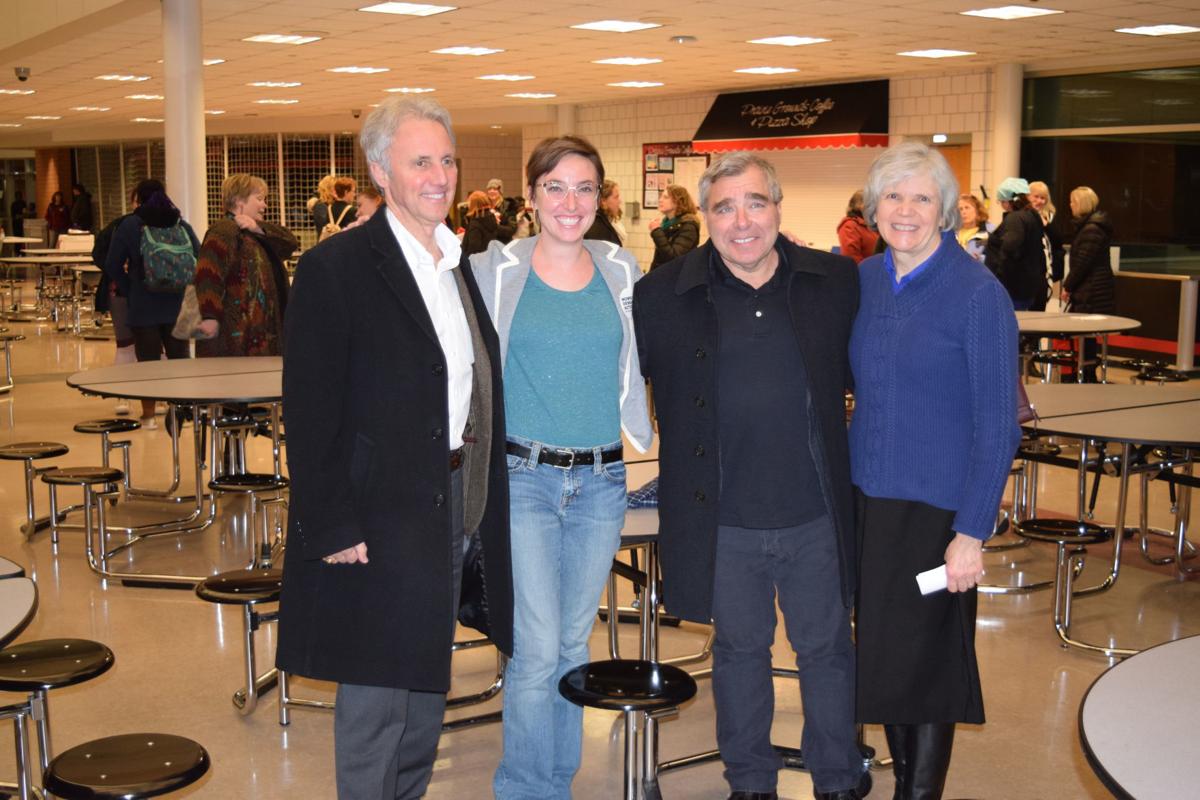 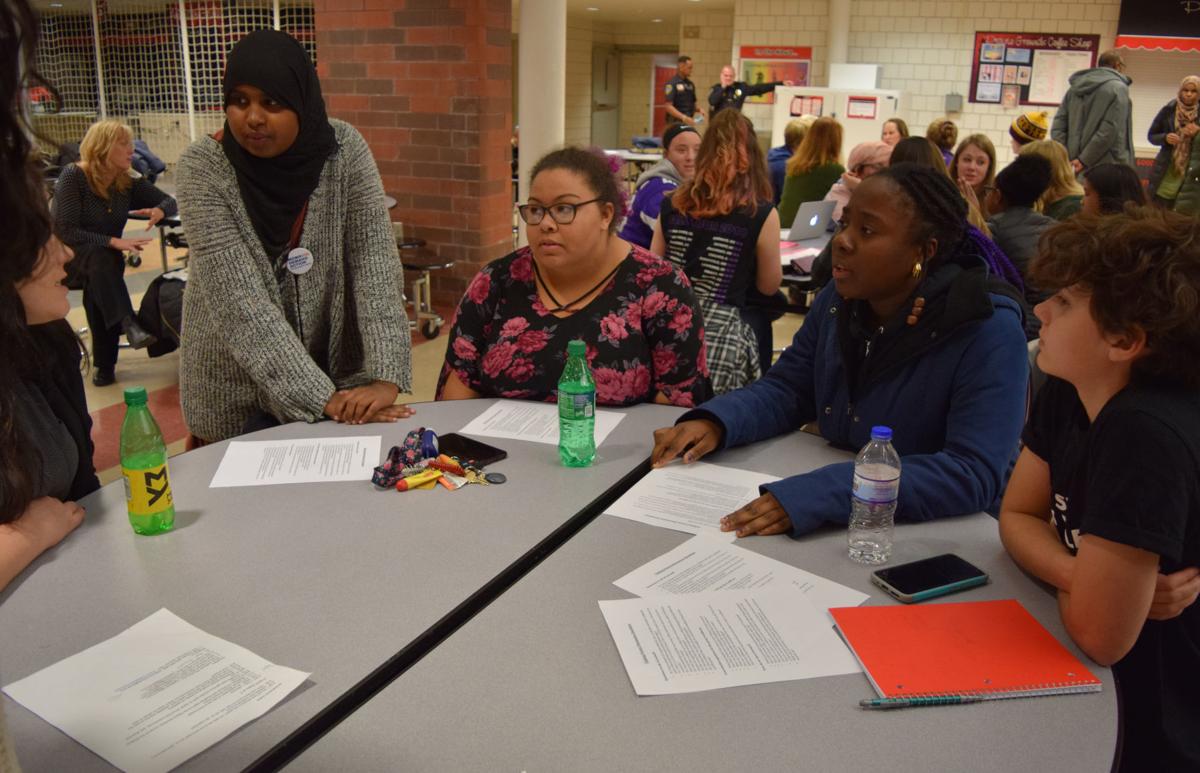 From left, EPHS students Muna Galbayte, Neyonte Clark, Funmi Banjoko, and Sydney Lewis talked about the reaction to the McDonald’s incident and what future actions the community will take. 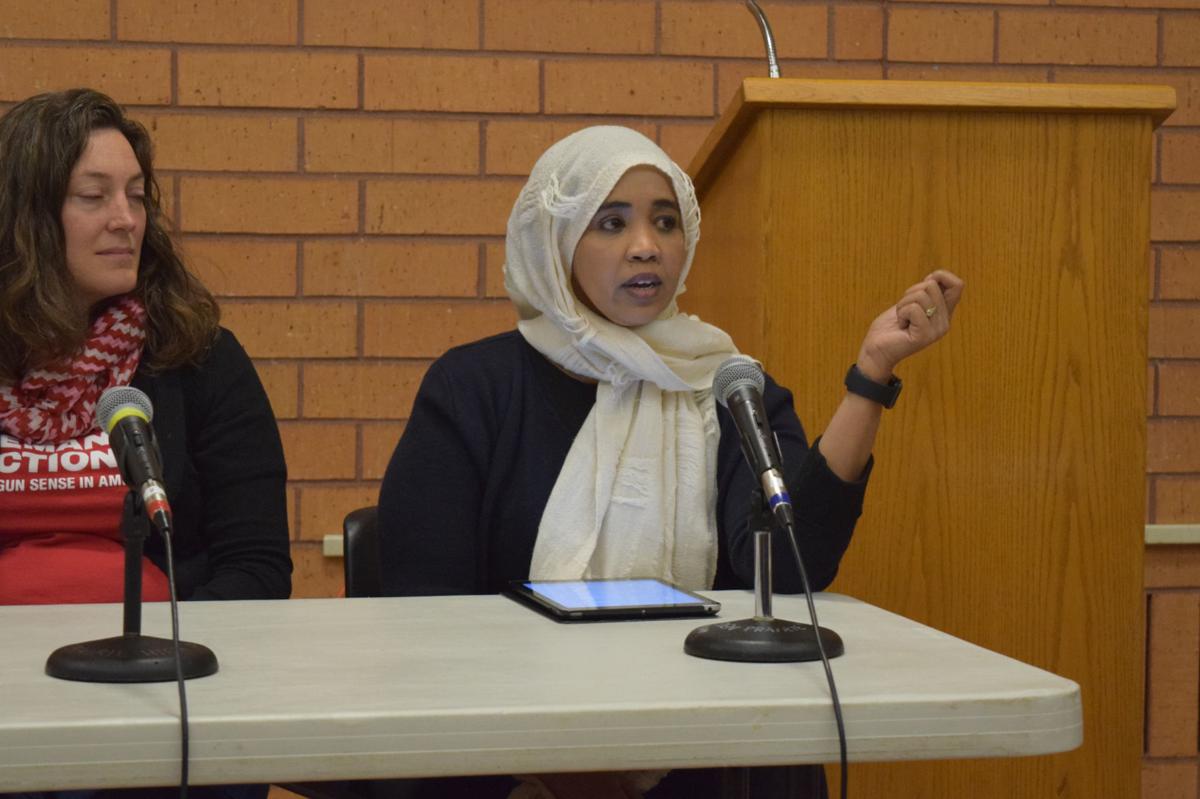 Fadumo Hassan talked about the fear and difficulties of raising a black son in Eden Prairie. 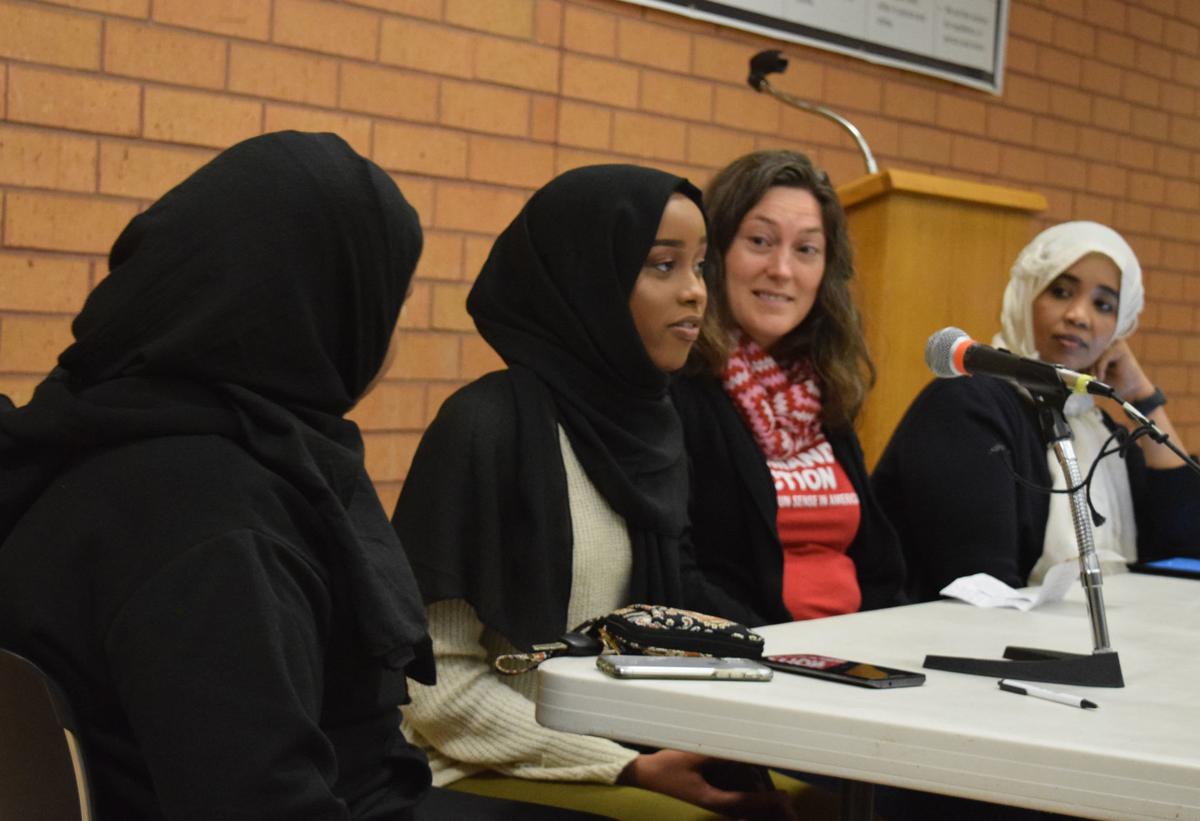 Amal Mohamed, second from left, talked about her experience at the McDonald’s incident with Jihan Abdullahi, left, while Sarah Black, second from right, and Fadumo Hassan listened.

Residents of Eden Prairie gathered on Monday night to discuss the intersection of gun violence and racism, spurred by a racially charged incident at an Eden Prairie McDonald’s in November.

Eden Prairie panelists, community organizers and residents spoke in the East Commons of Eden Prairie High School at 7 p.m. on Dec. 10. The crowd of approximately 130 people had come to reflect on the Nov. 19 incident in which Lloyd Edward Johnson, 55, of Eden Prairie, allegedly threatened and brandished a gun at a group of Somali teenagers who had come to the McDonald’s for a study break. Johnson has been charged with terroristic threats with reckless disregard of the risk and possessing a pistol without a permit in a public place, both of which are felonies. He is out of custody and awaiting a first court appearance, which has not been scheduled.

After a long introduction by Todd Gramenz of Black Lives Matter St. Paul and a reading of part of Eden Prairie’s Human Rights Manifesto that took the evening off schedule, the event found its rhythm.

Jaylani Hussein of the Council of American-Islamic Relations Minnesota, which is representing the families of the teens involved in the incident, took the floor to talk about the behavior of McDonald’s employees. A viral video of the incident showed a McDonald’s employee yelling at the teens to leave the restaurant in the same direction as Johnson after he threatened them, and another employee was seen in the video saying that the teens must have done something to deserve Johnson’s reaction.

“How can the people that we have given authority in those spaces act like that?” Hussein asked. He praised the actions of an unidentified bystander, seen in the video telling the employees to call the police and let the teens remain inside.

Amal Mohamed and Jihan Abdullahi were two of the teens present at the McDonald’s incident, and both were part of a six-person panel who shared their experiences of racism and gun violence.

“We were scared,” Jihan said. “Anything could have happened.”

Amal spoke of her childhood growing up in Eden Prairie and her sense of shock after the incident.

“I never expected something like this would happen to me,” she said.

Panelist Fadumo Hassan, a former candidate for Eden Prairie School Board, discussed her sense of home in the city and the fear inherent in raising a black son in Eden Prairie.

“We are not just residents of Eden Prairie, we feel we belong in Eden Prairie,” she said, but given her children’s and her own experiences of racism over the years, incident was “not surprising” to her. Hassan encouraged the community to form “coalitions” of parents, teens and police to work toward a more cohesive city.

Panelists and EPHS students Muna Galbayte and Sydney Lewis addressed the seriousness of such racially charged events in the community, saying they happen more often than one might think.

Although no one was injured in the incident, Muna called the incident “gun violence,” saying she can think of “no better terms” for a situation in which “a white man decided it was okay to pull a gun on a group of teens.”

Lewis, of the anti-gun violence group Students Demand Action, noted the importance of the gun in calling the community’s attention to the event. “These events happen in Eden Prairie more frequently than we think,” but without a gun it doesn’t get attention, she said. “I have a moral obligation not to ignore it.”

Panelist Haji Yussuf is an Eden Prairie father of several young children and expressed his fear of gun violence in many community spaces, including schools and places of worship.

“It’s our kids who are dying in schools,” Yussuf said. “It’s our grandparents who are dying in synagogues.” He urged attendees to “connect” the two movements against racism and gun violence and said simple solutions are the way forward, leading the room in a chant of the words “common sense.”

After the panel, attendees used conversation guides provided by organizers to lead discussions about implicit bias and taking action as individuals and as a community. Groups ranging in size from three to ten people and spanning many ages and ethnicities spoke for fifteen minutes, discussing questions like “What does implicit bias mean to you?” and “How do we move forward and educate each other to create a coalition?”

Moderator and EPHS senior Megs Chimata passed a microphone around the room to hear what the groups had discussed. Many EPHS students urged the community to take action beyond the forum and continue to work against racism and gun violence.

“We need more town halls and meetings like these,” said EPHS student Jasmine Carter. “I feel like it’s important to have education for elected officials and educators when they move in minority spaces.”

Student Funmi Banjoko shared her concern that the issue would “blow over” after the forum and the community would lose momentum in its desire for action. “I hate to say it, but when a gun is involved it becomes a hot button issue,” she said.

Eden Prairie resident Nan Nelson directed the conversation back to the restaurant where the incident occurred, asking if anyone from the McDonald’s franchise was present. No one in the crowd responded.

No one representing McDonald’s spoke at the forum, but when contacted, a McDonald’s representative directed Eden Prairie News to the statement by Paul Ostergaard, the owner of the Eden Prairie McDonald’s franchise. In a statement after the incident, Ostergaard wrote, “This incident is not a reflection of the values that we instill in our employees.”

He also wrote that the manager seen yelling at the teens in a video of the incident is no longer employed at the restaurant.

Eden Prairie Police Chief Greg Weber was invited by event organizers and observed the evening from a table in the back of the room. At a Dec. 3 press conference, Hussein thanked EPPD for their quick action in finding and apprehending Johnson.

“Our role is to actively investigate all the facts, which we did,” Weber said.

The anti-gun violence group Moms Demand Action were highly visible at the event, welcoming people and encouraging attendees to sign up for the group. Moms Demand Action, along with Students Demand Action, the Interfaith Circle, Black Lives Matter St. Paul and the Council of Jewish Women, helped organize and run the forum.

“Anything that brings people together in positive conversation is a good thing,” Case said of the event. “There’s a strong enough consensus that we need to continue the conversation.”