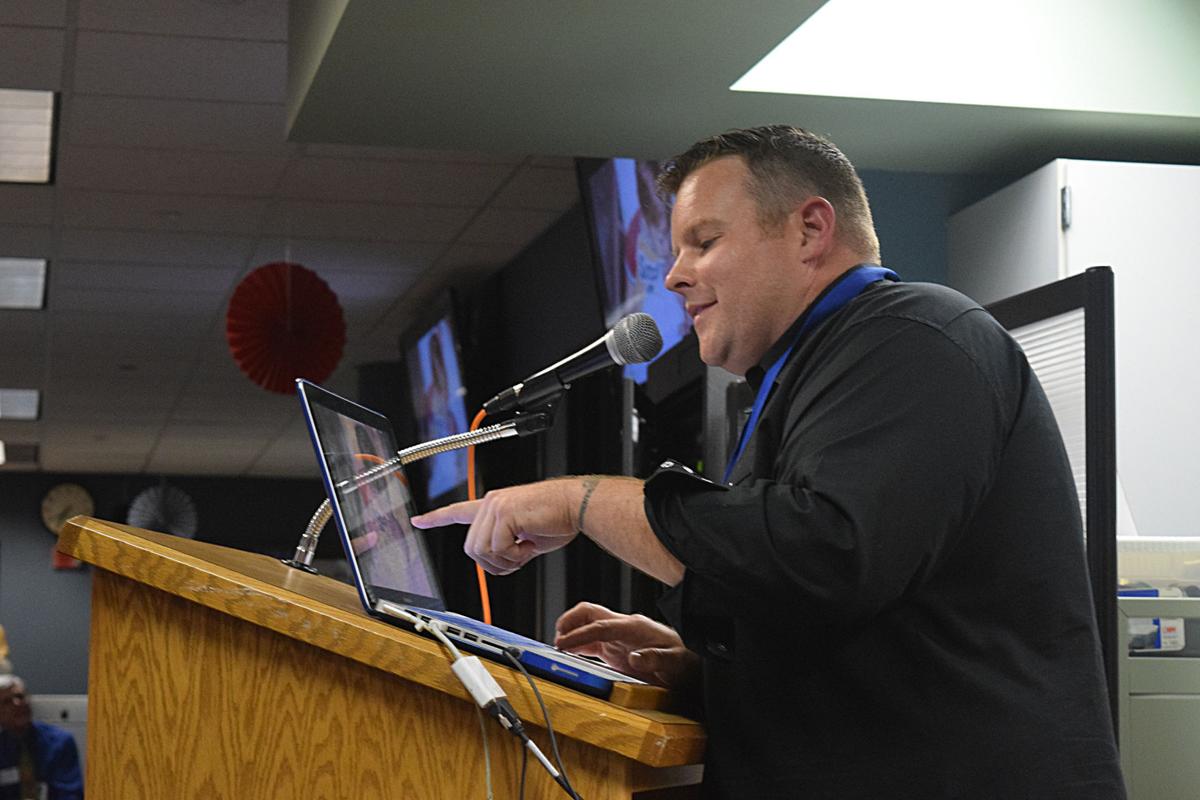 On Monday, Oct. 2, Hollywood actor Adam Bartley sports the medal he won in high school in 1997 for state champion in competitive speech. 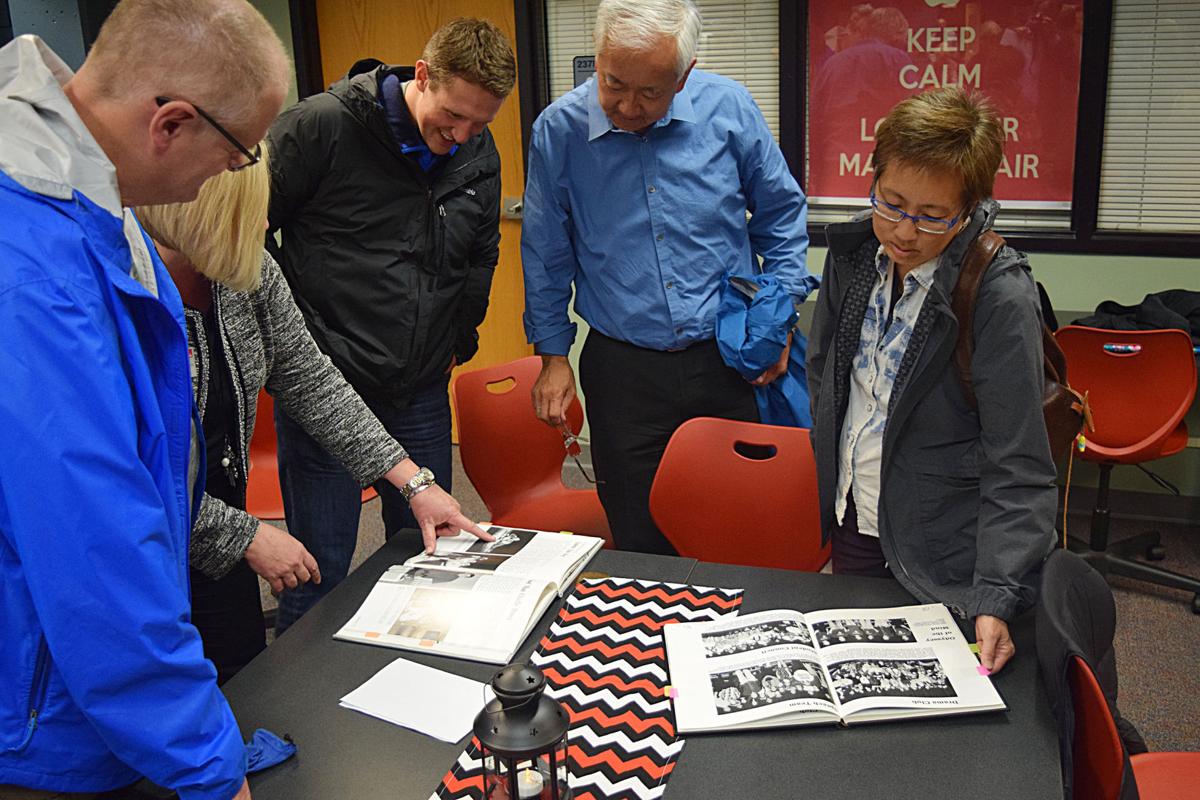 People gather around yearbooks from the 1990s to see photos of Adam Bartley. He spoke at the learning lab by the school library. 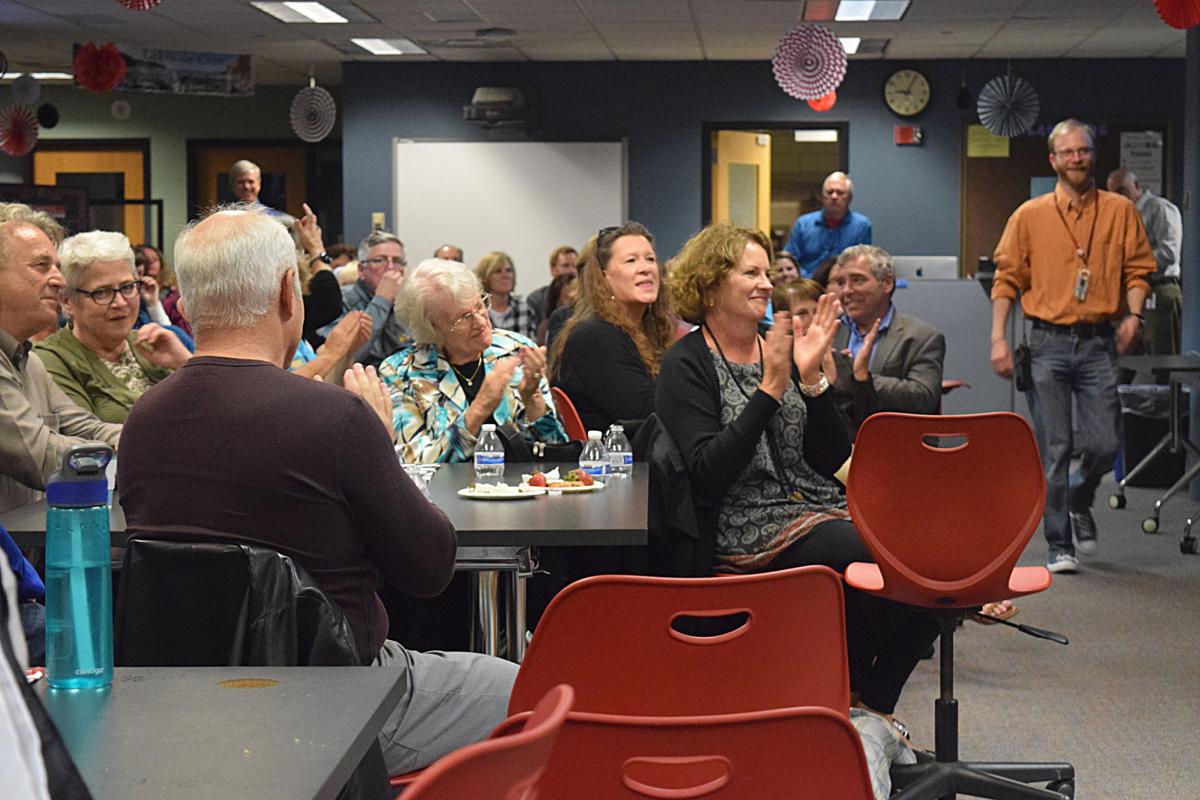 Adam Bartley’s family was present on Monday, Oct. 2, during his talk at Eden Prairie High School. Bartley praised his father, mother and other relatives for their support of his interest in the performing arts. 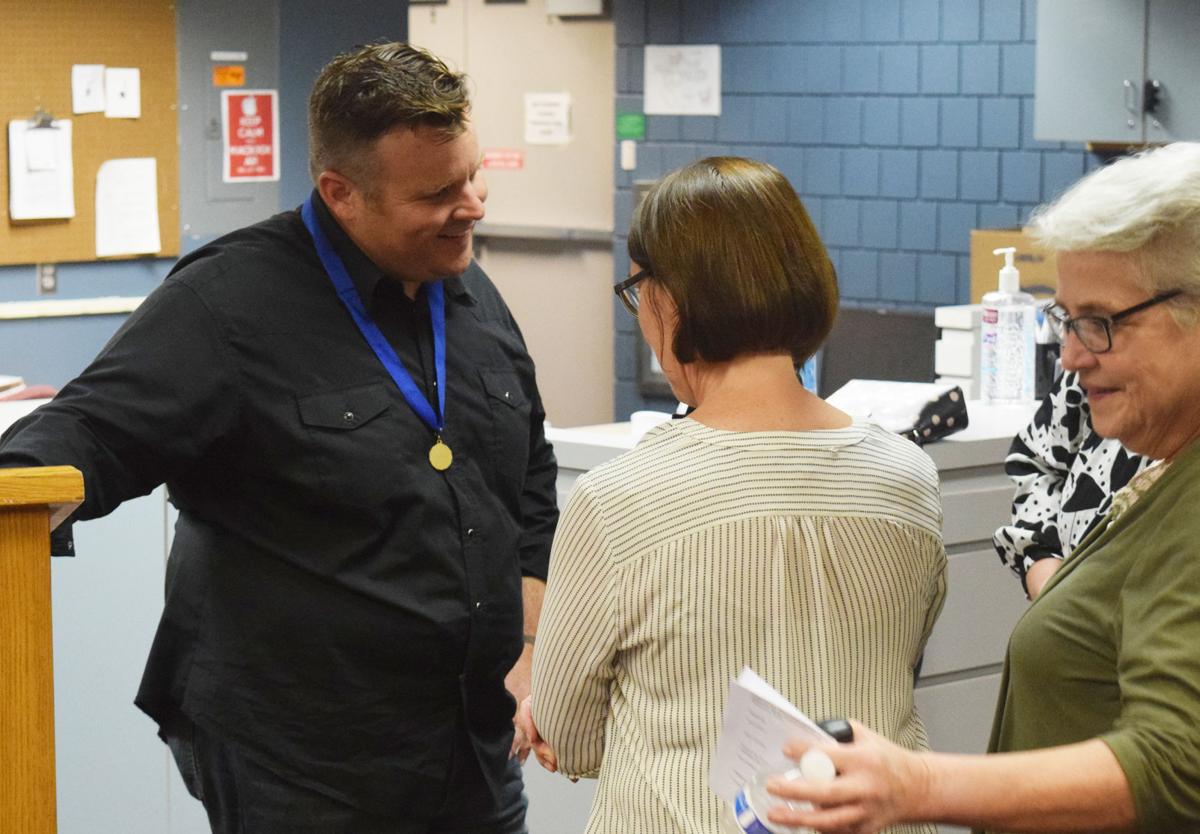 On Monday, Oct. 2, Hollywood actor Adam Bartley sports the medal he won in high school in 1997 for state champion in competitive speech.

Getting dumped made it possible for Adam Bartley to go to Hollywood.

After living in Colorado, New York and Minnesota, the Eden Prairie native son met a woman. They got engaged and pursued a gig singing in Alaska. They drove the Alaskan Highway and lived at Denali National Park. Soon, they drifted apart and socialized less. Finally, she handed him the engagement ring and told him they weren’t the right fit.

On the drive back, he listened to the recording of the book “The Power of Now” by Eckhart Tolle and concluded she had done him a favor by rejecting him.

“I had always dreamed of L.A.,” he told a group of Eden Prairie residents on Tuesday, Oct. 2, at Eden Prairie High School. “Now I can handle no.”

Bartley, 38, is best known for starring as Deputy Jim “The Ferg” Ferguson on Netflix’s “Longmire” show for six seasons and for his appearances as Duke on NBC’s “This Is Us.” He has appeared in many guest roles in shows in Hollywood and now is pursuing his next role.

His comments came as part of the “Beyond the Diploma” series held by the Foundation for Eden Prairie Schools, commonly shortened to FEPS. Bartley graduated from Eden Prairie High School in 1997.

He told of playing football in his youth, and after seventh grade, he discovered the other boys were getting bigger, but he was not. What’s more, players in football try to hurt each other, even in practice against their own teammates.

He told his dad, “I think I am going to kiss the girls on stage instead.”

Bartley had a crush on a girl and auditioned for a play, but he got the part she sought. Still, something clicked on stage. He liked the reaction acting had from his friends and family.

“A light gets in when you find your thing,” he said.

He dived into acting and became overwhelmed with too many commitments. Then it was on to high school, which seemed like a totally foreign place. However, he attended drama camp and got to meet other high school actors and was allowed to fail over and over.

“If you are so afraid not to fail, gosh, you are not going to be able to do anything,” Bartley said.

Thanks to drama camp, he had his circle of friends going into high school.

Choir teacher Julie Kanthak could take 60 emotional teens and bring them to silence with her coolness, he said.

He called English teacher Rolf Olson — who often cast Bartley in productions he directed — “quirky, brilliant and sturdy as a skyscraper.”

He said Olson would teach the actors the context, not just the characters, and he would push them to work harder than they thought they could.

“He got us out of our heads and into our bodies,” Bartley said.

Not as many drama students got to work with social studies teacher Suzie Sime, who directed the one-act plays. She pushed her actors to keep searching.

“She looks into you and sees into your soul,” he said.

He acknowledged state Sen. Steve Cwodzinski, who taught government back in Bartley’s time. His straightforward approach was striking to students but later appreciated.

For competitive speech one year, a new teacher came along. It was Lori Constable. She pushed him to state his junior year, but he lost in the semifinals. His senior year, he and another played daring roles for 1997 high school kids — two gay men. He said Constable was “relentless” in pushing them to be real, not cartoonish. They got first in regionals, then went on to win the state title.

He compared it to sports. He recalled his passion for Dirk Nowitzki of the Dallas Mavericks, the every-season struggles of the Minnesota Vikings and Twins and Kirby Puckett’s classic home run in Game 6 of the World Series.

Bartley applied to one college — Southern Methodist University, one of the top five in the nation for acting — and got in with a scholarship. SMU is in Dallas, and he worked at the arena where the Mavs play.

He went on to the Creede Repertory Theater in Colorado and did political satire in Aspen. He almost got a part in a production of “Into the Woods” on Broadway in New York thanks to Mandy Patinkin, who acted in “The Princess Bride,” but Bartley was replaced at the last moment.

There, he worked at a cancer center as he sought roles, but New York is a tough place. He started and ran a children’s theater company in Colorado for four years and thought it would become his life’s work. His partner made “a brutal move” so he returned to Minnesota, then he went to Creede, Colorado, and that’s where he met the woman who wanted to go to Alaska.

After moving to California at 30, he focused on his dream. He lived in a commune with a rent of $200 a month. It had a shared kitchen, bathrooms, everything. Mom and Dad sent money at times to help out. He would do 10 auditions a day and get 10 rejections. If he would get a call, he didn’t have an agent, which made it difficult to land a big spot.

Finally, a friend, actor and writer Leo Geter, was a writer for a show called “The Closer” and was with people working on “Longmire.” Auditions had supplied the cast for all but one character — a dimwitted deputy. Geter showed them the reels of Bartley, and they liked what they saw.

Bartley was at a grocery store when he got a call from Geter that they wanted him to come audition.

That audition turned out to be a mere formality, as the producers were all smiles through and through. He got the part.

Bartley said the business of acting is all the work actors do to get the parts. Actually acting is the cream on top. He has learned a destination is not the goal. Life is lived in the journey.