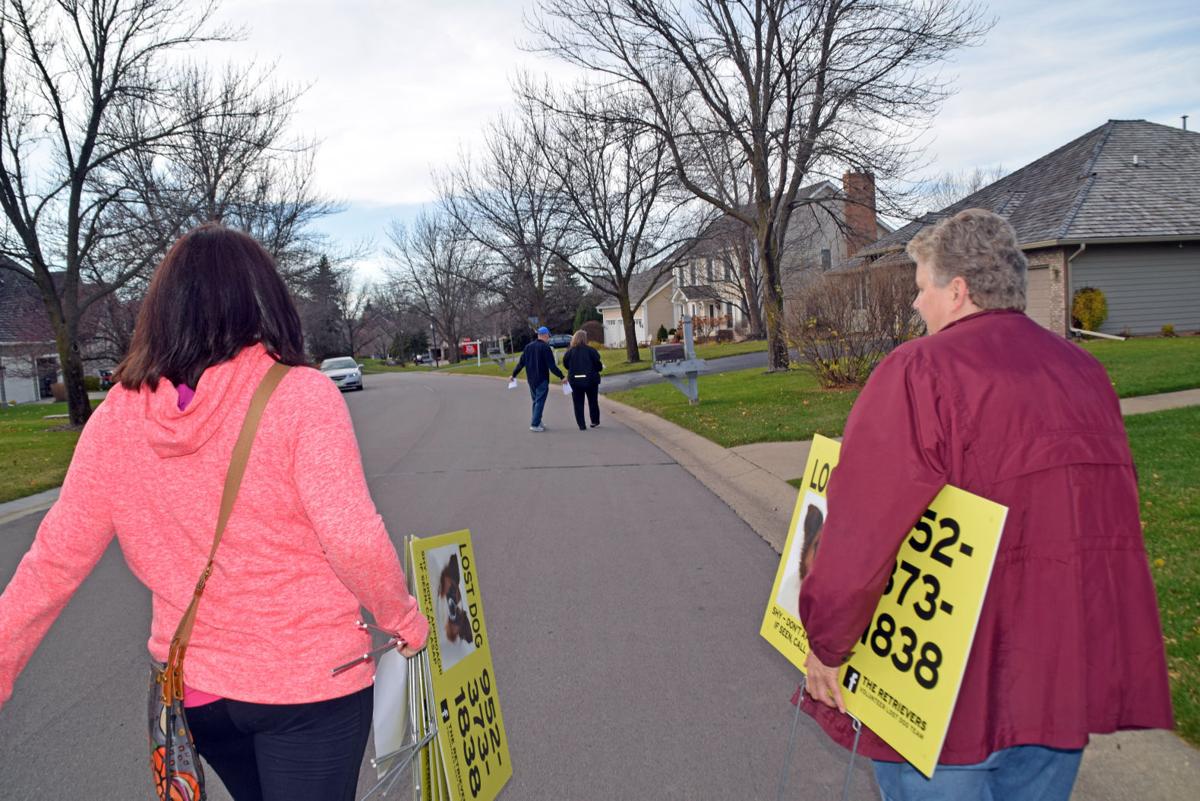 Volunteers put out signs and fliers in the search for Link Saturday. 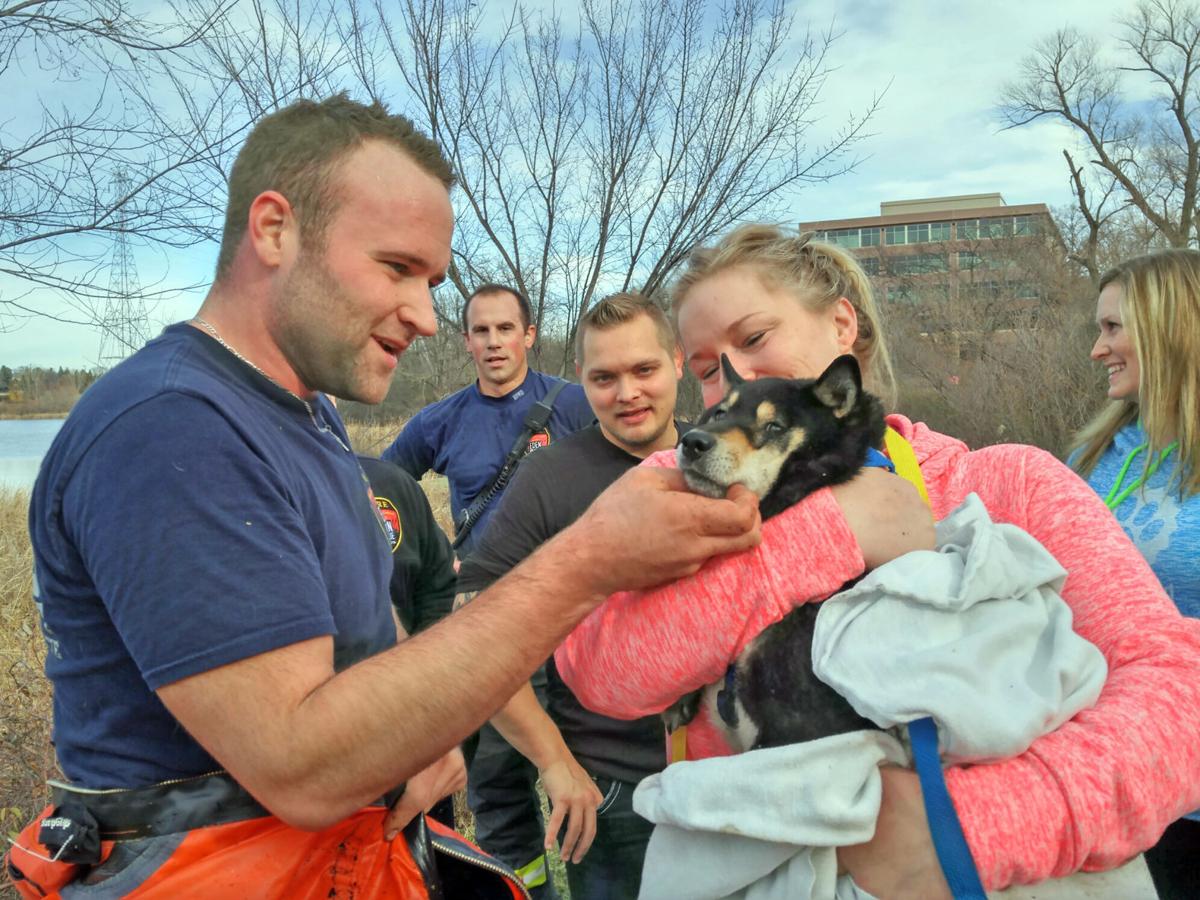 Above — Justin Johnson (front) Matt Adie and Tony Laursen were among those who helped rescue Mister on Saturday. 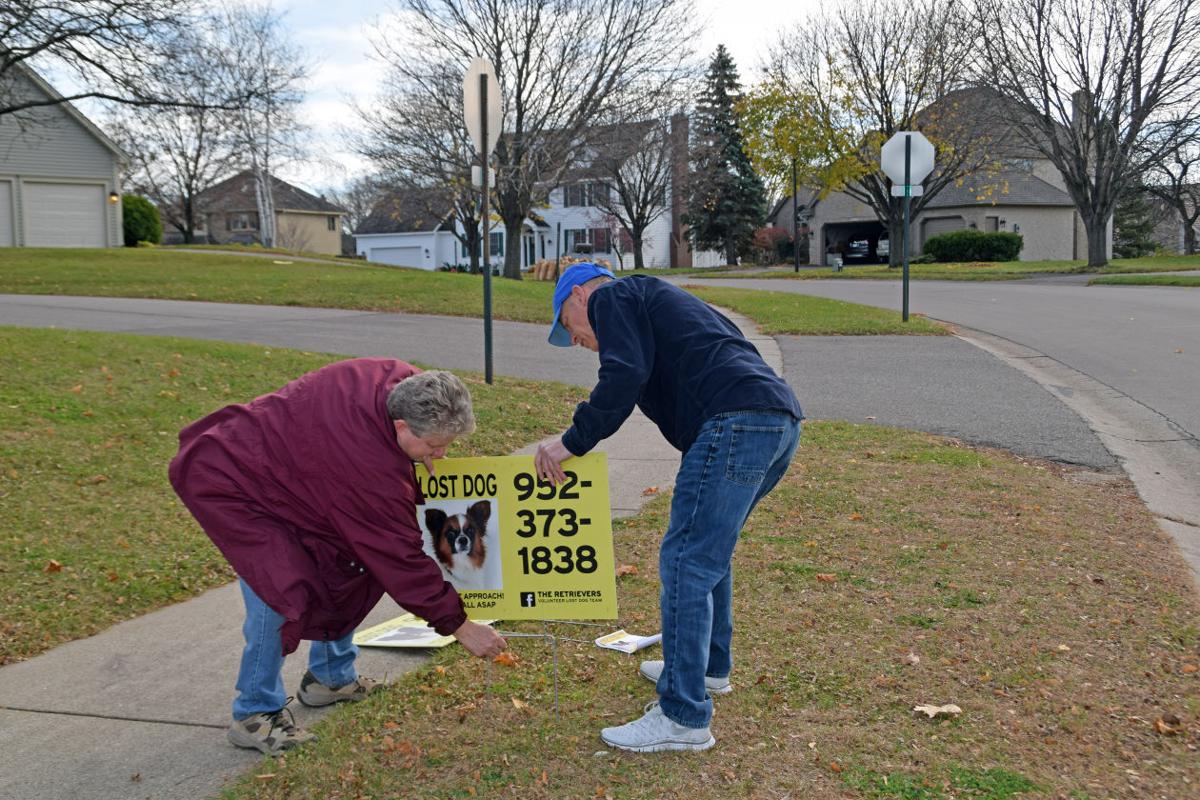 Volunteers Karin Norsten and Steve Stumpf put up a sign to alert neighbors about Link.

Volunteers put out signs and fliers in the search for Link Saturday.

Above — Justin Johnson (front) Matt Adie and Tony Laursen were among those who helped rescue Mister on Saturday.

Volunteers Karin Norsten and Steve Stumpf put up a sign to alert neighbors about Link.

On Saturday in Franlo Park, a group of volunteers was putting up signs and handing out fliers, continuing a search for Link, a papillon mix who had been missing since September.

Across town, a very different situation could be found with Eden Prairie Police and Fire departments helping rescue “Mister,” a Shiba-Inu, from a marshy area along Lake Smetana.

The thing the two situations had in common, was that both dogs were connected to Secondhand Hounds, a nonprofit animal rescue organization that recently opened in Eden Prairie. Link ran away just a few days after he was adopted. Mister ran into the marsh while he was out on a walk.

Times of transition are a prime time that dogs will bolt, according to Devon Thomas Treadwell of The Retrievers, a nonprofit organization founded in Minnesota last year to help find lost dogs. She said it is important for residents to know the best way to deal with a lost dog situation, particularly not to chase a lost dog.

Link’s story would not have a happy ending. Link was found dead Saturday afternoon, with his cause of death unknown.

Missing since Sept. 17, Link had brought a community together to support a search with signs, fliers and even notes on Halloween candy.

Link was adopted from Secondhand Hounds by Kristen and Mike Blankenship. Volunteer Karin Norsten said that the organization saves dogs and other animals from all over the Midwest and beyond.

When he was lost, they contacted the Eden Prairie Police Department and Animal Control. Residents helped to share information about Link on a Facebook page titled “Find Missing Link.” It also resulted in a new Facebook page being created for “Eden Prairie Lost & Found Pets.”

“Since moving here we have noticed how amazing this community is. The past 12 years we lived in oilfield areas and we would never have gotten the response and kindness that we have here. We believe with all our heart that we chose the right place to move to and begin the newest chapter in our lives,” Kristen Blankenship said in a news release.

“We may not have known about Link if the woman [who found him] had not seen one of the new signs that were put out,” said Cindy Bergevin of Eden Prairie, who helped with the search. “Now his family can grieve and begin the process of healing from this profound loss.”

Assistant Eden Prairie Fire Chief Becki White said that the Police and Fire departments responded to a 911 call on Saturday at 12:30 p.m. reporting that Mister was stuck in the swampy area along Lake Smetana.

“They couldn’t retrieve him from the water back toward the shore,” White said.

Eden Prairie firefighters wearing rescue suits found him clinging to the brush on the side of the water.

They were able to pick him up and make their way through the brush to get back.

“He was shivering and freaked out,” White said, but OK.

White said that calling 911 was the right thing to do. The Fire Department has water rescue suits and is prepared to rescue animals in danger.

“This is absolutely the way we want people to handle it,” White said. “Just call 911, and we’ll come out and it’s a much easier way than putting yourselves in danger.

“The weather was great,” she added, “but definitely not good to go for a swim.”

White reminded residents to stay off lakes as the weather gets colder and they start to freeze.

Treadwell, a resident of Faribault who worked on Link’s case, said that the Retrievers is a nonprofit all-volunteer team formed last year to help families find their missing pets, missing dogs in particular.

After starting work with Retrieve a Golden of Minnesota, the team found that they were being asked to help with finding dogs outside that organization.

“We quickly realized we could be more effective if we had our own team,” she said.

Treadwell said that they have innovative methods to help retrieve a dog.

“A dog that’s on its own is at risk,” she said. It could be hit by a car, attacked by other dogs or coyotes, or be stolen.

When a dog leaves the security of its home and resources, it can become very skittish and difficult to catch.

She recommends following the usual steps recommended on the city of Eden Prairie’s website, including posting signs and flyers and notifying the Police Department.

Then, she suggests posting a “Lost dog lives here” sign in your yard, put some food out in the yard as well as a few “scent items,” like its own bedding.

Post the pet’s information with Lost Dogs Minnesota, notify shelters, veterinarians and other agencies, she said.

Don’t approach a dog that is difficult to find because it is skittish.

She said if you find a lost dog, try sitting down with a piece of food and trying to lure the dog to you. Take a photo. If the dog takes off again, call the number on its flier or sign and report the sighting. Note the time and exact location, as well as the direction the dog was going.

The Retrievers have responded to more than 150 cases this year, with various degrees of involvement.

She said that frequently those calls start with “we just adopted the dog,” or “we just took a dog into rescue” or “we were traveling with a dog ...”

Dogs in transition can be nervous, and nervous dogs are more likely to bolt.

“The most important thing for anybody with regard to a lost dog is knowing that a dog in transition is a vulnerable dog,” Treadwell said. “Take extra precautions for the first two to three weeks.”

Don’t let the dog out without a long leash on, until the dog has an opportunity to learn where home is. Keep ID on the dog. Transport dogs in a crate and use a Martingale collar.

“A dog that’s never been lost never has to be found,” she said.