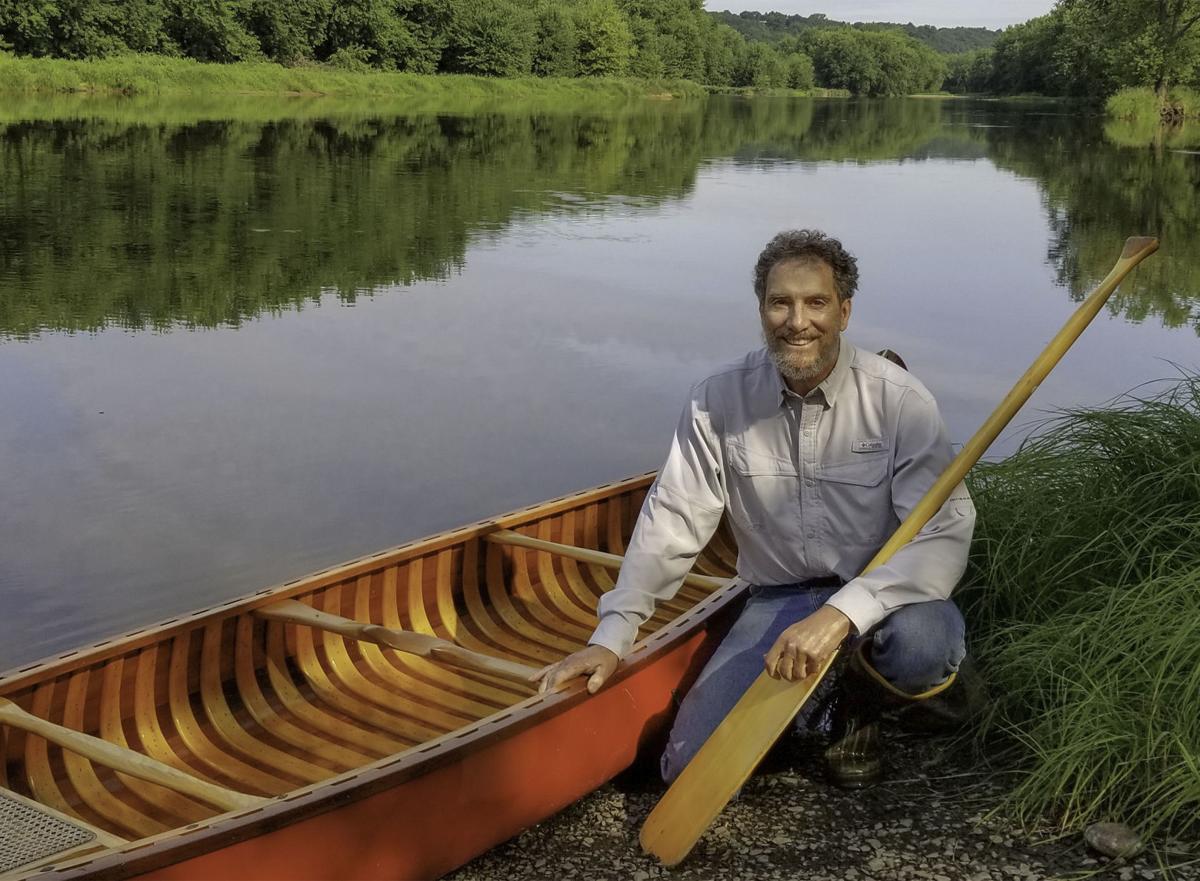 Craig Blacklock crouches by his canoe along the St. Croix River while documenting that waterway along with the Namekagon River for his latest book. 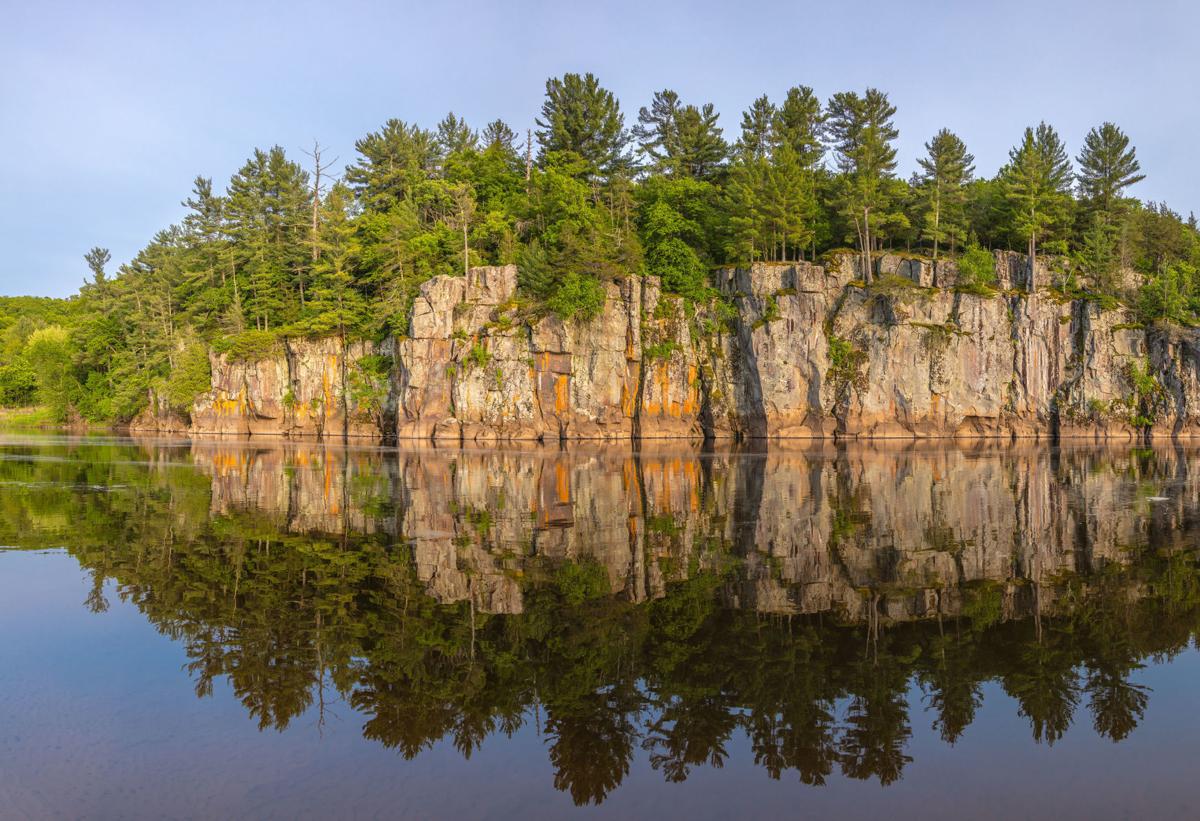 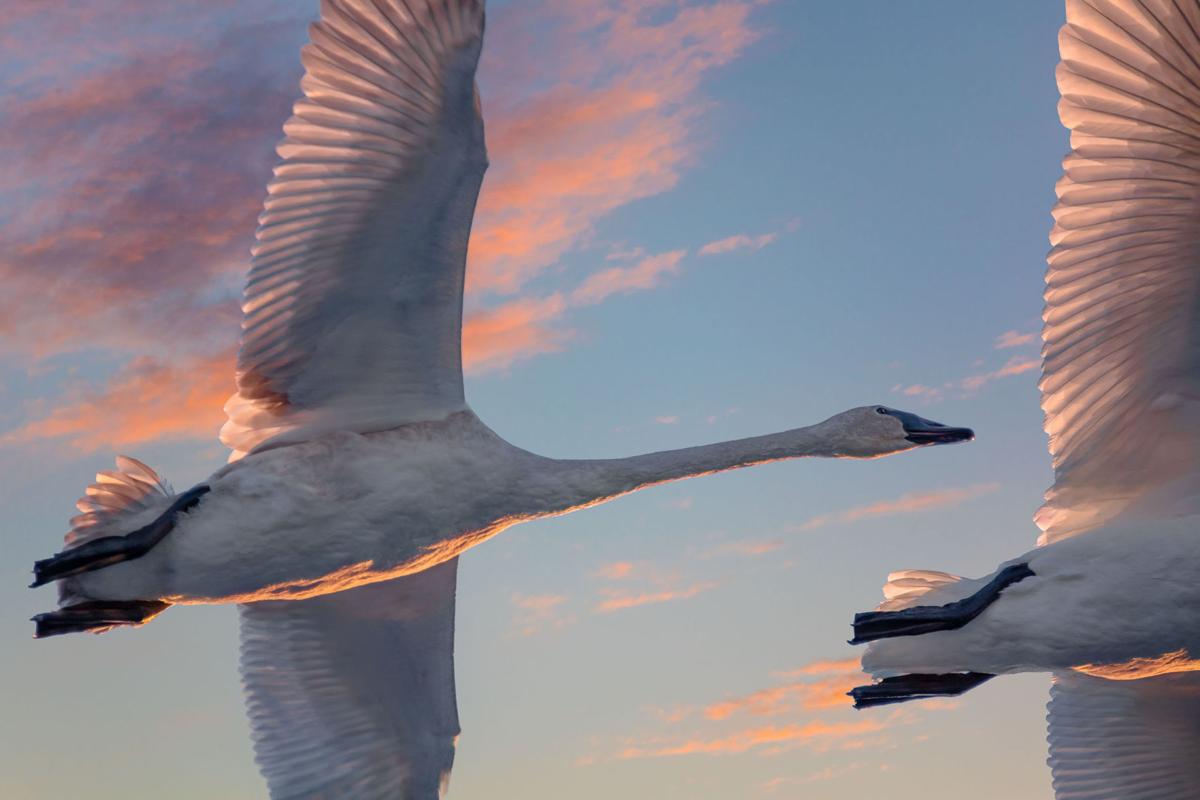 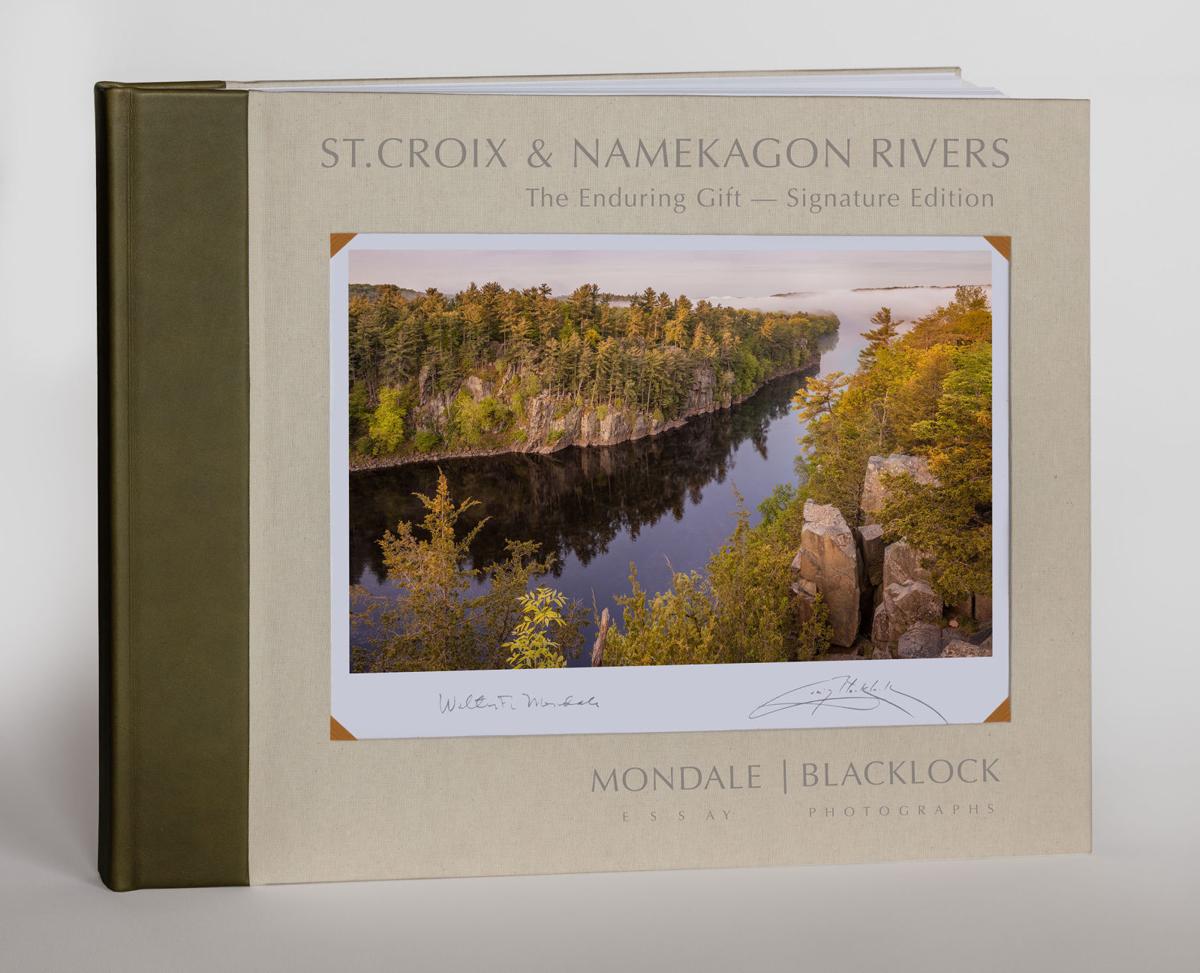 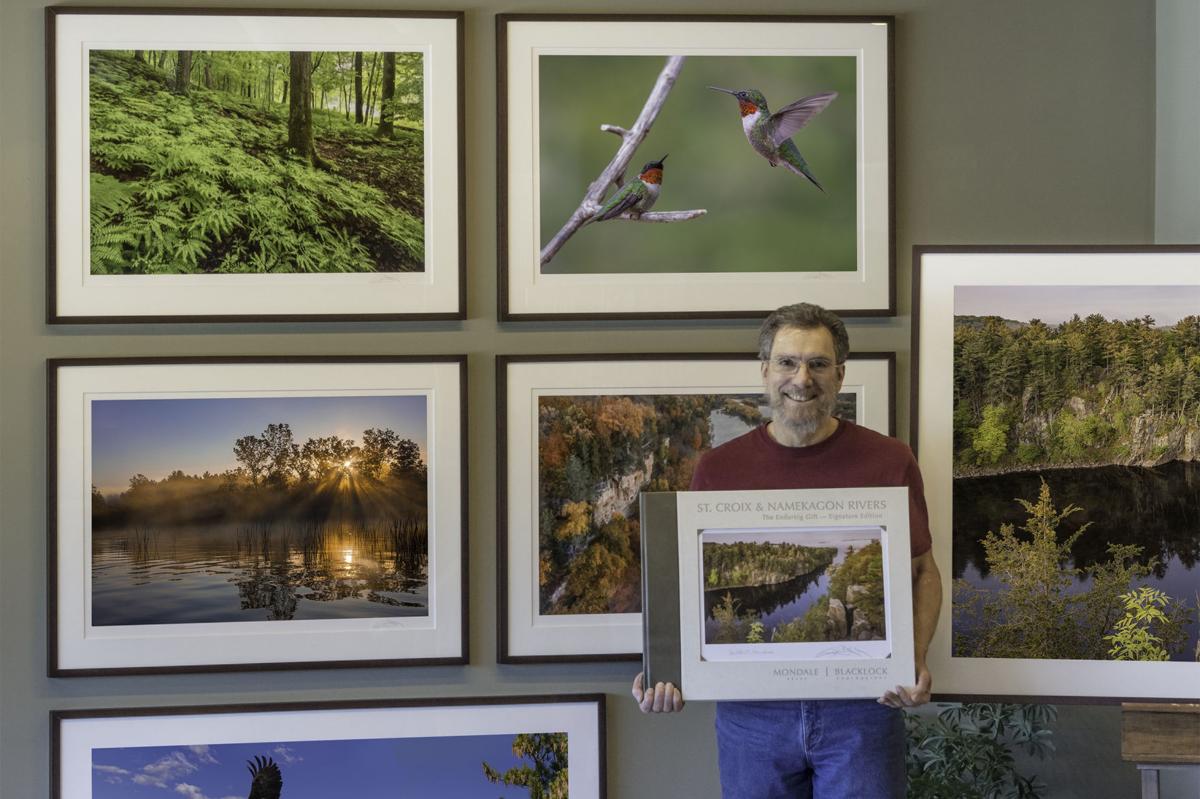 Craig Blacklock stands in his gallery in Moose Lake by several of his prints. 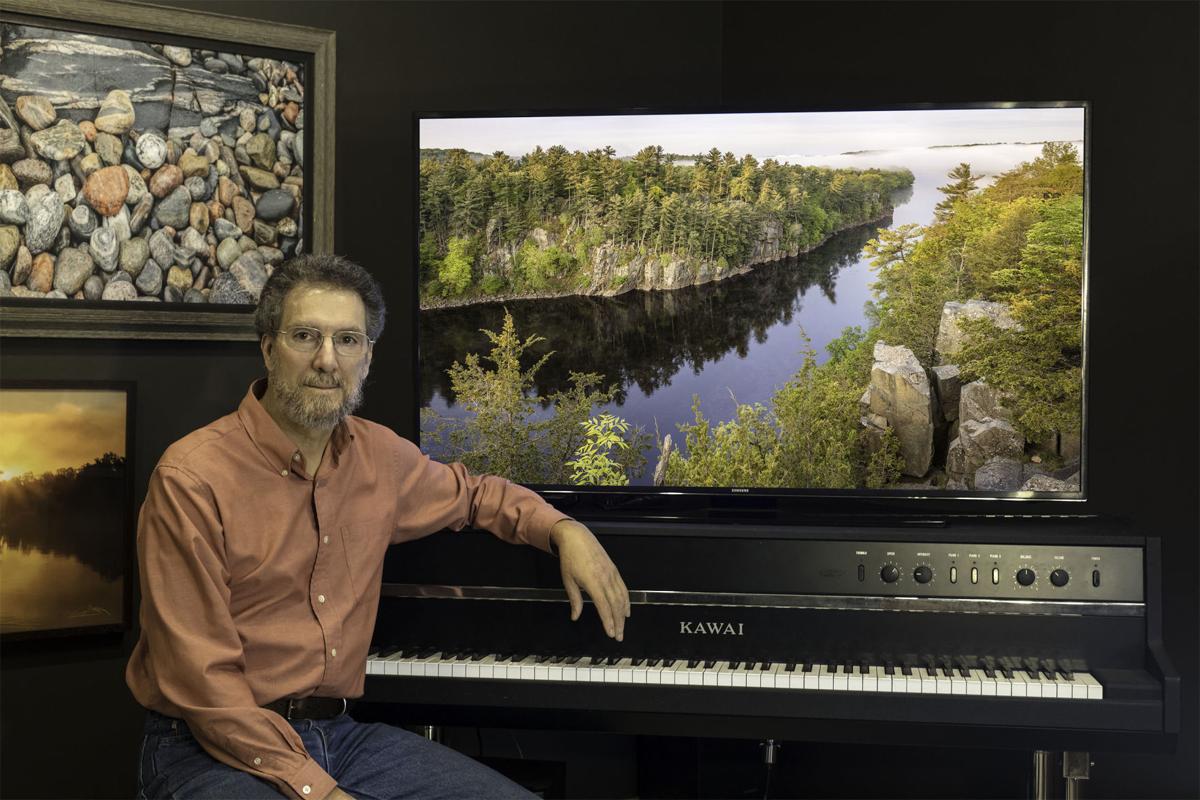 Craig Blacklock poses next to the cover image for his book, “St. Croix & Namekagon Rivers: The Enduring Gift.” 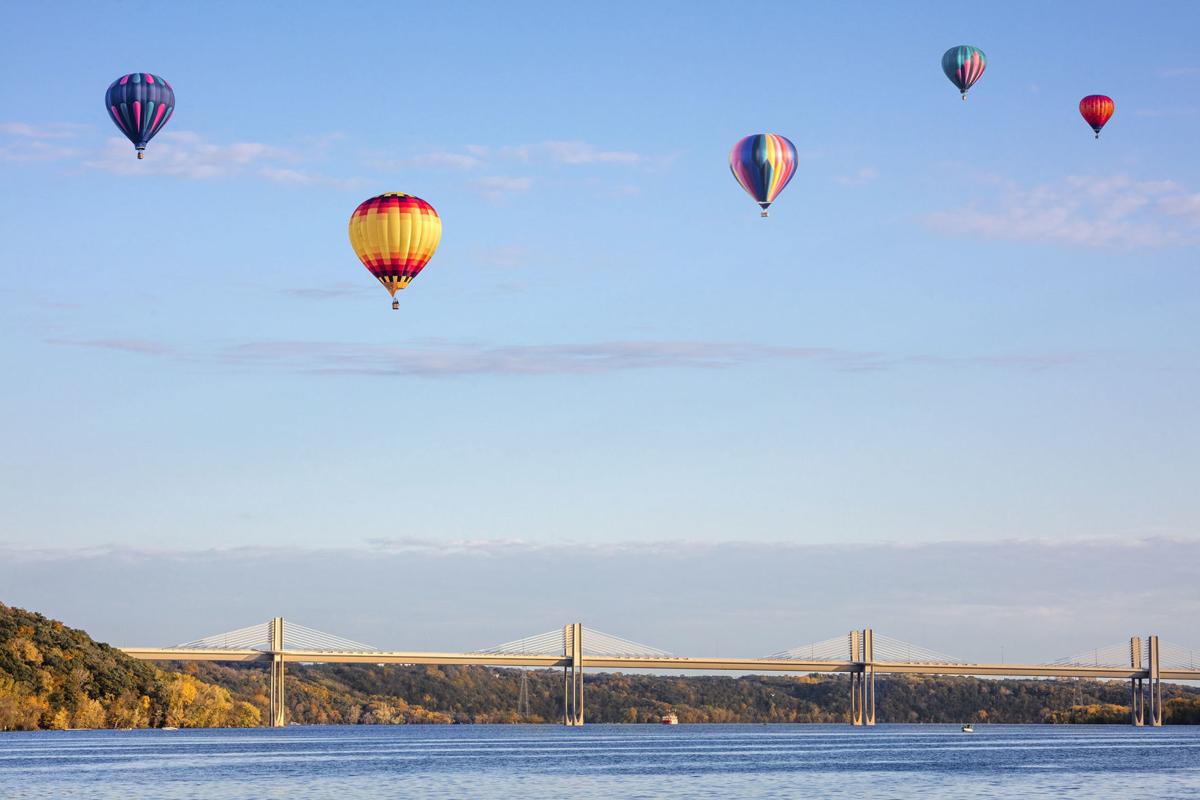 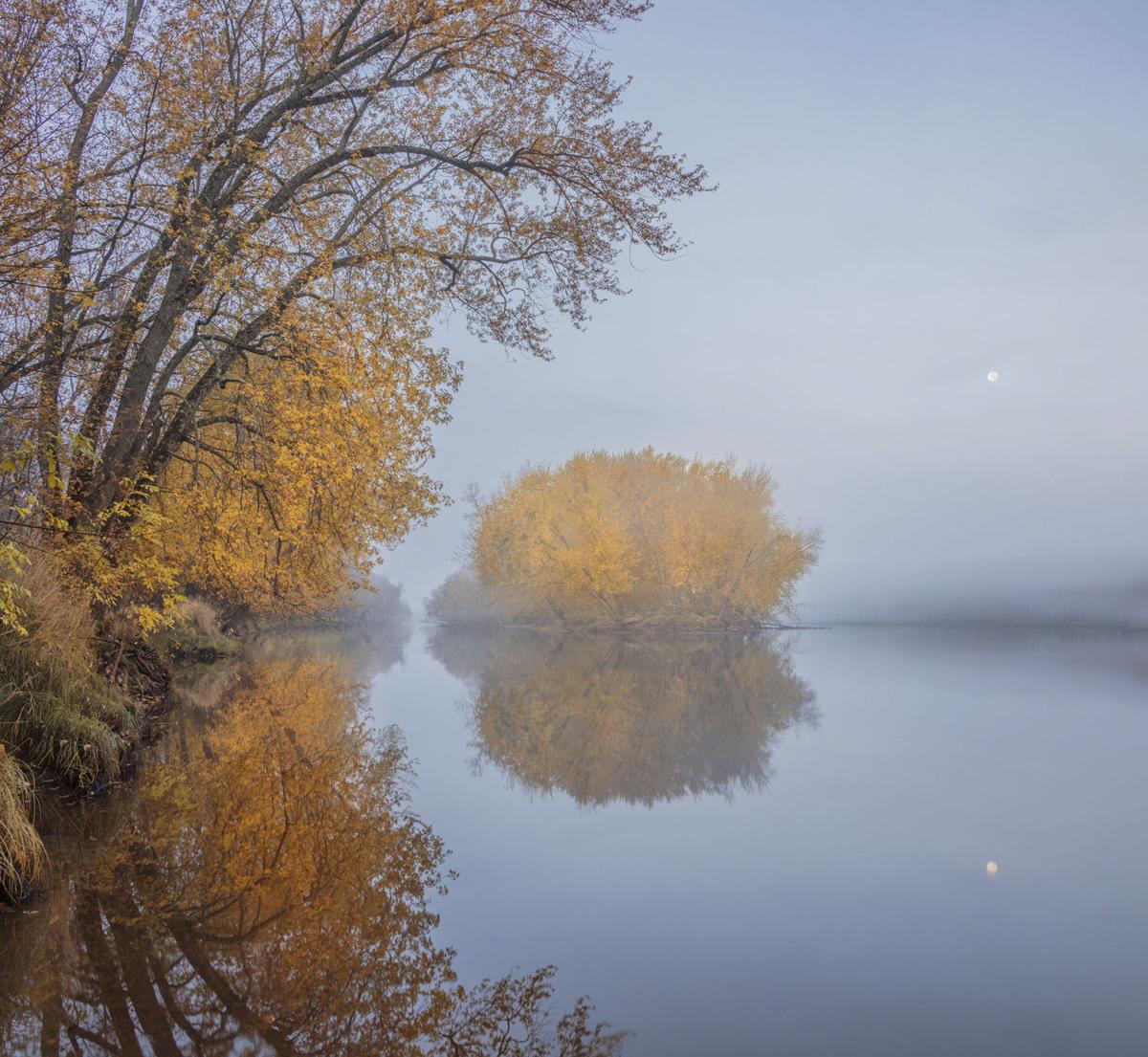 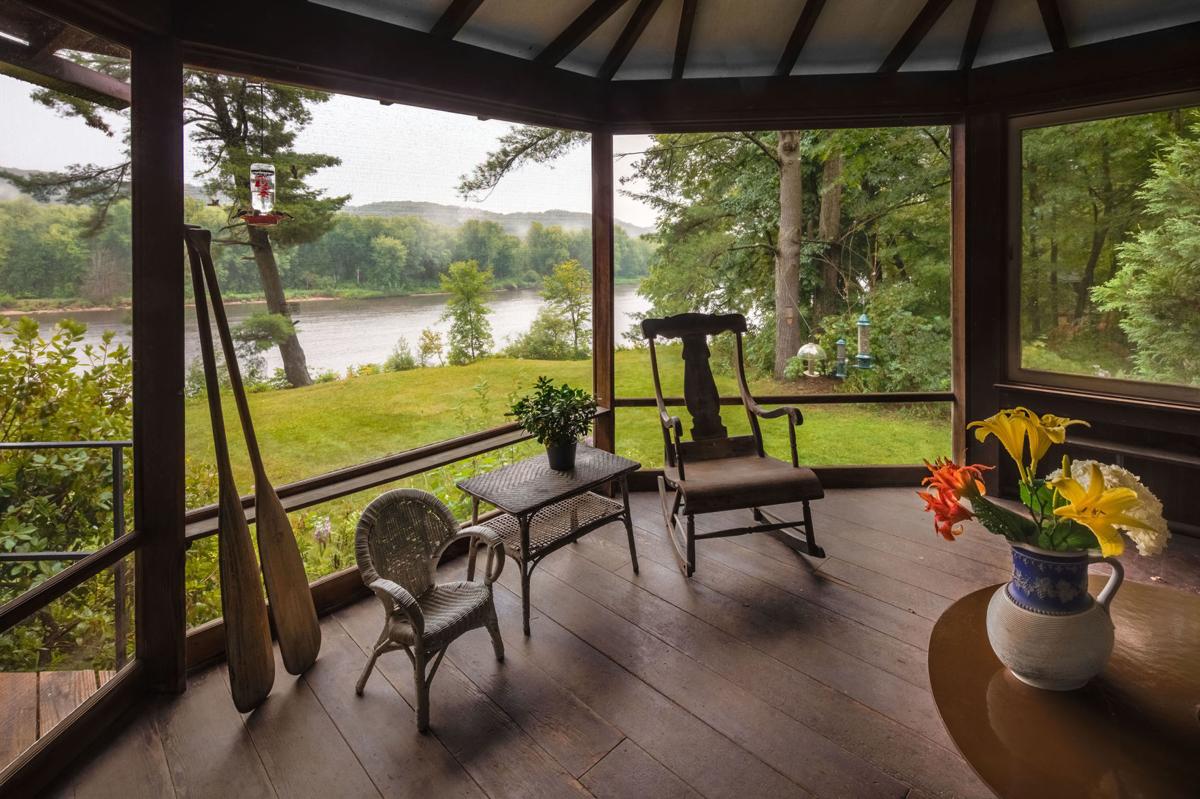 This shot inside a cabin can be found in Craig Blacklock’s latest book, “St. Croix & Namekagon Rivers: The Enduring Gift.” 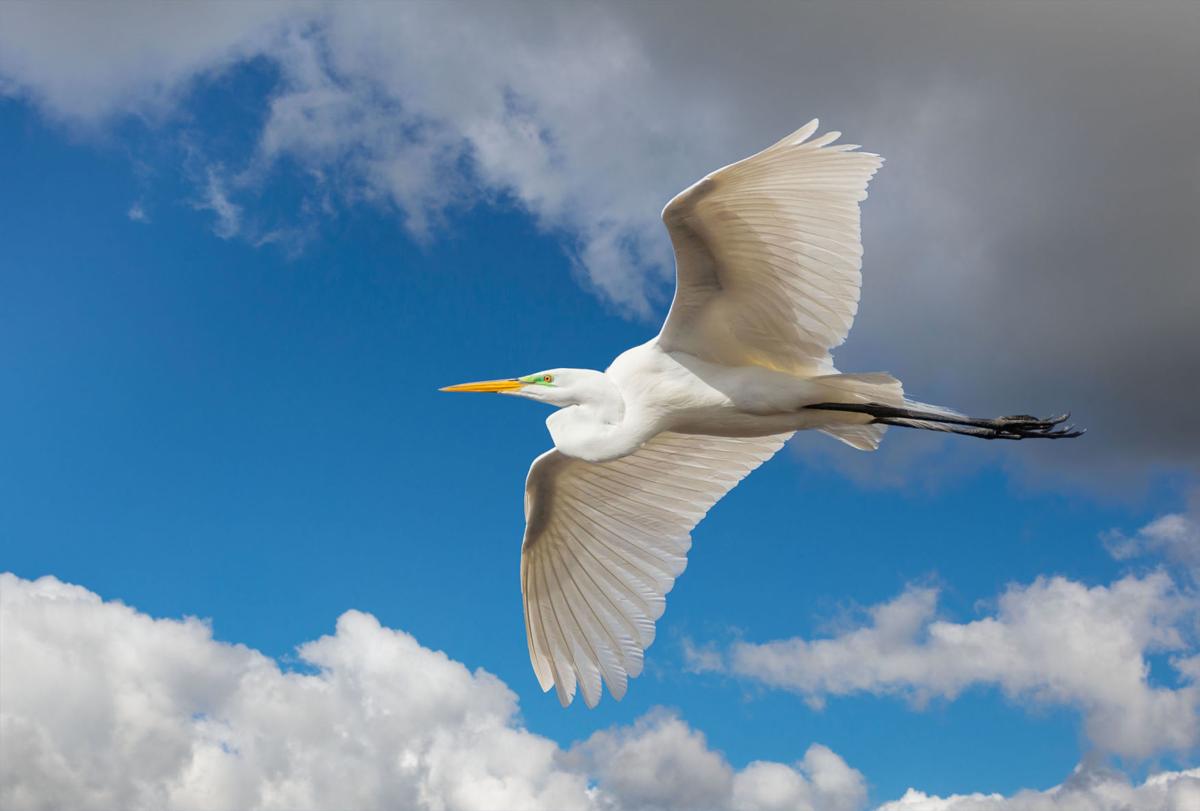 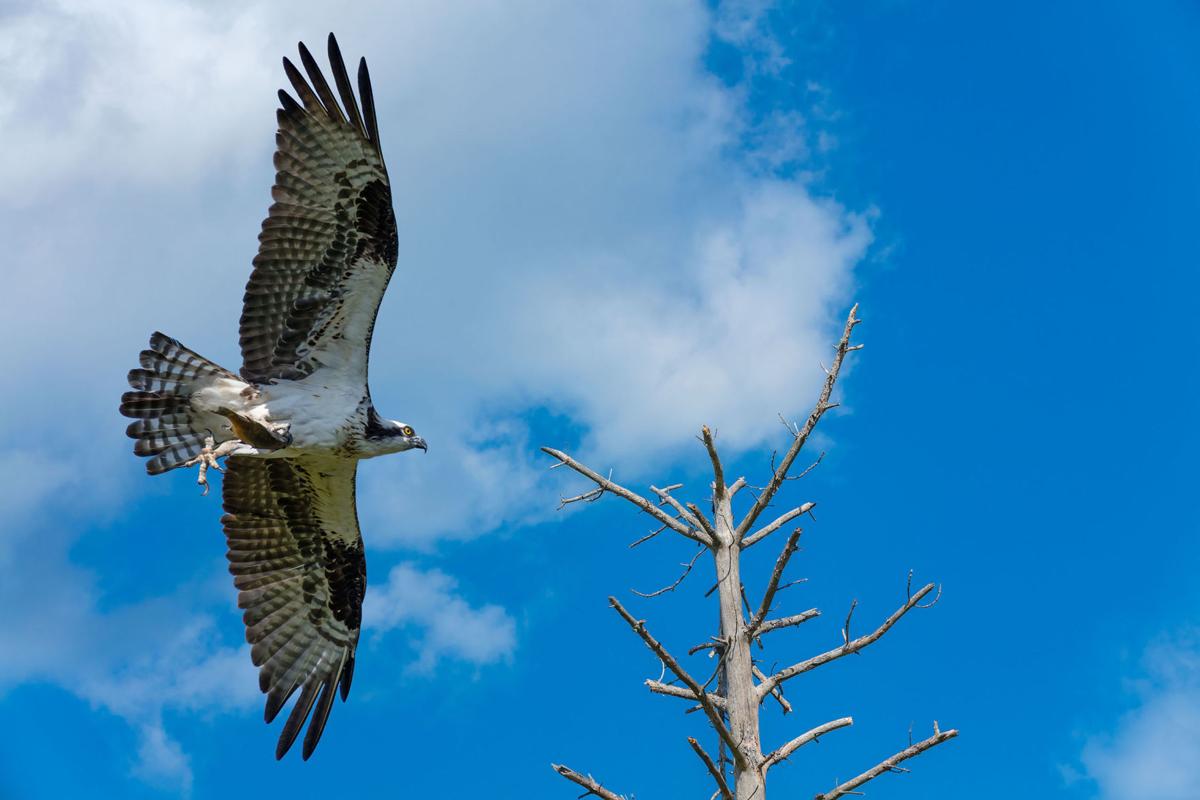 MOOSE LAKE — His family lived on the south side of Northwest Anderson Lake, in what is now the Anderson Lakes Park Reserve thanks to the conservation efforts of his parents. He graduated from Eden Prairie High School in 1972, when the city had about 6,900 people and gravel roads and farm fields were common.

Now Craig Blacklock is a renowned landscape photographer, like his late father, Les Blacklock. Craig has a new book out that celebrates the 50th anniversary of the St. Croix National Scenic Riverway, with an essay from former Vice President Walter Mondale. Mondale was a senator from Minnesota when he shook hands with President Lyndon B. Johnson at the signing of the Wild and Scenic Rivers Act on Oct. 2, 1968, creating the cherished federal riverway.

The Eden Prairie News traveled to Moose Lake to catch up with Craig Blacklock and hear the 63-year-old speak of an Eden Prairie of a prior era.

“Most of Eden Prairie was wild,” he said. “All it had was a Gedney pickle factory and a Mobil gas station.”

Les Blacklock was a pioneer of color nature photography, using the 4x5-format cameras to make large prints and popular calendars. He would work for various Twin Cities corporations, such as Hamm’s Brewery on its Land of Sky Blue Waters campaign.

The father worked with author Sigurd Olson to produce one of the first color coffee-table books printed. Called “The Hidden Forest,” Viking Press published the first edition in 1969. If your family has Minnesota roots, it probably has a copy somewhere.

Meanwhile, his mother, Fran, who hailed from Minneapolis, ran the business from home, led choral groups and served on the Eden Prairie Parks Board. She and Les were instrumental in many environmental causes of the day and, among them, preventing the development of their 160-acre property along Northwest Anderson Lake.

“Some places are simply so special that they need to belong to everybody” was their belief, said Craig Blacklock.

“They had developers showing up almost weekly with a blank check,” he added.

He said his parents fought tooth and nail with officials, seeing the long-term benefit of parks over yet another place for commerce, and eventually the county paid handsomely to preserve it in the mid-1970s, when Les and Fran moved back to his hometown of Moose Lake. The Anderson Lakes Park Reserve today is part of the Three Rivers Park District.

“There is always more room for malls but not greenspace in the metro,” Blacklock said. “He was ahead of his time in knowing where the true value of that land lay.”

By working with consultants Brown & Associates, his father’s photography and ideas led to the preservation of Wood Lake in Richfield. Officials were weighing whether to make it a golf course or a nature preserve, and Les Blacklock documented birds and other animals. His ideas allowed people interact with nature: the first floating boardwalks, blinds for watching creatures and potholes dug out to attract ducks.

After graduation, Craig Blacklock went off to the University of Minnesota-Duluth to major in art. He took photography but found the professors teaching pop art and experimental images.

“Nothing I was learning had anything to do with making a living,” he said.

He dropped out and made a living with pottery. He bought Ansel Adams books and learned more from that and his father than the UMD. He never returned to college, yet today he teaches at the graduate level with the University of Minnesota’s Bakken Center for Spirituality and Healing.

He joined his father’s photography business and did two books together before Les died in 1995. Fran lived on until 2008.

Craig and his first wife, Nadine, published five books jointly. They divorced in 1996 but still worked together. She was killed in a car crash in 1998.

The publishing of “The Lake Superior Images” in 1993 and subsequent years left Blacklock on steady financial ground. Yes, you probably have that book around the family bookshelf somewhere, too.

Blacklock wanted to branch out, and he wanted a subject — a woman — to be in the landscape he loved.

He was friends with kayakers in Duluth. One kayaker was dating a woman named Honey, and they both agreed to model after thinking long and hard about it.

Before the shoot, however, they broke up, so Honey modeled solo. It was her first gig, and she impressed Blacklock so much that he changed his book to have her be the only model in the images.

The project took several years, and Craig and Honey fell in love and got married. In the images, she is seen pregnant and then with their daughter, Charis, who is now 16 and attends Moose Lake High School.

Their age difference — Honey is 45; Craig is 63 — does not matter. What matters is their love for the environment.

The Blacklocks operate a studio in Moose Lake, sharing their space with a Andy Danielson’s frame business. The studio opened in 2001, and tourists stop in to view and buy art. If they need it framed, Danielson is right there.

Blacklock has many other books. Among them are Apostle Islands, Pictured Rocks, Gooseberry Falls, horizons and canyons.

In the film era, like his father, Blacklock used 4x5 cameras, but in the digital age, he mainly uses a Canon EOS 5DS R 50 megapixel digital-single-lens-reflex camera with the capability to tilt the lens — and he has numerous lenses. He noted it was funny how prices for digital cameras went down as their capacity and quality increased. The early ones struggled to compete with the quality of film to capture the proper lighting.

Blacklock has very few connections to Eden Prairie these days. He came back seven or eight years ago to deliver some prints to friends in Chanhassen. U.S. Highway 169 is now a freeway, not a two-lane road with a single car per hour.

“All the buildings I knew are gone, but I do recognize some of the trees,” he said.

Growing up in the wilds of Eden, he acknowledged, influenced his ties with nature, along with having Les and Fran as parents.

In May, the Arrowhead Regional Arts Council will award Blacklock the George Morrison Artist Award for his lifetime of work in landscape photography. Morrison, who died in 2000, was an internationally acclaimed abstract artist who was a member of the Grand Portage Chippewa.

“I took a sculpture class from him as a teenager — in Eden Prairie,” Blacklock said.

Details: Guests are invited to browse the photo exhibit showcasing prints from the book while enjoying wine and hors d'oeuvres beginning at 6 p.m. At 7 p.m., Craig Blacklock will lead a short program with people instrumental in crafting this work of art. The exhibit runs from April 12 through June 24.

Details: The documentary features many photographs by Craig Blacklock. In addition to the gathering at The Fitz, the film is set to debut on TPT (Twin Cities Public Television) and WPT (Wisconsin Public Television) in June 2018. Watch listings for times.