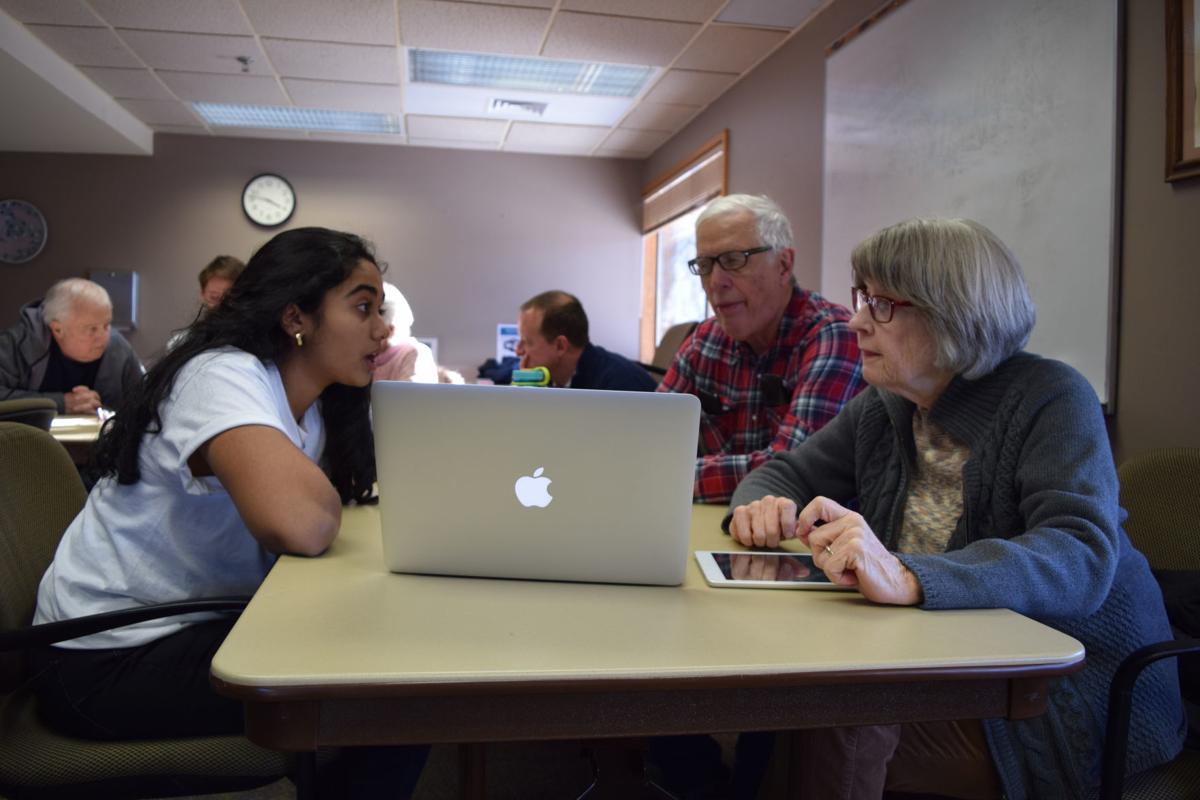 Thanya Reddy, left, explains a feature of the Mail application to Richard and Pat Hanson at the Seniors Get Social technology class at the Eden Prairie Senior Center. 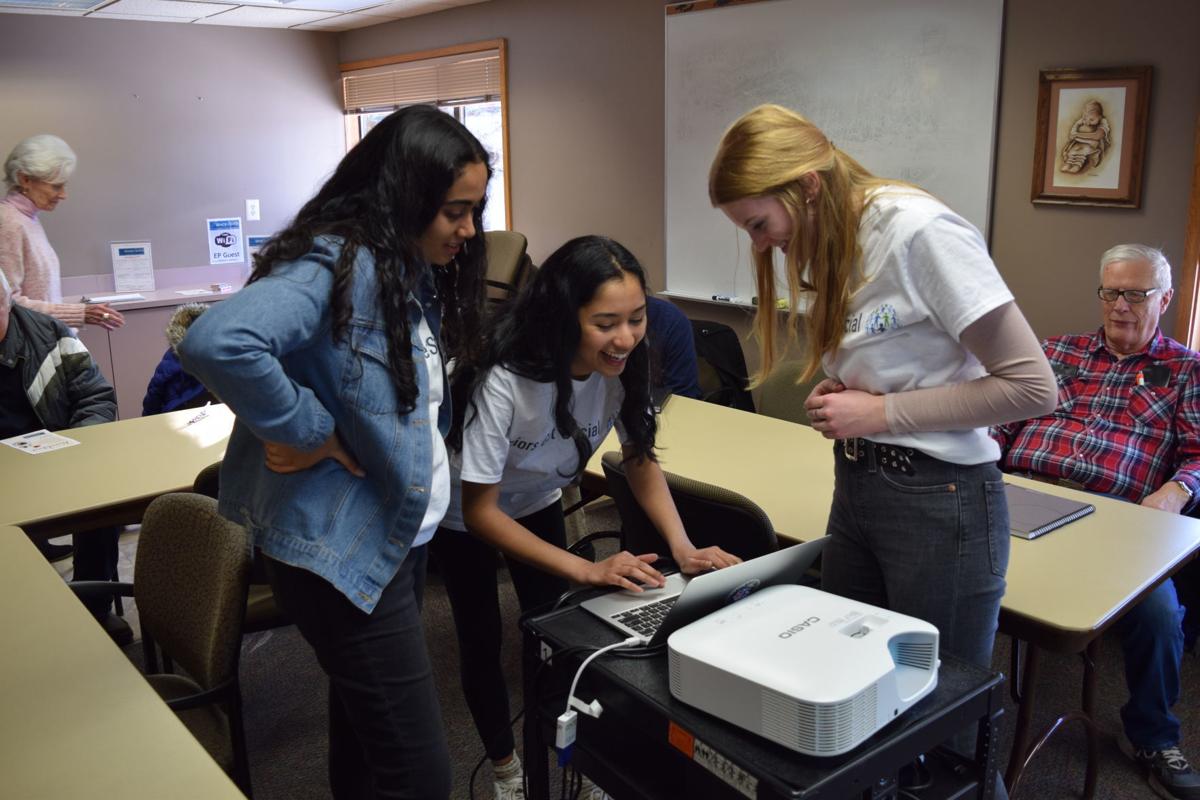 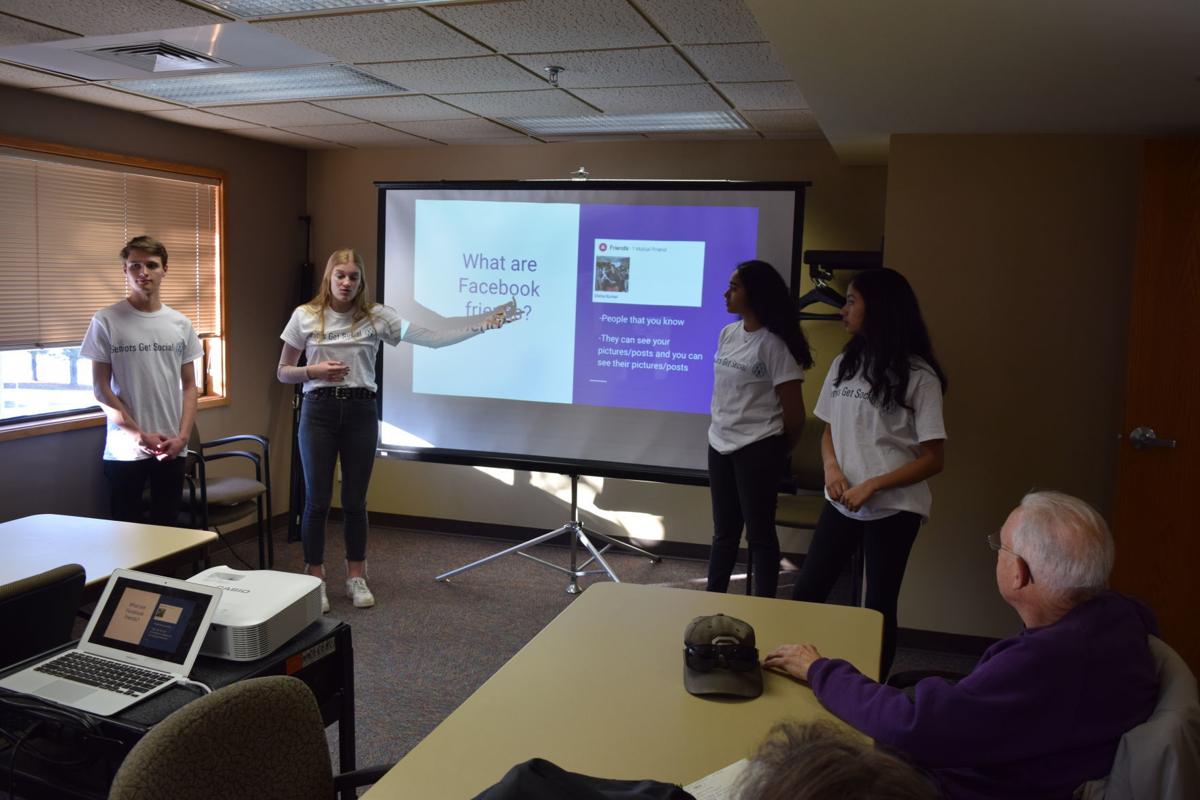 From left, Jake Freeland, Lydia Humphrey, Thanya Reddy and Sumi Seethamraju describe the components of a Facebook profile for a technology class at the Eden Prairie Senior Center. 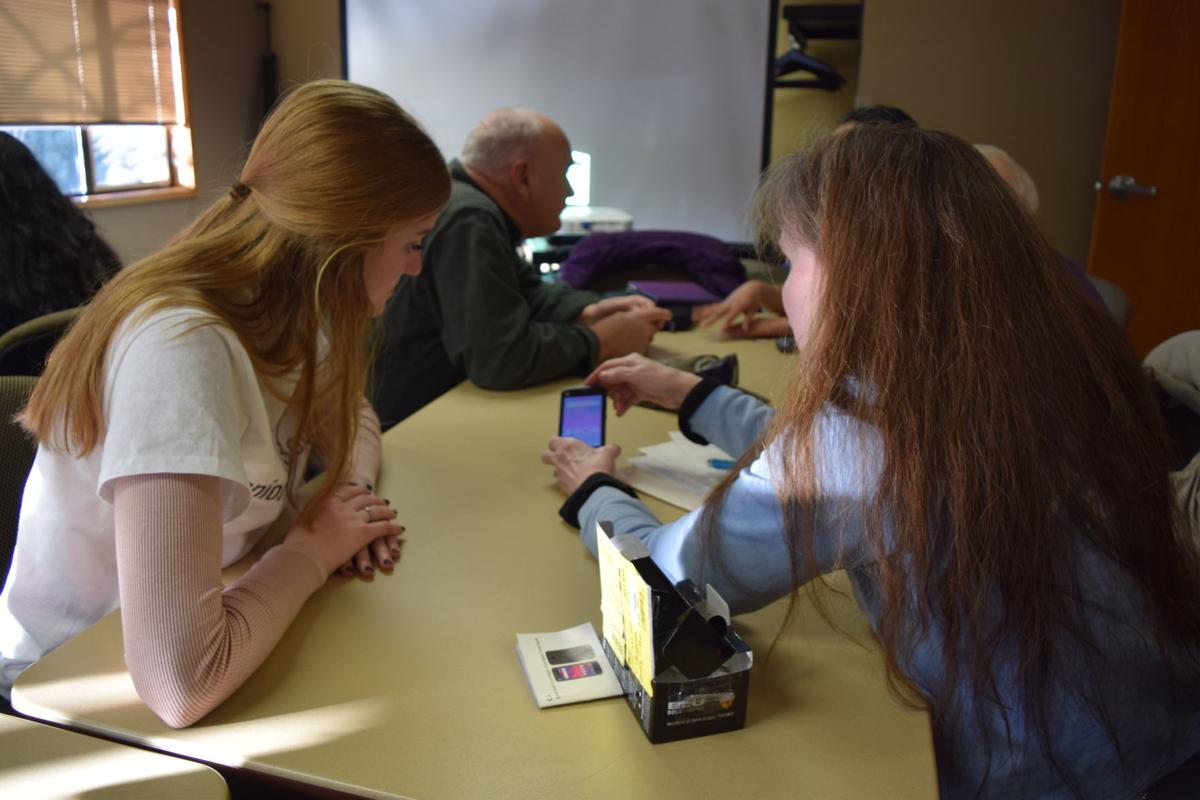 Lydia Humphrey helps Jenner with a feature on her smart phone at the Seniors Get Social technology class on Feb. 5. 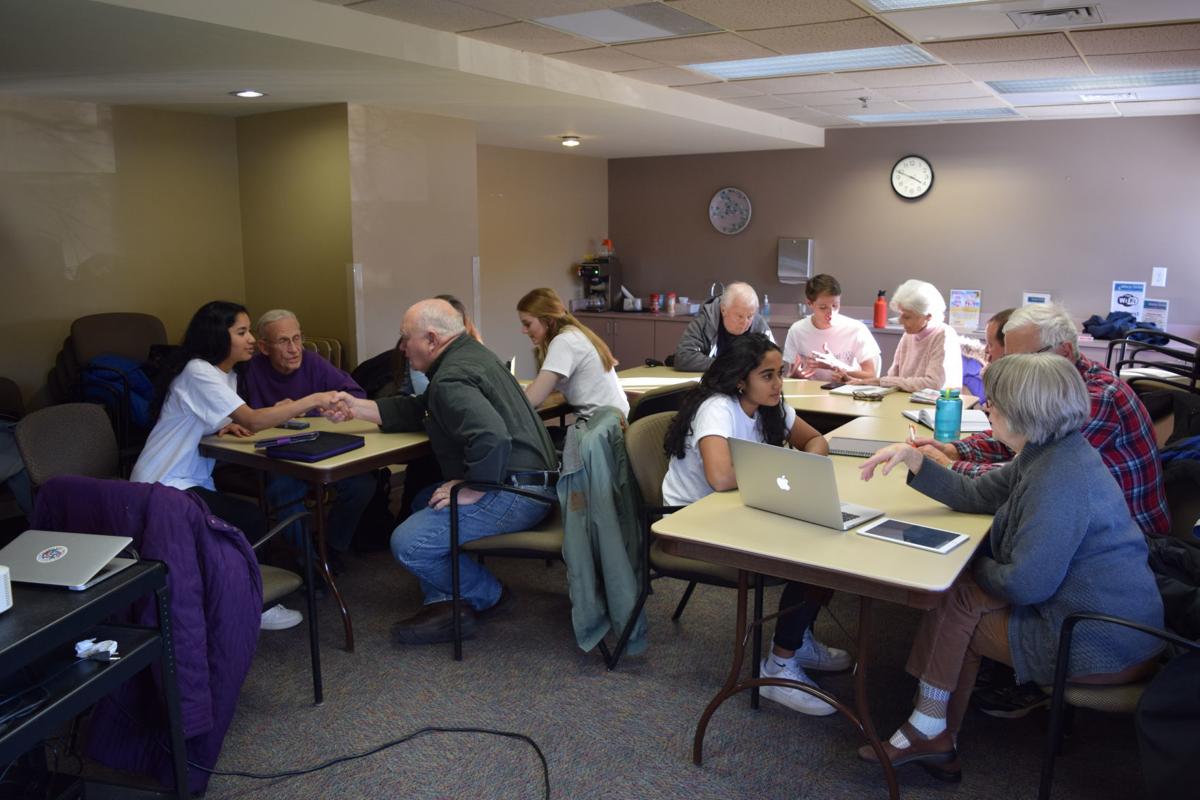 The Seniors Get Social class at the Eden Prairie Senior Center begins with a group presentation and transitions into one-on-one time as Eden Prairie High School volunteers help seniors troubleshoot their technology.

Thanya Reddy, left, explains a feature of the Mail application to Richard and Pat Hanson at the Seniors Get Social technology class at the Eden Prairie Senior Center.

From left, Jake Freeland, Lydia Humphrey, Thanya Reddy and Sumi Seethamraju describe the components of a Facebook profile for a technology class at the Eden Prairie Senior Center.

Lydia Humphrey helps Jenner with a feature on her smart phone at the Seniors Get Social technology class on Feb. 5.

The Seniors Get Social class at the Eden Prairie Senior Center begins with a group presentation and transitions into one-on-one time as Eden Prairie High School volunteers help seniors troubleshoot their technology.

As slick and powerful as smart phones are today, they don’t always make life easier.

“I think technology is such a big pain,” the 78-year-old said. “There’s good things about it but bad things too.”

Still, apps like WhatsApp are helpful to communicate with their daughter who lives in Italy, so he and his wife, Pat Hanson, turned to Seniors Get Social and the four high school students who run it for help troubleshooting their iPad and Mac computer.

Sumana (Sumi) Seethamraju, a senior at Eden Prairie High School, founded the group when she approached the Eden Prairie Senior Center last July about starting a technology class for older adults. She didn’t realize just how perfect her timing was until Sue Bohnsack, the Senior Center supervisor, told her the previous technology class had been canceled after its leader dropped out.

“It was kind of like it was destiny,” said Seethamraju.

She and three Eden Prairie High School juniors − Lydia Humphrey, Thanya Reddy and Jake Freeland − started teaching monthly classes in September and have been surprised by the level of interest and engagement they’ve received, she said. They expected around three or four people to show up to the first one, but found themselves standing before 10 eager seniors when they started their presentation.

“It doesn’t really feel like work because it’s more of a discussion,” Seethamraju reflected. “It really helps to bridge our generation with the older generation.”

The feeling is mutual. Michele Schiebel, of Chanhassen, attended the Feb. 5 class to figure out how she can move her 1,500 photos into albums on her iPad and was pleased with the help she received.

“It’s been very informative,” said Schiebel, 87. “These young people are so smart, and they’re patient − and they talk loud enough for me to hear,” she laughed.

Reddy doesn’t consider herself a tech whiz, and Humphrey admits she’s more familiar with Apple products than PCs, but they’re happy their baseline knowledge from being a Gen Z-er is enough to help.

“It’s always nice to help people with knowledge you already have,” Reddy reflected.

While the seniors in this class are open about needing help with technology, it’s important not to generalize the belief that all older adults are bewildered by the digital era, warned Julia Roles, communications director of the Metropolitan Area Agency on Aging.

“It’s surely not safe to assume an older adult is not tech savvy,” she said. She noted that around 63% of adults over age 65 have a smart phone, and that number is growing as technology becomes more entrenched in daily life.

Still, Roles has met her share of older adults who first encountered computers decades ago, when the technology was bulkier, slower and harder to understand, and she thinks that’s contributing to some seniors’ reticence in using today’s devices.

“The new technology is probably so much easier than someone’s first experience with technology,” she said. “I think some of it is dealing with peoples’ preconceived notions based on experiences.”

Being digitally literate is important for more than posting selfies as increasingly, information and access to programs like Social Security and Medicare are moving online.

“Being able to interface with technology is going to be really important to getting connected and getting the resources you need,” Roles said.

At Seniors Get Social, volunteers address fun and serious questions with equal gravity. Humphrey helped one attendee hide irrelevant ads on his social media, while Freeland talked about facial recognition technology with John Rasmussen, 81, who’d heard about its potential privacy violations on a news broadcast. Rasmussen, who attended the class with Mary Green, was glad to have a digital native’s help with a new smart phone that he and Green had been struggling with, he said.

“She curses it just like she curses the computer,” Rasmussen chuckled.

The class begins with a brief presentation before moving to one-on-one assistance. On Feb. 5, the topic was Facebook, and the teens shared the basic components of a profile: a photo, what a status update is, and who can see what you’re posting.

But the volunteers wrapped up the presentation quickly and transitioned to one-on-one assistance, which is the meat of the hour-long class. With four volunteers and seven attendees, everyone got the help they need, but Seethamraju is keeping an eye on the future as more people attend the class. She’ll graduate this year and hand the reins to Reddy and Humphrey, who hope to have a table at the high school’s activity fair next October to find more volunteers.

“As it grows bigger, we need volunteers,” Humphrey said.

“We need a lot more people on our side if we want this to be a good experience,” Seethamraju added. “I can tell sometimes it discourages people coming back when you don’t have that one-on-one.”

While the class’s stated purpose is untangling seniors’ technology problems, everyone involved has felt the warmth of the inter-generational understanding that the students and seniors are forging. As they explain Apple Pay and Twitter, the volunteers are showing the seniors a new perspective on technology, both its risks and rewards.

“We understand it but we’re not scared of it,” Humphrey said.

“It’s about taking those measures to be safe on social media,” Seethamraju agreed.

Bohnsack sees a broader connection, too.

“It’s making both sides understand each other,” Bohnsack said. “Kids are knowing that seniors are a live part of our community.”

If you go: Seniors Get Social

Seniors Get Social classes are held on the first and third Wednesday of each month, at 3:30 p.m. on the upper level of the Eden Prairie Senior Center, 8950 Eden Prairie Road.