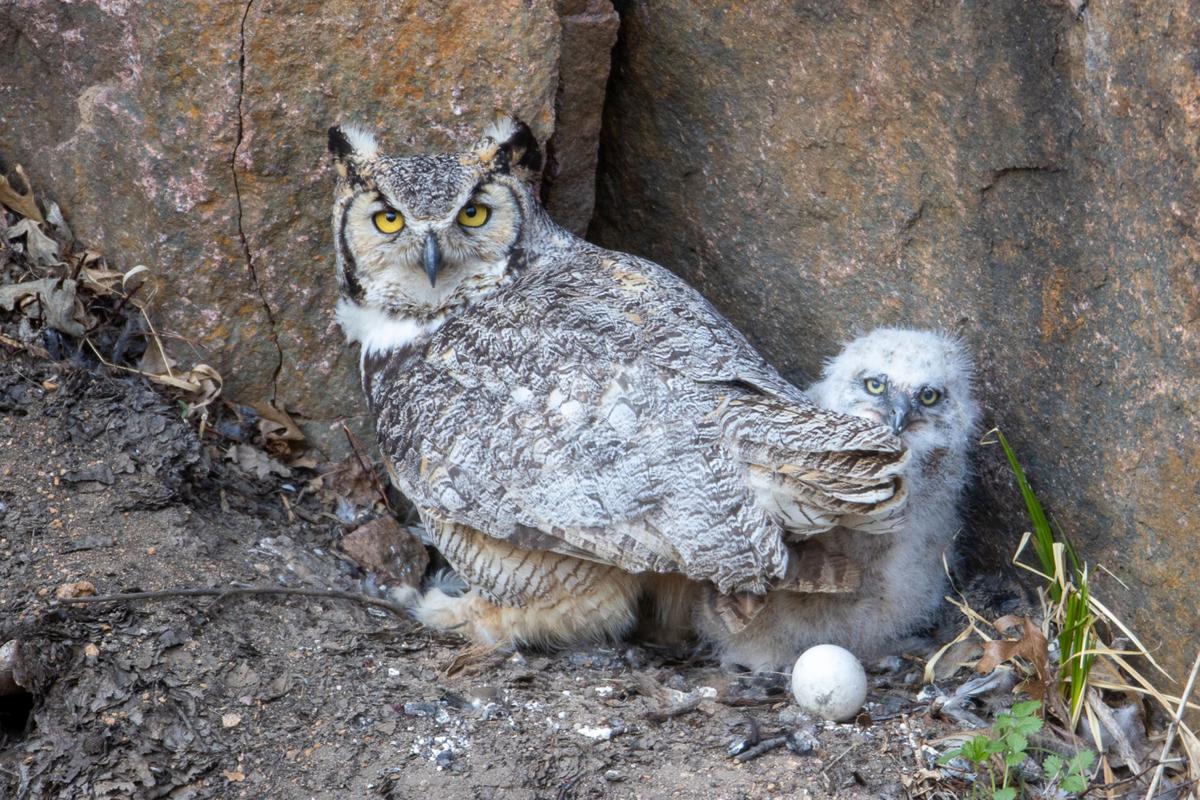 A great horned owl chick pokes its head from behind its mother earlier this month, unusually late for the early-nesting species.

There are a lot of aspects of nature that I find interesting. However, what I find even more interesting are what people think of nature or, more specifically, the rules people place on nature. Then everyone is surprised when nature doesn’t follow these human-imposed rules. We often get confused or upset when that happens.

This came to mind the other day while photographing a mother great horned owl (Bubo virginianus) and young owlet. What’s so unusual about that, you ask? If you check any of your bird books or do a quick Google search you will find reference to the great horned owl as one of the first or earliest birds to nest each spring.

Most nesting in the northern states takes place in early February, with the chicks hatching in March. By the middle of April the young great horned owls are already out of the nest and starting their lives as master predators.

In general, this is correct information. Even in places like Florida or Texas, the great horned owl is one of the first birds to nest, starting in December or January. Because of this, we say it as an absolute fact that this is how nesting goes with great horned owls. Then along comes a rule-breaker, like the mother and chick I’ve been visiting and photographing.

If you have been reading my column you know I love the rule-breakers of nature. I like how nature is constantly changing, exploring, probing new possibilities, all with the goal of successful reproduction of the species.

So here is a great horned owl mother who is nesting very late in the season. Why would this happen? At this time of year, young great horned owls are already out of the nest, flying around following their parents and begging to be fed. But right in front of me is a mother with a very young chick, perhaps only 2 weeks old and nowhere near leaving the nest.

The late nesting great horned owl can happen for a couple of reasons. The mother could have tried nesting earlier this year along with the other great horns and, for whatever reason, her nest failed. This means she would have to start over.

To fully understand this concept, you need to know a few things. For example, all wild birds have a season for nesting. There is a limited amount of time that the female can produce eggs. Hormones in her body turn on the reproductive tract to produce eggs, and for a short window of time she is able to lay eggs.

If her first clutch of eggs failed and she was still within the window, she would be able to produce a second clutch. If she lost her eggs and the window of time had already closed, her body can no longer produce the hormone that triggers the eggs, there would be no more nesting activity for this year, and she would have to wait.

Outside of this egg laying time, the bird’s reproductive tract is inactive. This is particularly important for migrating birds, whose reproductive tract shrivels up to save on weight. I am fond of saying why carry around all your junk if you’re not using it.

Another possibility of why the great horned owl mother is nesting late is because she was more successful in the past at a nest later in the season. Or to be more accurate, perhaps her mother was a late nester and those traits were passed on. This means her offspring will perhaps also be late nesters. This is the classic rule-breaker bird.

So these are the things that run through my head while standing and waiting for the baby owl to wake up and poke its head out from behind the mother so I can finally capture a picture.

I hope that these kinds of examples will help you understand that nature is never the same, and you shouldn’t expect it to be, either. Nature is always changing and adapting. It’s extremely important for the survival of all things wild.