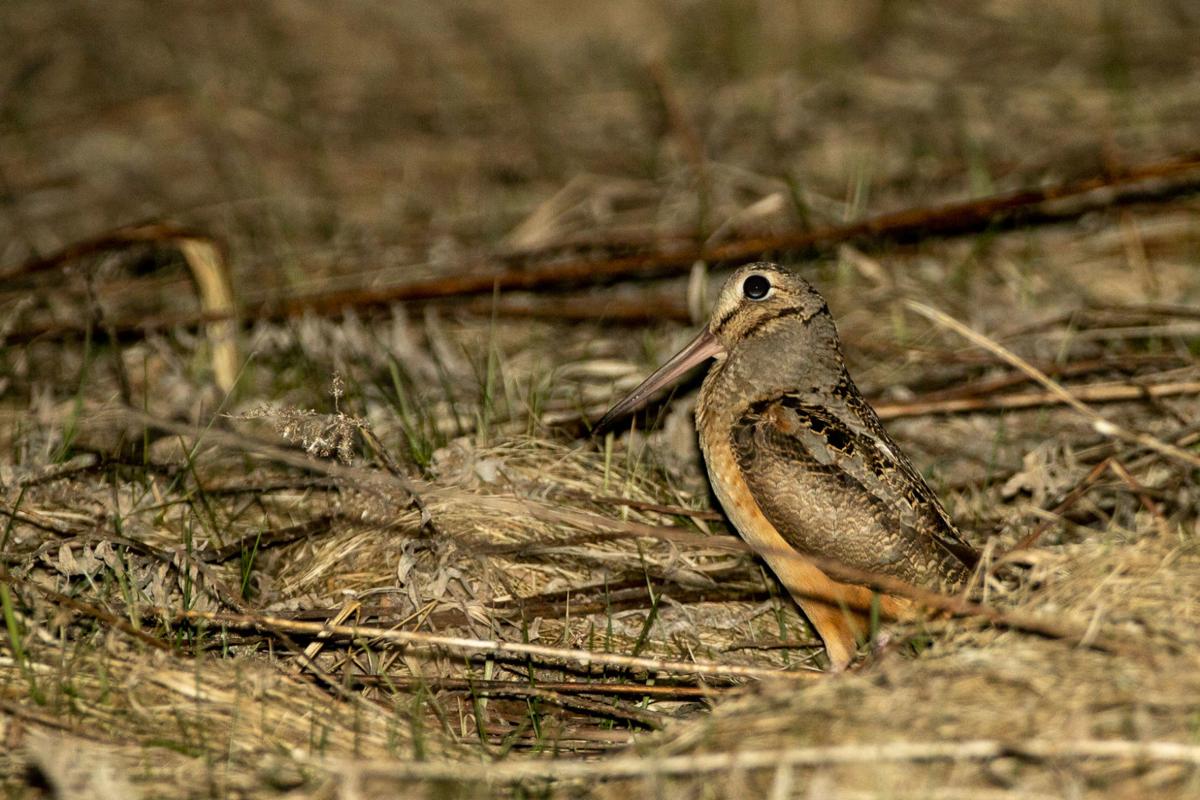 American woodcocks, also called timberdoodles, are among the first migratory birds to return to the northern forests in spring.

Stepping out of my truck and into the cool fresh air of a late evening, it felt so good to be outside in nature, especially after being trapped inside my house for these many weeks. To the west, the sun was setting, and I figured I had about 10 minutes before all the fun began.

I love these early spring evenings, when the temperatures finally warm up and the wind is not causing a bone-crushing wind-chill factor. It’s comfortable to be outside again. The bugs haven’t come out yet, and it feels like the earth is slowly coming to life after a long dormancy.

For over 40 years I have spent at least a couple early spring evenings studying and photographing a very special and unique bird, the timberdoodle, otherwise known as the American woodcock (Scolopax minor).

Although it is classified with the sandpipers and other shorebirds, the woodcock is an upland shorebird. To put it another way, it’s a shorebird that doesn’t live at the shore. In fact, it lives in deciduous woodlands. It ranges across the entire eastern half of the country, with all of the birds migrating out of the northern half of the country to join those in the southern half every winter. Each spring, the American woodcock is among the first birds to migrate back to the northern forests.

The American woodcock is a rather small but chunky bird with a long narrow bill. It has amazing camouflaging feathers that allow it to blend into its environment of dried leaves on the forest floor. In fact, it is nearly impossible to see one when it hunkers down and doesn’t move.

It has short legs, especially for a shorebird, and a round head with huge bulging eyes on the sides. It is believed that the vision of the woodcock covers nearly 360 degrees around the bird and also above. This means it has the ability to see in front, behind and above without turning its head. This comes in handy if you spend a lot of time with your long bill poked into the ground or mud.

Because of this eye position, the ears of the woodcock are located under the eyes instead of behind as in most bird species. Their hearing is just as good as their eyesight.

The bill of the woodcock is several inches long and highly adapted for probing into the soft earth. It is often described as a prehensile bill. Earthworms make up about 60 percent of the bird’s diet. The rest of the diet is a combination of insects such as ants, flies, beetles and crickets. The bird feeds in the early evening and again near morning, spending the days resting. It may eat its own weight in worms and other insects each day.

But it is the males’ display flight that brings me out on a warm spring evening at sunset. The American woodcock males perform one of the most amazing display flights in the bird world. About 15 to 20 minuets after sunset, during the twilight hour, male woodcocks fly into a displaying arena.

Each first starts by giving a raspy or buzzy single note call that sounds like he is saying “peent.” This call is given over and over several seconds apart. Then, suddenly and without warning, the male takes flight into the evening sky. With barely enough light for anyone to see, the male flies up to about 100 feet and begins a slow-motion display flight. During this spiral flight he produces a several high-pitched twittering sounds with the air rushing through the outer or longest primary flight feathers of his wings.

Females sit on the ground in the arena watching and listening to the high-flying males giving their sky dance. Then the male spirals down out of the sky, plummeting to earth at high speed, lands back on the display ground and starts to call again. If he is successful at impressing a female, she will fly close to him in the arena and they will have a brief encounter. She will fly off into the woods to build a nest and lay eggs, and the male will return to his sky dance.