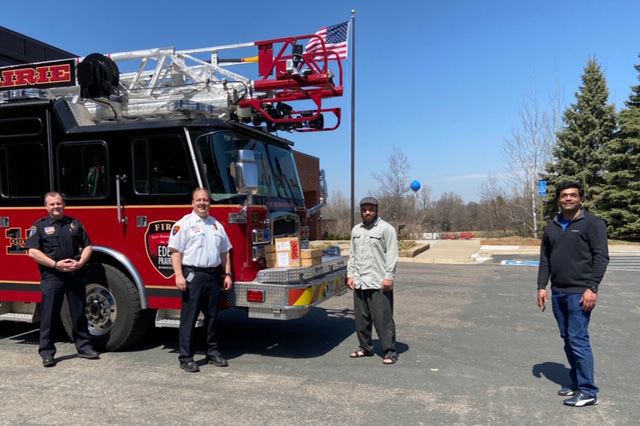 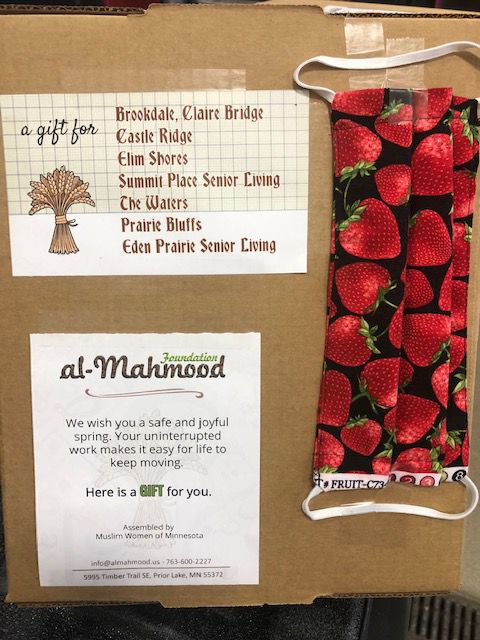 The boxes of donated masks from the al-Mahmood Foundation were packed with a sample mask on the outside.

The boxes of donated masks from the al-Mahmood Foundation were packed with a sample mask on the outside.

Well before Gov. Tim Walz asked Minnesotans to make and donate cloth face masks for a statewide drive, Cyndy Powers-Kettler was working on a plan to get some of the city’s essential workers that very same protective equipment.

Powers-Kettler, a registered nurse for 40 years and Eden Prairie resident for 30, was spurred to action by the news that her daughter would be doing her medical residency in an emergency room in New York, one of the hotbeds of the COVID-19 (coronavirus) pandemic.

“She’s a lot braver than I am,” Powers-Kettler said. “I felt like as her mother I needed to show her I was not just going to sit around and do nothing.”

On April 3, she started looking at data from the Minnesota Department of Health (MDH), trying to figure out how she could be useful in her community. With 15 years of experience as a director of senior housing, Powers-Kettler realized that direct care providers working in congregant living communities, where many residents are elderly or have preexisting health conditions, needed high-quality masks to wear home from their jobs, to protect both themselves and others.

At that point, she reached out to Eden Prairie Fire Chief and Director of Emergency Services Scott Gerber. The city’s fire inspectors were already checking in with local senior living communities to ask about their needs and concerns about personal protective equipment, Gerber said.

“We used that relationship that we had already created to work with Cyndy to talk about what might those needs look like,” he said.

That’s how Powers-Kettler and Gerber came up with their goal of collecting 418 cloth face masks: that’s how many direct care providers, or employees who feed, bathe and dress the seniors who need assistance, work at the biggest senior living communities in Eden Prairie.

They partnered with the al-Mahmood Foundation, based in Prior Lake, which has a women’s sewing circle that’s been making masks for donation since the pandemic began.

On April 22, the al-Mahmood Foundation dropped off 300 masks its sewing circle had made. The next day, the Eden Prairie Fire Department’s chiefs personally delivered them to seven different senior living facilities in the city. It was “super neat to see the circle completed,” Gerber said.

In addition to those 300 masks, residents donated nearly 2,800 cloth masks to the Eden Prairie Fire Department for the governor’s statewide mask drive on Saturday, April 25, according to a Facebook post by Gerber.

As the pandemic drags on, Powers-Kettler said that people who are able to “take that vulnerability that you’re feeling and turn it into courage” should do so by finding ways to help and support their neighbors and community, including making and donating masks.

“Everybody that’s working is putting themselves at risk,” she said. “They need to know that the city of Eden Prairie and the people that live here appreciate what they’re doing.”

Her next move is to find another 192 masks to give to workers at the city’s smaller group living situations, where the risk of coronavirus transmission is also high, and to push the message that everyone should be wearing masks.

“I think it’s only just beginning,” Powers-Kettler said. “Are we all able to take a bigger step in the direction of assuming you’re positive?”