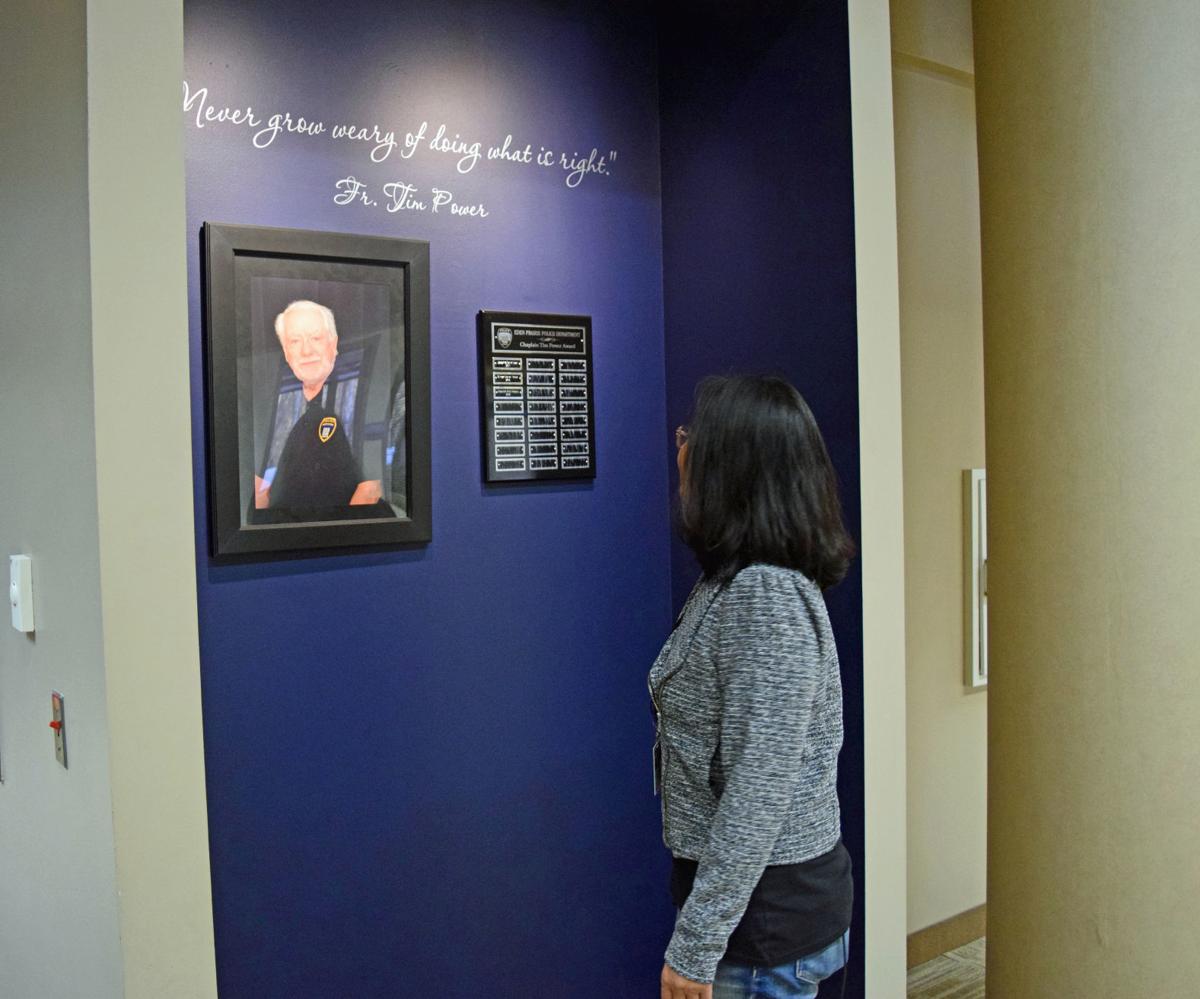 Chaplain Deanna Bassett reflects on a memorial for Father Tim Powers, one of the first chaplains in the Eden Prairie Police and Fire Chaplain Unit. 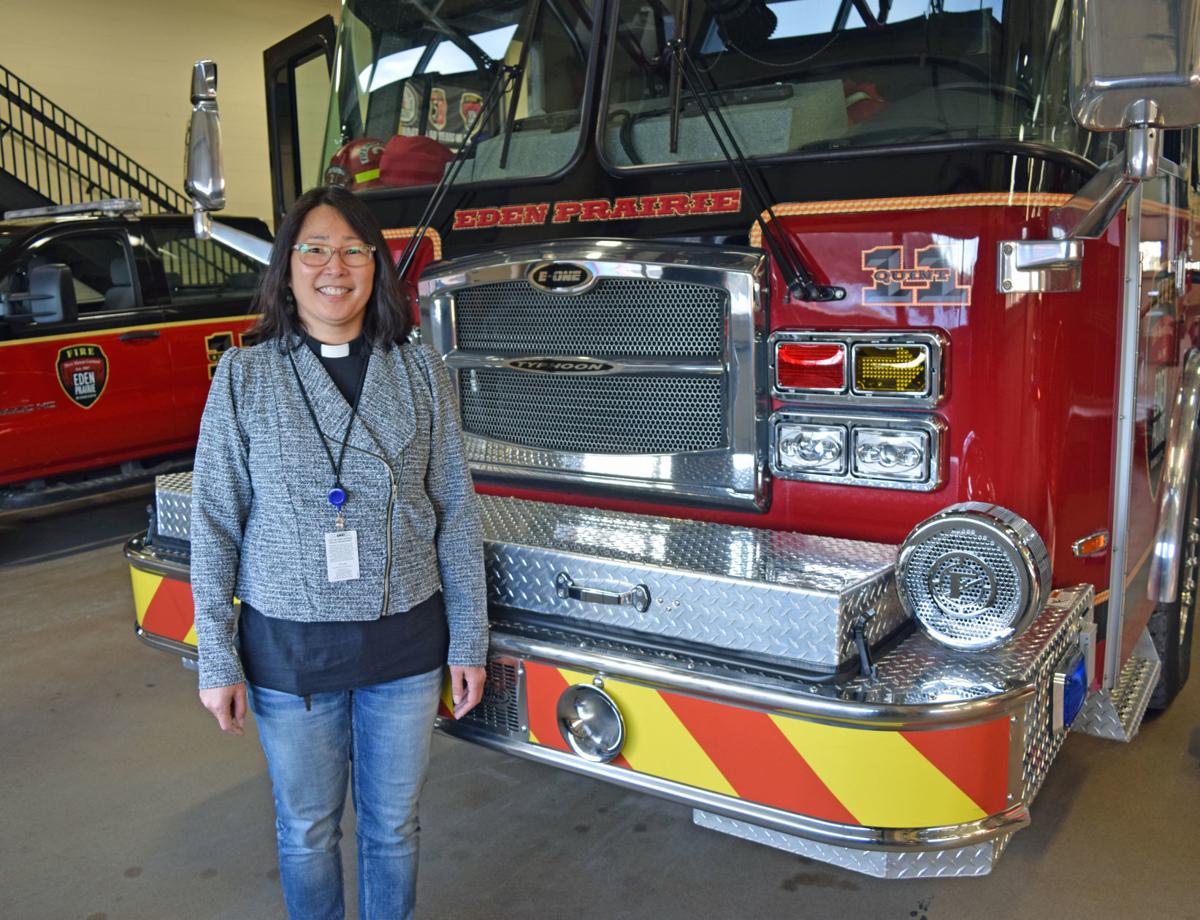 Deanna Bassett joined the Eden Prairie Fire Department as a firefighter before she took on the role as a chaplain with the Police and Fire Chaplain Unit.

Chaplain Deanna Bassett reflects on a memorial for Father Tim Powers, one of the first chaplains in the Eden Prairie Police and Fire Chaplain Unit.

Deanna Bassett joined the Eden Prairie Fire Department as a firefighter before she took on the role as a chaplain with the Police and Fire Chaplain Unit.

When a person in Eden Prairie dials 911, it might not be just police or firefighters who show up to help. Since 1992, there’s a chance one of the members of the department’s Police and Fire Chaplain Unit might show up to help, too.

Deanna Bassett joined the Eden Prairie Police and Fire Chaplain Unit in December. She and eight other chaplains support members of the public who need help from emergency services, and police and firefighters, cope with the emotional and spiritual trauma that often comes with a situation when someone calls 911.

“People don’t call the police because they’re having a good day,” said Sgt. Jamie Good, who oversees the Chaplain Unit with the fire department’s Kurt Buchanan.

When officers arrive at a scene, they’re busy doing their job of investigating, questioning and securing the area. In the cases where someone has died or experienced another form of trauma, police are often too busy with their work to provide the crucial support families and witnesses need in that moment, Good explained.

That’s where the chaplains come in.

That can mean a variety of things, from providing a shoulder to cry on and a compassionate ear, to helping arrange funeral services or finding the answers to questions about police or fire procedures.

“We rely heavily on the chaplains to come in and be a first contact for us,” Good said. “As much as we want to provide the service that Deanna’s talking about, we don’t have the time.”

“Police and fire and paramedics are there to take care of the emergent situation,” said Eden Prairie Fire Chief Scott Gerber.

Gerber has plenty of experience with chaplains over his career and has seen the ways their support can help both members of the public and police and firefighters handle trauma. Years ago, “everybody held those things inside,” he recalled, but growing research shows that repeated exposure to traumatic situations takes a toll on emergency response teams.

Repeated exposure to trauma shows up in the form of post-traumatic stress disorder among many firefighters, according to the U.S. Fire Administration. Rates of depression, alcohol abuse and sleep disorders are all higher among firefighters and emergency service personnel than in the general population, the site says. That’s why the Chaplain Unit responds not only to calls to assist the public, but also the police and firefighters themselves.

“Part of why I’m there is to be with the officer and hear what’s on their mind,” Bassett said.

“Police and fire and paramedics deal with situations that are not always very easy situations, that are very challenging mentally,” Gerber explained. “I will tell you that in my career of 34 years in the emergency services, I’ve certainly seen some things.”

Bassett also answers calls for the MNFire hotline, which with the Metro Critical Incident Stress Management program, are two support systems for emergency personnel dealing with trauma. A call for help at any time can trigger an unexpected emotional response in firefighters, so the hotline is a 24/7 resource.

“You never know which ones are going to trigger an issue,” Bassett said.

Bassett wasn’t always so deeply enmeshed in the city’s emergency services; her path to the Eden Prairie Fire Department and the Chaplain Unit was long and winding. She wanted to be a firefighter from a young age, but being a woman of small-stature with a fear of heights, she thought the career wasn’t for her.

“I kind of wrote off being a firefighter,” she admitted.

She became an accountant instead and began a family with two young sons, all the while exploring her faith through classes and study. It was a community night out in Eden Prairie that made her take another look at being a firefighter. After speaking with a member of the Eden Prairie Fire Department, she decided to sign up and begin training as a part-time firefighter in the summer of 2017.

She’s responded to many calls, including a scene where a woman had a heart attack in front of the firefighters ,who were able to help her with a defibrillator, and a late-night fire during the polar vortex last January when equipment stopped working because it was so cold.

Having a chaplain who’s also an experienced firefighter is a rare combination, Gerber said.

“She’s a very caring individual, and competent to be able to carry out the skills we need to do,” Gerber said.

As Bassett worked toward earning a master’s of divinity from a Lutheran seminary − she graduated in 2019 − she was drawn to engage more directly with her faith and community and become a pastor.

“I felt called to lead in spiritual ways, to help people connect to their spirituality,” Bassett explained. In part, the pastors in her own life inspired her to follow their footsteps, with their active roles in their communities both through faith and as a good citizen, she added.

Engaging with people of all faiths, and who are grappling with their faith, is part of what makes the work appealing. Whether it’s speaking with a teenage boy who says his higher power is snowboarding, or a person questioning their spirituality, “faith is different for everybody,” Bassett said.

“Faith to me is not a blind faith,” she added. “The face of God can be seen in other people who aren’t so much like you.”