Members of the Eden Prairie High School boys basketball team, and their coaches, met for a final time on Friday. Friday’s Section 2-4A championship game between top-seeded Eden Prairie and No. 3-seeded Shakopee was canceled earlier in the day, as was the state tournament. 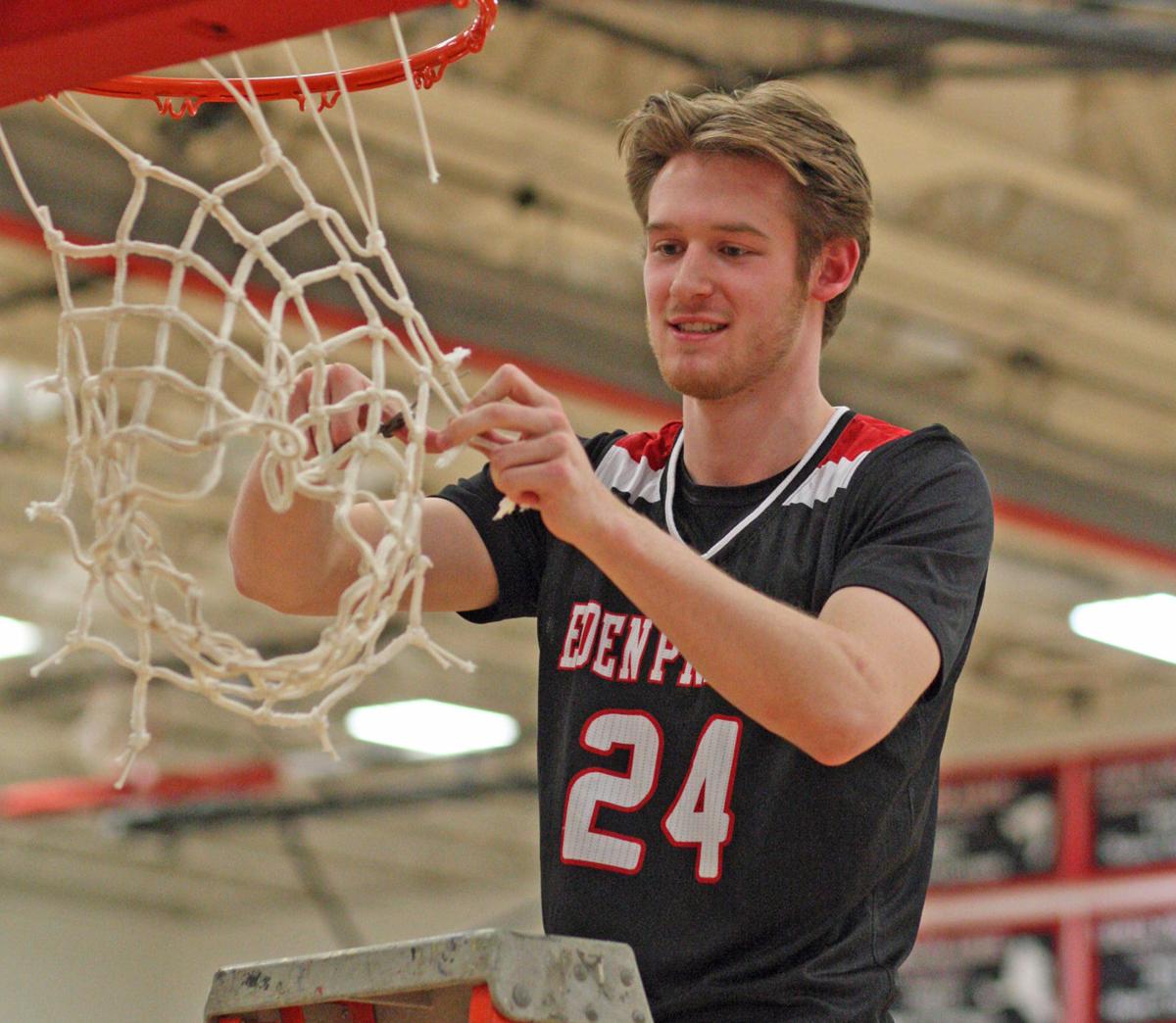 Co-captain Connor Christensen cut down the Eden Prairie net at an end-of-the-season ceremony on Friday. Eden Prairie ended its season with a 28-0 record. 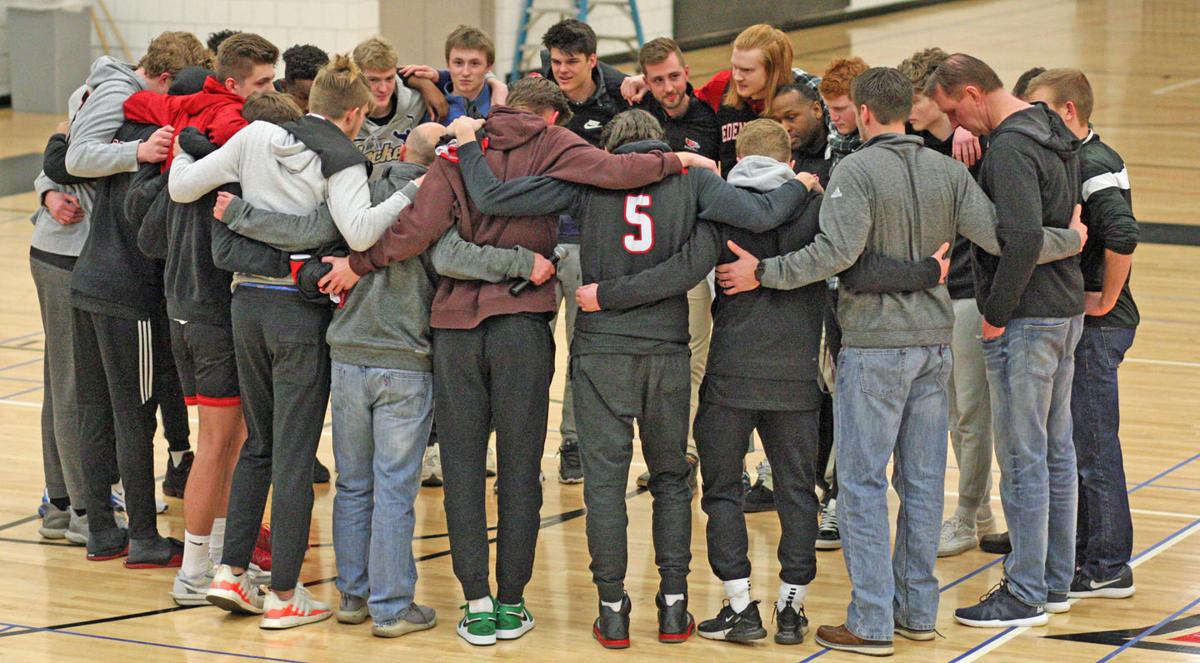 Instead of a pre-game huddle, the Eden Prairie basketball family gathered for an end-of-the-season huddle. Eagles on three.

Members of the Eden Prairie High School boys basketball team, and their coaches, met for a final time on Friday. Friday’s Section 2-4A championship game between top-seeded Eden Prairie and No. 3-seeded Shakopee was canceled earlier in the day, as was the state tournament.

Co-captain Connor Christensen cut down the Eden Prairie net at an end-of-the-season ceremony on Friday. Eden Prairie ended its season with a 28-0 record.

Instead of a pre-game huddle, the Eden Prairie basketball family gathered for an end-of-the-season huddle. Eagles on three.

Like a pass in transition, the events of last week happened quickly.

On Saturday, March 7, the No. 1-seeded/No. 1-ranked Eden Prairie High School boys basketball team ran its record to 28-0 with a 99-74 section-semifinal win over Prior Lake.

On Thursday, it was announced that coronavirus concerns would force Friday’s Section 2-4A championship game with Shakopee to be played in front of a limited number of fans.

Eden Prairie coach David Flom responded to a text with, “I feel like crying.”

Flom’s Eagles, after all, were in the midst of the best season in Eden Prairie history, perhaps state history.

A section finals game in front of a less-than-packed house was hardly a reward.

On Friday morning, Friday’s title game was canceled all together. The same fate would strike the state tournament.

Said announcements weren’t about delays or postponements, they were about finishes.

Just like that, Eden Prairie’s historic season had ended. No warning and no closure.

Flom’s Facebook posting read: “Fifth-graders don’t know how to handle it when their teacher is sobbing behind his desk. This team is a coach’s dream. 28-0, ranked No. 9 in the country, but can’t claim state champs is heartbreaking. With that being said, I love these boys, their parents, our coaches and the fact that my family gets to be part of something so special.”

Basketball teams cut down nets following championships. It’s more of a basketball tradition than soaking a coach in a Gatorade shower.

The gym was somber.

“I thought I cried myself out today,” Flom said, before addressing his team and their families, “but it didn’t last too long.”

In his next breath, he flashed a smile.

“It’s a time for celebration,” he said, “and not just for the guys, but for our whole family.”

The coach then mentions a couple notes he received following the season-ending announcement.

One note in particular hit home like a wide-open three.

“I received a photo of a three-point line on a driveway,” he said, “The kids shooting baskets had their hair in buns, just like John (John Henry is Eden Prairie’s all-time three-points leader).

One by one, players climbed a ladder and snipped a piece off an Eden Prairie net. When they’d step back down onto the floor, a new floor that they had never lost on, they’d put the piece of netting in their pockets for safe keeping.

The Eden Prairie coaches would do the same. Flom climbed to the top of the ladder and cut the last piece of netting. He raised the net in the air, lowered his head and smiled.

“I’m super grateful I was part of this,” he said. “It’s the closest team I’ve ever been on; we’re like brothers.

“What makes it so disappointing,” he added, “is that we had everything in front of us.”

Teammate Austin Andrews answered the mad or sad question by saying he was shocked.

“We didn’t go into last Saturday expecting it would be our last game,” he said. “We thought we’d be playing next week.

“There isn’t that sense of closure,” he added, “but we did everything we could. There’s still a zero in the loss column.”

When asked about a legacy, senior forward Connor Christensen said his Eagles played the right way.

“This was a special group,” he said. “We worked hard. We were unselfish and we played together.

“The big thing,” he added, “is that we enjoyed each others’ success.”

From a roster construction standpoint, Flom said he couldn’t have planned it any better.

“We had that dominating point guard (Dobbs),” said Flom. “We had the best shooter in program history (Henry). We had an elite wing who could guard anyone (Christensen). We had a post who could score on anyone (Andrews) and we had that real tough defender (Will Foster).

“Their psyche tops all of that,” he said. “A teacher friend had asked our seniors how they were doing after she heard how the season had ended. They all asked about me. They wanted to know how I was doing.”

By his own admission, this was the year.

“I’m not going to say we won’t ever win a state championship,” he said, “but this team was special.

“What I can say,” he added, “is that I can’t imagine ever coaching another team like it.”

State-championship banners from a plethora of sports ring the Eden Prairie gym.

There’s no doubt Flom and company pictured adding a 2020 boys basketball state championship banner to the circle. Had they beat Shakopee on Friday, they would have been heavy favorites to win a state title.

“Our banner is going up there,” said Flom. “We know in our hearts we’re state champions, but we can’t say that.

“Instead, our banner will say perfect season,” he said. “We’re 28-0 but we’re perfect way beyond that record. We knew it as it was happening. It was perfect in January; it’s perfect today.”

By Sunday, limits on the numbers that could gather led to the cancellation of Eden Prairie’s end-of-the-season banquet.

“I’m so glad we did Friday,” said the coach.