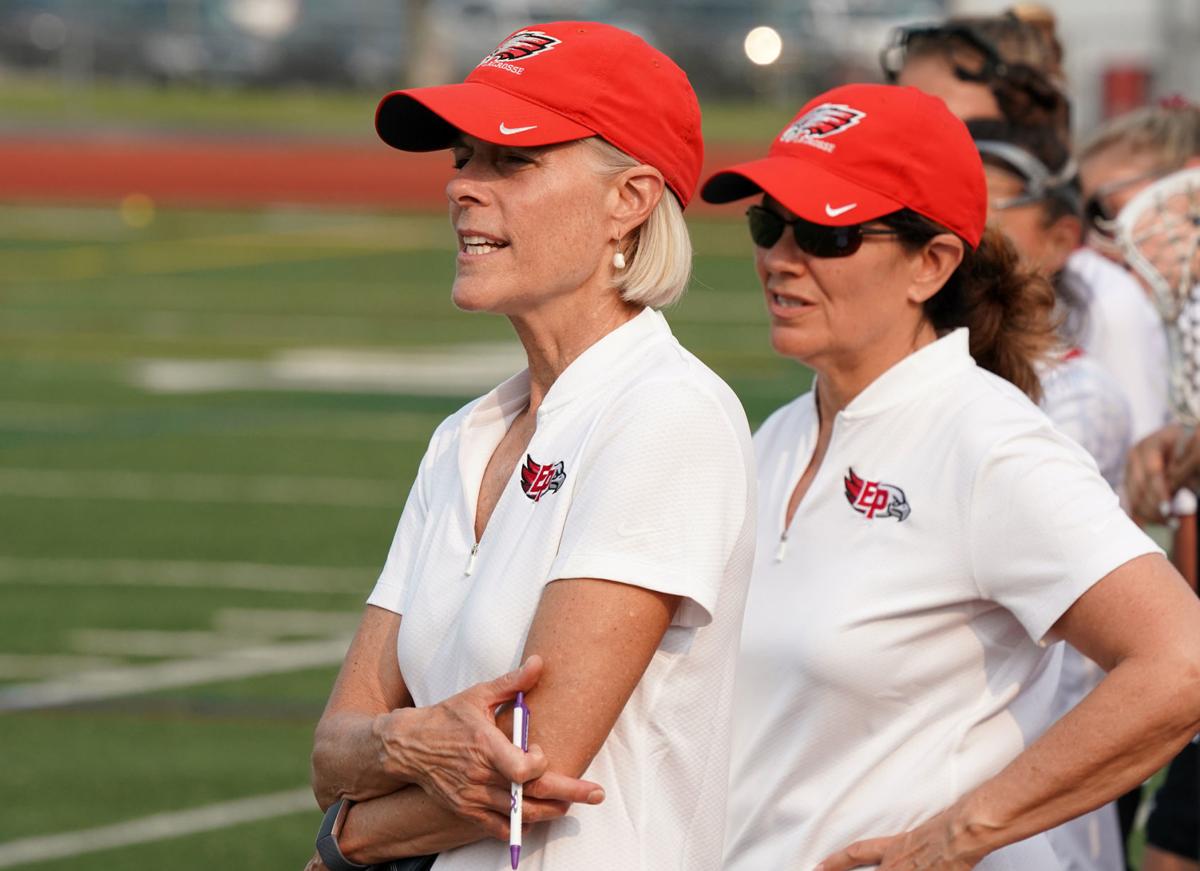 Judy Baxter, left, and Beth Patterson raised the Eden Prairie girls lacrosse program from infancy to one of the best programs in the state. After 20 years, they stepped away. 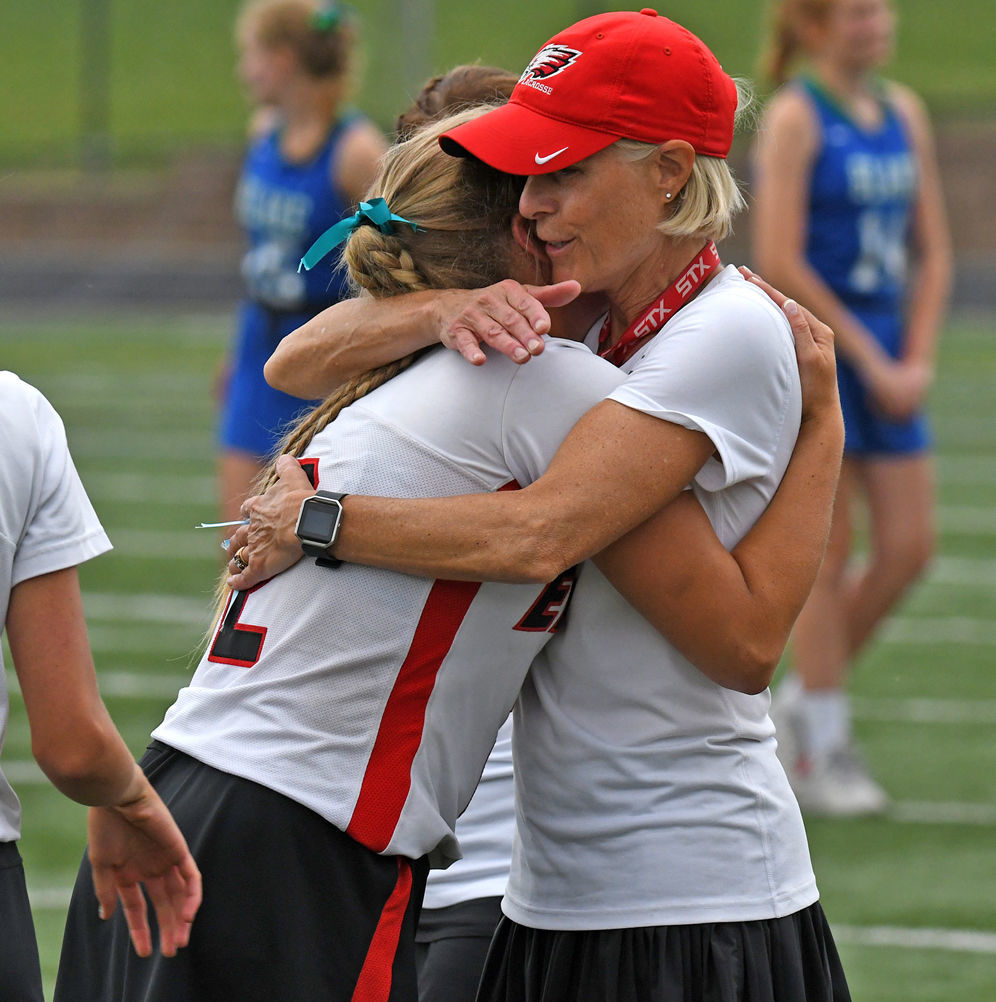 More important than the numbers are the relationships Baxter and Patterson have cultivated in their 20 years of coaching.

Judy Baxter, left, and Beth Patterson raised the Eden Prairie girls lacrosse program from infancy to one of the best programs in the state. After 20 years, they stepped away.

More important than the numbers are the relationships Baxter and Patterson have cultivated in their 20 years of coaching.

If James Brown is the Godfather of Soul, Judy Baxter and Beth Patterson are the Godmothers of Minnesota girls lacrosse.

Last week, Eden Prairie’s co-coaches stepped away from a program they started 20 years ago.

After seeing a tweet announcing the Baxter/Patterson resignations, NCAA coach/author Kate Leavell tweeted back, “How do you separate these two from Eden Prairie lacrosse — they have defined that program and the growth of lacrosse in Minnesota would be exponentially stunted had they not put out tireless efforts to grow the game.”

Now is the time

While Baxter said she couldn’t coach forever — she’s been either playing or coaching for 50 years — she said there’s never a good time to call it quits.

“You’re connected to a group of seniors,” she said, “but then there’s that group of freshmen you’d like to see through high school. When they become seniors, there’s another group. It goes on and on.

“Truth be told,” added Baxter, “my mom is 91 and my twin brother is dealing with health issues. They’re both back in the Philadelphia area.”

Patterson is struggling with some of the same things.

What they did know was that it would come together.

“We decided on that a long time ago,” she added, “but that doesn’t make it easier.”

When asked about a favorite Eden Prairie lacrosse moment, Baxter went back to the year 2001 when her team beat Hopkins and Blake en route to Eden Prairie’s first club title.

“We had never beaten either one of those teams,” she said. “They didn’t even respect us.”

“I remember looking at Judy after the title game,” she said. “They did it, they really did it.”

Making it more special was the fact that Patterson’s daughter was on the team.

The sport of girls lacrosse was sanctioned by the Minnesota State High School League that very next year.

In 2007, the MSHSL started hosting the girls state tournament.

Baxter has lots of favorite moments.

“Definitely the girls,” she said. “They were so committed. They had such a good work ethic. They were always so positive and they had great attitudes.”

Former player Meaghan Pezon, a member of the Isobel Cup-winning Minnesota Whitecaps professional women’s hockey team, said she’s had tons of coaches, but none like Baxter and Patterson.

“I can’t pinpoint the reasons why,” she said, “but they had a way of motivating me when I didn’t know I needed motivating.

“They knew how much you could be pushed and then they’d push you that far,” she added. “It made me a better player.”

“I knew this day was coming,” said Pezon, “but I still can’t envision Eden Prairie lacrosse without Judy and Beth.”

While Patterson likes the Xs and Os associated with being a lacrosse coach, she said lacrosse isn’t just a game.

“It’s relationships,” she said. “It’s about being part of a team.”

“It was fun to be a pioneer,” said Patterson, “and it was fun to bring what was a little club from its infancy to where it is now.”

“We wouldn’t have done it this long if it wasn’t enjoyable,” she said.

When asked about her Eden Prairie program’s roots, Baxter mentioned the early years.

“When we first talked about lacrosse,” she laughed, “people thought we were talking about the city in Wisconsin.

“It’s been fun seeing the development,” she said, “not just the individuals, but the sport.

“Look at it now,” she added. “Not only are there more teams, but there’s more good teams.”

“We graduated eight seniors,” she added, “but we have some great young players coming back.”

“Biggest regret” asked Baxter, “that my time has come to say goodbye. It is a sadness to be leaving the girls, and a program that I have willingly put my heart and soul into ... I have loved every minute”

“It’s nothing we wanted to do,” added Patterson, “it’s just that our lives are headed in different directions.”