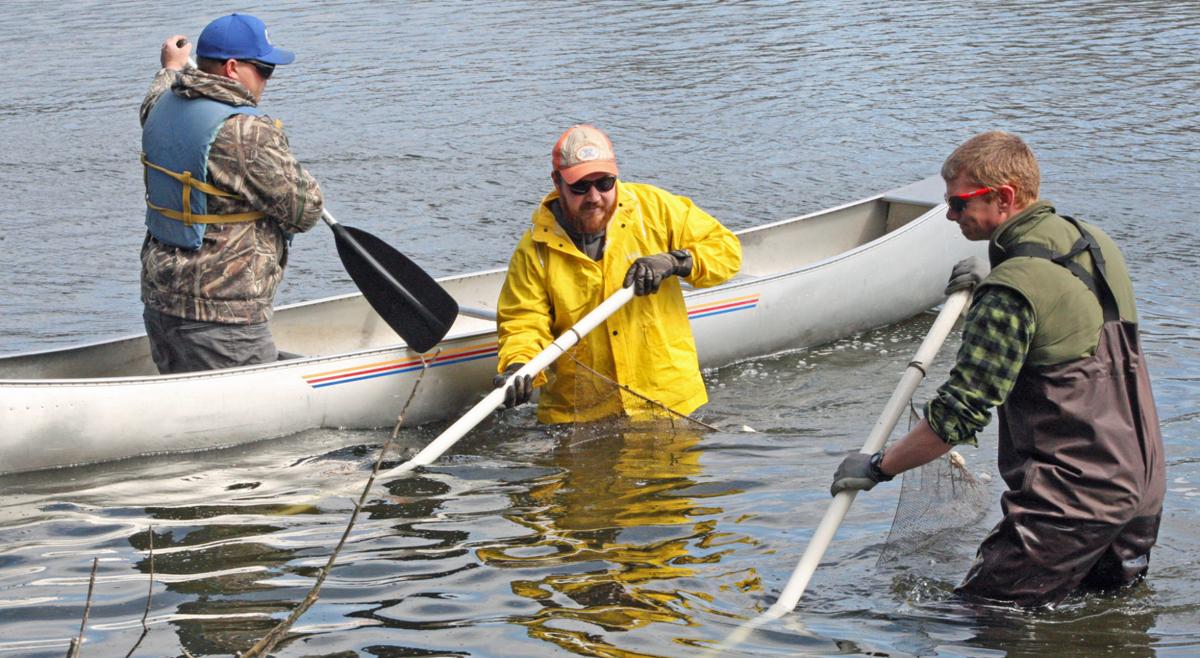 A coordinated effort between Andy Edgecumbe, left, Drew Dickhart and Jordan Wein resulted in a seining net full of Big Woods Lake goldfish. The bigger fish were tagged and released as part of a goldfish removal research project. 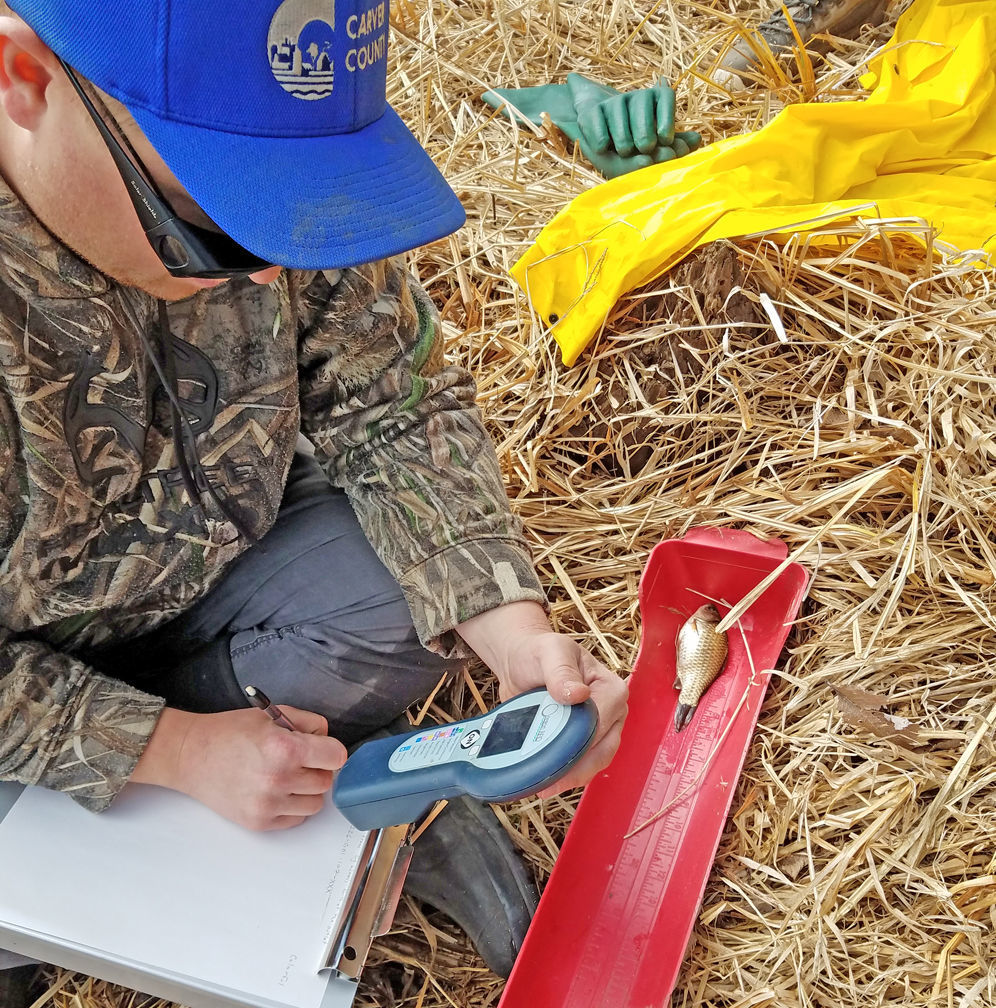 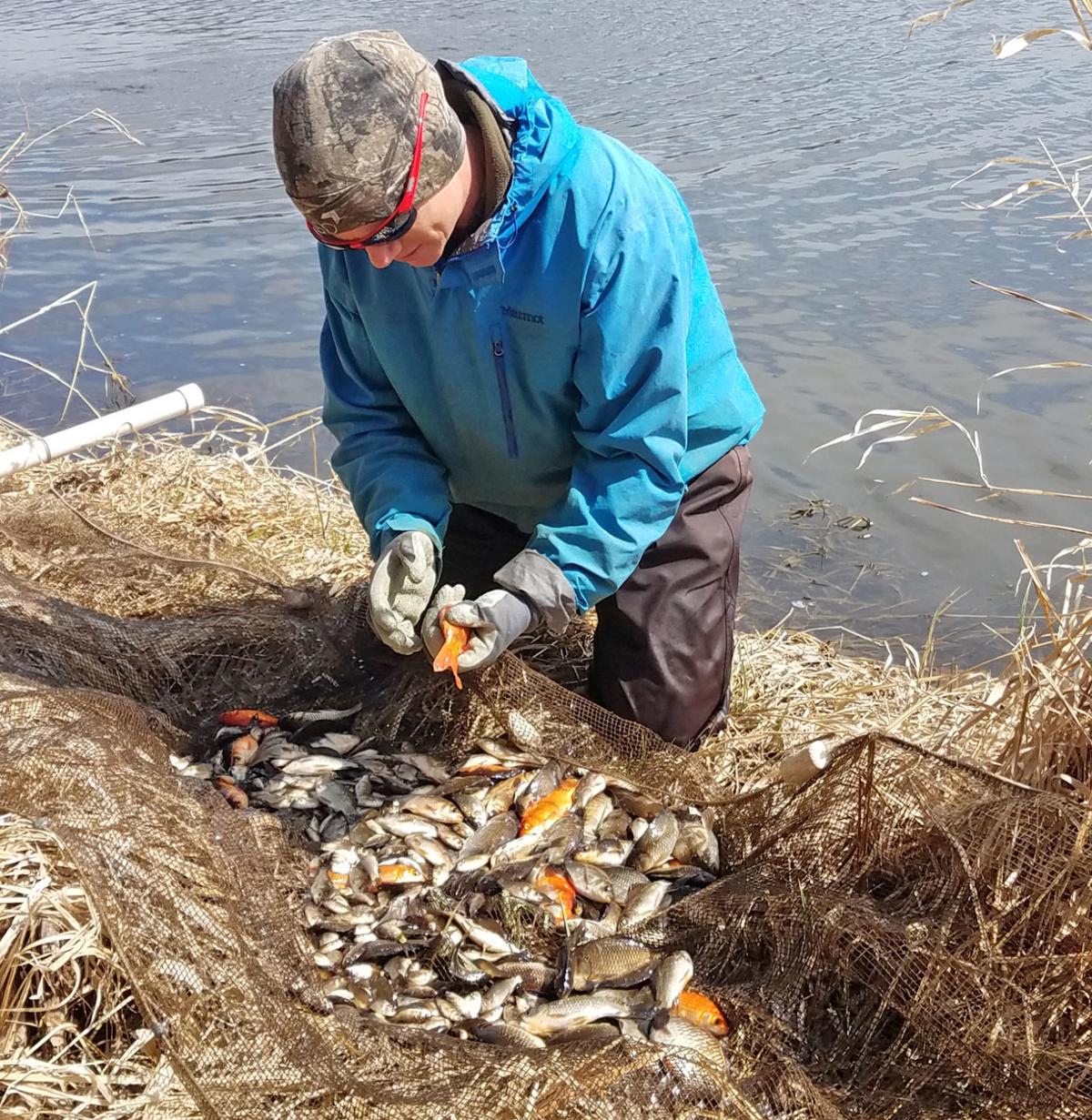 Jordan Wein, an environmental scientist for WSB Engineering, handpicks a large goldfish from a seining net capture on Chaska’s Big Woods Lake. The biggest fish were captured, tagged and released. 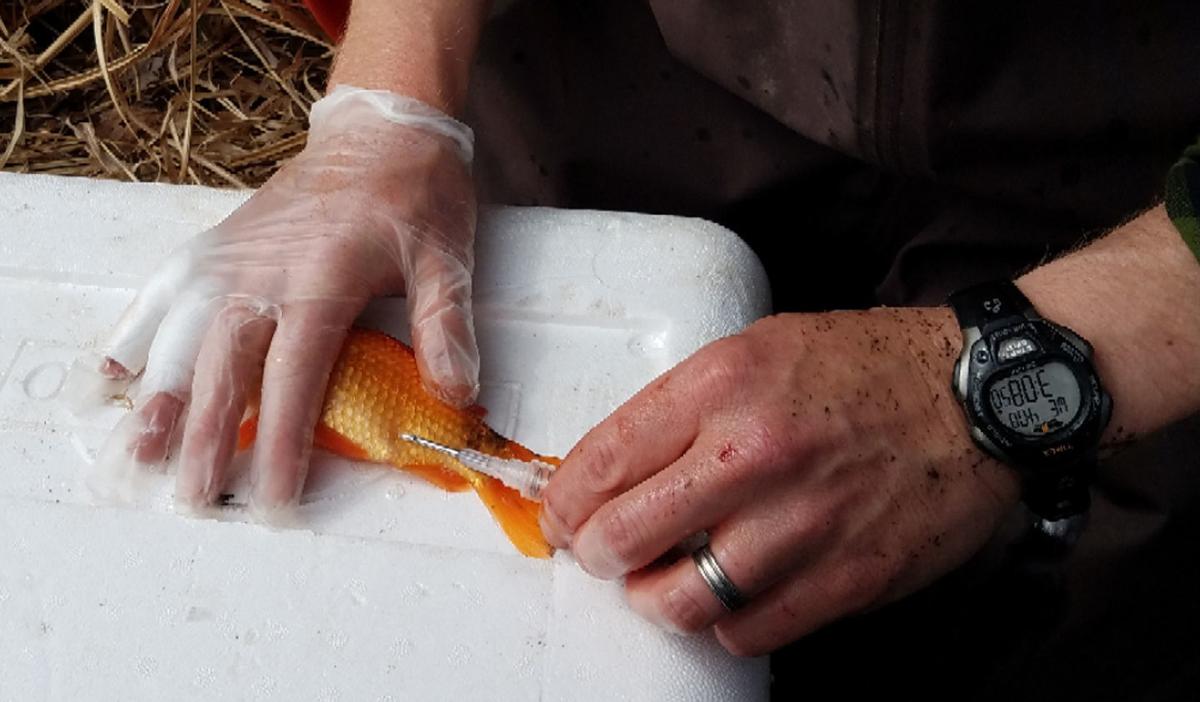 Tagging involves inserting a passive integrated transponder into a captured goldfish. When the fish swims past an antennae, movement pattern data can be collected.

A coordinated effort between Andy Edgecumbe, left, Drew Dickhart and Jordan Wein resulted in a seining net full of Big Woods Lake goldfish. The bigger fish were tagged and released as part of a goldfish removal research project.

Jordan Wein, an environmental scientist for WSB Engineering, handpicks a large goldfish from a seining net capture on Chaska’s Big Woods Lake. The biggest fish were captured, tagged and released.

Tagging involves inserting a passive integrated transponder into a captured goldfish. When the fish swims past an antennae, movement pattern data can be collected.

Environmental scientist Jordan Wein guesses that there could be as many as 100,000 goldfish in Carver County's Grace Chain of Lakes.

Wein, who works for WSB Engineering, doesn't really know for sure and no one does.

What this means is that goldfish have fewer underwater predators in Big Woods and Hazeltine.

“Clearer water would lead to more plants,” he added. “Better water quality could lead to better fish diversity, which could halt the goldfish cycle.”

Male goldfish can breed when they reach 2 years old. Females start breeding when they're 2 to 3 years gold. Goldfish can live to be 25 years old.

Grace Chain of Lakes, we have a problem.

WSB Engineering has been contracted by the Carver County Water Management Organization to assist with goldfish research and removal efforts in the Grace Chain of Lakes.

This is no easy task.

As cousins to the common carp, goldfish do and don't act like carp.

“There's a fair amount of carp research,” sad Wein, “but not so much about goldfish.”

The two big questions: How did they get here? How do you get rid of them?

The most likely reason for their existence in the Grace Chain of Lakes is that one or more individuals illegally released them.

Note: Minnesota state law prohibits transporting of live fish without the appropriate permit. A fishing license allows an individual to fish for goldfish with hook and line, but you cannot transport them live.

So, how do you get rid of them?

The answer lies in the problem, maybe.

A couple weeks ago, WSB Engineering set a box net trap on the north outlet of Big Woods Lake. Last year, large goldfish concentrations were observed in that area.

“They might have been moving upstream to spawn,” said Wein, “but we don’t know for sure.”

The trap was placed when the water reached a certain temperature.

Andy Edgecumbe, water resource technician for the Carver County Water Management Organization, has been recording temperatures and monitoring the trap.

If concentrations are large enough, goldfish can also be removed with a beach seine (large net). In the first week of April, staff used a beach seine to capture 700 goldfish at the outlet of Lake Hazeltine. One hundred of these fish were tagged and released.

Should fish barriers be considered? Should the infected lakes be restocked with native fish? Would aerators that increase oxygen sustain more a diverse fish population?

You can’t answer these questions without a better understanding of what the goldfish are doing and when they’re doing it.

Tagging will help with this understanding.

The goal over the summer is to tag and release 500 goldfish.

The tag is called a passive integrated transponder. They’re like the microchips that are inserted into pets. When a pet is lost, the chip can be read and its owner can be found.

By tagging goldfish, movements and movement patterns can be analyzed. The data is collected when a tagged goldfish passes a receiver (antennae).

Like nearly everything goldfish related, the capture and tagging process is hardly an exact science.

Trapping the fish in a box net is the most efficient way to capture goldfish. The advantage of this method, when it works, is its simplicity. After trapping the fish, you can either tag, release or remove.

The disadvantage is that box nets require an elaborate setup. They are also site specific.

Seining is another capture method.

Last Wednesday, staff worked a beach seine at the south end of Big Woods Lake. While in a canoe, Edgecumbe would spot a concentration of goldfish and then try to scare the fish in the direction of Wein and Drew Dickhart, invasive species coordinator for the Carver County Water Management Organization.

If this reminds you of herding cats, you’re right.

The fish, after all, were hardly cooperative.

Note: The seining net Wein and Dickart were using was eight feet long.

Sometimes, the fish would scatter and head for deeper water. Other times, they would go around the net.

Sometimes, everything goes according to plan.

The first full net Wein and Dickhart pulled on Wednesday netted maybe 250 goldfish. Goldfish were the only species captured. They put the fish in buckets and tried to capture more.

When they had captured enough appropriately-sized goldfish, they set up a tagging operation. Transponders were inserted and verified and the fish were measured and released.

Multiple electroshocking dates are planned in Big Woods and Hazeltine over the summer as an additional survey tool.

The main goal of the study/removal project is to lower the goldfish population in the Grace Chain of Lakes to a level where it’s not harming lake ecology and biodiversity.

The public can help by making sure there aren’t new introductions.

Dumping and releasing pets you either don’t want or can’t care for anymore is not only not OK, it’s illegal.

Goldfish cannot be used as bait (that’s another way goldfish get released into lakes and rivers).

“Goldfish were released at some point,” said Wein. “It might have been two, or could have been 10. Look what it turned into.”

‘Thousands’ of goldfish found in Chaska among Grace Chain of Lakes