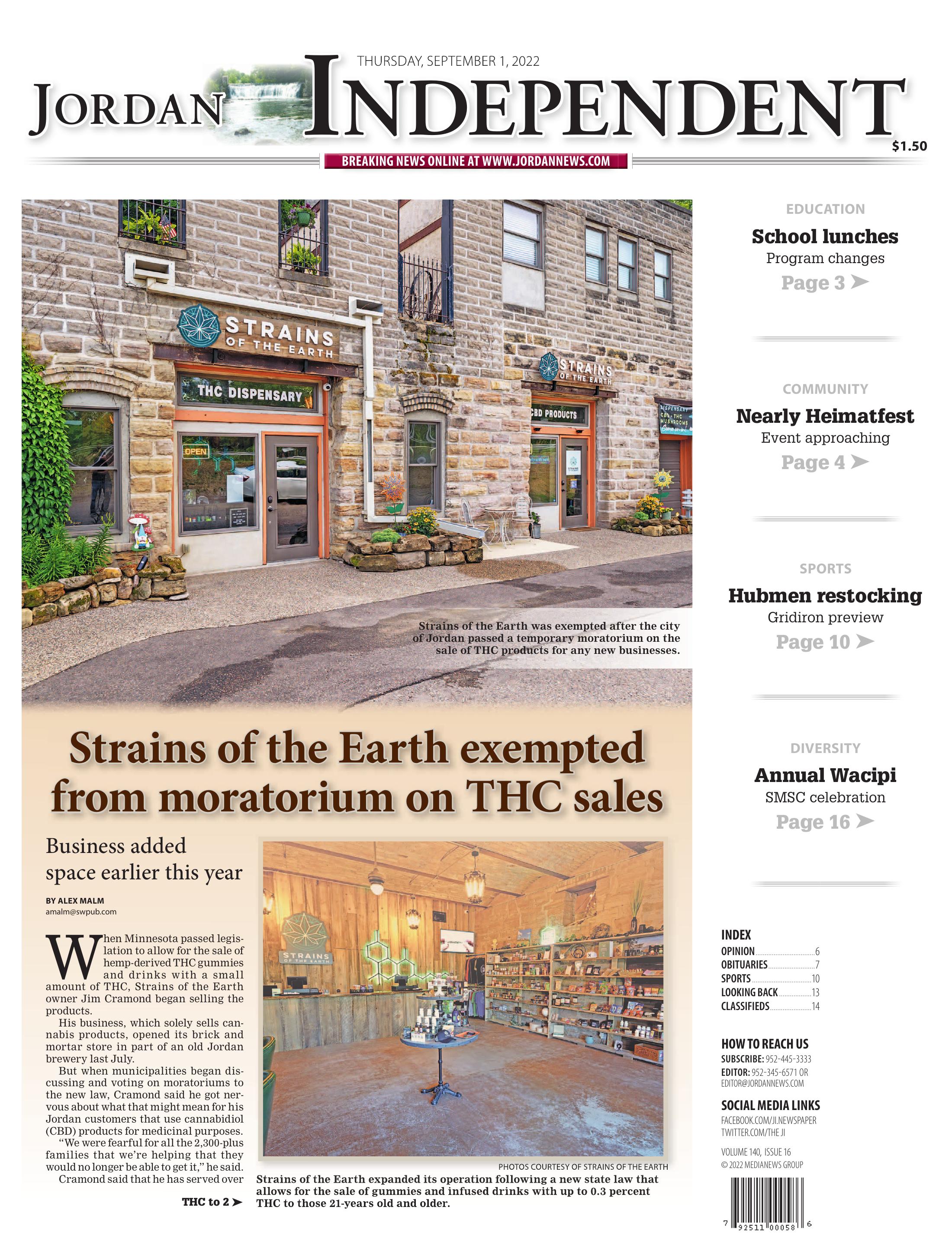 Strains of the Earth was exempted after the city of Jordan passed a temporary moratorium on the sale of THC products for any new businesses.

Photos courtesy of Strains of the Earth

Strains of the Earth expanded its operation following a new state law that allows for the sale of gummies and infused drinks with up to 0.3 percent THC to those 21-years old and older.

Strains of the Earth founder Jim Cramond pictured earlier this year at the Jordan business.

Strains of the Earth founder Jim Cramond pictured earlier this year at the Jordan business.

When Minnesota passed legislation to allow for the sale of hemp-derived THC gummies and drinks with a small amount of THC, Strains of the Earth owner Jim Cramond began selling the products.

His business, which solely sells cannabis products, opened its brick and mortar store in part of an old Jordan brewery last July.

But when municipalities began discussing and voting on moratoriums to the new law, Cramond said he got nervous about what that might mean for his Jordan customers that use cannabidiol (CBD) products for medicinal purposes.

“We were fearful for all the 2,300-plus families that we’re helping that they would no longer be able to get it,” he said.

Cramond said that he has served over 23,000 people who live in Minnesota since he opened his online business in 2018.

AN EXEMPTIONOn Aug. 16, the Jordan City Council voted to put a one-year moratorium on the sale of THC products while the city works to come up with rules and regulations for how the products can be sold in the community.

Jordan City Administrator Tom Nikunen said that before the council formally considered taking any action, city staff sent a letter to different businesses, including gas stations and liquor stores that are already selling tobacco products, to see if they were also selling the THC products.

Nikunen said they only heard back from Cramond, who asked for an exemption to the moratorium.

At first, it wasn’t certain if the moratorium would allow for any business to be exempted. On Monday, Nikunen said that they left it up to the council to debate.

In a letter to the City Council, Cramond explained that once the new state law went into effect, he “invested everything into expanding next door.”

After hearing from Cramond and fielding other testimony, the council decided to allow Strains of the Earth to continue to sell THC products.

“If you were to stop business as usual for me (it) would be detrimental, possibly forcing me to close,” Cramond said at the end of his letter.

Surrounding communities have put in moratoriums, including Prior Lake and Shakopee. Scott County townships may know their fate regarding a moratorium on the sale of THC products on Sept. 6 when county commissioners are expected to vote on the issue. The city of Savage is expected to have a discussion on Sept. 12.

MISCONCEPTIONSFor years, Cramond said he has focused on educating people on what cannabis products are and how they can have a positive impact in a number of medicinal ways.

Misconceptions are a reason why so many cities across the state have opted for moratoriums, Cramond said. “The massive misconception with THC that exists out there almost puts cities in a panic,” he said.

Cramond said that because municipalities are struggling to figure out what to do, it’s an example of why continuing to educate people about cannabis products is so important.

‘TAKING BACK CONTROL’Cramond said he sees the new state legislation as a way for the state to take back control over what cannabinoid products can be sold and how.

“Really what happened was the state taking back control of the 2018 Farm Bill,” he said.

In 2018, what is commonly known as the Farm Bill passed Congress, allowing the sale of hemp-derived products with less than 0.3 percent THC.

“I feel that cities are going to put in a mandatory application process for the sale of THC products,” he said.

Cramond said that he is in support of an application process, noting that he expects he would have to apply just like everyone else in order to sell THC products in the city of Jordan.

But as Cramond sees it there aren’t any guarantees he will be allowed to continue to sell his products once local regulations are put in place. “I will have to go through that same application process as everyone else,” he said.

For now, Cramond said he is grateful that his business will be able to continue to operate for now. “We’re very very thankful,” he said.