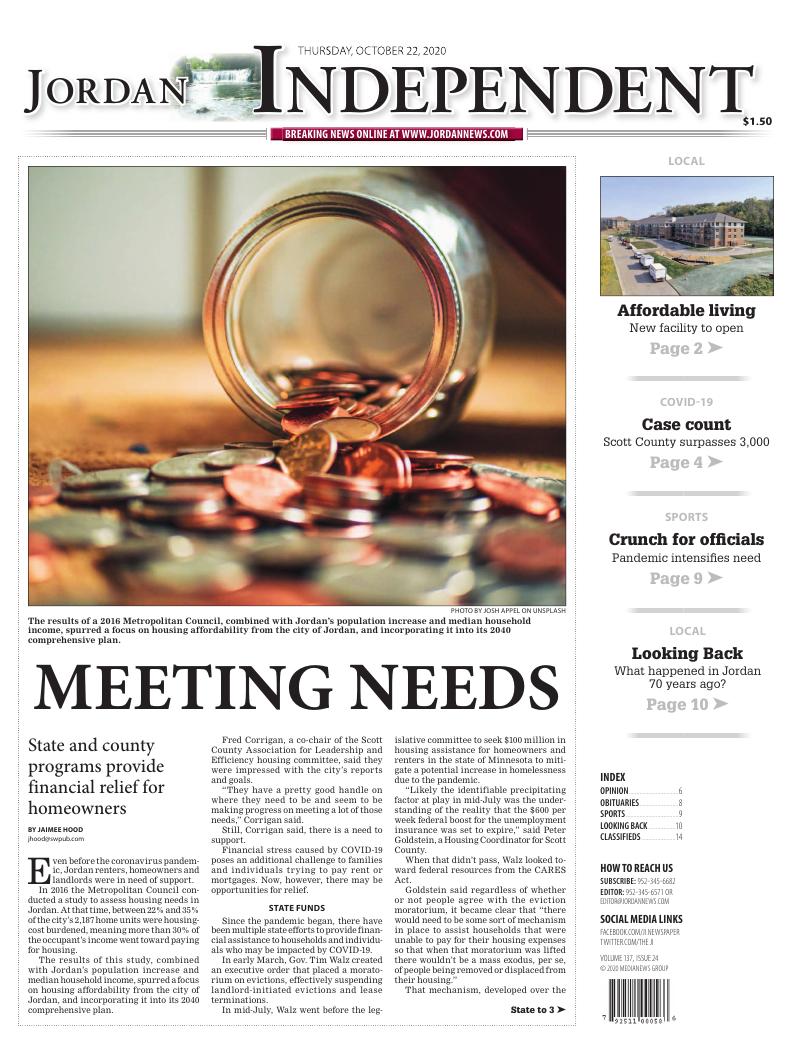 Financial stress caused by COVID-19 poses an additional challenge to families and individuals trying to pay rent or mortgages. Now, however, there may be opportunities for relief.

Even before the coronavirus pandemic, Jordan renters, homeowners and landlords were in need of support.

In 2016 the Metropolitan Council conducted a study to assess housing needs in Jordan. At that time, between 22% and 35% of the city’s 2,187 home units were housing-cost burdened, meaning more than 30% of the occupant’s income went toward paying for housing.

The results of this study, combined with Jordan’s population increase and median household income, spurred a focus on housing affordability from the city of Jordan, and incorporating it into its 2040 comprehensive plan.

Fred Corrigan, a co-chair of the Scott County Association for Leadership and Efficiency housing committee, said they were impressed with the city’s reports and goals.

“They have a pretty good handle on where they need to be and seem to be making progress on meeting a lot of those needs,” Corrigan said.

Still, Corrigan said, there is a need to support.

Financial stress caused by COVID-19 poses an additional challenge to families and individuals trying to pay rent or mortgages. Now, however, there may be opportunities for relief.

Since the pandemic began, there have been multiple state efforts to provide financial assistance to households and individuals who may be impacted by COVID-19.

In mid-July, Walz went before the legislative committee to seek $100 million in housing assistance for homeowners and renters in the state of Minnesota to mitigate a potential increase in homelessness due to the pandemic.

“Likely the identifiable precipitating factor at play in mid-July was the understanding of the reality that the $600 per week federal boost for the unemployment insurance was set to expire,” said Peter Goldstein, a Housing Coordinator for Scott County.

When that didn’t pass, Walz looked toward federal resources from the CARES Act.

Goldstein said regardless of whether or not people agree with the eviction moratorium, it became clear that “there would need to be some sort of mechanism in place to assist households that were unable to pay for their housing expenses so that when that moratorium was lifted there wouldn’t be a mass exodus, per se, of people being removed or displaced from their housing.”

That mechanism, developed over the summer and launched in late August, is the COVID-19 Housing Assistance Program, or CHAP.

In order to be eligible for CHAP assistance, Goldstein said homeowners must be either a renter or homeowner with an income at or below three times the federal poverty guideline, though there is a preference for those under two times the guideline. Additionally, there needs to be an eligible, COVID-19 related expense incurred between March 1 and Dec. 31, 2020. Eligible expenses would include, for example, unemployment, or a long hospital stay that reduced family income.

At the local level, a number of nonprofit organizations including the Salvation Army help distribute CARES funds to eligible applicants through the CHAP program.

Scott County has allocated some of its CARES funds to provide relief to residents who may not be income eligible for the statewide CHAP program, said Julie Siegert, Housing Director for the Scott County Community Development Agency.

“The housing market is already tight with a low vacancy rate and high competition for homes selling on the market,” Siegert said. “So the hope would be that these funds. . . could be used to help those who were current on their housing cost prior to the pandemic ... remain in their homes by taking care of those past-due amounts that, but for the pandemic, would in all likelihood not have occurred.”

The deadline to apply for county funding is Nov. 15. More information can be found at bit.ly/36cJR3V.

While Corrigan agreed, he is concerned that residents aren’t aware of the resources available to them. Not only is there a financial impact for individual households, but a sort of domino effect is at play. SCALE’s countywide housing committee wants to prevent that domino effect as much as possible.

“One of the goals...is to protect the housing inventory that we have,” said Corrigan. “This becomes a self-fulfilling nightmare when the rent can’t be paid, and the landlord can’t pay his mortgage and that landlord may be forced to sell a home that currently is available for rent. That’s kind of the waterfall, especially if somebody gets to the point of being homeless.”

Once homelessness becomes the issue, it becomes more difficult to get connected with help, said Corrigan. The LLE housing committee wants to use their current resources to prevent evictions and keep people in their homes as much as possible.

“The county’s really put a focus on housing, and I think I can say that because of this work, the county is in a very good position today,” Corrigan said.

Corrigan is also encouraged by the local response to the housing initiative.

“I’ll use the word ‘sophisticated,’” Corrigan said. “Their reports indicate a real understanding of the issues and challenges. Had we not had this effort, it would have been a lot harder to get this program up and running.” 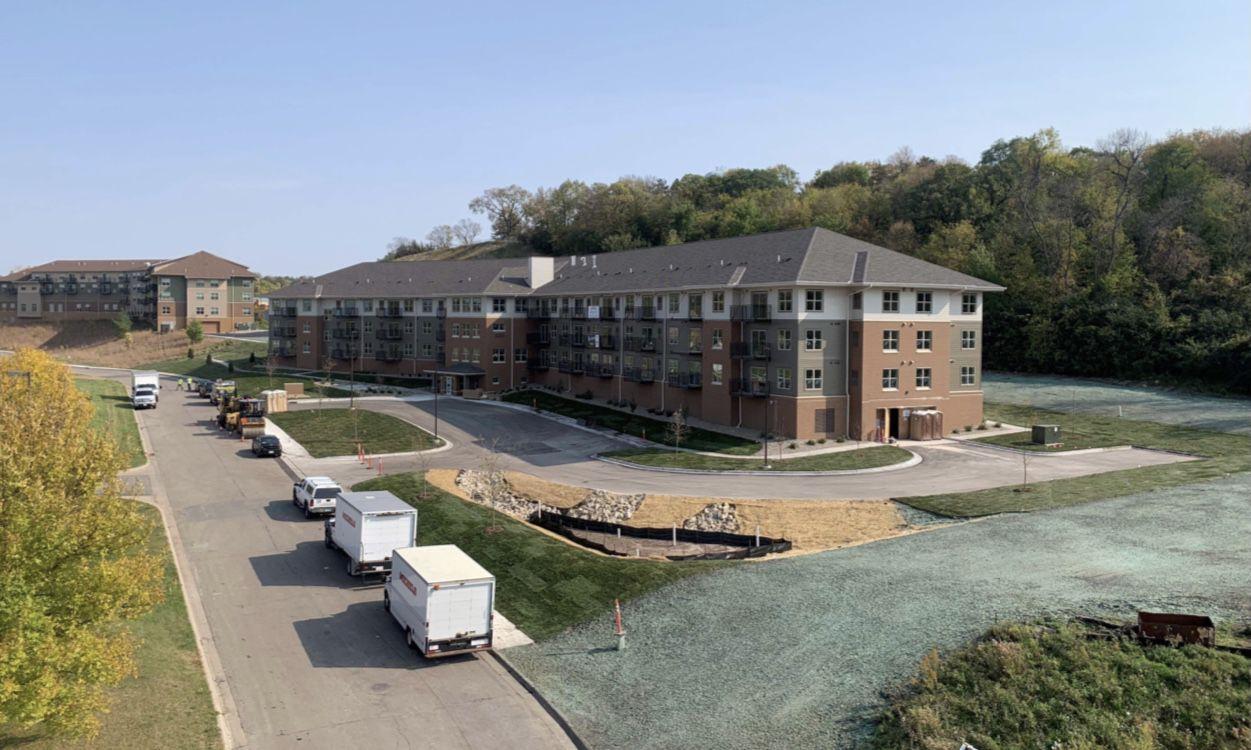 Senior Director of Property Management Lorien Mueller said Brentwood Terrace is a market rate property, meaning there is no subsidized rent or tax credits. But it may provide a more affordable option to seniors who would not necessarily be approved for housing assistance, but still want to stay in Jordan. 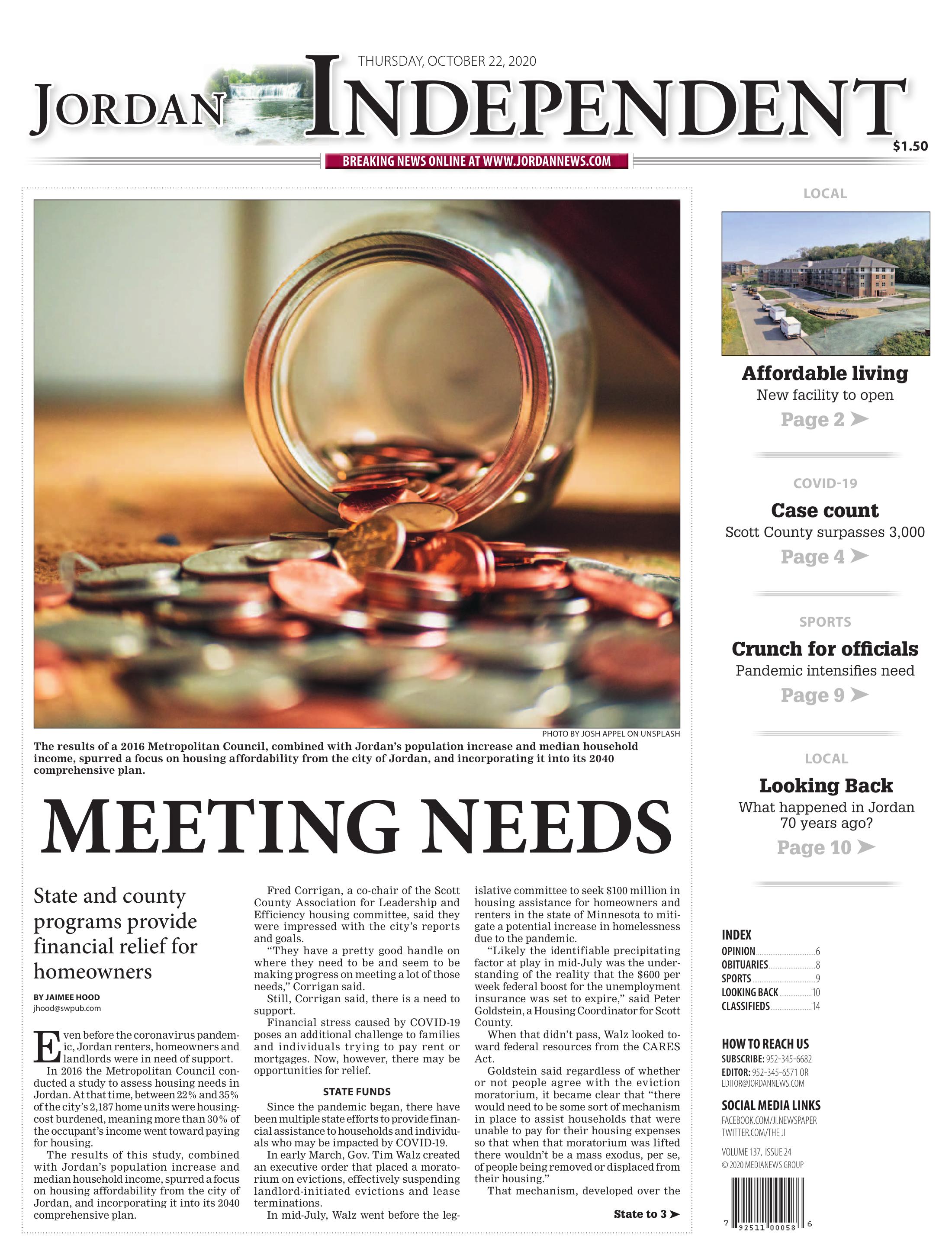