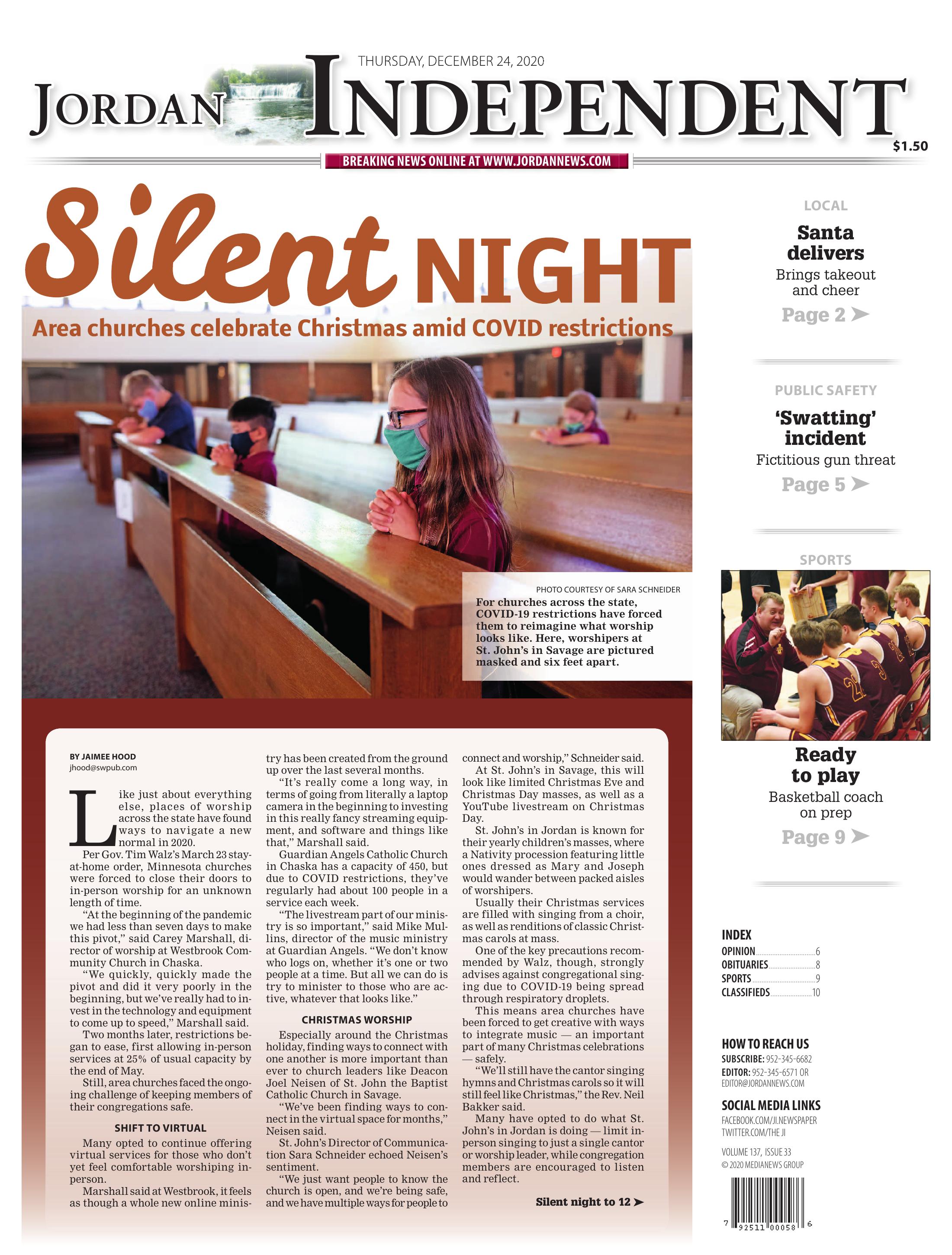 For churches across the state, COVID-19 restrictions have forced them to reimagine what worship looks like. Here, worshipers at St. John’s in Savage are pictured masked and six feet apart.

Mullins said the choir at Guardian Angels is usually able to perform “some robust music” at Christmas mass with a full choir. However, due to COVID-19 restrictions, they had to improvise and modify in 2020.

Mike Mullins, director of the music ministry at Guardian Angels Catholic Church in Chaska, bought 10 plexiglass dividers and used them to create boxes around each performer. The idea of the box design is so performers are protected from each other and the congregation is protected from performers.

In addition to the plexiglass dividers, some of the musicians at Guardian Angels Catholic Church services will have covers on their instruments to slow aerosols from spreading while they play.

Like just about everything else, places of worship across the state have found ways to navigate a new normal in 2020.

Per Gov. Tim Walz’s March 23 stay-at-home order, Minnesota churches were forced to close their doors to in-person worship for an unknown length of time.

“At the beginning of the pandemic we had less than seven days to make this pivot,” said Carey Marshall, director of worship at Westbrook Community Church in Chaska.

“We quickly, quickly made the pivot and did it very poorly in the beginning, but we’ve really had to invest in the technology and equipment to come up to speed,” Marshall said.

Two months later, restrictions began to ease, first allowing in-person services at 25% of usual capacity by the end of May.

Many opted to continue offering virtual services for those who don’t yet feel comfortable worshiping in-person.

Marshall said at Westbrook, it feels as though a whole new online ministry has been created from the ground up over the last several months.

“It’s really come a long way, in terms of going from literally a laptop camera in the beginning to investing in this really fancy streaming equipment, and software and things like that,” Marshall said.

Guardian Angels Catholic Church in Chaska has a capacity of 450, but due to COVID restrictions, they’ve regularly had about 100 people in a service each week.

“The livestream part of our ministry is so important,” said Mike Mullins, director of the music ministry at Guardian Angels. “We don’t know who logs on, whether it’s one or two people at a time. But all we can do is try to minister to those who are active, whatever that looks like.”

Especially around the Christmas holiday, finding ways to connect with one another is more important than ever to church leaders like Deacon Joel Neisen of St. John the Baptist Catholic Church in Savage.

“We’ve been finding ways to connect in the virtual space for months,” Neisen said.

“We just want people to know the church is open, and we’re being safe, and we have multiple ways for people to connect and worship,” Schneider said.

St. John’s in Jordan is known for their yearly children’s masses, where a Nativity procession featuring little ones dressed as Mary and Joseph would wander between packed aisles of worshipers.

Usually their Christmas services are filled with singing from a choir, as well as renditions of classic Christmas carols at mass.

One of the key precautions recommended by Walz, though, strongly advises against congregational singing due to COVID-19 being spread through respiratory droplets.

This means area churches have been forced to get creative with ways to integrate music — an important part of many Christmas celebrations — safely.

“We’ll still have the cantor singing hymns and Christmas carols so it will still feel like Christmas,” the Rev. Neil Bakker said.

Many have opted to do what St. John’s in Jordan is doing — limit in-person singing to just a single cantor or worship leader, while congregation members are encouraged to listen and reflect.

Some, like Mullins, have gotten creative in the pursuit of modified Christmas worship.

Earlier in the fall, Mullins was hopeful Guardian Angels would be able to maintain its tradition of a full Christmas choir. However, as case numbers continued to rise, it became evident this would not be safely possible, even with social distancing precautions.

“A speaking person would be expelling aerosols out about six feet,” Mullins said. “It’s well understood that when you’re singing, because of the more forceful expression of exhaling, that’s more like 12-15 feet.”

The first row of seating was too close to where the choir would be. Mullins said he knew his primary responsibility as a minister was to protect the congregation from undue harm by not closely exposing them to the aerosols of choir members. Next, he began to devise a plan.

Mullins constructed plexiglass barriers to go in between a handful of musicians — a trumpeter, a cellist and a flautist — who will play at Christmas mass.

He and his wife and their daughter, who also happen to be vocalists, will sing behind the plexiglass barriers, too, making up a partial choir.

Though things will look different, Mullins said he believes the pandemic has allowed many Catholics to be more creative in their worship.

“The Catholic mass is partially based on a very strong belief in the presence of Jesus in the Eucharist,” Mullins said. “People that are watching from home can’t participate in communion in the same way, so we have a prayer that recognizes virtual communion. In other words you’re receiving Jesus in your heart, in place of the host. And so we do our best.”

“We’re working really hard to adapt and stay open in the midst of it all,” said Bakker.

Despite the challenges of pulling off a celebration for an important holiday during a pandemic, to these area church leaders, it’s worth the effort.

Marshall says though the typical Christmas traditions like caroling and choirs are valued, for her, it’s more about the connection the holiday brings.

“Because we’re so isolated, being together, whether that’s an online forum or in-person, just bonding together and supporting one another. . . is especially important right now,” said Marshall. “It’s very important for us to feel connected.”

“There’s a philosopher that says you never step in the same river twice,” said Bakker. “The rivers are always moving and changing but something of continuity that connects us back to our faith. And that’s the church at this time of year.”

The tradition of coming together at Christmas provides a connection point for church members to remember the hope their faith brings, Bakker said.

“Even though we struggle on earth and have this hard time on earth where we go through sickness and COVID and all the other bad things we go through, we still have a king that has conquered it all,” Bakker said. “So that’s really our source of hope at the end of the day.”

After a year of changes, challenges and restrictions, Christmas is a time to re-incorporate some normalcy, Marshall said.

“I think it’s for us to, you know, continue as much as we can, the traditions that we’re used to,” said Marshall. “I think that going to church or doing whatever it is your family does for Christmas is very important just to keep the normalcy.” 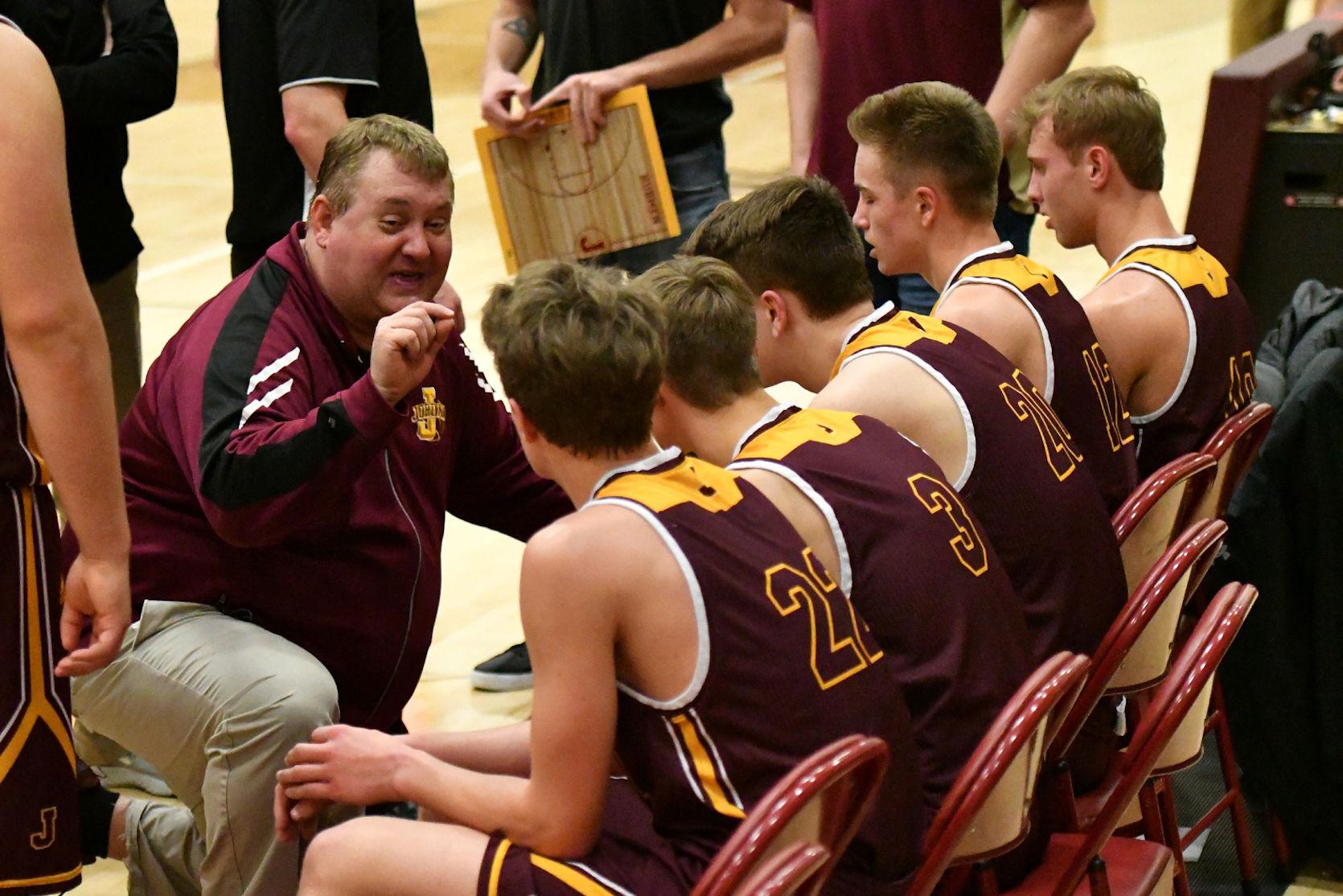