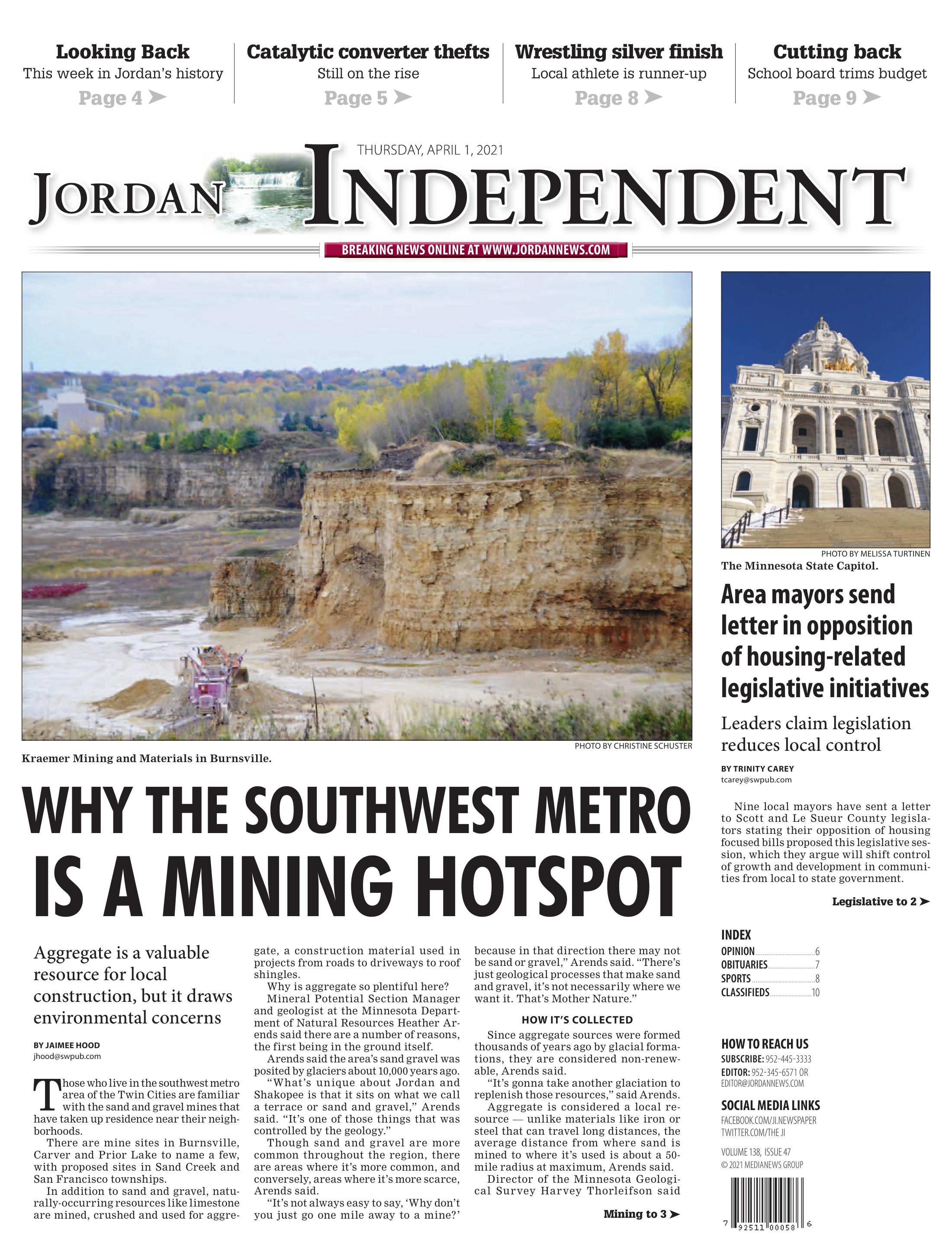 Those who live in the southwest metro area of the Twin Cities are familiar with the sand and gravel mines that have taken up residence near their neighborhoods.

There are mine sites in Burnsville, Carver and Prior Lake to name a few, with proposed sites in Sand Creek and San Francisco townships.

In addition to sand and gravel, naturally-occurring resources like limestone are mined, crushed and used for aggregate, a construction material used in projects from roads to driveways to roof shingles.

Why is aggregate so plentiful here?

Mineral Potential Section Manager and geologist at the Minnesota Department of Natural Resources Heather Arends said there are a number of reasons, the first being in the ground itself.

Arends said the area’s sand gravel was posited by glaciers about 10,000 years ago.

“What’s unique about Jordan and Shakopee is that it sits on what we call a terrace or sand and gravel,” Arends said. “It’s one of those things that was controlled by the geology.”

“It’s not always easy to say, ‘Why don’t you just go one mile away to a mine?’ because in that direction there may not be sand or gravel,” Arends said. “There’s just geological processes that make sand and gravel, it’s not necessarily where we want it. That’s Mother Nature.”

Since aggregate sources were formed thousands of years ago by glacial formations, they are considered non-renewable, Arends said.

Aggregate is considered a local resource — unlike materials like iron or steel that can travel long distances, the average distance from where sand is mined to where it’s used is about a 50-mile radius at maximum, Arends said.

Director of the Minnesota Geological Survey Harvey Thorleifson said knowledge about where these deposits are is gathered through compiling what local drillers know about the land as well as surveys done by the DNR.

The Minnesota Geological Survey adds to knowledge about the deposits and creates maps to clarify the suitability of materials.

“Information is maintained in multiple places, so if there’s a demand we know where opportunity exists,” said Thorleifson.

Though aggregate is a valuable resource for local construction, it does produce some environmental concerns for the neighbors of local mines.

Roger Walsh recently bought a home in San Francisco Township with the hope it would be a quiet, serene respite for his family.

Just a couple of years after moving in, he’s less-than-enthused about the possibility of a new mine proposed by Ron Olson Construction just across the street.

He and some of his neighbors are worried about the increased noise levels the mine could create, as well as a significant increase in traffic on narrow gravel roads.

They also want to know what would happen when the operation is done — whether a gaping hole will be left in the ground, and whether there will be lasting environmental effects.

“I’m not against having a mine, just not here in the middle of an established residential area,” said Walsh.

Herb Baldwin, a resident of Sand Creek Township and retired U.S. Army Signal Corp Captain, learned how to “read” aerial maps for national security purposes — and when he sees an aerial map of the proposed mine not too far from his home, it raises some concerns about potential effects on the local environment.

Arends said addressing these concerns is part of the environmental review process, which is taken on by the area (city or township) where the mine is proposed and by the proposer.

Still, during that process, in the waiting period for approval or denial of a land use permit for a given plot of land, community members like Walsh and Baldwin can feel like they are left in the dark.

John Rivisto is the vice president of Kraemer Mining and Materials, Inc., which has had its site in Burnsville for over 60 years.

Still, he said, the company receives some concerns from community members about water quality, blasting, dust and other environmental concerns similar to those Walsh and Baldwin would like to have addressed.

“Most of the time it’s concerned neighbors and they’re concerned for the right reasons,” Rivisto said. “They’re not going to stand in opposition if they know that this is going to be mined appropriately.”

But Kraemer has made it a priority to respond to what Rivisto says are often valid concerns rather than ignoring them.

“You can’t put your head in the sand and hope they’ll go away, because they won’t,” Rivisto said.

Instead, Rivisto said, Kraemer tries to provide individual education when concerns come up.

He also pointed out that as part of the environmental review process proposers are required to share a plan of reclamation so an “ugly scar” won’t be left in the earth once all the resources at that site have been used.

However, Arends said there are both “good” and “bad” ways aggregate has been harvested — and community has been involved and informed throughout the process — across the state.

“We are providing a necessary material that all of us use and need, but it doesn’t give us carte blanche to abuse what we do because we’re providing something that’s needed,” said Rivisto. “We have to do it the right way.”

"We are providing a necessary material that all of us use and need, but it doesn't give us carte blanche to abuse what we do because we're providing something that's needed."

Nine local mayors have sent a letter to Scott and Le Sueur County legislators stating their opposition of housing focused bills proposed this legislative session, which they argue will shift control of growth and development in communities from local to state government.

The legislative proposals opposed in the letter are SF915, SF914, SF801 and HF1085. Proponents of the legislation say the initiatives will increase home affordability.

“They’re all about reducing local control, taking decisions away from the cities, away from planning commissions, putting it up at the state level, and also limiting or curtailing certain fees on cities,” Briggs said. “What the impact of that is, it will add cost to the citizens. Just because you reduce the fee doesn’t eliminate a cost. As a matter of fact, it transfers that cost.”

In his testimony Wedel noted that city comprehensive plans already designate portions of the city for such zoning.

“What this bill does is jeopardizes residents who have already purchased homes in our community and expect similar homes to be constructed around them consistent with the city’s comprehensive and zoning plans,” he said. “To suggest this change in land use after they have already made what is likely the single biggest investment they will ever make is not transparent nor equitable.”

Terry stated that legislative mandates and restrictions on cities were not necessary for local municipalities to bring a variety of housing opportunities to communities.

The letter sent to legislators states proponents of the legislation’s “affordability narrative is false. It lacks data, credibility, and seeing any of these legislative proposals into law would serve to raise taxes on our existing citizens!”

One recipient of the letter was District 55 State Sen. Eric Pratt, R-Prior Lake who said it’s an issue of balancing competing needs.

“I think it’s balancing the needs of a growing community with the needs to make sure that the growing community has its cost of development covered and that those decisions are made locally,” Pratt said, adding that home affordability needed to be looked at as a whole.

“One of the things we try to do in the Senate is make sure that we take the feedback from stakeholders on both sides of an issue and what I hear in these letters is that the city officials don’t feel like they’ve had an opportunity to be heard and so this is a bill that probably requires a little extra work,” Pratt said.