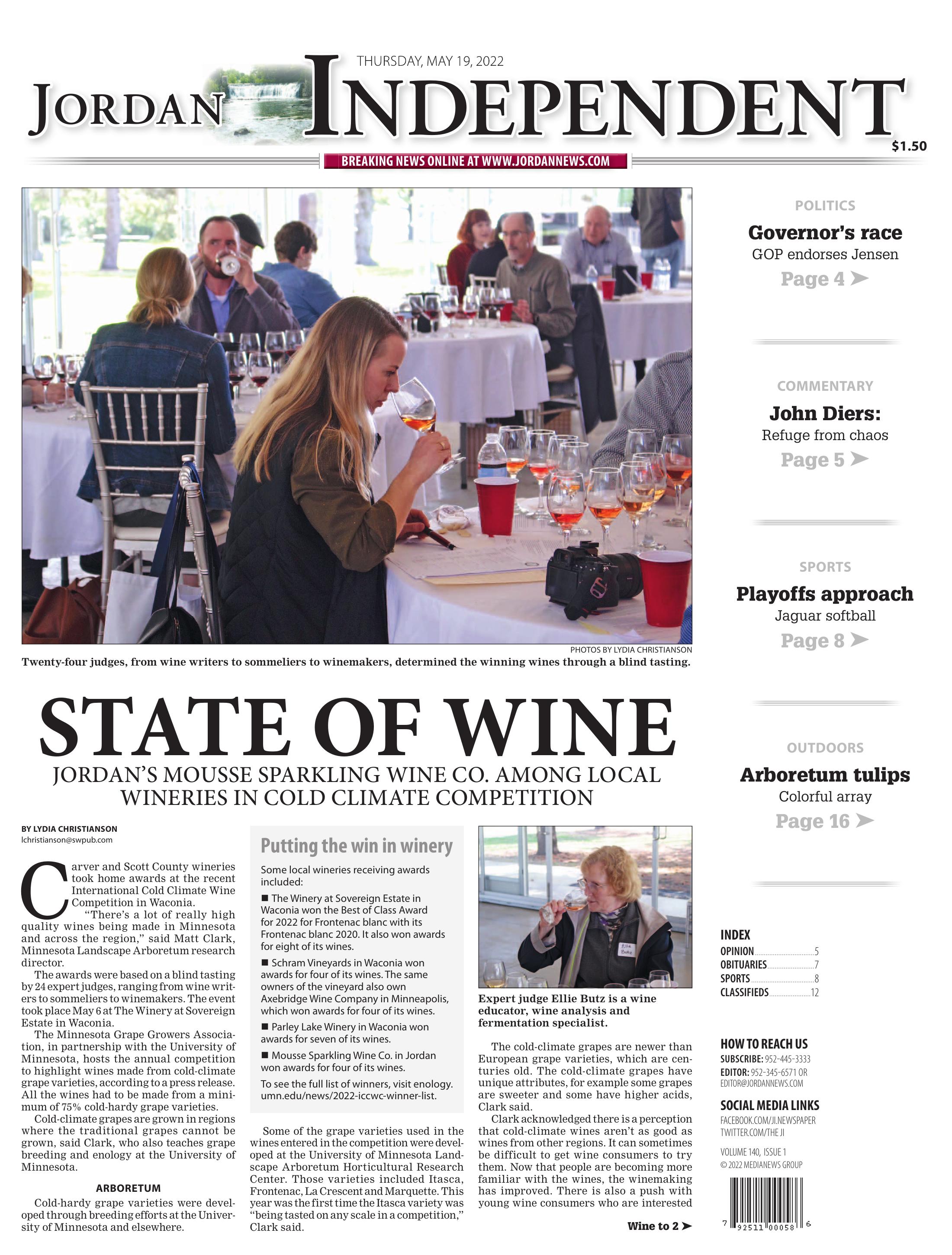 Twenty-four judges, from wine writers to sommeliers to winemakers, determined the winning wines through a blind tasting.

There were 328 wine entries in this year’s competition and 55 wineries participated.

Judge John Thull, a research viticulturist at the Minnesota Landscape Arboretum, swirls a glass of wine during a tasting.

“There’s a lot of really high quality wines being made in Minnesota and across the region,” said Matt Clark, Minnesota Landscape Arboretum research director.

The awards were based on a blind tasting by 24 expert judges, ranging from wine writers to sommeliers to winemakers. The event took place May 6 at The Winery at Sovereign Estate in Waconia.

The Minnesota Grape Growers Association, in partnership with the University of Minnesota, hosts the annual competition to highlight wines made from cold-climate grape varieties, according to a press release. All the wines had to be made from a minimum of 75% cold-hardy grape varieties.

Cold-climate grapes are grown in regions where the traditional grapes cannot be grown, said Clark, who also teaches grape breeding and enology at the University of Minnesota.

Cold-hardy grape varieties were developed through breeding efforts at the University of Minnesota and elsewhere.

Some of the grape varieties used in the wines entered in the competition were developed at the University of Minnesota Landscape Arboretum Horticultural Research Center. Those varieties included Itasca, Frontenac, La Crescent and Marquette. This year was the first time the Itasca variety was “being tasted on any scale in a competition,” Clark said.

Clark acknowledged there is a perception that cold-climate wines aren’t as good as wines from other regions. It can sometimes be difficult to get wine consumers to try them. Now that people are becoming more familiar with the wines, the winemaking has improved. There is also a push with young wine consumers who are interested in locally produced wines, he said.

The cold-climate wine market is maturing and people are coming in and starting vineyards and wineries, Clark said. He sees now as an exciting time for cold-climate wines because of the interest people have in eating and drinking products for where they live.

The competition is a fun way to showcase wines from the region and across the country, Clark said. When wineries win awards, it’s a way for them to promote their wines and show that other people enjoy what they’re producing.

“We’re kind of capturing what wines can do in cold climates with this competition,” Clark said.

There were 328 wine entries in this year’s competition and 55 wineries participated. Wineries from at least 10 states and Canada entered the competition. Local wineries that participated in the competition include The Winery at Sovereign Estate, Parley Lake Winery and Schram Vineyards, all of which are in Waconia and Mousse Sparkling Wine Co. in Jordan.

One of the greatest things about local wine is that people can get out of the city and explore what Minnesota has to offer, Clark said. There are many wonderful places in the Midwest where people can enjoy an afternoon and taste wines without having to get on a plane to California or France, he added.

“Every winery has their own unique story to tell,” Clark said.

Wineries are a great place to gather and host events. Weddings are a big business for wineries, said George Martin, a Minnesota Grape Growers Association board member and chair of this year’s competition. When it comes to the “social community level, wineries offer us something positive,” he added.

There are some advantages to growing grapes in colder climates, Martin said. Even though it is a shorter growing season, the longer days ensure that the grapes are exposed to the sun for many hours in July and August. Come August and September, winery owners are already looking at when they’re going to pick their grapes, he said.

“What’s happening is the winemakers are getting just better and better at making cold hardy wines,” Martin said.

Putting the win in winery

To see the full list of winners, visit enology.umn.edu/news/2022-iccwc-winner-list.

“What's happening is the winemakers are getting just better and better at making cold hardy wines."