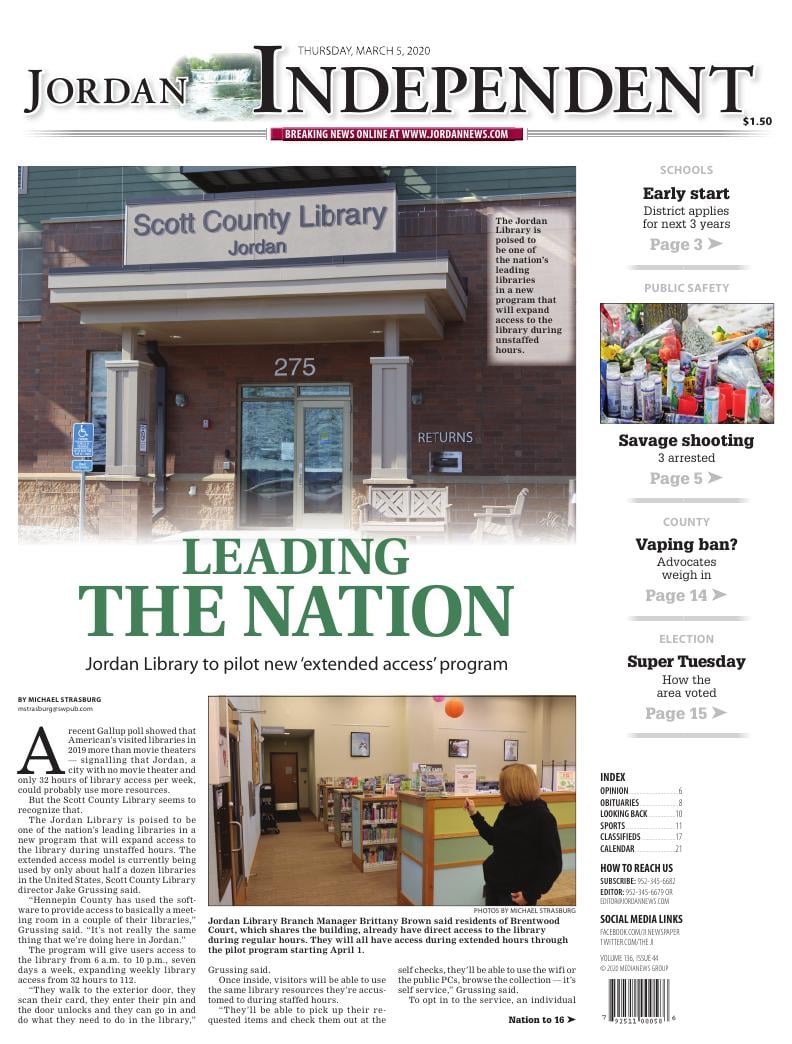 Jordan Library Branch Manager Brittany Brown said residents of Brentwood Court, which shares the building, already have direct access to the library during regular hours. They will all have access during extended hours through the pilot program starting April 1.

The Jordan Library is poised to be one of the nation’s leading libraries in a new program that will expand access to the library during unstaffed hours.

A pilot program, open to 50 participants and all residents of Brentwood Court, is

set to begin April 1 at the Jordan Library.

Jordan Library Manager Brittany Brown demonstrates how users will enter the library after hours with their library card and PIN number.

The program will give users access to the library from 6 a.m. to 10 p.m., seven days a week, expanding weekly library access from 32 hours to 112.

A recent Gallup poll showed that American’s visited libraries in 2019 more than movie theaters — signalling that Jordan, a city with no movie theater and only 32 hours of library access per week, could probably use more resources.

But the Scott County Library seems to recognize that.

The Jordan Library is poised to be one of the nation’s leading libraries in a new program that will expand access to the library during unstaffed hours. The extended access model is currently being used by only about half a dozen libraries in the United States, Scott County Library director Jake Grussing said.

“Hennepin County has used the software to provide access to basically a meeting room in a couple of their libraries,” Grussing said. “It’s not really the same thing that we’re doing here in Jordan.”

The program will give users access to the library from 6 a.m. to 10 p.m., seven days a week, expanding weekly library access from 32 hours to 112.

“They walk to the exterior door, they scan their card, they enter their pin and the door unlocks and they can go in and do what they need to do in the library,” Grussing said.

Once inside, visitors will be able to use the same library resources they’re accustomed to during staffed hours.

“They’ll be able to pick up their requested items and check them out at the self checks, they’ll be able to use the wifi or the public PCs, browse the collection — it’s self service,” Grussing said.

To opt in to the service, an individual needs to be a Scott County Library cardholder, at least 16 years old and sign the program’s terms of service.

The Jordan Library was chosen to participate in this program because the building doesn’t require heavy modifications, it presents easy access for residents of the senior housing in Brentwood Court and, ultimately, the Jordan community is relatively underserved when it comes to library access.

Grussing said rural libraries throughout Minnesota are consistently open 45-55 hours a week, citing his hometown of Morris, which — with a population of about 5,300 — counts 50 hours of library access per week.

“We know that adding additional staff to increase the open hours wasn’t an option for us at this point, so we wanted to try something to get people access to the library and see if it would work,” Grussing said.

First-year licensing and hardware installation costs will be about $15,000. After that, annual licensing fees will cost $12,000.

“If you compare it to hiring two full-time positions to provide that 80 hours of access it’s a much more cost effective way of providing that,” Grussing said.

A pilot program, open to 50 participants and all residents of Brentwood Court, is set to begin April 1. Grussing said the pilot program will focus more on analyzing usage patterns and user feedback rather than putting the system through its paces.

“Although this vendor solution is relatively limited in its use in the United States, there are 850 libraries worldwide that use it, so I’m not real concerned about if the system is going to work,” Grussing said. “We want to test the settings we have but also see when people are coming in and if we got this right ... we’re really going to be asking those 50 participants to be very candid with us in their feedback.”

The pilot program is expected to last three to six months.

“If after three months we see it’s working well, we’ll open it up to a wider audience,” Grussing said.

This positions Jordan as a testing ground for possible expansion of the program to other Scott County libraries. Grussing singled out Belle Plaine and Elko New Market as other communities that stand to benefit the most from extended access. 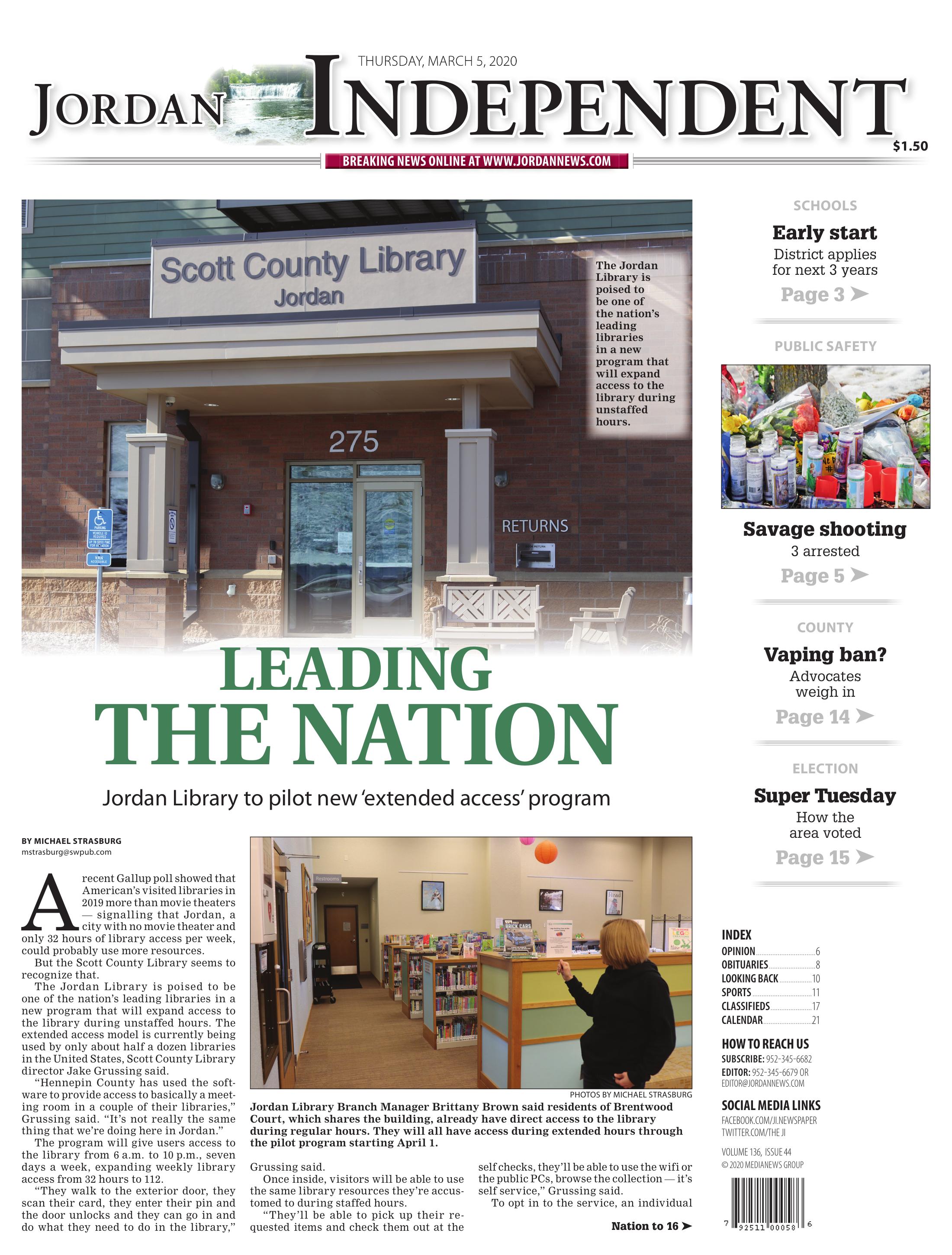