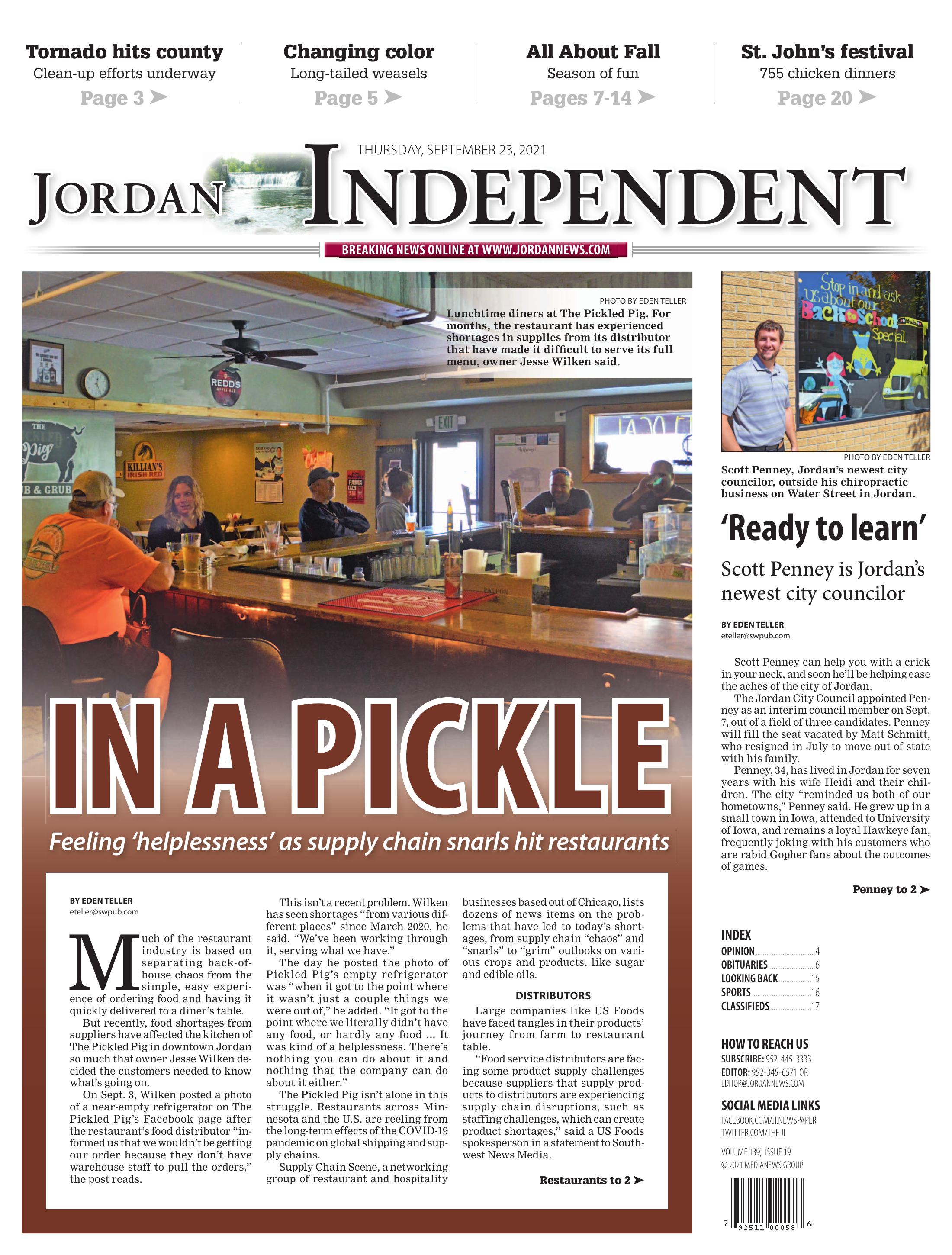 Lunchtime diners at The Pickled Pig. For months, the restaurant has experienced shortages in supplies from its distributor that have made it difficult to serve its full menu, owner Jesse Wilken said.

Window art at The Pickled Pig urges passersby to support local businesses. The restaurant has experienced fewer meat-related shortages because it sources many of its cuts from local butcher Pekarna Meats, owner Jesse Wilken said.

Much of the restaurant industry is based on separating back-of-house chaos from the simple, easy experience of ordering food and having it quickly delivered to a diner's table.

But recently, food shortages from suppliers have affected the kitchen of The Pickled Pig in downtown Jordan so much that owner Jesse Wilken decided the customers needed to know what's going on.

On Sept. 3, Wilken posted a photo of a near-empty refrigerator on The Pickled Pig's Facebook page after the restaurant's food distributor "informed us that we wouldn't be getting our order because they don't have warehouse staff to pull the orders," the post reads.

This isn't a recent problem. Wilken has seen shortages “from various different places” since March 2020, he said. “We’ve been working through it, serving what we have."

The Pickled Pig isn't alone in this struggle. Restaurants across Minnesota and the U.S. are reeling from the long-term effects of the COVID-19 pandemic on global shipping and supply chains.

Supply Chain Scene, a networking group of restaurant and hospitality businesses based out of Chicago, lists dozens of news items on the problems that have led to today's shortages, from supply chain “chaos” and “snarls” to “grim” outlooks on various crops and products, like sugar and edible oils.

Large companies like US Foods have faced tangles in their products' journey from farm to restaurant table.

All of the disruptions and delays have “definitely had some impact on business,” Wilken said. “It’s difficult when we have to change from our norm.”

He's lucky when it comes to meats: Pickled Pig sources many of its cuts from Pekarna Meat Market just down the street. With fewer steps along the supply chain, that local source has stayed consistent in its products and delivery.

“That’s been helpful with eliminating a lot of those shortages,” Wilken said.

It's not just food that's falling through the cracks, though. Wilken has had trouble getting liquor and beer behind the bar, too.

With food, Wilken has the option to switch distributors, though he doesn't want to − he values his relationship with his supplier's representative, and maintaining consistency in products from chicken wings to cooking oil is important to create a consistent product for loyal customers. For alcohol, because each specific liquor brand is sold through a different supplier, he doesn't have the choice to look elsewhere.

Wilken has also struggled to hire staff during an ongoing worker shortage, which was the tipping point for morning meals at The Pickled Pig. Compounded with shortages in food supplies, Wilken suspended breakfast service so the restaurant's chef wasn't working even more overtime.

“I’m sure those people are going elsewhere to get breakfast,” Wilken said. Still, he's thankful for the "great clientele" who have continued to return to The Pickled Pig for lunch and dinner.

“The biggest thing I want to tell people is thank you for continuing to support us through these times,” he said. “We’re not gonna make any drastic changes, we’re just working with what we’ve got.”

Scott Penney can help you with a crick in your neck, and soon he’ll be helping ease the aches of the city of Jordan.

The Jordan City Council appointed Penney as an interim council member on Sept. 7, out of a field of three candidates. Penney will fill the seat vacated by Matt Schmitt, who resigned in July to move out of state with his family.

Penney, 34, has lived in Jordan for seven years with his wife Heidi and their children. The city “reminded us both of our hometowns,” Penney said. He grew up in a small town in Iowa, attended to University of Iowa, and remains a loyal Hawkeye fan, frequently joking with his customers who are rabid Gopher fans about the outcomes of games.

The Penneys moved their business, Penney Family Chiropractic, to its location at 209 Water St. in 2018.

“We just happened to be going to breakfast across the street and saw the (property available) sign on the door,” Penney recalled.

This will be Penney’s first public office, and he didn’t come up with the idea to apply for the open seat on his own. Instead, several community members suggested that he toss his hat in the ring, and then he talked the prospect over with his wife, Penney said.

He came around to the idea as he considered how his perspective − as a parent of four children, the oldest of whom just began kindergarten at Jordan Elementary school, and as a local business owner − could contribute to the council’s decisions.

“Myself and my family are very invested in what happens in this town,” he said. “I thought I had a lot to offer.”

His experience looking for commercial real estate in the city and his habit of shopping local whenever possible has contributed to one of Penney’s priorities as a leader. He noted that Jordan, flanked by wetlands and divided by highways, presents a challenge for shops or entrepreneurs looking for storefronts.

“In order to attract business, you’re going to have to get creative,” he said. “The more business we can have in town, the better. It helps everybody.”

As he looked ahead to his first City Council meeting on Sept. 20, he was excited to see how the city operates from a closer vantage point, Penney said.

“There will obviously be a learning curve,” he said, but “I’m ready to learn.”